St Basil Cathedral in Moscow and Tsar Ivan the Terrible

Ivan IV the Terrible (1530–84) was Grand Prince of Moscow and Tsar of Russia from 1547. His reign saw the completion of a cent­rally admin­istered Russian state and the creation of an em­p­ire that included non-Slav states.

Naturally the Tsar’s aim of military dom­inance over a central Russian state led to many conflicts. In the 1550s his armies defeated the indep­en­d­ent Tatar/Mongol khanates of Kazan and Ast­rakahn. This extended Mus­covy con­trol to the Urals in the east and the Cas­pian Sea in the south, creating a buffer zone against the Mon­gols. Ivan’s second goal was to gain access to the Baltic Sea. However this time he was not as successful in annexing Lith­uania and gain­ing sea access.

Ivan returned to a hero’s welcome in Moscow and to news that his wife gave him a son, though the infant soon died. In Kazan the Mus­lim popul­at­ion was expelled and Russian colonists were moved in, mosques were repl­ac­ed by Russian Orthodox churches and the Tartars of the surrounding country were pressed to convert to Christianity. 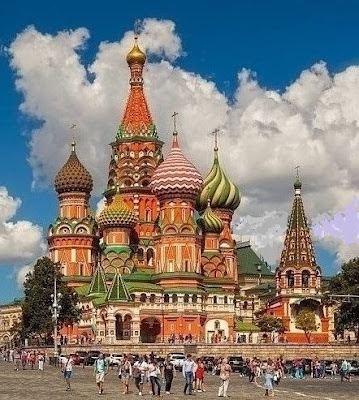 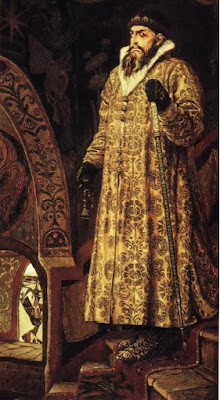 
St Basil was a votive off­er­ing, com­m­em­orat­ing the Rus­sian capture of  the Tatar capital, Kazar. The church was at first dedicated to the intercess­ion of the Virgin by the Moat, but it came to be known as the Cathedral of Vasily the Beat­ified/Basil the Blessed. Basil, a contemporary of Ivan the Terrible, was the peasant lad who became holy for Christ’s sake and who was buried in the church vaults.

In St Basil, western academic architectural concepts based on rat­ional harmony were ignored; the structure, with no clear design and many different ex­terior decor­ations, was a strangely medieval Russian form and decoration. No-one would ever confuse St Basil’s in Moscow with, for example, the romanesque Durham Cathedral, the gothic Notre-Dame de Paris or the baroque St Paul’s in Rome.

The flame-shaped roofs of St. Basil's Cathedral, which were said to be based on the colours describing heaven in the Book of Revel­at­ion, were probably not always as colourful as they are today. Before the 17th century, it's likely they were painted white, red and gold. 8 of the 9 domes built on the Cathedral represented the number of att­acks on Kazan, and were originally gold. Small renovations con­t­inued until the mid C19th when the domes were given their cur­rent bright colours and patterns. The 9th dome, the small one to one side, marks the sanctuary of Basil the Blessed.

This cathedral was a great example of the union of Byzantine and Asiatic cultural streams that characterised Muscovite culture. The inter-con­nected chapels, with their doors, artworks and niches, made the interior of St Basil's seem unworldly. The icono­st­asis was a wall of icons and religious paintings, separating the nave from the sanctuary.

There were nine tiny chapels clustered around a central nave, each topped with a brightly coloured, onion-shaped dome. The nine small, sep­ar­ate chapels  were aligned to points on the com­pass, four of which were  raised to designate their position between heaven and earth. The first 8 chapels were ded­ic­ated to important events eg the Protecting Veil of Mary; or the Entry into Jerusalem. The 9th chapel was added in honour of St Basil. The inside of the chapels, though quite small, were still richly de­c­orated.


Ivan saw the cathedral’s completion in 1561, yet his rage continued. Now he beat his pregnant daughter-in-law, causing a miscarriage, and killed his son in a fit of rage. And he intentionally blinded the cathedral’s It­alian architect, saying he wanted to ensure that its beautiful de­sign could nev­er be replic­at­ed el­sewhere.  I am not surprised that later, when he died, Ivan was interred elsewhere (at the nearby Archangel Cath­edral). His son became Tsar Feodor I in 1584. 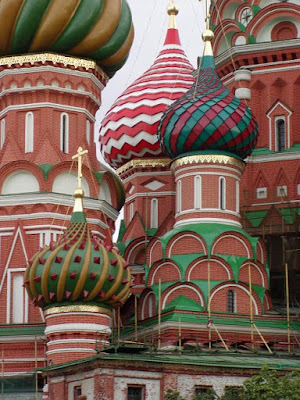 8 of the 9 onion domes featured on St. Basil's Cathedral
represented the 8 attacks on the Khanate of Kazan 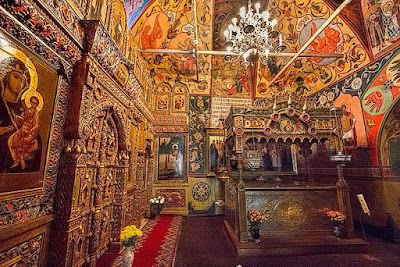 The interior walls are meticulously painted with intricate floral designs and Christian motifs. Explore the very narrow labyrinth of corridors and tiny oratories.


Survival was a fickle issue. The 1812 Fire of Moscow broke out when Rus­sian troops and residents abandoned the city, just as the Napol­eonic troops entered the city. The fire all but destroyed the city, yet St Basil Cathedral was spared! Even Napoleon’s specific order to his troops to blow up the cathedral failed; the fuses lit by the Frenchmen were snuffed by sudden rain. Perhaps Napoleon, real­ising he could not count St Basil's Cathedral among his war spoils, had a hissy fit and demanded it destroyed. Or perhaps the Moscow cathedral offended Napoleon’s architectural taste.

The cathedral’s exterior colour was originally white, to match the Kremlin’s white stone. St­arting in the C17th, the façade be­gan to be paint­ed in the bright colours that are still seen to­day. The colourful ext­erior of the cathedral is constantly maintained by fresh coats of paint.

Moscow’s large open Red Square market area had been the geog­raph­ic centre of Russian life since the C15th. Red Square cover­ed an area of 800,000 sq feet, housing the historic government Kremlin building at its western end. Some beautiful cathedrals were located in Cathedral Square, while other historic sites in Red Square included the State Historical Museum and Lenin’s Tomb.

After Lenin's death in Jan 1924, Stalin grabbed pow­er. St Basil’s became a secular tour­ist attraction, used as a mus­eum. But the church became an obstacle for Stalin’s plans to open up Red Square for political power displays. In 1933, the cathed­ral was deleted from the heritage reg­is­ter. Architect Pitor Baran­ovsky was summoned to do the last survey of the church sched­uled for dem­ol­it­ion, and was then gaoled for refusing to destroy the Cathedral as inst­ructed. By 1937 even brutal Stalin admitted that the church had to be saved. 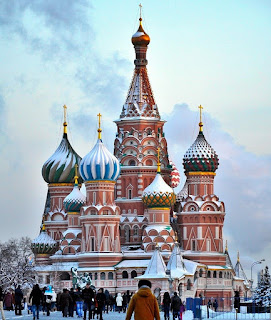 Red Square in the snow

Only since the Soviet Union ended in 1990 have occasional church ser­vices been held in this cathedral. The Kremlin, cathedral and Red Square were named a World Heritage Site by UNESCO in 1990. However St Basil’s Cathedral is neither the city’s main cathedral, nor the headquarters of the Orthodox Patriarch of Moscow.

I was fortunate enough to see this Cathedral earlier this year. Its colourful domes ensure it stands out like a beacon.

Good to see you Helen. St Basil is a colourful pleasure in summer, but even more important under the winter snow. All of Red Square defies the snow.

Hello Hels, I would kind of like to see what the cathedral looked like in its earlier incarnations when it was not quite so gaudy, but a quick search turned up nothing. I suppose the closest images are old black and white engravings.

By the way, Cleveland also has a domed Russian Orthodox church, much simpler with its 13 copper domes, but still quite a landmark since the overpass that takes you from the east side to the west side of the city has a close view of it:

Hi Hels - it's an amazing place ... I've never been to Russia - but I'd definitely have this on my schedule - it's incredible. Thanks for the write-up ... cheers Hilary

Agreed. Even in the early days, when Moscow was a much more sedate city, St Basil's structure, ex­terior decor­ations and domes must have been notable. But the cathedral was surrounded by rows of shops and commercial buildings, making Red Square into a closed yard.

It wasn't until the rubble in the Square between the church and Kremlin wall was cleared out, and the southern side of the terrace was completed in 1834, that the domes acquired their present-day colours and Red Square became a perfect location.

that is important to note, especially when some of the readers come from snow-free countries. I will find a photo of Red Square in the snow.

I can imagine when the Russian migrants began arriving in Cleveland in the late 19th century, families would have been desperate to have the familiarity of their beloved Russian orthodox church near their new home. The architect of St Theodosius clearly borrowed well from the Russian models, but which one in particular?

If you are planning to visit _just_ European Russia, I would still leave myself plenty of time. There are so many attractive cities and impressive natural history sites - St Petersburg and Moscow, of course, but also Kazan, Rostov, Irkutsk etc and my personal favourite, Odessa (which is now in Ukraine).

I can't help but think aspects of the cathedral inspired Gaudi. How fortunate we are that it has survived its various threats.

if a historical building is lucky enough to survive centuries of warfare, fire, bombing and de-consecrations, it has to be preserved at all costs. That doesn't mean that the building materials or the designs will not be modernised, as needed, but it does mean that the original architect's vision will be honoured.

I always believed that capital punishment was 100% immoral! But I would have taken Stalin apart, had it been possible.

St Basils says 'Moscow' as much as Sydney Harbour Bridge or the Tower of Big Ben stand for their respective cities. Your picture of the cathedral in snow is more appealing to me. Maybe I sub-consciously reject the added colourings!
CLICK HERE for Bazza’s officially overwrought Blog ‘To Discover Ice’

since the cathedral was not used for religious purposes just about since the Russian Revolution, we tend to think of the building in terms of secular tourism, as a museum of Byzantine-Asiatic-Muscovite architecture. But once the Mus­lim popul­at­ion was expelled and Russian colonists were moved into the territories Ivan defeated, passion for Christianity was a top priority. St Basil Cathedral oozes that passion. Especially in Noscow's winter.

Now I know why he was The terrible .My goodness what a nutter That was a very interesting post Hels. I will see it one day . Thank
you so much

Ivan the Terrible and Stalin the Brutal...
one was worse than the other :(