In the past Rouen was a city known for its medieval half-timbered houses. But things changed once the train arrived. The first railway station in Rouen was put into service in 1843 on the left bank of the Seine, connecting Rouen to Paris. In 1900, re-con­st­ruction of the station was declared of public imp­or­t­ance but bank­ruptcy of the Western Railway Co in 1909, and WW1 in 1914, delayed its progress. 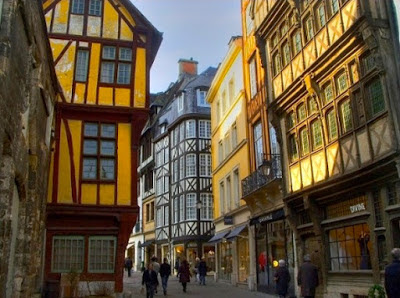 The Late Art Nouv­eau era lasted 12 years (1912-24) which explained Rouen Station’s fusion style archit­ecture, halfway between Art Nouveau and Art Deco. The concrete vaults of the ceiling of the room and in the rear part of the station were architectural el­em­ents that were meant to stand out. But the facade of the station was soberly decorated with an Art Nouveau decor. The new station was finally inaugur­ated in July 1928 by President of the Republic, Gaston Doumergue and was called Gare Rouen Rive-Droite.

Eventually the city commissioned many buildings and monuments with Art Deco architecture. Timing was everything. Art Deco was an art­istic movement that began just as WW1 was warming up and was more prominently launched with the Universal Exhibition of Decorative Arts in Paris in 1925. The movement was characterised by the right angles, modern materials, cut edges, ironwork, floral and geometric motifs and porthole windows: this return to geometric shapes insp­ired many interiors and exteriors. This return to geometric shapes under the influence of cubism may have further inspired many inter­iors and exteriors! 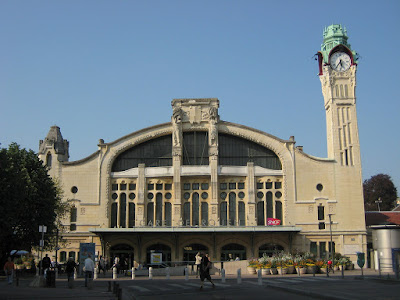 The Art Deco Metropole Building was built between 1929-31 as de­s­igned by Parisian architect Émile Bois and built by contractor Chouard de Bihorel. It was com­p­leted for the Reibel family who needed a build­ing with four businesses, perfectly located near the railway station on the right bank. This Metropole building played on the oppos­it­ion of straight vertical lines and a summit magnify­ing the curves. With a concrete frame and stone cladding, it was an excellent example of Art Deco architecture in Rouen. On the ground floor Café Le Métropole had a very appealing Art Deco presentation in the 1930s.

Jean-Paul Sartre (1905-80) and Simone de Beauvoir (1908-86) ob­tain­ed their philosophy degrees in 1929 at Par­is University. After his military service in March 1931, Jean-Paul Sartre was sent to teach at Le Havre in the current Lycée François. He proposed marr­iage to Simone de Beauvoir, so that she could leave her post in Marseille and join him in his school. She refus­ed but got her tran­s­fer soon after.. to Rouen. 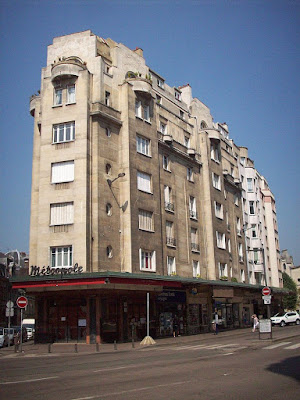 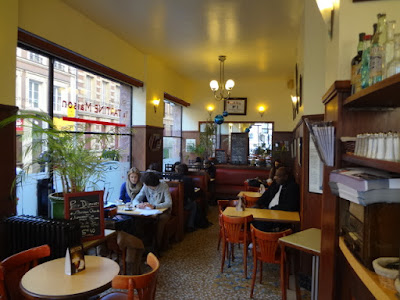 In Rouen Simone de Beauvoir first rented a room at Hotel La Rochefoucauld, facing the Church of Saint-Romain near the station Rue Verte. Then she lived at the Hotel du Petit Mouton. In her auto-biographical book La Force de l'Age, covering the years 1929-1944 she wrote: “during the four years that I taught in Rouen, for me the centre of the city always remained the station. The school was very close. I settled at the hotel La Roch­efoucauld, from where I heard the reassuring whistle of trains. I bought my newspapers in the lobby of the station; on the square, nearby, there was a red coffee shop. The Metropolis, where I had breakfast. I had the imp­ression that I lived in Paris, in a distant suburb. All the same, I was confined to Rouen for long days and often spent Thursdays with Sartre”.

Simone’s hotels were not far from Café Le Mét­ropole. So she popped in regularly to have breakfast and read news­pap­ers, before teaching philosophy at the Jeanne d'Arc High School. It was a satisfying café life, in the early-mid 1930s.

So the good citizens of Rouen knew about the two lovers together only when they came together to share their favour­ite wat­ering hole, with its beloved art deco interior. Le Métropole Café still shows the inter-war spirit with inter­ior dec­oration that was/is very sober. On the ceiling the chandel­iers are in the centre of cupolas; on the ground is a multicoloured mosaic.

Rouen was also the setting for de Beauvoir’s short story Chantal. Appropriately, it described the life of a teacher in a conservative provincial town. 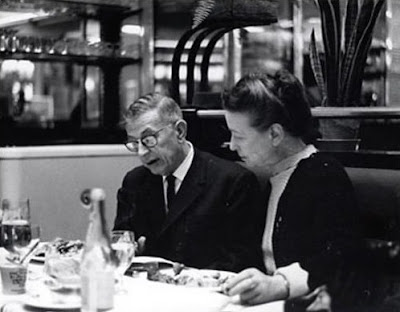 Sartre and de Beauvoir at breakfast

In 1933, when she was teaching in Rouen, de Beauvoir had a 17-year-old student named Olga Kosakiewicz, the daughter of Russian ém­ig­rés dispossessed by the Revolution. Olga was attract­ive and fresh; Beauvoir struck up a friendship, and in 1935, de Beauvoir proposed that Olga should put herself under the protection of her and Sart­re. They would be respon­sible for her education, and a few months later Olga moved into the Hôtel du Petit Mout­on with Beauvoir, and began an affair. Sartre also became in­fat­uated with Olga and spent two years attempting to seduce her. He failed.

Simone left Rouen and moved to Paris in 1938, now turning to lit­er­ature instead of teaching. [As a postscript, note that Simone died in 1986; in 1990, the executrix published Beauvoir’s unedited and shocking Letters to Sartre. The revelation was not the promiscuity! Beauvoir had always flatly denied having sexual relations with women; yet in her letters to Sartre, she regularly described her nights in bed with women].

In 1975 the Railway Station was declared a historical monument, largely with the Late Art Nouveau style building still intact. Its façade is still dominated by a tall clock tower and its many ornaments still characterise the era in which it was built. Note that in the Café Le Métropole, busts of Jean-Paul Sartre and Simone de Beauvoir still sit on the bench, in memory of the café’s most fam­ous cust­om­ers.

The Municipal Library of Rouen was opened in 2010 and is approp­riately named after Simone-de-Beauvoir. And there is a street in Rouen named in memory of Sartre and de Beauvoir, as there is in Paris i.e Place Jean Paul Sartre et Simone de Beauvoir in Saint-Germain-des-Prés.

It is certainly a very nice building and what an interesting history.

Your sister in law said...

The busts of Sartre and de Beauvoir are perfectly located above a seat in the cafe. Tourists drink their coffee and get photographed next to their literary heroes. Rouen is heavenly.

Beautiful, yes! The first time I visited Rouen, it was only to experience the important history and stunning architecture: cathedral, castle, Museum of Fine Arts etc etc. In 1972, I wouldn't have known Sartre and de Beauvoir if I ran smack into them. Now I need to go back again :)

Café Le Métropole is terrific. And Art Deco was the perfect style for the Bohemian-ish coffee society of the 1930s. I was born in the wrong decade :)

Hello Hels, Sometimes when I read about the milieu of these artists and writers, I am envious of their surroundings of unique architecture and brilliant conversation. However, the shenanigans that inevitably seem to accompany this type of rarefied atmosphere, I don't think I am cut out for.
--Jim

wow so I dont know much about these two but I couldn't help thinking that Simone groomed and abused a vulnerable young woman by our modern standards !

unless you are Jimi Hendrix Mark II back on earth, you are NOT cut out for it :)

Alcohol, drug or sexual abuse is frequent among artists in all media, to enhance their creativity and broaden their perceptions. That is not to say that non-artists do not suffer from traumatic events, depression, anxiety etc. But artists celebrate their abuses as publicly as possible. And artists usually have a supportive group around them, sharing and celebrating the abuses.

Sartre’s intellectual successes depended on his very promiscuous sex life, truckloads of alcohol and his constant abuse of hallucinogenic drugs.

until de Beauvoir’s “Letters to Sartre" were published, it seems that few knew about their relationships with each other and with other people - gay, straight, bi, exploitative, under age or celibate? Probably nobody would have cared one way or another, had they both been honest. But if de Beauvoir's greatest achievement in life was her relationship with Sartre, then she made some very strange decisions over the years.

Mind you, I would never forgive a teacher having a relationship with a student!

Hi Hels - I've never visited Rouen and really should. I've also not known any detail about Sartre or de Beauvoir ... so thanks for my brief take ... that you've introduced me to here ... cheers Hilary

I ran around Rouen like a headless chook, there was so much to see. Gros-Horloge, Joan of Arc's important locations, Palace of Justice, Normandy Parliament, Cathedral of Notre Dame, Impressionist Exhibition etc etc. Allow plenty of time!

France is just full of towns and cities with their own individual character and Rouen typifies that. The buildings that you show here seem to have a touch of Gaudi's influence. Satre & de Beauvoir have always struck me as a bit pretentious but many of the French 20th century philosophers do as well:Barthes, Camus etc
I will be in France the weekend after next for a few days, in Ambleteuse about a quarter of the way from Calais to Rouen. Hmmm...if I can persuade my companions to take a two hour drive.....
CLICK HERE for Bazza’s devotedly defamatory Blog ‘To Discover Ice’

every city is special city in its own way, true. I hope your group gets there.

Rouen is special, I think, because it did so well as a trading port, importing and exporting with Britain as fast as the ships could load up. Plus Rouen was hugely successfully creating and marketing textiles. Great trading = great architecture :)

But even great trading cities have bad times. Normandy was grabbed by an English king, Joan of Arc left her mark all over the city, and later a French king grabbed Rouen back for the French. Not to mention the terrible chaos during WW2.