Born Jeanne-Louise Beaudon (1868-1943) in Belleville, the dancer was the daughter of a courtesan. She was abused at home, ran away at 16 and lived in the streets. She entered the Salpêtrière hospital in Paris with “female hyster­ical convulsions”, and at one of their fancy dress balls for patients, she found her cure AND her vocation. 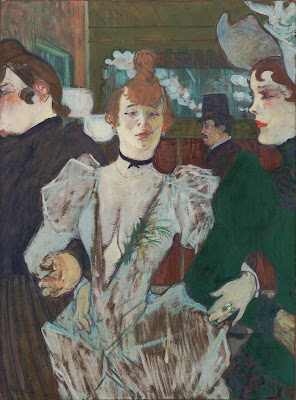 Moulin Rouge Cabaret opened in 1889, offering customers nightly perform­ances by its stars. At 20 the young dancer was taken on, adopting the stage name Jane Avril as suggested by an Englishman. Known for her exotic persona and breath-taking gymnast­ics, she became a profes­s­ional dancing stars in the 1890s, and loved devising her own choreographic routines and dress. See the bold portrait called La Goulue/greedy (1891 Museum of Modern Art NY).

Fame arrived with striking portraits and posters in both art and advert­is­ing. They were designed by artist Henri de Toulouse-Lautrec (1864-1901), a member of one of France’s oldest noble famil­ies. Jane was det­ermined to make her mark on Montmart­re’s flourishing dance-halls and cabarets, starring in Lautrec’s world of dancers, cabaret singers, musicians and prost­itutes. 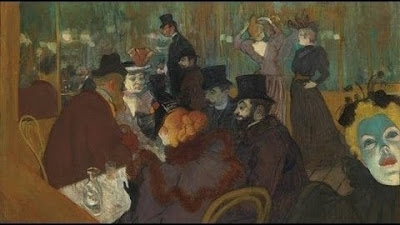 At the Moulin Rouge, c1893
They showed Jane Avril au Jardin de Paris (1893), where transport ran after the Moulin Rouge closed at 11 PM. This dramatic Japanese-style poster, which she credited with launching her career, showed Jane doing the cancan and a musician grasping a double-bass. Also striking was Jane Avril in profile at the venue called Divan Japonais 1893.

Toulouse-Lautrec’s relationship with Jane Avril was closer than his other Montmartre subjects and she remained his friend till death. Their friendship was reflected in portraits in which the star was shown as a private individual, in contrast with her exotic poster image and her Moulin Rouge performances. A striking bust-length Portrait of Avril 1892 focused on her startlingly angular face.

Lautrec was famed for his familiar portraits of 1890s Parisian nightlife, other than Jane Avril. A high-class prostitute, Lucy Jourdain?, was shown elaborately dressed at a café-restaurant: In a Private Dining Room At the Rat Mort (1899). The left lamp cast a green glow and the blurriness suggested seedy night-time entertainment.

Lau­t­rec’s tragically early death in 1901 marked the beginning of the end of Montmartre’s Golden Age. Jane Avril went on to perform briefly as a stage actress. Realising that she couldn’t dance forever, Jane Avril needed marital security, as well as a home for her son Jean-Pierre. She married the talented printmaker Maurice Biais (1875–1926) in 1911 and settled into bourgeois obscur­ity. While in New York, Biais showed his work at the Max Williams Gallery.

But Biais suffered from a lung disease, and couldn’t maintain a stable home for his wife and step-son; by the 1920s, he moved alone to the south of France, dying in 1926. When Jane Avril died in 1943, in Nazi Paris, she was interred in the Biais family vault at Père Lachaise cemetery. 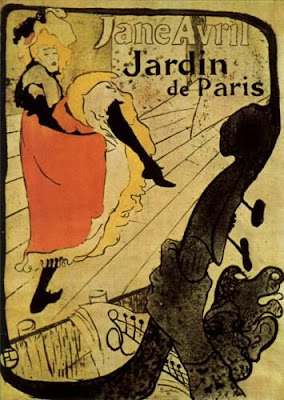 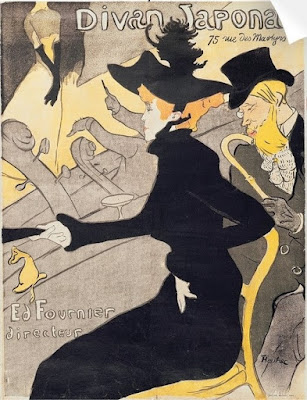 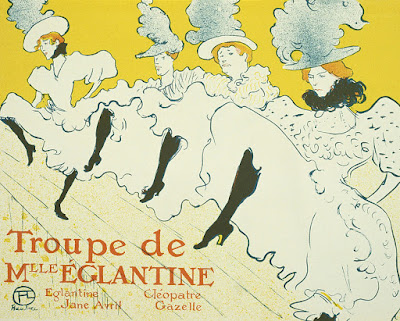 The Courtauld Gallery held a 2011 exhibition: Toulouse-Lautrec and Jane Avril: Beyond the Moulin Rouge. In placing the artist and performer within a larger historical context, the exhibition was successful in demonstrating how significant a celebrity icon she was during the 1890s.

In Room 1, there were contemporary photos, primary documents and other works by friends and lovers that showed how compelling a subject Jane Avril was to Lautrec. In Room 2 there was valuable historical inform­at­ion about her early life, specifically regarding her hospitalised era.

The exhibition raised significant questions regarding Montmartre’s late C19th culture. And it made it poignantly clear why Lautrec was attracted to Jane’s personality, creat­ivity and unusual beauty. For example in the painting Jane Avril in the Entrance to the Moulin Rouge (1892), the hat and coat on the wall alluded to her male admirers. However she seemed far older than her 22 years.

Avril asserted her personality through Lautrec’s works, becoming a celebrity figure. While she was often not the main Moulin Rouge dancer, remaining in the back­ground in many performances, she was foregrounded by Lautrec in his studies. In Jane Avril Leaving the Moulin Rouge (1892), the artist created a psychological portrait that showed the model lost in her own thoughts and unaware of the other pedestrians. The exhibition also explored the intersection of Avril’s medical history and her public persona.

The artist’s focus to her intelligent, sensitive face revealed Toulouse-Lautrec’s keen understanding of her personality. Since Lautrec portrayed Jane Avril outside the focus of her Moulin Rouge performances, we may wonder if there more to their relationship than thought. Had Lautrec found a kindred artistic soul? Did he fall under her siren’s spell? Questions such as this were hinted at the Courtauld exhibition and in the catalogue.

With the Portrait of Jane Avril (c1892 Clark Art Institute, Massachusetts), the question of artistic ties between Lautrec and Avril was raised once again. The catalogue note on the painting suggested that Jane Avril loved artists, but why? Who were some of the other artists she admired? And another thing. What were Maurice Biais’ ties with the Parisian art scene and his long-standing association with Avril, at a time when Lautrec was busy immortalising her?

At the Moulin Rouge (c1893 Art Institute of Chicago) served as a homage to the venue and his circle. From the rear Jane Avril was instantly recognisable by her red hair. The ghostly face of the English performer May Milton appeared, as did Lautrec’s diminutive figure. 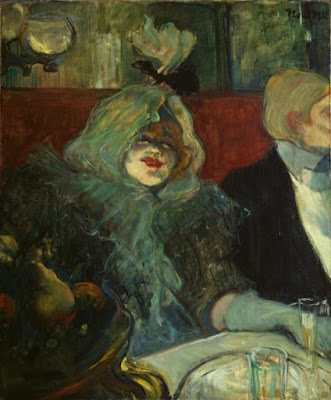 In a Private Dining Room At the Rat Mort,1899

In 1896 Jane travelled to London to perform at Palace Theatre with Madem­ois­elle Eglantine 1895. So Lautrec designed a poster for the per­formance which showed four cancan dancers surrounded by petticoat froth and black stockings. The exhibition included Palace Theatre drawings, Avril and Lautrec letters and Palace Theatre programmes.

Toulouse-Lautrec and Jane Avril were made for each other. A perfect blending of style, form and content! Two rebels who both excelled at their chosen art and both with less happy endings than they deserved.
CLICK HERE for Bazza’s seemingly shining Blog ‘To Discover Ice’

Hel I always believed that the police were there to prevent ladies doing the cancan without wearing undies. Or to stop prostitutes from doing business inside the cabaret. Apparently not.

Hello Hels, I can understand why dancers would be attracted to and fascinated by fin de siècle Paris artists like Toulouse-Lautrec. They were the ones who created the look and feel of the era, that over the top, greater than real life effect that attracted the public to the various dance halls and bars. Other groups of celebrities and their leaders would typify the glamour of other eras--Dr. Johnson's London, Gertrude Stein's expatriate group in the Paris of the 1920's and later, and even the late 20th century disco era.
--Jim

Hi Hels - I hadn't realised this connection ... but I do recognise Lautrec's posters ... love the froth of petticoats - interesting to read up - cheers Hilary

For full coverage of this period, I recommend "Moulin Rouge" by Pierre La Murre. It is a good many years since I read the book, but I enjoyed it thoroughly. I intend to reread it now. I am not sure whether it was translated into English, but the Hollywood film, Moulin Rouge, was based on this book. A couple of excerpts from the blurb on the back cover...."Vie brève que celle de Toulouse-Lautrec, mais si bouleversante, si agitée, qu'elle fut en réalité plus pleine et plus riche que bien des existences plus longues." And, "Biographie certes, mais plus passionnante qu'un roman."

I had forgotten about the sad bits, amongst all the exuberance. eg Toulouse-Lautrec's terrible childhood when his parents left him with a stranger, his crippling genetic disorder possibly osteoporosis and his rampant alcoholism. And Jane Avril's poverty and abuse as a child, her long hospitalisation (for what?) and tragic loss of her husband.

I too am glad they had each other.

I have no idea why police officers bothered making regular inspections to ensure that the women dancers were all wearing underwear. It was a waste of time morally and it irritated the paying customers. In fact every time the police hauled off women, they cabaret owner or male customers would simply go to the local gaol and bail the artists out.

there were beautiful clothes, music, dancing, art, alcohol and night life in other cities back then, but no city was as gloriously alive as Paris. When Moulin Rouge (and then other places) opened in 1889, artists and musicians flocked to France to live.. and male cabaret customers in the UK and Germany travelled to Paris for their bucks nights and birthday parties.

Other cities later had their own cultural peaks, but probably quieter and less fun than fin de siècle Paris.

we were born at the wrong time. We would have known all about the cancan, frothy petticoats, absinthe and great artists, had we been born in the late Victorian era.

A short life, mega talented and tragically agitated - yes indeed. Toulouse-Lautrec's life might have been very rich, but it was oh so short (c37).

I will get the book, many thanks.

I really appreciate on your post.... and I got an use full information about the matter... I just tried to write the same post..
Architectural designer in Clapham

sometimes a particular post takes forever to write, or stubbornly refuses to get the facts in the right chronological order. Believe me, I know! What problems did you face with Toulouse Lautrec and Jane Avril?