The album celebrated the Coronation of King George VI and Queen Elizabeth with their childhoods, their wedding, an explan­at­ion of coronations over the centuries and great full-page photos. The beautiful red hardback was blind-stamped with regal décor­ation and gilt title.

I only wish the album had chapter headings in the front, an index in the back and individually dated photos, to use as an-easy-to-analyse historical document.

In Jan 1936 King George V died.. so his eldest son, Ed­ward VIII, succeeded him as king. Edward was still single, but the American soc­ialite, Wallis Simpson, had been close to him in the years lead­ing up to 1936. She was divorced from her first husband and still married to her second husband, shipping executive Ern­est Simpson. Edward and Wallis’ relat­ion­ship had not been reported in the Brit­ish press [because of the King's position in the Church of England].

King Edward's cor­on­­ation ceremony was planned for 12th May 1937, and while he was away with Wallis Simpson, Albert Duke of York sat in his place on the committees. King Edward had initially been reluct­ant to have a coronation at all, but he allowed a shorter, simpler serv­ice.

In 1936 the King told the Prime Minister Stanley Baldwin that he intended to marry Wallis. Baldwin and the Empire leaders ad­vis­ed the King that popular opinion in the dominions was hostile to the marriage; and at home he fac­ed opposition from the Church and from Parliament. The wide spread reluctance to accept Simpson as the King's consort and Edward's refusal to give her up, led to his ab­dication in Dec 1936. Wallis’ second divorce was finalised in May 1937. 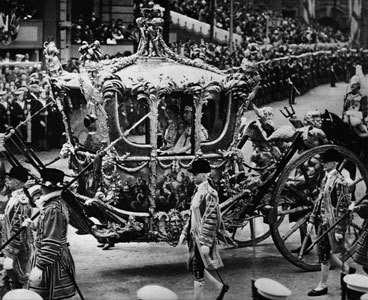 With the abdication, King Edward was succeeded by his next brother, Prince Albert Duke of York and his wife Lady Eliz­ab­eth Bowes-Lyon, daught­er of the Earl of Strathmore. It was decided to con­t­in­ue with King George VI and Elizabeth's coronation on the same date that had already been organised for brother Edward.


Archbishop of Canterbury, Cosmo Lang, spoke to the nation through the BBC serv­ic­es leading to Coronation Day; he saw the Coron­ation as an opportunity for the spiritual re­newal of the nation, and organ­ised a campaign of evangelism called Recall to Re­lig­ion.

The Archbishop was somewhat concerned about King George's stutter even though Lionel Logue was still the King's speech therapist. Logue remained his therapist and the King did deliver his speech without stuttering! 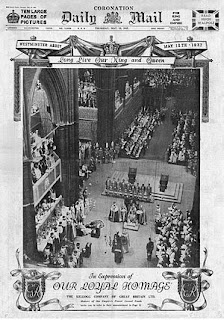 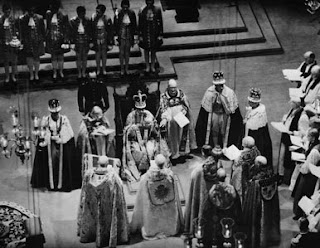 King George VI on his throne,
receiving blessing during the coronation, 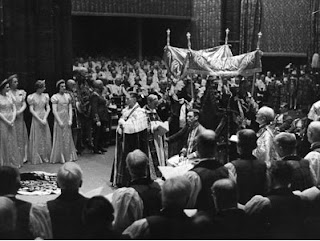 The ceremony was attended by the royals’ daughters, King's mother Dowager Queen Mary, royal cousins, peers, members of parliament, colonial administ­rators, ambassadors, foreign royals and heads of state, trade union repres­entatives and members of the armed forces. Once the lengthy proces­s­ion had made its way to the abbey, the royals travelled in their gold State Coach to the Abbey.

The Imperial crown had been remade for the occasion by the Crown Jewellers. Queen Elizabeth's crown was new and featured the Koh-i-Noor diamond from the crown of Queen Mary. Queen Elizabeth wore a gown made of silk satin, with pure gold thread embroidery and British Empire icons.

The first part of the coronation service was the Recognition, where the Archbishop of Canterbury asked those present to proclaim the sovereign as their rightful king. The King knelt before the al­tar and swore on the Bible his coronation oath. The three archbish­ops then began the Communion Service and afterwards, the King and Queen knelt while the choir sang. Then the Arch­bishop of Canterbury anointed the monar­ch's head with oil and the choir sang Handel's Zadok the Priest. Adorned in his regalia, George was crowned by the Archbishop of Canterbury and the people proclaimed God save the King. The Ar­ch­bis­hop presented the Bible to the King and the Benediction foll­ow­ed.

Each Archbishop knelt and paid homage to the King, fol­lowed by each of the Bishops and Dukes. The Queen was crowned and anointed in a much small­er and simpler ceremony. She was handed her Sceptre with the Cross and the Ivory Rod with the Dove.

Finally there was a pro­cession through London's streets from West­minster Abbey, allowing the public to view the royals. They went via Par­liament Square, up Victoria Embankment and all the way to Buckingham Palace. The progression included a huge number of milit­ary personnel from Britain and across the Empire.

This Coronation ceremony was the first one to be broadcast on radio. Microphones around the Abbey captured the music and speech such that the BBC's Empire Service broadcast the whole 2.5 hours. And talks by Min­is­ters were broadcast under the name Responsibilities of Empire, presumably to further Britain's imperial ambitions. The coronation services were filmed and then shown as a news­reel in cinemas across the British Empire. 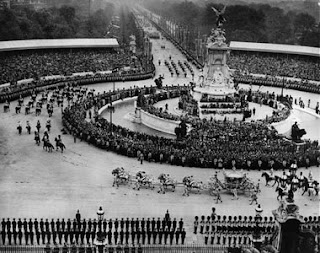 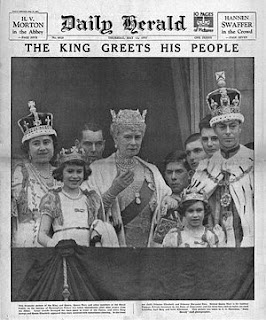 The royal family on the balcony of Buckingham Palace

After the ceremony itself, a 23-day-long programme of official events spanned May 1937 in a very public spectacle, to recapture the con­fid­ence of the nation after the abdication crisis. The public spectacles included a royal drive through north London, a luncheon at Guildhall with London dignitaries and the Empire Ser­vice of Youth in West­minster. The King and Queen inspected fleets, visited flagships and saw street parties decorated with flags.

The final coronation event was the Review of the Fleet, held at Ports­mouth. The Empire was repres­ent­ed by warships.

The King marked his day by giving hon­ours to his subjects, while appointments were made to the Orders of the Garter, Thistle etc. An official medal was also struck to mark the occasion, issued to 90,000 people from across the Empire.

Clearly the media played an important part in broadcasting this show of pageantry and imperialism to the Empire. But the National Archives also had many photographs of celebrations from across the Brit­ish Empire: military parades, athletics events and religious services. The coronation was designed to be a public display of the glory of the British Empire. 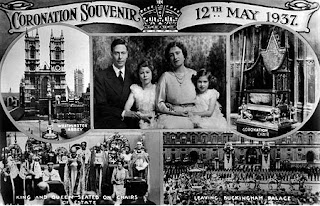 Two years later WW2 began and the joy was over. Three years after the coronation, British cities suffered terrible bombardment from the Nazis.

I wonder how different history would be if Edward was allowed to marry Wallis. I believe in the separation of church and state and I find it troubling that there is still a strong connection. Nevertheless, the younger royals don't seem too interested in religion, unlike Her Maj who does mention church and god often enough.

Was it just the Nazis or the country Germany itself that bombarded England? Just saying.

Lionel Logue made a major contribution to George's peace and Britain's pride.

Edward was definitely allowed to marry Wallis, OR he could be crowned king. What he could not do was both. He ruled as king for less than a year, then gave up the throne (voluntarily) to marry the woman he loved.

The separation of church and state is interesting because every British king or queen is the symbolic head of the Church of England. So while all secular positions of authority must maintain the separation, Edward’s own church could hardly be dismissed by the head of that very church!

My sole source of information was the film "The King's Speech". The film analysed the relationship between King George VI and Lionel Logue, the Australian speech therapist who cured the king of his stammer in time for his coronation. Logue must have been a genius; when Brits heard the live radio broadcast after the coronation, everyone thought the speech was perfectly normal.

Hi Hels - it certainly wa/is an interesting period in our history ... I hadn't realised (nor thought to check) about the 1936 Coronation Service being broadcast by the BBC ... thanks for this post on the 1936 Coronation. Cheers Hilary

Hello Hels, Although I dislike Wallace Simpson, I often say that the only good thing she ever did was to keep Edward from staying king of England.

George's coronation looked like a spectacular event, and was probably good for British morale as things were heating up in Europe.
--Jim

the first section of the album goes back into the late 19th century, through the Edwardian era and WW1, then into the young years of Princesses Elizabeth and Margaret. There are even photos of citizens reading about the constitution crisis of King Edward VIII. But I cannot find a single photo of when Edward's father died in Jan 1936 nor of Edward's abdication in Dec 1936. Nor of Mrs Simpson. Only the words from Edward's abdication speech from Dec 1936 are included.

I too disliked both Edward and Wallis, but not because each of them slept with every adult who breathed. But because Joachim von Ribbentrop, ambassador to Britain in 1936 and then Nazis' foreign minister, had been the duchess's lover. He wanted Edward to take the throne, keep it, marry Wallis and prepare for a friendly German takeover of Britain.

Perhaps that is what the Duke and Duchess were arranging, when they visited Germany in 1937 and were warmly welcomed by Hitler and other senior Nazis.

Disdain for Edward and Wallis Simpson is still strong in the UK. His Nazi sympathies are well-known and we are lucky not to have suffered them.
One of my earliest memories is of the 1953 Coronation and that gold coach and the street parties.
CLICK HERE for Bazza’s devotedly defamatory Blog ‘To Discover Ice’

Oh bazza.. I am in love. Not being a royalist, I am still delighted you saw the 1953 coronation and remember the street parties. My earliest memory was in 1954 when Queen Elizabeth toured Australia on a slow moving, open ended train. At my primary school, all the children were taken to a railway station where she waved to each of us :)

Dercy
Do you have a view on how the coronation was presented?