I have spent many of our winter holidays (July) around the Medit­er­ranean. This included Spain, France, Italy, Malta, Yugoslavia, Greece, Tur­key, Cyprus, Israel and Egypt, but never further west along the Medit­er­ranean coast of North Africa. Thus the plan was to travel to Tunisia, North Algeria and Morocco, but life intervened, alas ☹. Now: Djerba. 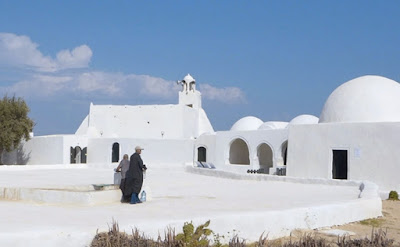 Most Djerbans are Muslims. So there are many small mosques scattered around the countryside, between the olive and palm trees, often with modest Tunisian architecture. See Fadhloun Mosque which was originally built in the C14th, belonging to a set of mosques that protected local citizens in case of an enemy attack. In fact the original min­aret was not used by the muezzin, but as a watchtower. Fadh­loun Mosque is surrounded by a courtyard and for praying dur­ing the Tunisian heat, there are two areas with an outside mihrab. Plus the mosque acted as a bakery for the local community.

The presence of many Italian and Maltese fishermen on Djerba required building the first Catholic place of wor­ship in Houmt Souk, St Joseph Cathedral in 1848. The small square church had an altar dedicated to Our Lady of Mount Carmel and a presbyt­ery. The building was enlarged to install a choir and to increase the nave. To emb­ell­ish it, prelates brought from Malta a crucifix of natural size and relics from Saint Lucia. More recently the interior of the church was renewed, including six large windows and twelve pillars ornamented with cornices and capitals. 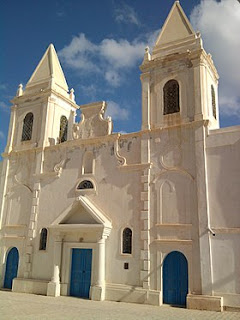 The Jews of Tunisia claimed they arrived in ancient times, and after the Reconquista, more Span­ish Moors and Jews arrived, spreading across Tunisia. But when the French capitulated to Nazi Germany 1940, Tunisia came under control of Marshal Philippe Pétain’s Vichy regime. As in France, anti-Jewish legislation was passed in Tunisia, which forced all Jews to wear Star of David badges, confiscated their property, and sent thousands to forced labour camps. In 1942, Tunisia became the only Arab country to come under direct German occupation.

In 1943 the main body of the British army, advancing from their victory in Battle of el-Alamein under the command of British Field Marshal Mont­gomery, pushed into Tunisia from the south. Before the Battle for el-Alamein, the allied forces had been forced to retreat toward Egypt. The Geman-Italian Army in Tunisia surrendered and Tunisia was returned to the control of France.

There were 110,000 Jews in Tunisia in 1948, although many fled to the new state of Israel. At its maximum, Djerba Island itself was home to c5,000 Jews. Now the community is c1,100, with the remainder living in the capital, Tunis. But unlike the few remaining Jewish communities in the Arab world, Djerba’s Jewish population is young and growing.

Now see a great report by Noam Ivri of a part of Tunisia I am interested in. The trip from the airport shows flat, semi-arid topography, and in the distance, palm and fig trees fills vast agricultural fields. Stone houses dot the road, often painted blue and white a la the Greek Isles. But do the locals have an unsettling sense of the country’s econ­omic difficulties, 8 years after the Arab Spring revol­ut­ion? Revolution deposed the authoritarian government of Zine al-Abidine Ben Ali (President 1987-2011)! 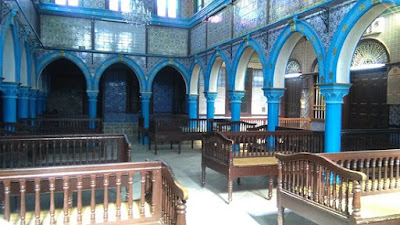 Ironically Ben Ali was remembered as a defender of the country’s secul­arist character, who ruthlessly suppressed Islamic advocates of violence and terrorism. There was initial fear of instability that followed the victory of the Islamist Ennahda party in the 2011 elections, but their worst fears of a Muslim Brotherhood-style theocracy did not mater­ialise. In any case, many minorities felt a profound sense of relief when the secul­ar­ist Nidaa Tounes party won the 2014 parliamentary elect­ions, and Ennahda peacefully ceded power to the new secular-dominated coalition government.

Hara Kebira/Big Town is Djerba's Jewish village. At the village entrance, concrete barriers block the road, plus a policeman stand on guard. 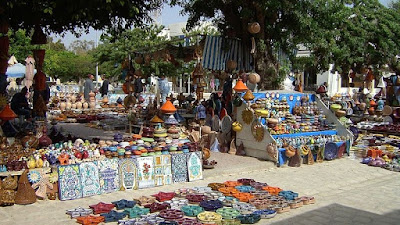 Early in the day, Noam Ivri’s hosts suggested some sight­seeing. The cobble­stone streets are lined with white-washed buildings with bright blue shutters, and the walls display bougainvillea. Djerba’s Jews maintained a relatively protective life, resp­ect­fully engaging with the island’s 175,000 Muslims during the day, but confining their family life within the Jewish encl­ave. Though most of the merchants in the market are Muslim, there is a section of that is dominated by Jewish jewellers and silversmiths in Houmt Souk’s marketplace. 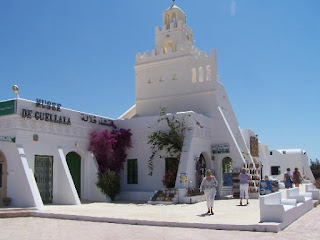 The Guellela Museum disp­lays Djerban cul­ture through ethnographic exhibits. The Museum shows how the island’s industries and crafts are created, and how marriages are celebrated in Djerba. Note the exhibits on religious customs, mus­ic­ians and artists, showing Muslims, Christians and Jews as an integral part of Djerba’s ethno-cultural mosaic.

El Ghriba Synagogue, the oldest synagogue in Africa and one of the only two surviving synagogues on the island, was built in Hara S’ghira /Little Town neighbourhood and rebuilt in C19th. Israeli tour groups going to Djerba for the annual Lag Ba’Omer pilgrimage love this beautiful synagogue. Since 2011, the Lag Ba ’Omer holiday was the only time of year when Israeli citizens were permitted to enter the country, according to Tunisia’s post-revolution visa policy.

Rosh Hashanah in Djerba was a time for ceremonial meat feasts. The main street was soon bustling as store owners rolled portable grills outside, for a festive block party. And the music of legendary Arab singers such as Umm Kulthum and Fairuz blared out of radios set up outside.

Following the ways of their ancestors, the Jewish community of Djerba continued to maintain the traditions that sustained 2,500 uninterrupted years of life on the island, through great times and bad. Now Tunisia is seeking UNESCO World Heritage status for Djerba.

Helen I loved holidaying in Tunisia, a country that has many sites with World Heritage status already. Djerba Island thoroughly deserves to be the next site that UNESCO preserves.

I looked at other UNESCO sites in Tunisia and found some wonderful places eg Medina of Sousse a town from the early Islamic Period; Medina of Tunis' mosques, mausoleums, madrasah and fountains from the C12th-16th. But I think an entire island would be even more appealing, and more diverse.

Hello Hels, Considering its complicated and contentious history, it is surprising how many well-maintained or restored monuments survive in Tunisia (as well as in other places), and that people found the time and peace to refine and ornament these buildings in the first place.
--Jim

Interesting history, that I expect may not be picked up many visitors. I suppose it is unusual for Jewish people to be allowed into a Muslim country at all.

Australians are so ahistorical, we tend to ignore important buildings, monuments and land that saw significant events. Thank goodness for countries like Tunisia that has done its best to protect its own historical sites.

If the history of a nation is complicated and contentious, as you say, or has been re-written over the centuries, it still needs to be preserved. But the contested aspect of the history needs to be acknowledged.

Almost every nation on the planet has as its top priority to warmly encourage tourists, wherever they come from. Three of the countries that gave us a great time were Turkey, Jordan and Egypt.

The three lots of tourists warmly welcomed in almost every country of the world are Swedish, Canadian and Australian :)