Bashar al-Assad was born in Damascus in 1965, the second oldest son of Hafez al-Assad. Father Hafez was born to a poor rural family of Shiite Alawite back­ground who rose through the Ba'ath Party ranks to take control of the Syrian branch of the Party in the 1970 Corr­ective Revolution. This culminated in his rise to the Syrian presid­ency! In Sunni-dominated Syria (74% of the nat­ion), Shiite (12% of the nation) Hafez promoted his supporters with­in the Shiite Ba'ath Party, many of whom were also of Alawite back­ground.

Bashar a-Assad had 5 siblings, 3 of whom died early. He received his primary and secondary education in the Arab-French al-Hurriya School in Damascus. In 1982, he graduated from high school and then studied medicine at Damascus University. In 1988, Assad began working as an army doctor at the Tishrin Military Hospital in outer Damascus. 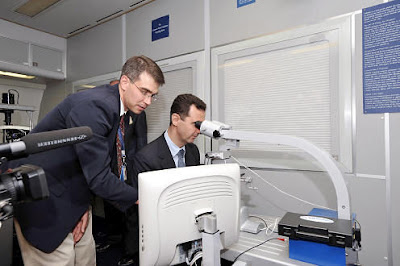 Four years later, he moved to the UK to begin post graduate train­ing in ophthalmology at the Western Eye Hospital in Marylebone Rd, London. While living alone in his London flat for two years, Bashar had few political aspirations, planning only to practise medicine and involve himself in technology. His eventual London practice, his fellow students believed, would offer dependable, everyday medicine that relieved the suffering of sick Britons.

Dr al-Assad and I didn’t meet each other. I did my medical years in the UK in a different decade, a different hospital and a different medical specialty. But we may well have known the same consultants, att­ended the same medical conferences and read the same medical jour­nals. And undoubtedly Bashar and I both worked overly-long hours and earned miserable wages.

However his older brother Bassel al-Assad died in a car accident in 1994 and Bashar was re­called to the Syrian Army at Homs very quickly. Over the next 6.5 years, until his death in 2000, father Hafez prepared Bashar for taking over power; support was built up for the young doctor in the military and security sectors. Bashar rocketed up the ranks to become a colonel of the elite Alawite Syrian Repub­lican Guard.

Parallel to his military career, Bashar was granted wide political powers - many of Bashar's potential rivals for president were put on trial for corruption. But Syria was already facing rebellion - Sunni fighting Shiite against a backdrop of agitations across the Middle East.

After the death of Hafez al-Assad in June 2000, the Constitution of Syria was amended so that Bashar Assad could stand for President. In the first contested presidential election in Ba'athist Syria's history, Bashar al-Assad was then confirmed President in July 2000, with 99.7% support for his leadership. And as President of Syria, he was also appointed commander-in-chief of the Syrian Armed Forces and Regional Secret­ary of the Ba'ath Party.

Three progressive events occurred. Firstly Bashar became the President of the Syrian Computer Society and helped to introduce technological modernity in Syria. Secondly a reform movement made cautious advances during the Damascus Spring of 2000. Amnes­ties released hundreds of Muslim Brotherhood affiliated political pris­oners and the most brutal prisons were closed. Finally Assad briefly allied his country with the West.

But despite hopes for democratic change, the Damascus Spring didn’t last. Within months, Assad’s regime used arrests to stamp out pro-reform activism; economic changes had to precede political reforms. Assad streng­th­ened Syria's link with Hez­bol­lah, its patrons in Iran and later Russia. Meantime the USA, the European Union and most of the Arab League called for Assad's resignation, particularly after he ordered military sieges on Damascus Spring protest­ers.

In the long run this led to the Syrian Civil War which started in 2011. Since then, Assad The Loved Doctor morphed into Assad The Mass Murderer. This blog has carefully noted degenerate killer-doctors before eg Dr William Palmer, Dr HH Holmes and Dr Harold Shipman etc. But these men killed dozens or perhaps hundreds of civilians.

Assad’s killing sprees emerged on an industrial scale! More than 400,000 Syrians dead, six million citizens internally displaced and five million refugees fled abroad. And to add to the unspeak­able tragedy, it was at the hands of a president who used to be a proper doctor. 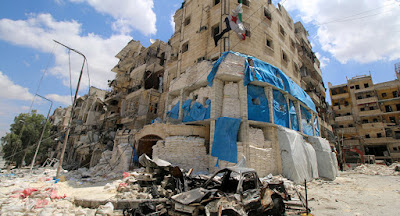 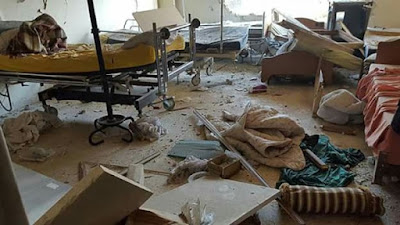 Destruction of a MSF ward in Aleppo Syria, 2016

As well as bombing civilian populations, Assad also targeted hospitals, the exact atrocity that started the Geneva Conventions 150+ years ago and led to the creation of the Red Cross. It was the original war crime! c800 medical pers­onnel have been killed and many others detained and tortured. Since 2011, there have been 450 attacks on Syrian hospitals which now lie in ruins. What a nightmare!

The United Nations said that no previous war has witnessed such deliberate, systematic targeting of medical facil­ities and health professionals, all ordered by a doctor president!! Bombing anonymous civilians may not have upset Assad, but I assume that system­atically killing his medical colleagues and their patients would have distressed even the hardest of medical hearts. In any case, why would a doctor president specifically target hospitals, of all facilities, for his kills?


Unsurprisingly an inquiry by the United Nations reported the evidence which implicated Assad in war crimes. In June 2014, Assad was finally included in a list of war crimes indict­ments of government officials and rebels handed to the Inter­nat­ional Criminal Court. One month later, in July 2014, Assad was sworn in for another 7-year term!

Doctors Without Borders/MSF is supporting ten hospitals and thirteen other medical facilities in Aleppo now. These facilities were required so they could cope with the extra number of wounded, given that a] the original MSF hospital was destroyed and b] because there were MANY wounded people being bombed in other states. The doctors working in Aleppo were the real heroes because they risked their lives at every moment. 95% of the doctors who were living in eastern Aleppo before the war either fled or were killed, so there are few medicos still working in the city.

Some residents in British hospitals were clever and some less so, but what they all had in common - hard work, studying and very long hours. Regardless of his important father, Dr al-Assad must have worked as hard as the others.

Hi Hels and Dr Joe - thank you for the background ... I knew he was a doctor (an ophthalmologist) - but I still can't imagine how he and his friends instigated and supported the systematic killing of so many ... or how they can live with themselves. Thank you both for the post ... I will re-read so I can learn some more of the organisations and horrors. Dreadful that man can do this to other human beings ... Hilary

people suggest Bashar only got into Medicine in Syria through his important family connections. But evidence from Western Eye Hospital showed that the young doctor was as good as the other young doctors doing their hospital training in Britain. He was both talented and keen to get ahead in medicine.

“First do no harm” remains an important injunction against medical over-treatment, under-treatment, neglect and fads. In my experience, British, Australian and other doctors take this injunction very seriously, checking with senior staff if there is any doubt at all about how to look after a patient. If a mistake is nonetheless made, the doctor concerned feels appalling.

Compare this to systematic killing on a grand scale !!

a really important topic. Hopefully the Inter­nat­ional Criminal Court will pursue the intentional bombing of hospitals and the killing of c800 medical pers­onnel in Syria. And then broaden to the other war crimes.

A very interesting post.
My daughter is a doctor . Sometimes we forget what they give to us ...

your daughter did well. Medicine is not easy to get into and the training is very long. But it is the best profession in the world. Except for people like Dr al-Assad and Dr Shipman.

Do no harm. But he did. A lot. I am left wondering how people who are well educated, well brought up, who lived, trained and doctored in a very civilised place, can go so terribly wrong. Self preservation is a strong human instinct, but I don't believe an inhuman act of mass killing can be directly associated with that.

I may be naive Joe but it's difficult for me to understand how a man, who lived in the West and saw what a tolerant multicultural society can achieve, could become the monster and disgrace to humanity that he has become!
CLICK HERE for Bazza’s laughingly loquacious Blog ‘To Discover Ice’

Andrew How do we explain the change from caring, educated and hard working medical professional to a war criminal? Undetected brain damage. Being surrounded by killers who made him rethink his priorities. Desperation to become Syria's greatest tough man. Fear of disappointing his father.

bazza He was certainly exposed to a tolerant multicultural society in Britain and according to all reports, loved his years away from home. I do believe that had his older brother not died, Bashar would have loved working as a specialist in London. He could have also taken on a diplomatic role for Syria in London, had he been asked to.

First, I agree with Andrew and Bazza's replies. When you have a good example, that leads to the best condition for many people, it is hard to realize why anyone would defy this principle. It seems to be true that "absolute power corrupts absolutely" and that many dictators and war criminals started out as different types of people who changed psychologically when put in a position of power--how can you stop caring about others, especially when that was the original dedication of your life?

I think that Assad's story is different from those of the other doctor-murderers we read about, who simply had a degree of insanity or criminality that led them to take advantage of their profession to kill the relatively few people who got in their way, or possibly whose sufferings the doctor independently decided to end.
--Jim

the shift from half-way decent leadership to brutal dictatorship is one we have heard of before. Even though there were differences, I agree.

Idi Amin was pro-Western and pro-Uganda at the beginning of his reign, until tertiary syphilis made his mind mush. He became a brutal mass murderer. Pol Pot began a radical experiment to create an agrarian utopia in Cambodia, until he had 25% of his nation's population enslaved and then executed. Fidel Castro was a hero to millions, introducing central economic planning, quality healthcare and education, and environmental protection. Later he suppressed political dissent via long-term imprisonment and exile.

It seems to me that this man is a classic Psychopath who was "switched on " to do unspeakable crimes by feeling besieged and threatened by a majority who were beginning to flex their numbers . He is probably totally convinced that his own survival and that of his religious grouping is dependent on the suppression of the Sunni Majority and maybe he is right about that especially after the cruelty which he has been part of .Its a failure t see the common humanity and a belief in the rightness of your mission that allows this sort of thing to happen . I read somewhere that 10% of the population is capable of atrocity if the right conditions are in place . e forget that at our peril . Look what happened a Germany a cultured well educated society.It happened in the Balkans as well . JUst awful but seemingly a part of human nature .

there is good reason for a Syrian leader to be mortally afraid of being overthrown and possibly executed.
Shukri al-Quwatli first President of Independent Syria who took office in 1945, was ousted from power within a few years.
Husni al-Za'im second President, was overthrown and executed in 1949.
Adib Shishakli, the 7th modern President, exiled himself during a coup in 1954.
Nazim al-Kudsi the 13th modern President was defeated in a 1963 coup etc etc.

Until Hafez al-Assad and later his son Bashar, no president had lasted more than a VERY short time. So all leaders would be totally paranoid in Syria, yes indeed. Does that excuse psychopathy?