Porto in Portugal - one of the loveliest cities in Western Europe

A settlement called Portus Cale was founded on the north bank of the Duoro River in the C4th BC. But nothing much was known before Porto was recovered in 868 AD from the Moorish empire. 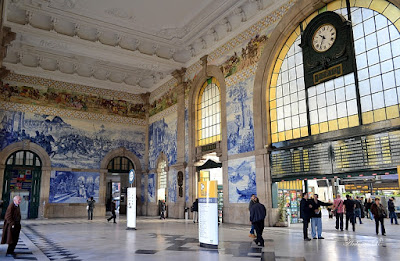 Prince Henry the Navigator (1394–1460) was born to English Queen Philippa and Portuguese King John I who had earlier married in Porto, creating a political alliance between Portugal and England. It was Prince Henry who, in the new Portuguese Empire, initiated the Age of Discoveries. Henry supervised the early development of Portuguese exploration and maritime trade with other continents through the exploration of Western Africa, Atlantic Ocean islands and the search for new routes. Only thus did Portugal become a sea-trade force, so it is appropriate that a statue in a park honours Prince Henry still today. 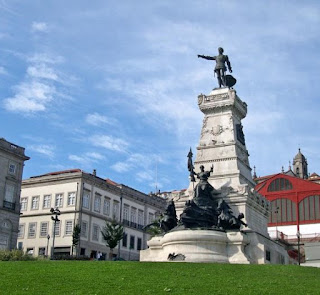 pointing to a far-off place across the Atlantic

Once Portugal became an economic power in the age of the great geo­graph­ical discoveries (C15th – C17th), it was Porto that became the largest shipyard of the country. The town was ready for the the estab­lish­ment of Duoro’s wine region and port wine trade.

The granite streets are everywhere but focus on the grand avenue Rua das Fl­ores, once it was refurbished: its frontages now shine with restored tiles in blues and greens. The avenue is lined with stately stone facades and dominated by the town hall. Granite churches also display glazed blue and white tiles.

Of great beauty is the Capela das Almas/Chapel of Souls near the city’s main shopping street, Rua Santa Catarina. The chapel has its origin in an old chapel made of wood, built to honour Santa Catar­ina. The construction of the building that exists today dates back to the later C18th, when the Brotherhood of the Souls and the Chagas of San Francisco moved from the Monastery of Santa Clara to the Chapel of Santa Catarina. Capela das Almas’ exterior tiles, painted with scenes from the liv­es of saints, are inter-war. 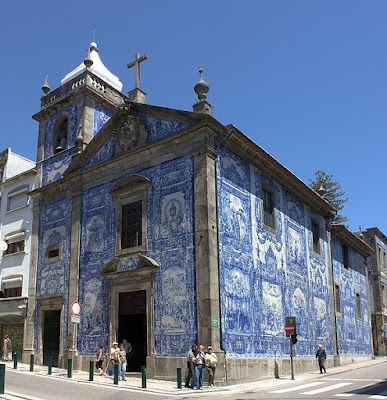 Visit the Church of St Francisco, the only Gothic church in Porto; the severe, grey exterior has richly gilded, highly ornate, baroq­ue wood carvings inside. Porto’s craftsmen in 17th and early C18th were special.

Sao Bento Railway Station was built on the site of a Renaissance Benedictine monastery. Work began on the terminal in 1900, in the French Beaux Arts architectural style. São Bento mainline’s central station is one of the most beautiful in Europe, displaying 20,000 glazed azulejos-tiles that, by 1916, de­picted­ highlights of the nation’s history.

The Monastery da Serra do Pilar is a C16th former monastery is the architectural highlight of the Gaia side. Belonging to the Order of Saint Augustine, the church was made in a circular shape and was covered by a hemispheric vault and balcony. It took 72 year to com­plete because of financial difficulties and because of the polit­ic­al turmoil between Spain and Portugal.

Some fine architecture was built during the early C18th, including Clerigos Tower. Climb the Tower, the city’s most prominent land­mark; it was built by Florentine architect Nicolau Nasoni­, a man who was buried in the adjoining church. It is Porto’s best example of baroque architecture and is the tallest tower in Portugal. 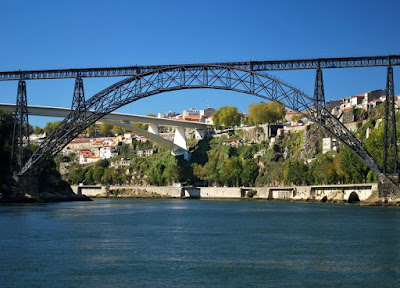 To cross to the other side of the river, there is a choice of bridges. Dona Maria Pia, designed by Gustave Eiffel and built in 1877, is a rail­way bridge over the Portuguese northern municip­al­ities of Porto and Vila Nova de Gaia. Another bridge, the Dom Luis I, boasts one of the biggest forged iron arches in the world.

Two water taxis cross the river as an alternative to the bridges, inspired by the design of the old rabelo cargo boats. River taxis are convenient for exploring the city on foot, with a dock at the Ribeira. The view of the city is best seen from the other side of the river, Vila Nova de Gaia, where the coloured, narrow dwellings stand out. 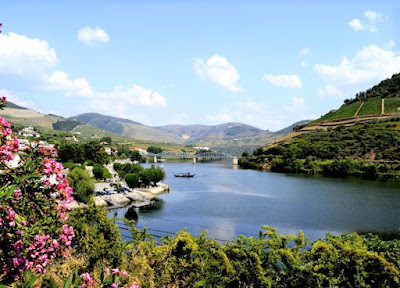 
The Douro Valley is at the heart of the country’s wine industry and its namesake waterway is becoming the hottest ticket for European river cruising. These journeys take the visitor through rural idylls and rugged terrain, stopping at charming towns and villages. Discover the beauty of the Portuguese countryside during this full-day trip through the Douro Valley from Porto. Travel through sweet villages such as Pinhão, Régua and Lamego.

Book for a longer (eg 8 day) river cruise along the Douro River to see some of the most gorgeous natural scenery across Portugal, and sip on locally made port wine during a tasting session. Visit three vineyards to taste world-class wines while ad­miring scenic views from the Douro’s terraced vine yards. And have traditional lunches in the charming villages. All the major river-cruise operat­ors organise Douro trips from late March to Nov eg  Spain & Portugal Travel Connection or Euro River Cruises.

As well as drinking a LOT of port, we also enjoyed buying Claus Porto hand-crafted soaps, permeated with fragrances drawn from the Portuguese country side and hand-wrapped in Belle Epoque papers. 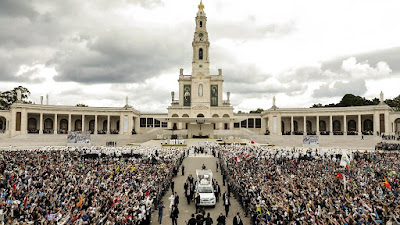 On the last day in the north, en route back to Lisbon, we visited the univers­ity town of Coimbra on a day trip of cultural experiences.  Even further south we explored one of Portugal’s most holy sites Fatima. We watched people attending mass at the basilica inside the Sanctuary of Our Lady of the Rosary. This was where the Virgin Mary appeared to three shepherd children in October 1917.

Hello Hels, Your post reminds me of Emily Kimbrough's 1961 book, Pleasure by the Busload, about her and her friends' extensive tour of Portugal, covering not only the cities, but the countryside, people, customs, food, etc. It is typical Kimbrough, the only jarring note being her repeated disdain of castles, surely a prime feature of Europe in general, yet she still manages to get in some humorous anecdotes about them.
--Jim

Clerigos tower has 250-300 steps. My grandchildren ran up them, the children walked briskly and I strolled more slowly. The view was worth it.

That must have been quite a trip - wonderful! Some great photos. And, of course, port...great with a little Stilton or, if you really must, on its own...

Sold! I have visited the Algarve on many occasions and we always say that we should visit Lisbon. Now it can be a two-centre holiday or a river cruise. I particularly enjoy spending time in Portugal. We visited a very unusual Sephardic cemetery in Faro a few years ago.
The people tend to be laid-back and charming and pro-British; that's a trait I like!
CLICK HERE for Bazza’s trenchant Blog ‘To Discover Ice’

It is a wonderful city for tourists, and come they do, many of them. I really wish we had more than two days there.

I am not familiar with Pleasure by the Busload, but I often try and follow up on your reading recommendations. Which castles did she dislike - active royal homes that are rich, privileged and exclusive? or medieval fortresses that were often the sites of battle?

in 1966, my first trip abroad, mum gave some great travel advice:
1. wear tennis shoes everywhere
2. wear a sun hat
3. if you have to climb steep heights, rest often and sip plenty of water.

The view was indeed worth it.

if you love port, read a post I wrote called Portugal's gift to the world - port wine.
http://melbourneblogger.blogspot.com.au/2012/10/portugals-gift-to-world-port-wine.html

All of Porto's wine cellars are located right on the riverbank of Vila Nova de Gaia, and they presented the tasting sessions in a delightful way - educational and innovative.

Portugal’s recent Law of Return was to apologise for the terrible expulsion of Portugal’s Jews and to bring back as much of the culture that the country lost back in 1496. Porto's community synagogue was built in the 1930s, fell apart and is again very large and beautiful. The attached museum displays art, books and documents that focus on community life that once thrived in Porto.

I hear you, brother! It is always a question of how to allocate the limited time available before going home, knowing that you probably won't be back in that country for another 10 years or more.

The beloved and I had exactly a fortnight for Barcelona, Lisbon and Porto, so we too allocated only 3 days in Porto. It was a difficult choice, given that Barcelona and Lisbon are seductive tourist destinations. Fortunately we had spent a month in Spain on an earlier trip and, except for Barcelona, had seen most of our favourite places back then.

He didn't. There was a competition for the Mia Pia Bridge which Eiffel won. But his partner, Seyrig, played a very important role, doing the 3-dimensional models, measurements, drawings and presentations. Eiffel didn't mind at all - Seyrig and Eiffel had become partners in 1868.

Hello again, Let me have the pleasure of introducing you to Emily Kimbrough. Although perhaps you might not like her books, if you are expecting scholarly volumes set with social and political issues. Her books are the lightest of light reading, but she does manage to cover a lot of territory other than geographical. I am afraid that her castle-phobia involves their high perches and innumerable steps.

Kimbrough is more like a kindly aunt. She toured different places with groups of congenial friends, and her books are much about their adventures and personalities. The Portugal trip group included the Jewish Greek pianist, Gina Bachauer, and her husband, conductor Alec Sherman.

bless your heart. I love travel books and don't need them to be scholarly at all. As long as they include the information about the history of a city and all the details about the main architectural treasures - who designed the building? who commissioned the architect? when? and if any renovations have been done since?

Even then, the best part of most cities are the beaches, markets, churches, museums, galleries and pubs :)

This sounds like a wonderful trip to a place I have not yet visited. You have shown us some great photos of your journey :-)

Isn't it strange that even experienced travellers go to Spain, France and UK regularly, but not to Portugal. For me thus was even stranger since I was fascinated by the notion of a tiny European country being explorers and settlers in the New World.