First women in the world to be enfranchised - New Zealand 1893

As in other European societies, New Zealand women were excluded from any involvement in politics in early colonial times. Most people accepted the idea that women were naturally suited for domestic affairs i.e home and children. Only men were fitted for public life and the hurly-burly of politics. New Zealand History has provided the first half of this post.

Some women began to challenge this narrow view. New opportunities were opening up for women, especially those from upper or middle-class families, in education, medicine, church and charities. Attention soon turned to women’s legal and political rights.

The suffrage campaign in New Zealand began as part of a broad late C19th movement for women’s rights that spread through Britain and its Empire, the USA and northern Europe. This movement was shaped by two main themes: a] equal political rights for women and b] a desire to use them for the moral reform of society eg through prohibition. 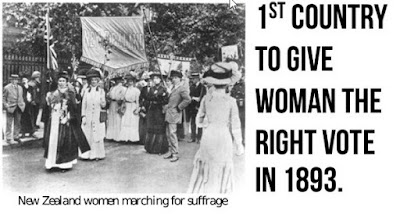 New Zealand’s pioneering suffragists were inspired both by equal-rights arguments of philosopher John Stuart Mill and British feminists, and by the American-based missionary efforts of Women’s Christian Temperance Union - WCTU.

Some of New Zealand’s leading male politicians, including John Ballance, supported women’s suffrage. In 1878, 1879 and 1887 bills or amendments extending the vote to female ratepayers only narrowly failed to pass in Parliament.

Outside Parliament the movement gathered momentum from the mid-1880s, especially following the establishment of a New Zealand WCTU in 1885. Led by Kate Sheppard, WCTU campaigners and others organised huge petitions to Parliament: in 1891, in 1892 and finally in 1893 tens of thousands of signatures were obtained, a quarter of New Zealand’s adult European female population.

By the early 1890s opponents of women’s suffrage were mobilising. They warned that any disturbance to the natural gender roles might have terrible consequences. The liquor industry, fearful that women would support growing demands for Prohibition, lobbied sympathetic Members of Parliament and organised counter-petitions.

The suffragists’ arch-enemy was Henry Smith Fish, a boorish Dunedin politician who hired canvassers to circulate anti-suffrage petitions in pubs. But this tactic backfired when some signatures proved to be false or obtained by trickery.

The Liberal government came to office in 1891 and was divided over the issue. Premier John Ballance supported women's suffrage in principle, but he was anxious that women would vote for his Conservative opponents. Many of his Cabinet colleagues, including friends of the liquor trade, strongly opposed women’s suffrage.

In 1891 & 92 the House of Representatives passed electoral bills that would have enfranchised all adult women. But on each occasion opponents sabotaged the legislation in the conservative upper house, the Legislative Council.

In Ap 1893 Ballance died and was succeeded by Richard Seddon. Suffragists groaned, but following the presentation of the massive third petition, another bill easily passed in the House. Once again, all eyes were on the Legislative Council. Liquor interests petitioned the council to reject the bill. Suffragists responded with mass rallies and telegrams to members. They also gave their supporters in Parliament white camellias to wear in their buttonholes. 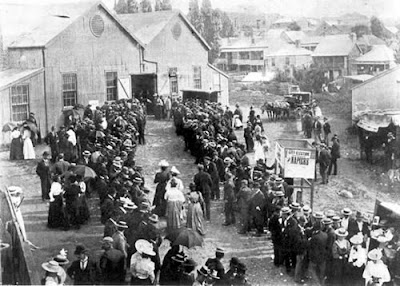 Voting in Auckland, 1899
photo credit: Ministry for Culture and Heritage

For the women of New Zealand, Sept 1893 was a special time. Seddon and others again tried to torpedo the bill by underhand manoeuvres, but this time their interference backfired. Two opposition councillors, who had previously opposed women's suffrage, changed their votes to embarrass Seddon. The bill was passed by 20 votes to 18.

The battle was still not over. New anti-suffrage petitions were circulated, and some members of the Legislative Council petitioned the governor to withhold his consent. In a buttonhole battle, anti-suffragists gave their parliamentary supporters red camellias.

Lord Glasgow finally signed the bill into law in Sept. Women celebrated throughout the country, and congratulations poured in from campaigners in Australia and overseas: New Zealand’s achievement gave new hope to women struggling for emancipation across many countries.

Not everyone in New Zealand rejoiced at the outcome. For some men at least, the prospect of such activists influencing politics was an evil thought. Men opposing female suffrage could only call in the aid of the women who would prefer to leave the game of politics to men.

Suffrage opponents had warned that delicate lady voters would be jostled and harassed in polling booths by ‘boorish and half-drunken men’. But the 1893 election was actually described as the ‘best-conducted and most orderly’ ever held in New Zealand.

Invigorated by the New Zealand suffrage victory in 1893, Mary Lee and Elizabeth Nicholls, like many other WCTU activists, travelled all over the South Australian colony to obtain signatures for a suffrage petition. The WCTU suffragists were critical to the success of the campaign, first in South Australia and, eventually, nationally. So it is not surprising that in Australia, women were first able to vote in the State elections of South Australia in 1894.

Western Australia followed in 1899. But it was only in 1902 that the newly federated nation allowed white women to both vote and stand for Federal elections on a universal and equal basis with white men. This dual right, the complete electoral franchise AND eligibility to sit in parliament, was what political philosopher John Stuart Mill called perfect equality. In New South Wales women gained the vote for State government in 1902, in Tasmania it happened in 1903, in Queensland in 1905 and Victorian women gained the vote for state government in 1908. Indigenous Australians were excluded from Federal elections for decades more. 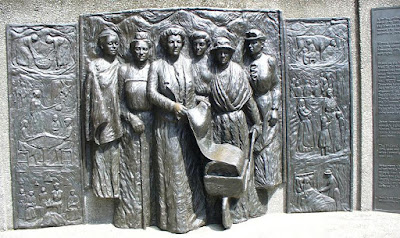 The Christchurch Memorial, made by sculptor Margriet Windhausen,
3.3 x 2m bronze bas-relief.  Unveiled 1993.
The camellia and white ribbons were symbols of the suffrage campaign.

In the same year, 1902, Vida Goldstein was in Washington DC as Australia and New Zealand’s sole delegate to the International Woman Suffrage Conference. She addressed huge American audiences on one of the most pressing global issues of the day: Votes for Women. Alas by 1908 only Finland and Norway had joined New Zealand and Australia in enfranchising women.

Well done to New Zealand and not so much later, Australia. It just occurred to me that when my grandmother was born, she never had the right to vote. It wasn't really that long ago.

Why was South Australia so progressive?

To Deb: Although I'm from Victoria, I've always thought of SA being very progressive, particularly during Don Dustan's time.
A very enjoyable and informative read Hels.

That is such a good point. We are only removed from non rights for women by two generations. In the history of the world, two generations is nothing.

My grandmother was born in 1903, 14 years before Russian women were given the vote. They had cinema, cars and type writers, years before they got the vote :(

There were suffragette societies in every colony/later state, but South Australia seemed to have better organised and better supported communities. For example the Women's Christian Temperance Union of South Australia was totally committed to both temperance and women's suffrage. The petitions to the S.A parliament were huge, and could not be ignored.

In the 1960s we thought that women had achieved total equality. We kept our own maiden names, worked with equal pay and equal superannuation, got reliable contraception etc. Yet sexual abusers like Mr Weinstein and Mr Burke have shown that women are still far from equal.

Thank you, Vida Golstein and Mary Lee. Keep on inspiring us 120 years later.

An interesting history, thank you :-)

And in the UK women were not enfranchised until 1918 and then only if 'householders' and over 30. It was another full decade before it became universal here. So: well done to those early forward-thinking women in New Zealand and South Australia. The pioneer spirit must have been strong in those days! I am loving the variety of topics that you post Hels.
CLICK HERE for Bazza’s curious Blog ‘To Discover Ice’

Thank you. I take my blog material from my lecture notes. That has two advantages: firstly I don't have to do a lot of re-writing and secondly the students tell me which topics are interesting and which are less interesting :)

I remember seeing British cartoons opposing women's suffrage in the Edwardian era. They depicted politically active women as ugly, self-centred and too busy to care about their starving husbands and babies.

I found this in Women & Politics in South Australia http://www.slsa.sa.gov.au/women_and_politics/why_sa.htm.

Why did the early granting of women's suffrage happen in South Australia, before any of the other states in Australia? South Australia is a special place, socially and politically. It has a long history of social reform. Unique in the history of Australia—the only Australian state not established as a British penal colony, but something of a social 'best practice' development, with its capital Adelaide a model of town planning, "the garden of Paradise".

Unique in the history of the world—the first representative government in the world to allow women to become Members of Parliament, and the third in the world to give women the right to vote "on the cutting edge of democracy". A special place for the development of social and political rights—South Australia although small in population has always been a place where liberal moderate views and free thinking have been strong in the community, and has played a special place in the development of women's issues "a sense of conscious difference".

the South Australian page is rightly very proud of the state's social and political progressive history.

But I am not sure about differentiating between states that were originally established as British penal colonies Vs those that were not. NSW and Tasmania DID receive their convicts directly from Britain from the very beginning, as did WA decades later. Queensland and Victoria only accepted a small number of convicts later on, mostly from NSW.