The 1889–1890 Flu Pandemic was similar to the great Spanish Flu pandemic and might have prepared doctors and armies in WW1. It was first noted in different countries: China (1888); Athabasca in Canada (May 1889); Greenland (summer 1889), Tomsk in Siberia and Bukhara in Uzbek­istan (Oct 1889), St Peter­sburg in late Oct 1889, and expanded rapidly via railway across Europe. In Paris, the first cases were recorded on 17th Nov; in Berlin and Vienna on 30th Nov; in London in mid Dec, and in southern European countries in late Dec. The flu spread overseas to Boston and New York in Jan 1890. And then throughout North and South America, Africa, Asia and Oceania by mid 1890. The most tragic period was between Dec 1889 and Jan 1890; the majority of the million deaths were older than 50.

So how different was the Spanish Flu Epidemic of WW1? Even before the arrival of air travel, Spanish flu swept around the world in just 3 catastrophic months from Oct 1918 to Jan 1919 - and killed more people than WW1 had.

The 1918 flu came in two waves. The first wave was a benign bout that began in March 1918 in Spain. The epidemic was remarkable for the millions of victims struck down; high temp­er­atures; aching limbs; headaches and sore throats. Mostly the ill­ness quickly passed and few deaths occurred.


An early pandemic occurred in the British military base at Étaples (1916–1917) in North France. This military base, situated near sea mar­sh­es with migratory birds, was occupied by 100,000 soldiers within 12 sq ks.  Presumably the epidemic came from a mixture of very crowded sold­iers, ? infected birds and mutagenic war gas. Or perhaps the virus originated with pigs kept near the British troops at the camp, and then jumped species over to humans.

As France lost its own men in The Great War, hund­reds of thousands of troops in indigenous army units were organised in the French col­onies in Africa, Asia and Oceania. Of the 50,000+ Indo-Chinese sold­iers sent from the old Annam kingdom (now Vietnam-Laos-Cambodia) to France, half of them were assigned to active battalions, or as nurses and lorry drivers on the Front. But was there a connection with flu?

Medical records reported that an American flu epidemic began in Feb 1918, in Sing-Sing Prison in New York. Others mentioned an acute infect­ious outbreak among young farmers in Haskell County in Kansas. This too occurred in Feb 1918, especially once these young farmers en­listed and were incorporated into Kansas’ Funston military camp. The later link to the Spanish Flu in Europe might have been explain­ed in terms of the Chinese workers in Kansas i.e to the new c­om­­b­in­ation of viruses  of Chinese and Indochinese origin
. 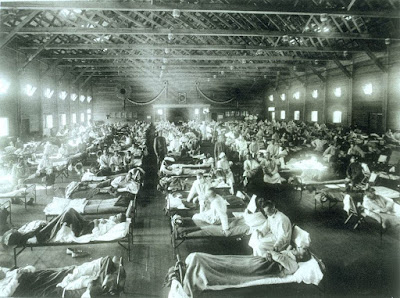 The Paris ASSA archives affirmed that the first cases of flu in France appeared in the Third Army in Villers-sur-Coudun and in the Fère-Briange training field in April 1918. At the same time, flu broke out in the American army which was based in the outskirts of Bordeaux. And there were flu cases reported in 1st and 2nd battalions of the British army in France, in the German army at the Western front, and in the Military Hospital of Cabour in Belgium. Without a vaccine or antibiotics, public health authorities watched as the pandemic raged. People best avoided in­f­­­ection via face masks and staying away from crowds.

But after a period of calm in mid 1918 the virus mutated, becoming extremely virulent. This more deadly second wave probably first start­ed in Spain. Thus the label “Spanish Flu”. Spain had been neut­ral in the Great War, but it permitted the pass­age of Portuguese troops, workers and merchandise towards Fran­ce. This important com­munic­at­ions hub between the Iberian Peninsula and Paris was in the Basque Count­ry, at the outlet of a marshy bird-filled river - a frontier region that could have been one of the places in which the virus mutated and became in­v­asive.

From Oct 1918 on, the flu mov­ed to the general population across Spain, eventually affecting Portugal, then French and Italian cities. Frightening mortal­ity quickly emerged. Fluid entered the lungs; faces turned blue; the cough brought up the blood-stained sputum and the feet turned black. The lucky victims quickly drowned in their own lungs. The unlucky victims developed bact­er­ial pneumonia as an agon­is­ing secondary infect­ion. In the morning, the dead bodies were stack­ed about the morgue. But between the speed of the flu outbreak and effective military cens­orship in WW1, families didn’t know what had happened to their loved ones.

The Allies had been boosted by hundreds of thousands of strapping young American recruits pouring into France aboard every trans-Atlantic troopship. How tragic it was that these fit young men who appeared most suscep­t­ible to the flu virus; in the crowded troop ships and training camps they fell ill and dropped dead. In October 1918, while 50,000 Americans died in battle, 70,000 of them were hospit­al­ised with flu, of whom 32% died. The Allied offensives almost ground to a halt because so many soldiers were sick. Had the Allies known it, the starving Germans were worse off. 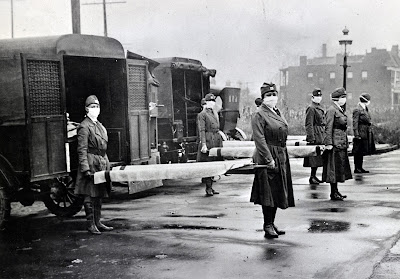 The Great War, which had ravaged Europe for four years, was end­ing. But in the week in which The Armistice was signed, 11th Nov 1918, flu deaths in Europe reached their peak. British prime min­ister and US president, who met in Paris to design the Treaty of Versailles, both caught the flu and lived. But Sir Mark Sykes, whose Sykes-Picot Plan was to carve up the Middle East, died from flu.

I thought snow protected citizens against the flu, but the Spanish flu reached Sweden in June 1918, and a one-third of the population became infected. c34,500 persons died from flu during the pandemic or from acute pneumonia.

A milder third wave occurred in early 1919, while the fourth wave spread during early 1920. The majority of those who died were young, healthy adults aged 15-44 but mortality rates varied between countries. By the end of the epidemic, in less than 2 years, 50+ million people had died world­wide.

Summary
The Spanish Flu pand­emic was inext­ricably linked to the millions of young men in army barracks, military camps and trenches; this is where the Flu virus developed, became virulent and spread worldwide in Oct-Nov 1918. Soldiers and workers, from Europe, Asia, America, Africa and Oceania, mixed on French soil. The causal fact­ors were poor liv­ing conditions, stress, fear, war gases used indis­crim­inately, shocking winters, and contact with birds and pigs.

Thanks to the main references: "Origins of the Spanish Flu pandemic (1918–1920) and its relation to the WW1" by Anton Erkoreka and "When the World Sneezed" by Nigel Jones in History Today magazine, 5th May 2009.

I remember after medieval wars that crops and animals were destroyed and famine was common. Quite like the Spanish flu after WW1, this could be followed by TB, small pox and typhoid. Nothing changes.

When we hear about constantly occurring disasters all over the world the follow-up is often news of disease such as typhoid. What happened with the Spanish Flu epidemic is still a real possibility even today.
However, I will be getting my annual NHS flu vaccination shortly (even had a one-off for shingles last week).
CLICK HERE for Bazza’s tatterdemalion Blog ‘To Discover Ice’

It's frightening to think of how now, so quickly these waves of 'flu could travel around the world. Three months might now equal three days.

You are particularly correct with the Thirty Years' War 1618-48 - it devastated entire regions, with famine and disease in Bohemia and the German & Italian states. Fighting men looted farms to feed themselves, leading to poverty and starvation for the population of occupied territories. Troop movements and fleeing civilians carried typhus with them.

We have learned very little, it would seem.

Agreed! The Public Health Report says that the 1918 pandemic virus was an H1N1 strain of influenza A virus. H2N2 viruses emerged later and they were replaced by H3N2 pandemic viruses. And from 1977 both influenza A subtypes H3N2 and H1N1 have co-circulated in humans. Change as it may, we humans have an absolute obligation to protect ourselves and our families with the most up to date vaccinations.

air travel has changed everything, yes. As men marched on foot in 1918, the killer flu mov­ed to the general population across Spain, then Portugal, French and lastly Italian cities, taking months. Nowadays you could be in Auckland today and in Stockholm, Edinburgh or Toronto tomorrow.

This is a very interesting topic which I have only just managed to read . The last known flue virus from that pandemic was found in bodies which were dug up from a cemetery in the Arctic circle where the permafrost had preserved the virus .I think the aim was to do a DNA examination to work pout why this particular strain was so dangerous. No doubt it was partly the terrible conditions but it also killed a lot of people here in Australia where conditions were much better . Apparently the flue kills by causing a massive autoimmune response in some otherwise well fit young people and in other cases it causes secondary infections which were fatal then due to not having antibiotics . We seem to be heading back to pre -antibiotic conditions which is rather scary .apparently immunization will only cover 60% of the risk of getting flue as it isnt a live vaccine . I know I got a shot and still got it this year but maybe not as badly as others=wise . We all need to wash our hands A LOT its the best way of preventing illness and making sure we avoid touching our faces .

the most compelling comment was regarding our generation perhaps heading back to pre-antibiotic conditions.. which is VERY scary! If immunisation only covers 60% of the risk of getting serious flu these days, we have to assume that the strain of influenza is changing faster than the vaccine manufacturers can keep up.

My grandfather remembered the dead bodies lying around very clearly :(

The Spanish flu of 1918-1920 was one of the greatest human disasters of all time. It infected a third of the people on Earth--from the poorest immigrants of New York City to the king of Spain, Franz Kafka, Mahatma Gandhi and Woodrow Wilson. But despite a death toll of between 50 and 100 million people, it exists in our memory as an afterthought to World War I

In this gripping narrative history, Pale Rider: The Spanish Flue of 1918 and How it Changed the World, Laura Spinney traces the overlooked pandemic to reveal how the virus travelled across the globe, exposing mankind's vulnerability and putting our ingenuity to the test. As socially significant as both world wars, the Spanish flu dramatically disrupted--and often permanently altered--global politics, race relations and family structures, while spurring innovation in medicine, religion and the arts. It was partly responsible, Spinney argues, for pushing India to independence, South Africa to apartheid and Switzerland to the brink of civil war. It also created the true "lost generation." Drawing on the latest research in history, virology, epidemiology, psychology and economics, Pale Rider masterfully recounts the little-known catastrophe that forever changed humanity.

Thank you. I will check whether the library at work has a copy of the Spinney book.