Queen Victoria gave royal assent to the British North America Act, so that Canadian Confederation could oc­cur. 150 years ago in July 1867 the old province of Canada was divided into Ontario and Quebec; and along with the British colonies of Nova Scotia and New Brunswick, Feder­ation appeared. One Dominion of Can­ada, consisting of the 4 provinces!

Manitoba joined in July 1870, British Columbia joined in July 1871. The Terms of Union negotiated by the governments of Canada and Brit­ish Columbia included a Federal commitment to quickly build a rail­way connecting British Columbia to the railway system of Can­ada. Prince Edward Island joined in July 1873, once there was a guarantee by the federal government to operate a ferry link or, later, Confederation Bridge in 1997. Alberta and Saskatchewan finally con­federated in September 1905 and New­found­land in March 1949. Nunavut officially separated from Northwest Territories in 1999.

Over the years since Confederation, Canada has seen numerous territ­orial changes and exp­an­sions, resulting in the final union of ten provinces and three territories in 1999. It became a unified nation by gradual consent, not by war.

In 1925, Prime Minister William Lyon Mackenzie King established a committee to design a truly Canadian flag. Despite the failure of that committee, citizens still wanted to fix the flag problem and new designs were proposed for decades later. After comm­it­­tee meetings in the early 1960s, Elizabeth II Queen of Canada proclaimed the new flag in January 1965.

The Centennial in 1967 was when most people believed they were look­ing at being distinctively Canadian and actively creating a Canadian identity. So Expo 67 was a World's Fair held in Montreal from Ap-Oct 1967. With pavilions from 62 nations and 50.3 million visitors, Expo 67 was con­sid­ered to be one of the most successful World's Fairs of the C20th. 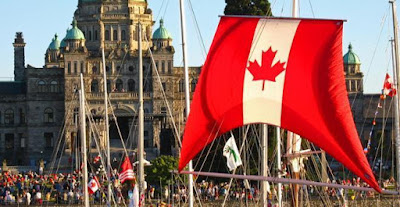 Canada Day in Victoria BC

Recently Doug Saunders reviewed the 1967 Centennial. The postwar decades, he said, were defined by large-scale decolonisation around the world: Across Africa, Asia and the Americas, scores of countries were freeing them­selves from centuries of control by European masters and struggling, sometimes violently, to find ways to govern themselves as independent entities. People were learning to think of themselves not as colonial subjects but as autonomous communities in self-created states.

But the battle over symbols was one small manifestation of a larger shift. After the Centennial, Canada started to seriously con­front the divisions and gross inequities that had been masked in the past, ben­eath a patina of colonial gloss. Canada would have, over the next 50 years, two secession crises - a battle over the North American econ­omic identity and a hard-fought political reawakening of Canada’s indig­enous nations. Yet these were the crucial struggles of becoming a real country, of finding a governing mechanism and a common culture to bring together those long-disparate peoples.

Leaders liked to believe that starting in the late 1960s, a series of political decisions, parl­iam­entary votes, court rulings and royal commissions descended upon an innocent, paternalistic, resource-economy Canada and forced upon it an awkward jumble of novelties: non-white immigration, bilingualism, multiculturalism, refugees, indigenous nationhood, liberation of women and gays, the seeds of free trade, individual rights and relig­ious diversity. But the great majority of Canadians had already moved on; one could see the 1967 centennial struggling to catch up with them.

So the 150th celebrations will need to be different from the 50th. This year, 2017, the Celebrate Canada festivities will be bigger than ever! They will highlight the evolution of the country from its Indig­enous origins; the history with the French and the birth of Canada’s Francophone heritage; through to more recent waves of immigration that have led to the development of a modern society. Diverse, inclusive and democratic! 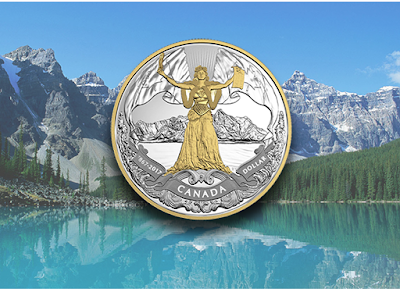 A new silver $1 coin that celebrates the 150th anniversary of Canadian Confederation.

The Government of Canada, by Royal Proclamation, designated 27th June as Canadian Multi-culturalism Day. This is an opportunity to celebrate diversity and commitment to demo­c­racy, equality and mutual respect, and to value the contributions of the various multicultural communities to Canadian society. This year, major celebrations will be in three Canadian cities with live perform­ances.

These major celebrations will culminate in Canada Day (1st July), a time to celebrate the heritage passed down through the works of authors, poets, artists and performers. It is a time to rejoice in the discoveries of scientific research­ers, in the success of entre­preneurs, and to commemorate the nation’s history. A full weekend of activities is planned for Canada’s Capital Region (Ottawa–Gatineau metropolitan area) to celeb­r­ate Canada Day. Celebrate the shared achieve­ments which were born in the ancestors’ vision and which are voiced in every language through the contribution of New Canadians.

As the birthplace of Confederation, Charlottetown always enthusiast­ic­ally celebrates Canada Day. A ten-hour concert will showcase Prince Edward Island’s musical talent with everything from jazz to fiddles to rock. The city’s harbour will also be a guest port in a trans-Atlantic 150th Celebration Regatta, bringing forty tall ships and a waterfront festival focusing on Canada’s historical seafaring.

Canada in general and British Columbia in particular is one of my favourite places to have visited. After spending some weeks in the United States we crossed into Canada and were immediately impressed by what we saw as the same high-standard of living but with the veneer of European, especially British, civilisation. When I visit relatives in Vancouver I can see why they love the place so much, as do I. It's on a par with Melbourne!
I am pleased to celebrate 150 years of Confederation and wish them more of the same for an infinite future.
CLICK HERE for Bazza’s Crapulous Blog ‘To Discover Ice’

Spot on! When my mum's family left Europe, the choice was largely Melbourne or Winnipeg. So I have been to Canada many times, and loved it. The generation of cousins born in Canada didn't like Winnipeg so much and moved to universities in Vancouver, Toronto and Chicago.

Hello Hels, Growing up in Cleveland which is very close to Canada, we had many chances to enjoy the unique Canadian experience and to see their different culture. You definitely feel te difference once you cross the border. My favorite Canadian memory is a canoe trip there--in two weeks of traveling we did not come across another person.
--Jim

It's disappointing to read that someone's relatives "didn't like Winnipeg so much". It's a relatively affordable and cultural city - go visit!!

I have enjoyed many luxury train trips, but none as much as across Canada. Happy Canada Day

I often wonder if US citizens look across their northern border with envy. I suppose Canadians pay more tax, but that is what makes a civilised and caring society. Two years ago we were there for Canada Day and saw a parade and what a happy occasion it was. Btw, the first satellite tv broadcast to Australia was from the 1967 Expo in Canada, via the US and outback Australia, to ABC Sydney studios for sending around the country.

crossing the border and feeling the different culture is an interesting concept. I have lived most of my adult life in Australia or Britain, both countries with no border. This was a very different experience from both our families who lived in Eastern European countries with constantly moving borders. I thought about this very idea in a discussion on Alsace Lorraine.

But for Canada, we also need to think about the cultural differences BETWEEN provinces. The entire nation may be celebrating Saint-Jean-Baptiste Day with joy this year, but it was not so long ago that Quebec got within a hair's breath of leaving Canada altogether.

I have been to Winnipeg three times since 1991, and had a truly super time at every family reunion. My aunts and cousins were gracious hosts and on top of the family connections, we participated in every cultural and religious event the city had to offer.

But for ambitious young Canadian academics and scientists, the other cities I mentioned offered more opportunities. The last family reunion my parents and I went to was in Vancouver. Also a very hospitable city!

it must be a fascinating experience for citizens of the USA, the richest and most militarily influential nation, to go across the border into Canada for a civilised and caring society. And to get health care.

I read a revue of European holiday facilities, asking them "if you had your choice, which nations' citizens would you be happiest to see at your hotel/restaurant/gallery/sports facility etc?" It will not surprise you to see that Canadians easily got first place, Swedes second place and Australians a more distant third.

To display Canada's true multi-cultural status, see Oh Canada sung by a big choir in Yiddish. Our aunts' hearts would have melted.

I had a good listen, many thanks. I love the idea that wherever citizens came from, they never forgot their origins and they never stopped being grateful for Canada for giving them a safe, happy life.

Many thanks to CHRISTOPHER MOORE'S HISTORY NEWS which has great links to Canada's National Aboriginal Day.