The old structures along Barcelona’s Passeig de Gracia were made of wood since they were under the con­stant threat of demolition by government ord­er. A military law was in force that prohibited any struct­ure from being built out­side the city within a cannon shot of its walls, a distance of 1,250 ms.

Barcelona’s aristocracy and bourgeoisie already knew Passeig de Grarci well because they strolled and amused themselves there. Be­fore the start-up of The Cerdà Plan for the Expansion of Barc­el­ona (1859-61), the Eixample district had pleasure gardens (including Prado Catalán, Camps Elisis, Jardí de la Nimfa, Criadero, Tívoli and Español) leading off from the road, with restaurants and theatres. Once the Cerdà Plan put an end to the old restrictions, a new age of building fever started. Now the most prominent families of Barcelona left the narrow Old Town behind them, moving their mansions to this new and more spacious and prestigious area. And the most exclusive stores progressively moved from Carrer Ferran and the Rambla to the new avenue, in the wake of their wealthy clientele. 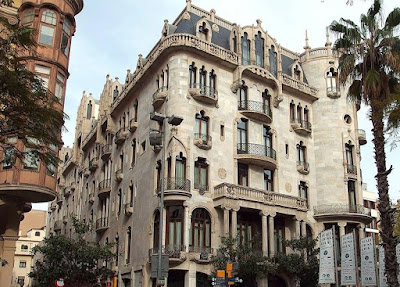 The rediscovery of Catalan Modernisme/Art Nouveau heritage turned Passeig de Gracia, and the whole suburb of Eixample, into a favourite part of Barcelona. Originally these architectural masterpieces were not app­reciated by everyone because they looked fussy and contrived. The French prime minister Georges Clemenceau (1841–1929) visited Passeig de Gracia and was offended by the excessive colours and ornament­ation on the façades.

Catalan architect Lluís Domènech i Montaner (1850-1923) was in charge of a project that started in 1901. The Hospital de Sant Pau/Hospital of the Holy Cross and Saint Paul complex was the most relevant public building of Catalan Art Nouveau. But not all Art Nouveau was the same. Lluis Domènech i Montaner was far more restrained than his Cat­alan contemp­or­ary, Antonio Gaudi (1852–1926). In 1912 Gaudi’s newly finished Casa Mila was derogatorily known as La Pedera/stone quarry.

Mr Mariano Fuster i Fuster, an older, cashed-up businessman from Mallorca, met and adored Ms Consuelo Fabra i Puig, the daughter of the Mar­quis of Alella, in Barcelona. Fuster saw Domènech’s architecture, loved it and put him in charge of a new and ambitious project – a family home at the top of the very elegant Passeig de Gracia. The new casa was to be a gift from Señor Fuster to his beloved wife, with the added (ambitious) goal of making the city of Barcelona more beautiful! Domènech was to design and built the house, under the supervision of Mrs Fuster. In fact Mariano Fuster put the house in his wife’s name. 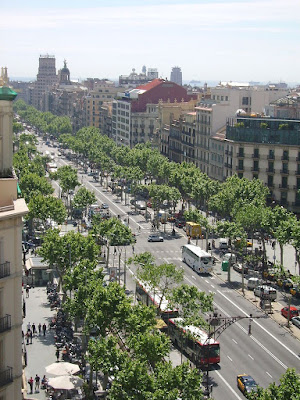 Domenech worked on the building from 1908 to 1911, together with his son Pere Domenech i Roure  (1881-1962) , another architect. By the time it was built, Casa Fuster was considered the most expensive house in Barc­elona. Other citizens noticed that the vast facade of the house was the entirely made with high quality white marble! Other feat­ures of the building were pink columns, trilobate windows and classic floral motifs across the casa’s three facades. The building, topped with a mansard French style, was a dignified masterpiece, the symbol of the greatest period of splendour and prosperity in Barcelona. Inside, the five storeys of designer luxury included the ornate ground-floor salon, used for grand society receptions.

Domènech was influential in the Catalan Art Nouveau movement, yet Casa Fuster also had neo-Gothic elements. Its white marble undoubted­ly gleamed in the sunshine of the Passeig de Gracia, but did the styles harmonise together?

In 1911 the Fuster i Fabra Family moved into their casa. But due to the fearfully expensive construction of the casa, and to the high maintenance costs, the family lived there only briefly .. until the early 20s. This might have been a financial lesson to other ambitious families.

After the family left, their huge lounge room became Café Vienes and other small businesses took over smaller spaces eg a barber shop. Event­ual­ly Cafe Vienes became the favourite place for Catalan bohemians, artists and writers to meet each other. (I have written a lot of posts about Barcelona, but they all concentrate on two things: the arts and the drinks). A dance hall known as El Danubio Azul became very popular in the 1950s, but eventually the building was showing its age.

In 1962, the ENHER electrical company bought the house with the intention of demolishing it and building a sky-scraper. The people of Barcelona were completely against it and thanks to many protests and newspaper articles, the crisis was averted. So between 1962 and 1974 ENHER had to renovate Casa Fuster, at least minimally. 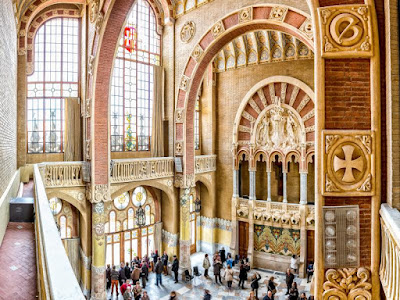 In 1999, the casa was put on sale and the Hoteles Center chain bought it a year later. Casa Fuster was completely restored in 2004 and turned into a grand hotel. Since standard rooms at the hotel begin at €270 a night and suites from €369, spouse and I stayed in Barcelona’s lovely B and Bs instead. But I have examined all the public spaces in the hotel carefully.

The original decorations were not destroyed, in order that the hotel could preserve some of its history. But the 75 rooms and 21 suites are now furnished in Art Deco style with warm tones and elegant materials. The hotel lobby's Art Nouveau shell of black mosaic floor and fluted pillars have been updated with post-modern flourishes, as is the lounge. The hotel’s ten salons have been adapted for seminars and business conferences. Now the sumptuous Café Vienés, which I first saw in Woody Allen's 2008 movie Vicky Cristina Barcelona, hosts a jazz performance every Thursday night. The Galaxó restaurant is splendid.

The hotel is representative of the most prosperous and splendid period of Barcelona. And it is also blessed by its neighbourhood. In easy walking distance are some of Barcelona’s main attractions eg two of Gaudi's major works, the Casa Mila apartment block and the Casa Batllo town house. Visitors can travel east from Casa Fuster, down the narrow side streets, and find the Eixample neigh­bourhood, filled with bars, designer shops and restaurants.

The original architect's son Pere Domènech i Roura went on to design the façade of the Olympic Stadium at Montjuïc, the Casa de la Premsa/Press Hall for the World Fair of 1929 and the Cooperatives Agrícoles at l'Espluga de Francolí and Serral. But the father was more famous. Domènech Senior’s Hospital de Sant Pau and Palau de la Musica Catalana were declared World Heritage Sites by UNESCO. 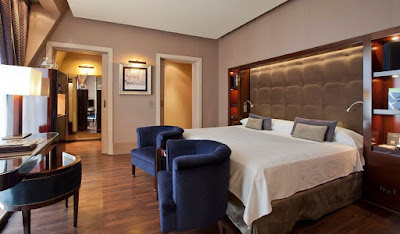 Hello Hels, Casa Fuster is indeed a fascinating building, with many beautiful elements in the rare Art Nouveau architectural style. But it is built on a scale that exceeds the domestic, which is a problem with very expensive or ambitious house-building projects. That is why so many of them become white elephants within a short period--imagine a house which is so easily converted to a hotel! Of course, extra demands were often placed on these huge buildings, which gave them quasi-public status, although this still detracts from their domesticity.

What I find fascinating about certain important houses is how much ornamentation they can supply without acquiring that candy-box or cathedral effect, and how much space they can enclose within which it is possible to imagine a single family living and functioning happily.
--Jim

Imagine what Barcelona looked like during the Civil War, with bombs and street fighting.

We will be sure to at least see the street and the exterior when we visit. It is not too far from where we are staying. The street looks particularly fine, especially as it is without glittering glass towers. How did Australia manage to allow our large city centres to be ruined.

when I visited Hotel Casa Fuster, I felt like the poor Australian cousin coming to visit the respectable and elegant great-aunt. Mariano Fuster i Fuster and Consuelo Fabra i Puig had four children together, but even if each person in the house had 10 private maids, it was still going to be far too huge for a home. No wonder Lluís Domènech i Montaner and his son took years to finish, having to import the best materials from around Europe and the best builders.

Hindsight suggests that if they had been more modest in their building and maintenance costs, the family would have enjoyed the building for much longer (than 9 years).

what a tragedy :( The photos suggest that Barelona looked like a cemetery. In mid March 1938, the city was bombed over and over again by the Italians, but Barcelona had no anti-aircraft artillery. In any case, the Italians used delayed-fuse bombs that passed through the roof and then exploded inside the building, so as to destroy homes and residents on the ground, rather than aiming for military targets. Workers’ homes were particularly targeted.

Barcelona has the most beautiful, tree lined avenues! La Rambla is like a very long pedestrian mall, wide and gorgeous, full of activity. Passeig de Garcia is one of its most important shopping and business areas, but not so touristy and much more elegant. Avenida Diagonal is one of the widest avenues in the city, originally designed for the Catalan moneyed families to parade in their carriages.

And a connection with Melbourne. The Eixample has long straight streets, a _strict grid pattern_ crossed by wide avenues, and square blocks with chamfered corners. Our Robert Hoddle and Barcelona's Ildefons Cerdà might have been soul mates.

I have added an image of a suite, fully finished with Art Deco furniture and room decoration. Room decor is a pleasing combination of pale walls; dark nut brown furniture; geometric lamps, tables and desks; and no colourful paintings or cushions.

Passeig de Gràcia boulevard, not Garcia!, please correct that mistake!. Originally was the road for connect Barcelona and Gràcia, who were two different municipalities until 1897, tle limit between all two is the actual Carrer Provença street, La Pedrera by Antoni Gaudí is just on old Gràcia terrain. Gràcia was one of many cities and towns that today are Barcelonian Districts, for example others are Sants or Sant Andreu, and all are popularly called for this Viles or Antigues Viles, Villages or Old Villages in Catalan.

Sorry about my spelling... I cannot add an accent with my typewriter, but I can certainly spell the boulevard correctly. Thank you.

There are many examples of places on the edge of huge cities that are absorbed into those metropolises and disappear as independent towns. I was thinking of Paris, but Barcelona is another perfect example.