History of the Wannsee Villa homepage says that the beautiful home was first built in SW Berlin in 1914-15. The original owners of the home, merchant-factory owner Ernst Marlier and his wife Margarete, were photo­graphed standing in their front doorway in 1916. The photograph of the dining room shows how the room was fur­nished: Queen Ann chairs, Oriental rug, chandelier and wall tap­estry. The Wintergarten, the sun room next to the dining room, is still lovely. The house had 1,500 sq ms of living space, and a very large garden. One of the great joys of living in Wannsee was proximity to beautiful parks, lakes and beaches.

Ernst and Margarete Marlier sold the house in 1921, to a firm bel­ong­ing to the industrialist Friedrich Minoux. The first important conf­erence was held in this villa in Feb 1923. This was when Minoux mediated an un­successful discussion between the chief of the army command and the former quartermaster general on measures to be taken against the French occupation of Germany’s coal-rich Ruhr region. 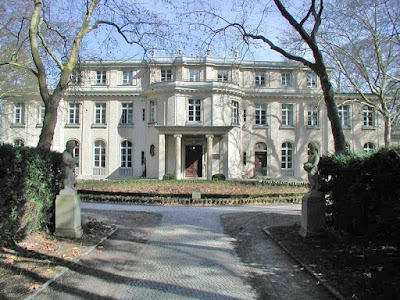 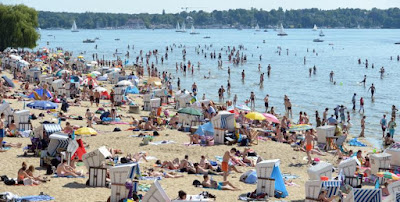 According to the museum, Minoux was also involved in Hitler's failed Putsch in Nov 1923. Minoux believed that "on that date, which was the 5th anniversary of the overthrow of the 500-year old Hohenzollern dynasty of Germany by the Jewish-led Social Democrats", Hitler made an attempt to overthrow the democratic Weimar Republic.

In 1940, Minoux was arrested for fraud and embezzlement in his busin­esses. In Nov 1940 he sold the villa, with all its furn­ishings and art works, to the Nordhav SS Foundation set up by Reinhard von Heydrich. The foundation's role was to build and main­tain vacation resorts for the SS Security Service. Hey­drich, Himmler's second in command of the SS, wanted to use the Wannsee villa for official functions and as a hol­iday resort. It offered renovated guest rooms, a music room, a billiards room, the gorgeous winter garden and terraces facing the Wannsee.

With the invasion of Poland in Sep 1939, the persecution of European Jewry was raised to unprecedented levels. But worse was to come in June 1941 after the onset of Operation Barbarossa against the Sov­iets. On 31st July 1941 Hermann Göring gave written authorisation to Heydrich to prepare and submit a plan - he had to create a Total Solution of the Jewish Question in territ­ories under German control and to coordinate the participation of all involved government organisations. 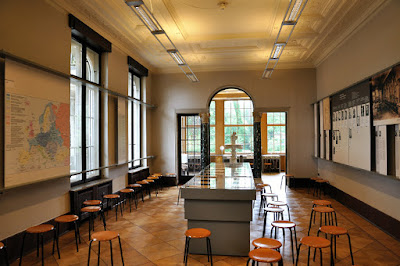 The Wannsee Museum rooms,
as lightfilled and spacious as they were in 1914

Thus the Wannsee Conference. It was a meeting of 15 senior government officials of Nazi Germany and SS leaders, held in the house on 20th Jan 1942. Called by director of the Reich Main Security Office Rein­hard Heyd­rich, the conference was to ensure the cooperation of administrative leaders of various government dep­art­ments, each one an expert on Jewish affairs or European train systems..

It took less than two hours for Heydrich to outline how European Jews would be rounded up from west to east, and sent to the General Government i.e the occupied part of Poland. Once the mass deportation was complete, the SS would take complete charge of the extermination camps.

Many records were destroyed. And it was only in March 1947 that the Wannsee Conference even came to light, by accident. One copy of the Wannsee Protocol with circulated minutes of the meeting survived, found by the Allies among files that had been seized from the German Foreign Office.

In 1965 the villa was proposed as an ideal site for the study of Nat­ional Socialism and its Consequences, organised by historian Josef Wulf and largely financed by the World Jewish Congress. But the Ger­man gov­ern­ment was not prepared to allow the Jews to buy the property or use it as a document centre. Only on 20th Jan 1992, EXACTLY on the 50th anniversary of the conference, the site was finally opened as a Holocaust Memorial and as the House of the Wannsee Conference Museum.

Most of the ground-floor rooms have large panels on the walls with text about the Nazi era and the Holocaust, along with a collection of pictures related to the evacuation of the Jews, as planned at the Wannsee Conference. The Joseph Wulf Bibliothek-Mediothek on the second floor houses a large collection of books on the Nazi era, plus other materials such as microfilms. 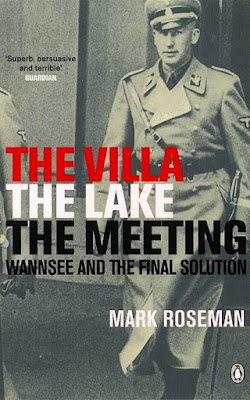 The 75th Anniversary Wannsee Conference Commemoration will be taking place in Melbourne on the 29th January 2017, chaired by the Federal Member of Parliament for Melbourne Ports and opened by the President of the Jewish Holocaust Centre.

If readers are planning to attend the Melbourne commemoration, it may be worth reading Mark Roseman’s book The Villa, the Lake, the Meeting: Wannsee and the Final Solution (Allen Lane, Penguin Press, 2002) first. Or read the review in The Guardian.

If you are going to be living/staying in Berlin in summer, Wannsee is definitely the place. Can you add a photo of the beaches and sailing to your post?

Hello Hels, Beauty and culture are supposed to breed refinement and loftiness of purpose, so it is hard to imagine these beautiful surroundings as the birthplace of such brutality and horror. Now that the area has returned to a vacation resort, I am glad that the Wannsee Conference will not be allowed to recede into oblivion.
--Jim

I went on an organised tour of Wannsee and Potsdam one (northern) summer and loved it. I had to totally change my mind about Berlin weather, sports and leisure.

Hope you recognise the photo that I added onto the post.

The residential villa areas in Wannsee seemed to become the pleasure grounds of the upper middle class... only from the late 19th century and on. It was never, for example, a medieval area. The villas, private gardens and public areas were beautifully designed, and well restored.

I cannot imagine that brutality was invented in Wannsee, but it broke my heart to see Villa Wannsee and its Reinhard Heydrichian extermination plans.

It certainly seems incongruous to think of Wannsee and the Wannsea Conference having taken place in that location. I had always imagined it to be somewhere remote like The Berghof at Berchtesgaden. There was an excellent BBC financed film called Conspiracy about the conference with Kenneth Branagh, Stanley Tucci and David Threlfal.
CLICK HERE for Bazza’s fabulous Blog ‘To Discover Ice’

I forgot to ask: In the UK 27th January is national Holocaust Memorial Day. I don't know if it's the same date in Australia or the rest of the world?

Just as you noted, the United Nations General Assembly designated 27th January each year as International Holocaust Remembrance Day (liberation of Auschwitz). Most of Europe, including Britain, accepts this date. In Poland, 19th April has been designated as the day, marking the anniversary of the Warsaw Ghetto Uprising.

In Israel Holocaust Remembrance Day is 27th of Nissan in the Jewish calendar (just before Independence Day); in 2017 it falls on 24th April.

In the USA, there seem to be a number of possible days each year, including Israel’s date - 27th of Nissan.

I wish the 2001 film Conspiracy had been shown here. But in any case, in 2001 I had not yet read Mark Roseman’s book (The Villa, the Lake, the Meeting: Wannsee and the Final Solution 2002), nor had I visited Wannsee.

The writer of the film, Loring Mandel, must have gone back to primary sources. He mentioned an old German film about the Wannsee Conference, plus the Wannsee Protocal that survived in three different versions: by Eichmann, by Müller and by Heydrich. Mandel also read the court transcripts of the Eichmann trial.

It is sad that within a beautiful building in beautiful surroundings such evil could flourish. Good luck to anyone now trying to erase history. I have a post coming up soon about a certain computer company and its WWII role in record keeping.

*nod* Your post about the computer company with a dirty history will further clarify my point - that there was no section of society, profession, church or industry that separated itself from evil. If we imagine that the main supporters of Nazism were drunken, unemployed, thuggish males, that lets wealthy industrialists, doctors, university professors, theologians and estate owners off the hook.

The commemoration, organised by the Jewish Holocaust Centre and the Jewish Community Council of Victoria, accords with the UN General Assembly 2005 resolution proclaiming 27th January as the annual international Holocaust Remembrance Day.

Testimony will be given by a Holocaust survivor at the Jewish Holocaust Centre, Melbourne.

your timing was perfect.

I'm puzzled by your characterization of the SPD as "Jewish-led"; this is essentially repeating anti-semitic propoganda of the Weimar years. Nor do I understand why you write "the 500-year old Hohenzollern dynasty of Germany", when Germany had existed as a state for less than a tenth of that time; the Hohenzollerns were Margraves of Brandenburg and eventually Kings of Prussia, but ruled Germany only from 1871.

I am so sorry... I fixed it straight away. That paragraph was a direct quote from the Museum notes and should have been in quotation marks. But since there are gross errors and anti-Semitic statements in those notes, I wonder why they are even being shown at the Museum :(

Yes, pretty scary that they're still peddling this stuff...