One of the best Edwardian railway stations - Dunedin

Surveyor Charles Kettle planned the New Zealand city of Dunedin to be an “Edin­burgh of the South”, to create beautiful views over the town centre, the hilly suburbs and the harbour. Dunedin's unique wildlife was what initially drew European settlers to the area; Otago Harbour became an international whaling and sealing port by the late 1830s.

Unlike the English settlement of the rest of New Zealand, Dunedin was founded by the Scottish Free Church in 1848. Dunedin's strong cultural links to its Scottish predecessor continue to this day. It would be interesting to know what difference the strong Scottish links have made.


As in Australia, it was the discovery of gold in Central Otago in 1861 that caused Dunedin’s population and trade to grow rapidly. In a fairly short time, the ornamented Victorian architectural heritage of Dunedin, including the large churches and public build­ings, were built with elaborate and matching ornament­at­ion. New Zealand's first Bot­anic Garden, established in 1863, created a model for public gard­ens around the country. The University of Otago, New Zealand's oldest, was set up in 1869, appropriate since Dunedin was the nation’s commercial centre. 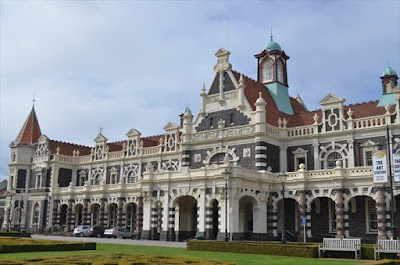 George Alexander Troup (1863-1941) had a strong connection with Scotland and his Scottish parents. He studied in Aberdeen and five years later worked with an Edinburgh engineer, surveyor and architect. He moved to New Zealand in 1883 and worked for the Survey Department in Otago before joining New Zealand Railways as a draughtsman. This was an association with railways that was to last 40 years.

In April 1888 Troup moved to Wellington to work at the head office of NZ Railways, in the archit­ectural branch. He established a programme for training engineering cadets and was involved in designing the North Island Main Trunk line. He designed the Wellington railway offices, and the Lower Hutt railway station.

His success in winning the competition for the Dunedin station, as we'll see, led to him becoming the Chief Railways Draftsman in the mid 1890s. The Minister of Railways proposed a 5 year budget to build the Railways Head Office in Wellington, and a new railway station for Dunedin. Since Dunedin Railway Station was the commercial centre of New Zealand, Troup designed a grand, Baroque-ish complex. 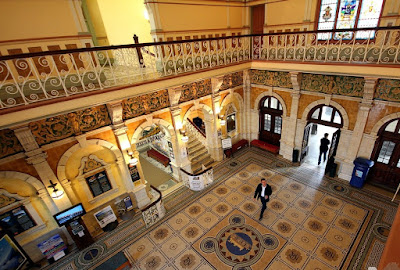 The station building consisted of a central entrance hall flanked on both sides by long wings. It was built from dark basalt from a local Otago quarry, with contrasting limestone dressings. The stone for the pillars on the Anzac Avenue facade was imported granite from Scotland.

The new railway station was controversially planned on land that the local Harb­our Board feared would block access to the wharves. So a Royal Commission was established to determine the best site and it ruled in favour of the current location in Anzac Avenue. But the trickiest element turned out to be the reclaimed land. When building began, 600 piles had to be driven into the bedrock to support the weight of the structure. Decades later, the lobby floor had sunk and a new base was needed. Never mind - the station remained a significant part of the townscape for many years.


Note the key design elements chosen for the railway station: 1] domed Italianate tower located at the S-W corner of the station; 2] the Gothic spire at the other end; 3] foyer with stained glass windows depicting loco­motives; 4] frieze of Doulton cherubs and foliage that ran below the balcony; 5] booking hall and mosaic floor of 750,000 tiles of Royal Doulton porcelain and 6] ticketboxes, set within tiled arches. 7] Troup’s original gates, are still part of the surrounding fence that has elaborate wrought iron railings. 8] The one kilometre main platform is the country's longest and 9] The roof was tiled in terracotta shingles and Marseilles tiles, topped by copper-domed cupolas. 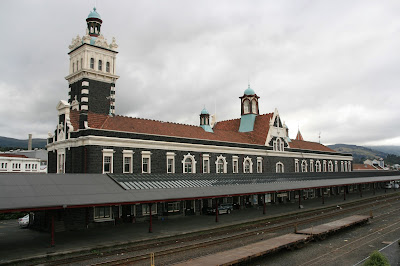 It was constructed during a period of growth for the New Zealand rail system, the boom period that occurred in the 1895-1905 era. At first, up to 100 trains a day used the station. The main concourse was very impressive, and busy! But eventually the economic decline of rail transport hit New Zealand. During the 1980s, many government departments were reduced, including the railways. As a result, New Zealand Rail began to sell many of its buildings. Dun­edin’s station was sold to the City Council, and a major renovation programme was started to bring it back to its former glory.


Today tourists can now enjoy all the restaurants downstairs, and the Sports Hall of Fame and the Cleveland Living Arts Centre upstairs. The station remains a major tourist attraction. Weekly Saturday farmers markets are held in Anzac Square outside the station. Visitors can stroll around the well kept gardens. And once a year there are the Dunedin Fashion Shows, using the world's longest catwalk (the platform). 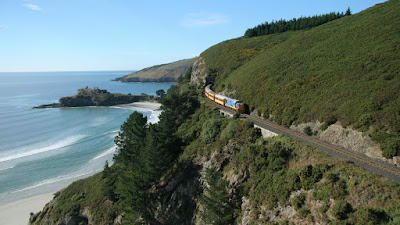 Dunedin Railway Station 1906 was definitely the outstanding monument of Edward­ian architecture in New Zealand. So whether or not everyone loved the mixed Gothic-Baroque taste, Troup was deservedly knighted in 1937. And he rightly received a Royal Institute of British Architects Award for the building that became the major hub of the South Island railway network.

Thank you to Waymarks for the architectural information  and to The History of NZ for the city’s history.

Hard to believe we missed seeing the railway station in the early 80s. The weather for our visit was very bad.

I had never heard of Troup, before visiting Dunedin. He did well...quickly.

That building is quite exquisite. I'm pleased they have restored it and that it is popular now. I'd love the take the seaside train rides.

Hello Hels, What a magnificent building, and many kudos to them for the fine restoration. Its high ceilings and many large openings give it an airiness not always found in such an ornate building.
--Jim

every time we visit a new place, choices have to be made about what to see in the time available. The number of times I have missed something interesting is legendary, either because no-one had ever mentioned the facility, or it was closed on the only day I had available, or it was closed for renovations etc.

Anyhow it is a great excuse to visit again in the future :)

Troup (b1863) must have been the most ambitious and mobile man in Scotland. And in 1888 in New Zealand, his ambitiousness continued. By the mid 1890s he became the Chief Railways Draughtsman in his part of NZ and got the job to build a new railway station for Dunedin. Etc etc.

He seemed to be an unstoppable force.

when you travel to Australia, allow yourself plenty of time to visit New Zealand as well.
The cities are fun to visit, but so are the sublime country areas and coast lines. The scenic coastal tourist trains are very special.

I briefly raised an issue that had been mentioned more in the popular press at the time than in the architectural papers - that not everyone loved it! NZ.com said "Gingerbread George" Troup used an experimental collaboration of Classical and Neo-Gothic imagery, which created a classically regimented structure, with an asymmetric countenance. It was an unrestrained freedom of expression most prominently in the Italianate clock tower at one end and the Gothic spire at the other, as well as the use of Classical motifs to create upwards gestures reminiscent of Gothic architecture.

Although the Classical-NeoGothic style may have been past its used-time in 1906, I too am very glad the recent renovation worked hard to preserve Troup's original designs.

I walked the full length of the platform and needed to have a rest with a nice, hot cuppa at the end. I have never seen the fashion parades, but it shows how flexible and useful Dunedin's business can be with 1906 architecture.

Not only is the platform long and dramatic, the station itself is located next to a great space. Just outside the station is Anzac Square and garden! On the other side of the square is Lower Stuart St, which leads to Dunedin's city centre - The Octagon.

Thanks you Hels for highlighting this exquisite building, it really is a treasure. And thankfully it's still a 'living' building and there's ALWAYS tourists hovering around taking photos. I've always been surprised that the sunken mosaic floor in the foyer was faithfully replaced in the 1960's(?), even then it must have cost the New Zealand Railways a fortune.

Oops ..you have some wonderful posts about, and photos of Dunedin, Christchurch, the Eastern Railways etc ...I wish I had had a good look before writing my post.

Re the extraordinary costs, I keep going back to the importance of Dunedin's late 19th century gold discoveries, trade, population growth and architecture. To a non-New Zealanders, these successes were probably a surprise. But to locals back then, the more money spent on Dunedin, the better.