Stratford on Avon’s half-timbered Guildhall was completed in 1420; thus the new Visitor Centre, which opened in April 2016, celebrates nearly 600 years of service. Following a £1.8 million restoration funded by National Lottery, Shakespeare’s Schoolroom and Guildhall opened just in time for the bard's 400th anniversary commemorations.  The vast amount of project money went on preservation of the medieval timber structure and paintings, and modernisation of the heating and sanitary facilities etc.

The town's C15th Guildhall became host to a schoolroom which moved into the upper floor of the building in the mid-1560s. Because it is normally difficult to track the earliest years of any historical figure, even those who later became famous national and international icons, Shakespeare's Schoolroom and Guild­hall has been vital.

Young William Shakespeare (c1564–1616) was a pupil at the Guildhall's grammar school from 1571 until 1578. It could not have been easy. School for the young lads started at 6 AM and finished at 5 PM, at least during the summer months. The school week was long and the canings were nasty.

In common with almost all grammar schools created before and after King Edward VI (reigned 1547-53, just before Shake­speare went to school), the attendance records have long disappeared. But it is evident from Shakespeare’s plays that his knowledge of classical writers and of schoolmasters was significant, presumably gained at his local grammar school. Thus the missing childhood segment of the bard's early life in Stratford has been nicely fleshed out. 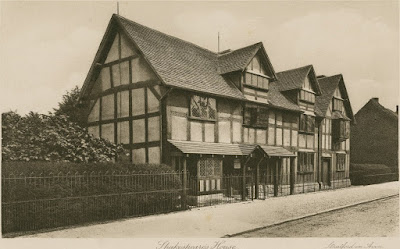 What subjects did young William study at school?  He would have studied Latin as preparation for any future career in the Church or public administration; Latin was the language of communication among Europe’s educated classes back then. In Shakespeare’s case, it is most likely that his interest in Latin was sparked by the great writers in Latin such as Ovid and Virgil, who he repeatedly cited in his works. Apparently the Latin playwrights Terence and Plautus, whose work was routinely performed in grammar schools, were studied as literature.

The modern visitor can now see how and where William spent his school years. Located in the centre of his town, visitors following The Shakespeare Trail from his place of birth can easily walk to the place of his education (King Edward VI School) and then to Holy Trinity Church where he was baptised and where the family worshipped. I am assuming readers remember the details of their primary school very well – the timber beams may not remind us of South Melbourne Primary or Bondi Primary c1955, but the rows of pupils’ desks and the teacher’s seat in front of the classroom certainly will. 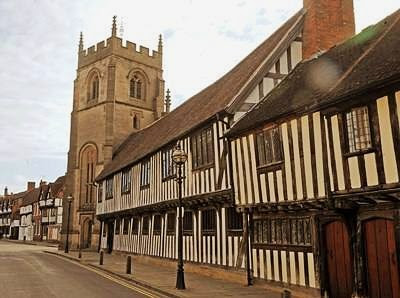 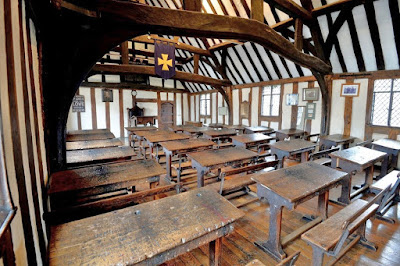 I am very aware that there are few surviving examples of late medieval provincials guildhalls in Britain. Thus it is quite a thrill that this 1420 Guildhall has once again become one of the most atmospheric buildings in the entire country. People interested in medieval architecture will want to carefully inspect the building.

But there are more factors to be considered. Catholic Queen Mary ruled England from 1553-1558 and John Shakespeare and Mary Arden Shakespeare married in 1557. It makes sense that by the time young William was born in Queen Elizabeth's Protestant reign, Shakespeare’s family were probably still secret Catholics i.e recusants who refused to conform to the new state religion. One of Shakespeare’s maternal cousins was executed for hiding a Catholic priest and William’s father was fined for refusing to attend Church of England services.. Surely the family's old religion must have influenced young William's education.

Furthermore William’s father John Shakespeare was very involved as an alderman in council politics and the guildhall was therefore a significant building for the family.  Even if visitors are not fascinated by Strat­ford’s Borough Council and its part in the civic history of the town, they will certainly be fascinated by the Guildhall’s law-court. And the guildhall had another use – small amateur theatrical product­ions. Since the travelling troops of professional actors visited Stratford on Avon only once a year, Stratford’s guildhall stage was almost certainly young William’s first chance for theatrical experiences.

William Shakespeare’s last will and testament was written in March 1616 in Stratford by local solicitor Francis Collins. Shakespeare died a wealthy man and left the bulk of his estate to his elder daughter, Susannah Hall. He left £300 to his younger daughter, Judith and gave his wife, Anne Hathaway, his second-best bed. Beds and other pieces of household furniture were often the sole bequest to a wife. The will included three of Shakespeare’s six known signatures.

Normally cared for by The National Archives, the will has been loaned to the Treasures Celebrating 400 years of Shakespeare’s Legacy Exhibition at Shakespeare’s Birthplace, Stratford-upon-Avon until 4th August 2016. This is the first time Shakespeare’s will is returning to the town since Dr John Hall, Shakespeare’s son-in-law, took it to London in June 1616 to get a grant of probate. It is hoped that displaying this historic document alongside other treas­ures from the collection will complete the story of Shakespeare’s relationships with family, friends and business associates.

Hello Hels, It is amazing that so much survives that touched on Shakespeare's life, even in a country that doesn't automatically discard everything that is old. I have a Victorian photo album of the sights of Stratford-upon-Avon; I'll have to take a look to see whether the Guildhall is included.
--Jim

Would it be correct to assume that these buildings are preserved because of the Shakespeare connection?
Shakespeare does not have a lot of religious references in his work; maybe that's just diplomacy! He was certainly diplomatic in writing Macbeth to impress James VI & I who was interested in witchcraft.
CLICK HERE for Bazza’s fabulous Blog ‘To Discover Ice’

If William's parents had been reluctant/involuntary converts to Protestantism, might that have affected the young lad's childhood and even his writing career?

by the time an adult has become a giant in the world of literature (or any other area of human endeavour), we know everything about his life as an adult including marriage, work, income, politics, travel etc etc. But all the events of his formative years, even the very important ones, tend to remain invisible to history.

In your Victorian photo album about Stratford, you just might pick up some valuable lost clues.

in a luxury industry like literature (publications) and drama presentations, a man would be shooting himself in the foot if he persisted with visions of his own society that were unacceptable at the time. Your example about witchcraft was spot on! Most people would have thought to themselves that King James I was so besotted with hunting down witchcraft and killing women, it addled his royal brain and dominated the first Stewart reign.

There was one way around it, I suppose. Shakespeare could set obnoxious behaviour overseas.

I think the religious changes, back and forth between Catholicism and Protestantism depending on who was sitting on the throne, must have been devastating for families who lived from Henry VIII to Elizabeth I's reigns. Shakespeare's parents would have been very sensible not to draw attention to their deeply felt religious beliefs. But in any case, if William adored his parents, he most certainly would have felt their pain.

Imagine the fallout from the Gunpowder Plot of 1605, when a few Catholic conspirators attempted to blow up Parliament. His father John Shakespeare, a Stratford town councillor, would have kept his head right down!!

Even Queen Elizabeth, a figure normally seen as relatively tolerant, had tens of thousands of people killed for remaining loyal to their old faith. Any Catholic priest who wanted to provide comfort to his flock, had to have a bolt-hold equipped with water and a blanket during "round ups".

One last thought. Is it true that London's South Bank, where Shakespeare's Globe Theatre was found, was some sort of centre for underground Catholic life?