Endre Friedmann (1913–1954) was born in Budapest to a cultivated Jewish family. Educated in his own country, Friedmann spoke flawless Hungarian and German, less flawless French and imperfect, heavily accented English. Deciding that there was little future in inter-war Hungary, he left home as soon as he could. Friedmann originally wanted to be a writer; however, he found work in photography in Berlin and grew to love the art. In 1933 he moved from Germany to France because of the rise of Nazism, but struggled to find work there.

Many thanks to Fox Green and to Vanity Fair for telling the story. Friedmann's first public photographs appeared in 1932. In 1934 the very elegant young man met Gerda Pohorylle, a German Jewish refugee. The couple lived in Paris where he taught Gerda photography. Together they designed new names for themselves: Robert Capa for him (to be similar to film director Frank Capra) and Gerda Taro for her. They travelled together to Spain in 1936 to document the Spanish Civil War, just at the right time for Capa to become close friends with Ernest Hemingway and Pablo Picasso. Despite, or perhaps because of Gerda’s horrible death in 1937, Capa kept himself busy taking photos in Spain until 1939. 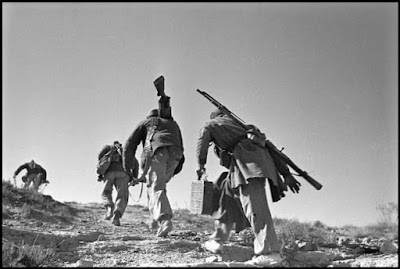 At the start of WW2 in 1939, Capa moved to New York, a safe haven in the time of Nazi persecution. He first photographed WW2 for Collier's Weekly, and for Life Magazine, the only enemy alien photographer for the Allies. In Italy, he produced eight pictorial volumes and distinguished himself in a particular war zone. But Life withheld a long-term contract, despite his growing fame.

In June 1944 (D-Day) Capa actually swam ashore with the second wave of Allied troops. Equipped with two cameras, lenses and spare film, Capa took 106 pictures in the first couple of hours of the invasion. However a staff member at Life in London accidentally melted the emulsion in the negatives in three complete rolls and over half of a fourth roll. Grabbing the prints of the surviving 11 images, the staffer placed them in water-resistant envelopes, one set for Life’s London office, one for the British government and one for the Pentagon. These 11 gritty frames became the sole collective vision of WW2’s Longest Day. Luckily Life magaz­ine did print 10 of the images in its June 1944 issue. 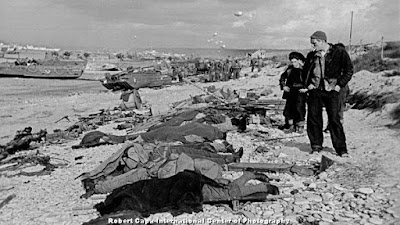 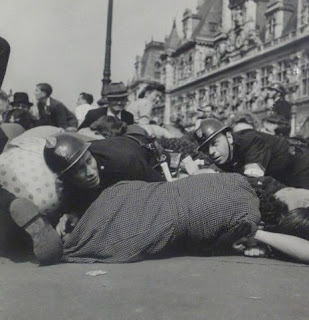 Surprisingly for a Jewish Hungarian, Capa did not have any interest in photographing the concentration camps after liberation, presumably because every Russian and British photographer was already there.

The never-married Capa became the lover of actress Ingrid Bergman, who was at the time putting on shows for Amer­ic­an soldiers in Europe. In Dec 1945, Capa followed her to Hollywood, where he worked briefly for American Inter­national Pictures. Bergman tried to persuade him to marry her, but in 1946 he left the USA. Did he not like to be pinned down in one city? Was he such a huge risk-taker that marriage would be totally unfair to any woman? Perhaps it had became clear to Capa that he could not flourish without the adrenaline of war.

In 1947 Capa travelled into the Soviet Union with his friend, writer John Steinbeck, photographing the ruins of Stalingrad. Steinbeck’s A Russian Journal was illustrated in 1948 with Capa's photos.

Also in 1947, Capa conceived of the idea of a cooperative agency for worldwide freelance photographers and Milanese photojournalist Maria Eisner brought the members together and ran the Paris office. Thus the cooperative called Magnum Photos arrived, with Rita Vandivert as the first leader, and head of the New York office.

Capa toured Israel a number of times after the establishment of the state in May 1948. One week after Ben Gurion made his historic proclamation, Capa landed in Tel Aviv on assignment for the British weekly Illustrated. His photographs of the Israeli War of Independence recalled his tragic pictures of the Spanish Civil War. But his images of Holocaust survivers migrating to Israel were full of hope. Capa supplied many fine photographs for Irwin Shaw’s and Capas’ book, Report on Israel (1950), presumably because he identified so closely with the Jews in their old/new homeland. 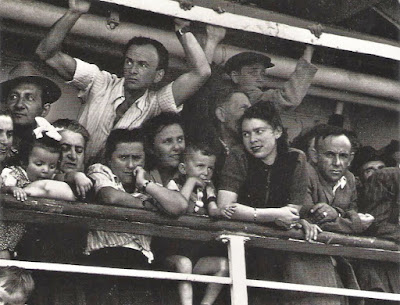 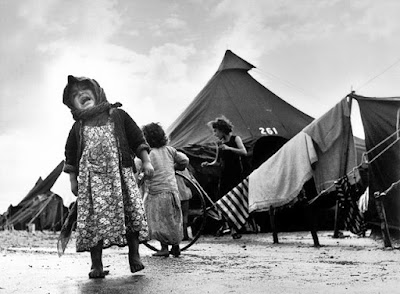 While in Japan in the early 1950s, Life magazine asked him to go on assignment to Southeast Asia, where the French had been fighting for eight years in the First Indochina War. Capa accepted and accompanied a French regiment with two other Time-Life journalists. In May 1954, the regiment was passing through a dangerous area in Vietnam when Capa leapt into the open road to take photos. He stepped on a landmine and died with his camera still in his hand. On that very night John Steinbeck, Irwin Shaw and Capa’s other friends held a memorial wake in Capa's favourite bistro in Paris. He was buried in New York, aged only 41. 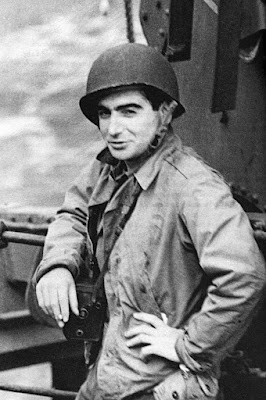 Robert Capa had been only an adolescent when he left home in the 1930s. Yet from the trenches, this stateless soul became a war photo-journalist who covered five different wars: Spanish Civil War, Second Sino-Japanese War, WW2, 1948’s Arab-Israeli War and the First Indochina War.

Even Capa’s photographs of the Spanish Civil War, which had been presumed lost during the Nazi invasion of Paris, were eventually located in 1995. As it turned out, they had been saved by his darkroom manager, Hungarian photographer Imre Weisz, and emerged in Mexico City!

In Dec 2007 Robert Capa’s estate was moved to his brother Cornell’s Centre. And a couple of years later, the same International Centre of Photography organised a travelling exhibition titled This Is War: Robert Capa at Work. Robert Capa's amazing photojournalism from the 1930s and 1940s went on display at Barbican Art Gallery London, International Centre of Photography Milan, Museu Nacional d'Art de Catalunya and Nederlands Fotomuseum.

My parents had Shaw's book Report on Israel. I cannot remember the text at all and I did not know Capa's name. What stands out from my young mind are the photos of survivors squashed onto migrant ships. They broke my parents heart.

there are many fine Capa photos from Israel during the 1948-50 years, so I have added one to the post - a refugee-immigrant ship arriving in Haifa in 1949. I think refugees to every country in the world could identify with that moment.

Was Capa a clever historian or a lunatic risk taker?

Both. His photographic records of Spanish Civil War, WW2 and the Arab-Israeli War in particular are vital to our understanding of those (now remote) conflicts. Ditto Cornell Capa's vital protection of his brother's legacy with the International Centre of Photography in New York.

But he took such stupid risks with his life that he caused endless pain to his parents, family, friends and potential wives. And brought his valuable career to a horrible and early end.

I wonder did he take any photographs of the Palestinians who were leaving Israel at the same time?

not sure. I only examined the photos that were available for public usage. If you examine the collection at the International Centre of Photography in New York, I would love to know what you find.