I have written often about the Bloomsbury Group, whether it was about Virginia Woolf’s rural idyll, Vanessa Bell’s art, Roger Fry’s modernist exhibitions or Quentin Bell in the Spanish Civil War. Quite separately I have written about soldier poets of the Somme during WW1.

The two groups of people had two important elements in common. They all lived in London or the South Eastern counties. And they were all born between 1879-1895:

But the Bloomsbury men seemed to have met each other at Cambridge University while the poets tended to be from Oxford. So it did not occur to me to ask if the two groups of creative, intellectual types knew each other and even socialised together. 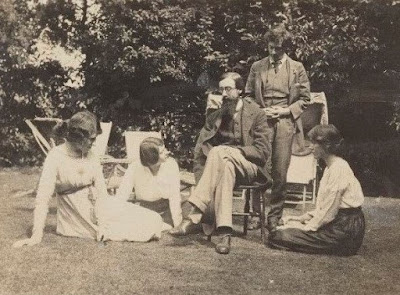 I was reading Frank Prochaska’s history of Somerville College for women at Oxford during WW1. The War Office had requisitioned Somerville as a military hospital as early as April 1915 and the female students were moved instead to Oriel College. Quite accid­entally I found links between injured soldier poets brought back from the Front, female undergraduates at Oxford who could fulfil their intellectual ambitions, and support from some of the Bloomsbury Set.

Two of the great poets of the war, Siefgried Sassoon and Robert Graves spent time recovering from injuries in Somerville College hospital. During his time there in August 1916, Sassoon wrote his Somerville poems, including The Stretcher-Case, The Father, The Hero and The One Legged Man. When he was fit enough to walk into the town, Sassoon called on the society hostess and socialite Lady Ottoline Morrell at Garsington Manor Oxford.

Even before the war, Lady Ottoline had been sharing the Bloomsburies' Thursday evenings in Fitzroy Square where she met Lytton Strachey and the other regulars. So important was she to the Bloomsbury Set that Roger Fry’s second Post Impressionist exhibition in 1912 was patronised (and financially backed?) by Ottoline, with whom Fry had a fling.

Ottoline was herself a pacifist during the war. This had two implications for today’s post. Firstly she found jobs on her estate so that conscientious objectors from the Bloomsbury Group like Duncan Grant could gain court exemption from serving in the army. Secondly it may have been her politics that attracted Sassoon to her home. Sassoon, who wanted to make a stand against the immorality of total war, found himself amongst like-minded people such as Bertrand Russell. It was Russell who encouraged Sassoon to write his Soldier’s Declaration.

Siegfried Sassoon soon met several other members of the Bloomsbury Group, including E M Forster, John Maynard Keynes, Lytton Strachey and the critic Desmond McCarthy. These friendships, started in the misery of war, lasted for many years afterwards.

Later, when Robert Graves was being treated for shell shock in Somerville Hospital in 1917, he too often visited the Morrells at Garsington. It was in their home that Graves met Aldous Huxley, Lytton Strachey and Bertrand Russell, all frequent guests of the generous hosts. 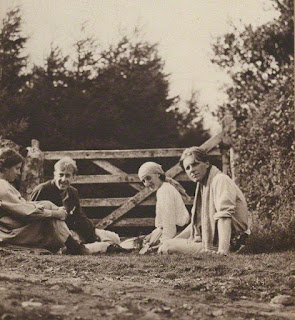 Friends and Apostles: Correspondence of Rupert Brooke and James Strachey 1905-1914 and the blog The Siegfried Sassoon Fellowship tell more stories of the connections between the Bloomsbury Group and the War Poets. David Garnett and Rupert Brooke went for a holiday in the Norfolk Broads and shared a cabin in 1911. From then on, their friendship remained very intense and mutually rewarding.

Rupert Brooke was also well-acquainted with Virginia Woolf, so much so that he once invited her to go skinny-dipping with him. Brooke, despite or because of  his angelic appearance, had relationships with many women and some men before his untimely death. Like most of the writers who met and socialised with the Bloomsbury Group, he also had a nice line in satire. So Sassoon wrote a poem that attempted to emulate Brooke’s satirical style.

Armistice Day ended WW1 on the 11th November 1918. Each year on this day Australians observe one minute’s silence at 11 am, in memory of those who died.

What happened to Isaac Rosenberg? He seemed to be a pacifist, like some of the others in or near the Bloomsbury circle.

Hels, like Lady Ottoline, will you one day be the wealthy patron of the rebellious yet talented and artistic? I'd like to be invited to your salon when your beholden worshippers are in attendance, but just as an observer though, not as a participant.

Isaac Rosenberg did not know any of the Bloomsbury Set as far as I know. But he was very close friends with every artist who later became famous in the East End of London - David Bomberg, Mark Gertler, Stanley Spencer, CRW Nevinson etc.

Rosenberg was too short, too sickly and a bit old to be called up, so why did he go into the army and die so tragically in some trench in 1918? What a tragedy :(

Your timing is perfect! This week I have been lecturing on the female salonieres of Belle Époque France, like Gertrude Stein and Misia Sert. Once a week they invited clever, witty and creative guests into their home where they kept up to date with the most trendy literature, music or art. It was the only space in which well connected women could influence the cultural world, and patronise young artists.

My favourite was Genevieve Halevy, daughter of a musical genius, wife of Georges Bizet and patron of Marcel Proust.

What did Robert Graves think of Aldous Huxley, Lytton Strachey and Bertrand Russell? They may have become intellectual brothers and colleagues.

I looked to the book The Early Poetry of Robert Graves by Kersnowski for a possible answer. He repeated that Graves often visited Ottoline and Philip Morrell at their Oxford house and met all their friends. But some trouble arose between the pacifists on one side and those who fought in France on the other. Bertrand Russell was perhaps the least understanding of Graves and Sassoon.

Look what was in the Weekend Australian, The Great War Part II today. "Christina Spittel is a lecturer in English as the University of NSW and is writing a book on the treatment of the war in Australian fiction. She points out that Owen remained little known for many years after his death. Only decades later was he raised from literary obscurity, by which time the poets who were prominent during the war years were almost entirely forgotten". And "then there was Brooke, who had published a collection of poetry by the time he voluntarily took up a naval commission soon after the war began. He had mixed with the Bloomsbury group and was known in literary circles".

I'd have thought they were best known when the war was uppermost in peoples' thinking, during and in the years after the war ended.

I think the widows, orphans and close friends of the millions of dead and wounded men found life unbearable in the post-war years. Just going on a train with a blind or legless ex-soldier would have been difficult. So it makes sense that people might not have flocked to the bookshops straight away to buy Wilfred Owen's war poetry.

Yet it was while recovering at the hospital in Edinburgh in 1917 that Owen met Siegfried Sassoon, an older soldier whose poetry was already well known. Sassoon admired Owen's poetry and introduced him to Robert Graves and others in his cultured circle. So it made sense to me that when Owen died in Nov 1918, Sassoon would take the responsibility of getting Owen's poems published as soon as possible - The Poems of Wilfred Owen (1919).

The woman in the second photo is NOT Lady Ottoline Morrell. There is no resemblance & Ottoline never wore short dresses.

I have deleted the second photo. But I would love you to tell me who you think the sitters were and on what date the photo was taken.