For my Baby Boomer generation, born after our fathers were demobilised in late 1945, the Beatles story was an open book. I personally knew every word of every Beatle song, every harmony, every wife and girlfriend.

Yet the ABC produced a television programme in Australia called When The Beatles Drove Us Wild (2015) that tells a new story. Never-revealed footage of the Beatles’ 13 days in Australia and New Zealand in 1964 showed their 20 concerts, their after-concert sex lives and a new Beatle. The film proposed that this tour single-handedly changed Australia’s clothes, hair dos, music, parent-teenage relationships and our concept of public mass demonstrations.

But a new Beatle?? I remember that year with crystal clarity, but I had never heard of a new Beatle.

In June 1964, excitement about Beatle music was heating up as the band prepared for its first tour to Denmark, Netherlands, Hong Kong, Australia and New Zealand. But the day before the Beatles were to leave, Ringo Starr was suddenly hospitalised with tonsillitis. With hotels and concert halls booked and thousands of tickets sold, manager Brian Epstein realised that cancelling the tour would have created a huge financial loss.

They rushed to find a replacement for Starr. John Lennon and Paul McCartney accepted that hiring a replacement drummer was nec­essary to ensure the tour went ahead, but George Harrison wanted to remain loyal to Ringo. Epstein had to urgently find a good drummer who could successfully play with the biggest group in the world. 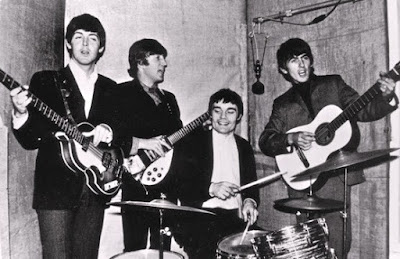 Jimmy Nicol, a London drummer born in 1939, was that man. Ep­st­ein and McCartney already knew him and hired him after just one aud­ition. Nicol was given a moptop haircut, Ringo Starr’s own suit and a tick­et for the flight to Denmark the next day. Iron­ically Starr was feeling terrible about Nicol replacing him, just as Starr had replaced Pete Best as the Beatles’ drummer two years earlier.

Eventually Ringo Starr recovered and rejoined the Beatles in Melbourne, where he performed for the first time on the 14th of June. The next day Nicol did his final tele­vision interview as a Beatle. Despite having been mobbed by a quarter of a million fans in Melbourne a day earlier, Nicol sat tot­ally alone in the airport on his way home. The footage of a lonely, depressed man was heartbreaking.

Perhaps he was comforted by a handsome cheque and a gift inscribed “From the Beatles and Brian Ep­stein to Jimmy – with appreciation and gratitude.” Probably not; for Jimmy Nicol, it was over :(

On 21st June 1964, The Beatles touched down in New Zealand. Keith Holyoake was Prime Minister, the pubs all closed at 6 o’clock and TV was still in black and white. Recent touring performers of note had been The Vienna Boys Choir, pianist Arthur Rubenstein and Vera Lynn.

Endless thousands of fans turned up at the airport and soon the group make their famous appearance of the balcony of the St George Hotel. New Zealand Beatlemania was insane.. and everywhere!! Clearly the Beatles' twelve shows in four major cities over seven days had a seismic cultural impact on this previously conservative nation. Alas Jimmy Nicol knew nothing of screaming New Zealand teenagers. 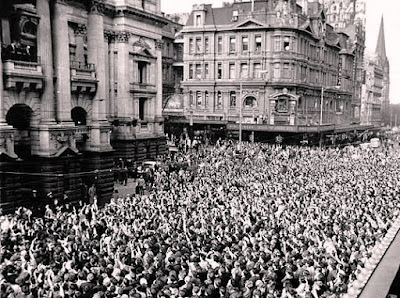 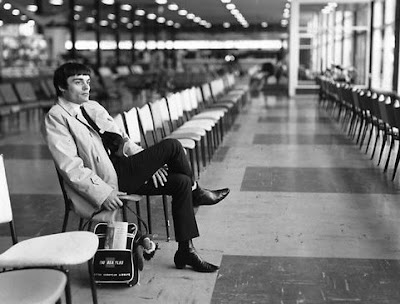 Very early on his second morning in Melbourne
Jimmy Nicol was at the airport alone, going home to the UK.

One book on the subject, The Beatle Who Vanished, was written by Jim Berkenstadt and published by Rock And Roll Detective Publishing in 2013. Nicol’s life apparently spiralled out of control after he left Melbourne. Nicol had two solo bands in the immediate post-Beatle era but they did not sell any records, despite some radio and TV appearances. Alas he had spent all his money on these bands. Less than a year later he was declared bankrupt with large debts, his wife divorced him, he became estranged from his son Howie and he was living in poverty.

This sad part of the Nichol story is well covered in The Rock and Roll Chemist blog. The author showed how limited the influence that Nichol had on the Beatles was: mainly their 1967 song "Getting Better"

When the Swedish group Spotnicks offered him concert work in 1965, Nicol was unemployed and accepted the group’s offer gratefully. The Spotnicks toured with him around the world and made him a full member of the band, but he apparently developed a drug problem and vanished again.

I can find little trace of Nicol for the next 20 years, until he agreed to participate in a Beatles event in Amsterdam in 1984 and was interviewed by the promoter. At that Amsterdam event, Jimmy was still saying that being a Beatle back in June 1964 had been both a curse and a blessing.

Fin­ally the music world believed (wrongly) that he had died in 1988. In 2004 The Weekend Australian newspaper located Nicol in a flat in a north London industrial estate, where he was living as a virtual recluse.

Gee, that is a sad story. I wonder if his life might have been better had he not become a Beatle all those years ago. Maybe he in his lonely moments wonders that too.

Best year in my life!! Dad wouldn't let me go to the City to welcome the Beatniks because he was afraid I would get pregnant in the streets ha ha. I do not remember Jimmy at all.

this calls to mind the idea of everyone having 15 minutes of fame in their life i.e a short-lived period of media publicity and celebrity. So, yes, anyone can become famous for a very short period of time, but they soon slip back into obscurity. And noone slipped back into obscurity quite as comprehensively as Jimmy Nicol.

before this post was published, I asked 25 women who were old enough in 1964 whether a] they went into town to greet the Beatles and b] they remembered Jimmy Nicol. All of them either wagged school and went into town, or they watched the Melbourne welcome on tv. And not a single soul remembered the name Jimmy Nicol.

Well, she was just seventeen,
And you know what I mean,
And the way she looked was way beyond compare.
So how could I dance with another
And I saw her standing there.

Well she looked at me, and I, I could see
That before too long I'd fall in love with her.
She wouldn't dance with another
Since I saw her standin' there.

What were the dates of the Sydney performances? I can't remember millions of kids in the streets in Sydney, as happened in Melbourne and Adelaide. Perhaps we Sydneysiders were already cool :)

There were six concerts in Sydney, 18th, 19th and 20th June 1964. The Sydney Morning Herald recorded the same frantic welcomes that Adelaide and Melbourne had shown. Huge crowds greeted the lads at the airport, crowds waited outside their Chevron Hotel, and crowds filled the stadium, screaming for the idols.

After one Sydney concert, a party was held back at the Chevron. Also present were 17 girls who had won the Daily Mirror newspaper's "Why I would like to be a guest at a Beatle's birthday party" competition. According to the documentary When The Beatles Drove Us Wild, there was quite a lot of sex and booze going on.

Interesting story, I remember when The Beatles toured here I was 14 at the time and not allowed to go to the concert but I remembered him, I liked him better than Ringo.
Merle.............

And good on you for remembering Jimmy in enough detail to prefer one drummer over another.

Do you remember the little 45 RPM records we used to buy?

Someone in my year at high school was in a band but left to pursue uni studies (parental pressure probably played a part).
The band went on to become internationally famous. I don't think he ever recovered from the thought of what might have been. Fame can be a terrible thing.

Nod... understood. That would have been sooo cool, had it happened. Fame can be a terrible thing, but so can JUST missing out on fame. So close, you can taste it!

I had a friend who was in the same year at school as Mama Cass. So close were they, Mama Cass took my friend's name and made it famous!

I had another friend who managed one of Australia's most famous rock bands EVER. Decades later, he is in the newspapers for all the wrong reasons :(

My girlfriend and I missed school that day. You can see us screaming at the bottom of your photo!

if your mother didn't know where you were in 1964, I wouldn't be showing her the photo now :)

I was going to say that in this case, you are 100% correct. But I think you are always correct regarding music :) And architecture, paintings etc etc

were you a huge Beatles fan back in the day?

Hundreds of images chronicling The Beatles' rise to fame were collected by Photobox in January 2019 and published in a coffee table book. An accompanying photographic exhibition to showcase a selection of the best images was launched at The Beatles Story Museum in Liverpool in May.

I am delighted to see some New Zealand and Australian photos in that collection.