Sonia Terk (1885-1979) was born north of Odessa in Southern Russia in 1885. But then she moved to St Petersburg; there she was cared for by her mother's brother, the lawyer Henri Terk, for the years of her primary and secondary schooling. And she was formally adopted by the Terks, assuming their surname and enjoying a privileged upbringing with her adoptive parents.

She became a student at the Karlsruhe Art Academy in Germany (1903-4), then went on to Paris in 1906 to join the emerging avant-garde. During her first year in Paris she met, and in 1908 married, German art gallery owner Wilhelm Uhde. Since Uhde was gay, I am assuming it was a marriage of convenience to escape the family’s demands for her to return home to Russia. Nonetheless Sonia certainly gained entrance into the art world via exhibitions at Uhde's gallery.

Eventually the hub of artistic creativity moved across Paris from Montmartre to Montparnasse. Many of the newly arrived artists lived in La Ruche, a very cheap art­is­ts’ colony in the Montparnasse district. Most of them were from Eastern Europe and most of them were Jewish, so in the early years they kept homesickness and poverty at bay by socialising in Yiddish.

Sonia Delaunay was also Russian, Jewish and a Yiddish speaker, but she had one great advantage. Her wealthy family in Russia sent her money and food parcels every month, while the other young artists continued to live in dire poverty. The highlight of their week was when Sonia Delaunay arrived at La Ruche with food gifts (bottles of Russian herring and pickled cucumbers). 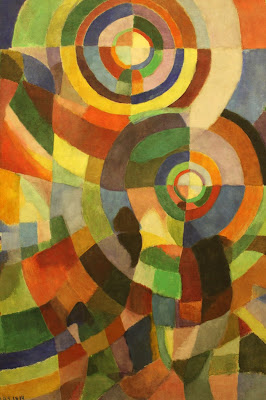 Husband Robert learned Cubism from Picasso, Braque, Gris and Léger. And by the time war started in 1914, he had distilled his art into a more abstract­ Cubism, where strong colours run into one another. Sonia concentrated more on the development of Orphism, a movement definitely based in Cubism but more lyrical and colourful than the rather severe Picasso and Braque taste. Just as war was starting, Sonia made for herself a dress of bright patchwork colours. When the couple show­ed at the Der Sturm gallery in Berlin, Sonia’s mixing of the decorative arts with painting confused her rather traditionalist critics.

But the time was right for fashion media. Fashion illustration and promotional graphics were changing, and commercial image-making was becoming a legitimate art form. Sonia was thrilled to join artists like Leon Bakst, Erté and Pablo Picasso in using their skills on clothes, textiles and stage costumes.


The couple spent WW1 in Spain and Portugal where Sonia became profession­ally involved in theatre, films and dance, and again in women’s fashion. And in 1918 she opened the Casa Sonia, a Madrid shop specialising in her own fashions and interior designs. Just as well! The monthly money from St Petersburg dried up during the Russian Revolution.

When the couple returned to Paris in 1921, Sonia set up a work shop in their flat. Covering the walls, furniture and furnishings with her colourful designs, she turned her home into a collage, modelling her design ideas in three dimensions. Sonia was very busy in the early 1920s, focusing on painting, tapestry, textiles and mosaics.

Did the young Russian lass ever think she would bring a new taste into the Parisian world of high fashion, creating textiles that would look like artists’ canvases? Her colourful abstract designs must have been appealing - Diaghilev’s Ballets Russes commissioned their stage costumes from her and even Liberty of London, hardly a bastion of radicalism, wanted her products.

In fact her textiles were so popular that she opened her shop, Atelier Simultané, in Paris. And my favourite moment in Sonia’s history was when she was invited to build and fill a pavilion at Paris’ Exposition Internationale des Arts Décoratifs et Industriels Modernes in 1925. This world fair, particularly her Simultaneous fashion models walking around the fairgrounds, was the launching pad for Art Deco for the rest of the world and an international launching pad for Sonia Delaunay as well.

Joyous colour was at the heart of Sonia’s world, in all her paintings, designs, posters, textiles, book binding and book illustrations. Her trademark concentric circ­les, fractured squares and misaligned rectangles and blocks were suffused with every imaginable hue, the bolder and brighter the better. Delaunay dedicated her life to experimenting with colour and abstraction, on the canvas and everywhere else.

In the 1930s she returned to a renewed focus on paint­ing, joining the Abstraction-Creation group in seeking to create an art based upon non-representational elements, geometrical and foc­used on colour as central to painting. The group was spread around Europe, and including among its members Jean/Hans Arp, Jean Helion, Barbara Hepworth, Wassily Kandinsky, El Lissitsky, Piet Mondrian.

Sonia became the first living female artist to be given a retros­pective at the Louvre in 1964. But it is just in the last couple of years that there has been a sudden surge in interest in her career. 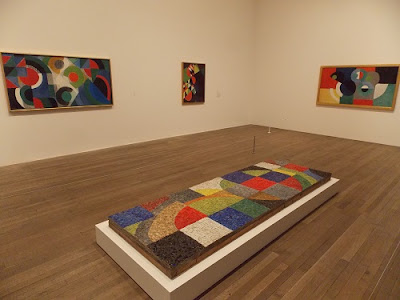 In 2011 the programme called Colour Moves: Art and Fashion by Sonia Delaunay, was presented at the Cooper-Hewitt National Design Museum in New York. The best section showed 90 lively gouache studies and their equally vibrant commercial results: hand-printed silks, velvets and cottons, represented by 120 textile samples laid out in large vitrines.

In 2013 the Museum of Fine Arts of Liège presented an exhibition dedicated to Sonia’s work that was made in Paris at the Workshop Simultaneous, between 1923 and 1934.

London's Tate Modern presented The EY Exhibition: Sonia Delaunay from April–August 2015. To demonstrate her strong belief that the Applied Arts are on a par with Fine Art, Tate Modern featured the ground breaking paintings, textiles and clothes she made throughout her career, as well as the results of her innovative collab­orations with choreographers, poets and manufacturers, from Diag­h­ilev to Liberty.

The Rivoli Cinema in Camberwell installed Sonia Delaunay-based carpets when they renovated in 2000. Deco fans love them.

Thank you! Of all the Art Deco elements that were preserved from the 1939 original Rivoli building, the Sonia Delaunay-based carpets stand out grandly.

Hello Hels, Delaunay's style seems to work because her geometric shapes are as bold as her colors. Through your post, I can see the bridge developing between Cubism and mainstream Art Deco.

In honor of the Holiday this weekend, I wish you a Happy Rosh Hashanah, and a great upcoming year.
--Jim

very rarely do art historians credit Art Deco (c1925-1939) as drawing inspiration from Cubism (c1907->). From fast trains, sleek ships, stylised working men, sunrays, ancient Egypt etc etc but not from Cubism. But Delaunay has clearly shown that she and others could adapt Cubism to new ends and to influence new directions.

I hope the New Year is a healthy and happy one for us all. And some peace on earth would be good too!

my pleasure. Did you see any of the Delaunay exhibitions I mentioned? Do you know of any recent exhibitions (for example from 2005-2015) that I could add?

Thank you. Some women artists, like Sonia Delaunay, were not just talented... they were confident as well!