In honour of my late father: Women's Land Army: WW2

My father graduated from university in Dec 1943 and became a Lieutenant and an engineer in the Australian Army in 1944 and 1945. When he passed away this week, I wanted to honour him with material that he gave me decades ago...on The Australian Women's Land Army. They were women doing a huge job, women he had been proud to work with. 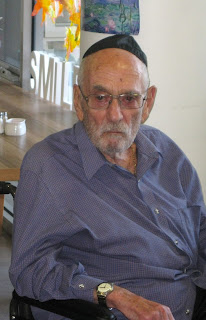 Our Land At War: A Portrait of Rural Britain 1939-45 was written by Duff Hart-Davis (published by William Collins in 2015). Unlike histories that concentrated on British service men and women on the Continent, this book discus­sed how European warfare began to affect the civilian population back in rural Britain. Apart from the risk of bombs that the entire nation faced, rural Britain also had to deal with finding local young men to join up; paying higher taxes; prov­id­ing homes for motherless children evacuated from the cities, the arbitrary conversion of pasture land into train­ing camps, firing ranges and airfields; and the arrival of many of soldiers and foresters from across the British Empire. Prisoner-of-war camps meant that captured enemy soldiers lived near rural towns and villages; and farmers faced new restrictions on what they could grow on their own property.

At home, women had to deal with the inevitable costs of war by themselves: raising children alone, managing family finances on one or no salary, inadequate food and heating, and the grief of having fathers and brothers killed, wounded or captured.

In the early 1950s I had heard so much about the wonderful Women’s Land Army in Australia, so now I have become interested in the Women's Land Army in Britain as well. As British men were conscripted, women were needed to work the land and there was no doubt that the culture shock was felt on both sides of the gender divide. The young women chall­enged cultural assumptions regarding gender and femininity; both farmers and male rural workers had to change their thinking about women workers very quickly. 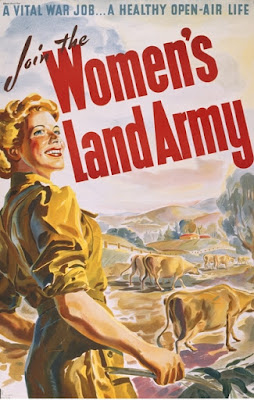 Join the Women's Land Army 1943
The British poster depicted a smiling, healthy young woman in a WLA uniform. She was looking over a dairy farm where she worked.

It was not a doddle. As the Land Girls lived either on the farms where they worked, or nearby in hostels, the young women had to deal with missing their family and friends. Then these young city women were confronted with the daily ordeals of really heavy farm work. Parts of the Land Girl uniform were hated by the women who felt lumpen in them. And the pay was dismal. Land Girls earned only £1.85 for a 50 hour working week, although in 1944, their wages were increased to £2.85. Worse still Land Girls laboured long and hard, often without enough daily protein.

Nonetheless women joined up in great numbers, and by 1944 there were 80,000 women working on the land in Britain. The majority of these women thoroughly enjoyed the responsibility and the independence, and remained friends with other Land Girls long after the war ended. 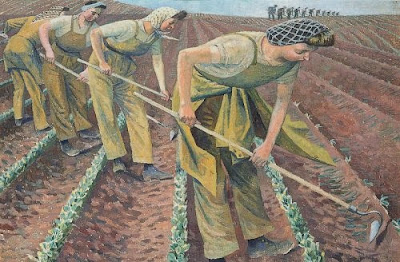 Back at home, the Australian Women's Land Army (AWLA) was created in July 1942 in Australia to combat the inevitable farm-labour shortages that war brought. Based on Britain Women's Land Army, the AWLA’s task was to train and organise female workers to be employed by farmers whose male workforce had already left the countryside.

In January 1942 a Federal Manpower Directorate was established and took over responsibility for the list of reserved occupations. The Director-General of Manpower could exempt any person from service in the armed forces; declare which industries were protected and could require a permit for any change of employment. So it made sense that when state and priv­ate women’s land organisations began to form, it would be under of the control of the Director General of Manpower.

The minimum age for recruits was 18. The AWLA had two types of membership: a] Full-time members were enrolled for continuous service for 12 months or more. They received a dress uniform, working clothes and equipment. And b] Auxiliary members were available for periods of not less than four weeks at nominated times of the year, for seasonal rural operations. They received working clothes, and essential equipment on loan. The AWLA reached its peak enrolment in December 1943, with 2,400 permanent members and 1,000 auxiliary members.

Often unskilled in rural work, city women were given farming train­ing and preparation for hard work. The Land Army women worked a 48 hour week, earning much less than their male counter­parts for the same labour. Actively recruited into tough men’s jobs, these young women drove tractors, grew vegetables and fruits, raised pigs and poultry, cut timber and looked after sheep and wool.

Patsy Adam-Smith expressed it well: early in the war, Australian women had beaten a path to the doors of the author­ities, begging to be allowed to assist, to help win the war, to give of their talents. After the war, the women felt proud of themselves, had made an important contribution to the war effort and had learned new employment skills. So the transition back to normal, when women were expected to give up their jobs for men who returned home from overseas conflicts, must have been horrible. 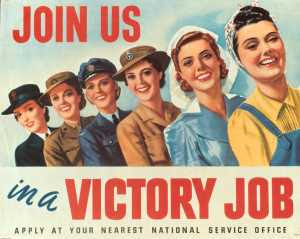 Join Us in a Victory Job 1943.
This Australian recruiting poster was created in the Department of National Service. Services included the Australian Women’s Land Army, Australian Army Medical Women's Service and other military services

The AWLA disbanded on 31st Dec 1945 because theirs were jobs for the war, not for life. Even after the war, little credit was paid to the essential service the women provided. AWLA was not considered a military service so the women never received the benefits, eg pensions and special housing loans, that were available to those women who joined WRANS etc.

In 1997, many Land Army women became eligible for the Civilian Ser­vice Medal. But it took until the 70th anniversary of the organ­is­ation’s birth before the Australian Government recognised and thanked the now-elderly women for their heroic efforts. A reception was held in Parliament House in August 2012 where atten­d­ees were presented with a certificate, a brooch and a history publication of the AWLA. A bit late, I would have thought - how many women, old enough to work in 1942, survived till 2012?

I think the Australian Land Army women had it better than their English counterparts. About this time women were employed as tram conductors on the same pay as men. So sorry about your father. It's rough losing both parents at such a close interval.

he was a very fun dad :) And he retained an amazing memory into his final few years. I asked him for Australian history that I could use in this blog and he was a source of amazing material about the 1930s and 1940s. His three posts that I already published covered:
1. the Australian Women's Land Army,
2. the Eddie Leonski Brownout Murders and
3. the American soldiers bringing nylon stockings to Australia to charm the local lasses and their mothers.
A fourth, as yet unpublished, covers a battle between 3,500 Australian and American soldiers in Melbourne in 1943, stopping the trams in the centre of town and calling in every ambulance in the city.

I am not quite certain about how women in the two Land Armies compared. The labour was as heavy in farms in both countries and the food supplies and sleeping conditions seemed a bit primitive in both countries. So it depended largely on how well the men accepted the young women's newly found freedom. My guess is that English men in rural towns might have been more rigid and sexist in their expectations of city girls. It is possible that Australian land owners and farmers were more open to lovely young women in sexy overalls ... I mean uniforms. My father was!

Hello Hels, You have my sympathy for the loss of your father--it sounds like he was an interesting man, who lived through much vital Australian and world history.

I have always been struck by how many ways that people worked hard on the home front--we hear about Rosie the Riveter and similar factory workers, but there were many types. Perhaps America had something similar to the Women's Land Army, although I am not aware of it. Milton's oft-quoted line about they also serve who sit and wait is too often misapplied to wars, implying an inactivity that so much evidence belies.
--Jim

Thanks for showing me this article. My mum happily Did Her Bit in the Women's Land Army. Her mother was very anxious about it.

Agreed.. there were many types of workers, all necessary, all contributing to the war effort. I suppose Rosie the Riveter and the Land Army women were especially important because they showed that women were just as competent, just as concerned about their families and communities, and just as nationalistic as men were. For many women, it was the _first_ time they could act on their commitments, not shamefully but with the grateful thanks of the government.

My father was conscripted and had no choice. But Rosie the Riveter and all the other women he worked with were volunteers. Their volunteering was even more honourable, I think.

I can imagine that there were many parents who were very anxious about their young daughters leaving home and going to work in some rural and rather isolated farm or town. Phone calls were too expensive, but I bet your grandmother was writing often.

My mother worked in The Maribyrnong ordnance factory. I wonder if she told her parents where she was going each morning.

My condolences for the loss of your father.

I wish I had recorded my own father's memories of the 30s and 40s before it was too late.

I'm sorry about your father, hope the good memories give you strength for today and always. Greetings and best wishes!

Thank you. We know all parents have to become old and frail, but intellectual certainly doesn't stop the grieving process. And losing mum in Feb 2015 and dad in Aug 2015 doubled the sense of loss.

Recording both parents' memories and experiences was a brilliant move on my behalf. They were in a care home for the last 2.5 years and had plenty of spare time. My brother visited every Monday, Wednesday and Friday, while I visited every Tuesday, Thursday and Sunday. I selected a different topic each week (eg their favourite composers, novels read, the experience of adoption, which countries they most loved visiting etc, who they went out with before marriage) - fortunately their long term memories were perfectly intact.

Many thanks. Although the future looks a bit lonely at the moment, my blog has benefited greatly from my father's contributions. For that I am very grateful. He also gave me wonderful photos from all the trips he went on with my late mother, to every country in Europe, North America, Asia and the South Pacific.

The Pallant House Gallery in Chichester is hosting a remarkable collection of lost works by war artist Evelyn Dunbar. Highlights from the artist’s lost studio, discovered in a Kent attic in 2013, will reaffirm Dunbar’s position as one of the most significant British figurative artists of the 20th century.

For Dunbar the war offered new opportunities to explore the relationship between people and the natural world. In pictures examining how the war effort affected the home front, we see Dunbar move out of the realm of the domestic garden and into the productive world of farming. Her principle subject, the Women’s Land Army, gave rise to compositions such as Men Stooking and Girls Learning to Stook 1940 and Milking Practice With Artificial Udders 1940.

The exhibition will continue until 14th February 2016.

I must say I didn't know of Evelyn Dunbar's work, until I looked her up just now. Thank you for the information about the exhibition... I will add a painting of the Land Girls at work to my post.