In 1887, while women were still denied the right to vote in the Australian colonies, 7 women began medical degrees at the Melbourne Medical School and two of them graduated in 1891. And the University of Sydney Medical School first produced two women grad­uates in 1893. Yet by 1914, only two decades later, there were 130 women registered as medical practitioners across Australia. Of course their access to hospital residencies and clinical appointments was still highly restricted, but they were there!

As soon as WW1 erupted in 1914, women doctors quickly under­stood the demands it would make on doctors, nurses and other health professionals. The women doctors responded with the same mix of motives that male doctors felt – to serve God, King and country; to get away from the confines of home and see the world; and to practise their profession in a useful way.

But for women there were additional considerations. The war might enable career opportun­ities to open up for women doctors who in 1914 were still margin­alised within the profession. The thinking went that if the war continued, the need for doctors would be so great that women would be fully accepted within their profession. 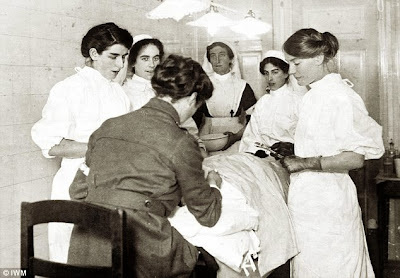 operating on patients in Paris

Voice Newspaper also tells another story. War was an extraordinary test of the limits of the profession, and would elicit vast advances in medicine: plastic surgery, psychiatry, and innovations in the treatment of wounds and disease. Ambitious women wanted to be part of those advances.

It will surprise no-one that the Australian and the British Armed Forces refused to employ women doctors. The British Army did eventually relax the case against women doctors later in WW1, but the Australian Army did not appoint a female doctor until 1943! So women took other routes eg working for the Red Cross. Occasionally they travelled in independent medical units. Dr Louisa Garrett Anderson was the first woman in Britain to cross the Channel and set up an operating theatre in an empty hotel in Paris. Within days, she was operating on wounded French and Belgian soldiers .

Were the Australian policy makers worried that women would be killed or wounded in the war zones and were being very protective of the gentle sex? Was the army fearful that poor hygiene and limited supplies would endanger the standards of Australian health care delivered in Europe? Apparently not. At least 2,500 qualified and experienced Australian nurses successfully served overseas during WWI. This suggests that it wasn’t being female that bothered the army. Rather it was that war was Men’s Business; female doctors would be officers and authority figures, a role in war that would be offensive to men. 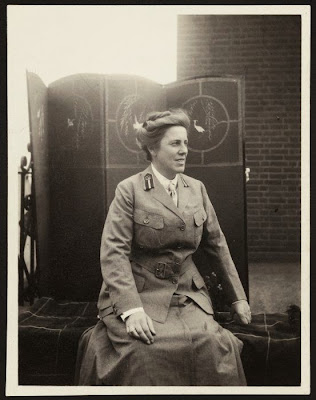 Australian Dr Agnes Bennett 1916-1917
She was the commanding officer of the 7th Medical Unit of the Scottish Women's Hospitals for Foreign Service in Macedonia and Serbia.

And another piece of evidence. Due to a lack of medical officers in 1917 and 1918, a number of Australian theatre sisters worked as nurse anaesthetists in Casualty Clearing Stations in France. The army was desperate and I am delighted that 9 Australian nurses were given permission by the Australian authorit­ies to participate - the British Army provided three months’ training for Australian, British and New Zealand nurses in the use of chloro­form and ether. Yet the same authorities could have easily permitted women doctors to work in the Casualty Clearing Stations in France, partially solving the core problem: lack of medical officers.

In the event, it seems that twenty five Australian women doctors served in WW1. But because they were not allowed to serve in an Aust­ralian unit because of our governmental policy, their contribution has never been formally recog­nised here in Australia. They HAD to serve in other units overseas.

Looking For the Evidence is full of excellent examples. In 1914 Dr Katie Ardill applied to serve with the Austral­ian Expeditionary Forces and was of course refused. So she made her own way to Egypt in 1915 and then onto Britain where she joined the British Expeditionary Forces as one of the first women doctors in field services. Dr Ardill was appointed to the medical staff at the County Middlesex War Hospital in St Albans in 1915. Her next appointment was at the Anglo-Belgian Military Hospital in Calais and was appointed to the rank of Captain. Under the British Red Cross Society, she worked in a Belgian hospital and then the Citadel Hospital in Cairo. Altogether Dr Ardill served for four years in Britain, France, Belgium and Egypt. Dr Agnes Bennett was also from Sydney. Serving with the French Red Cross, Dr Bennett became the first female commissioned officer in the British Army in 1915, when as a captain she worked in war hospitals in Cairo. In 1916-17 she was in charge of a unit of the Scottish Women's Hospitals on the Serbian front.

The Australian War Memorial has an interesting article called "Dr Phoebe Chapple: The first woman doctor to win the Military Medal". She became frustrated with the Australian army’s refusal to appoint women doctors so she travelled to England in February 1917 to enlist in the Royal Army Medical Corps. She was appointed as surgeon to Cambridge Hospital in Aldershot. Later, she was attached to Queen Mary’s Army Auxiliary Corps and moved to France to work.

Hello Hels, It is interesting that people were so vested in maintaining gender roles that they put the very war effort into jeopardy, not to mention accepting the extra number of deaths and injuries that must have inevitably resulted when legitimate doctors were turned away during such a critical shortage.
--Jim

1943 hey? That took a very long time to be formally recognised. Don't you wonder if any medical body looked after the women doctors once they returned back to civilian life after 1918.

Stupid men preferring to cut off their noses. If the serving female doctors haven't been recognised here, even though they were with other armies of organisations, it is high time they were given their due. I am surprised it has not happened already.

I read the Dr Phoebe Chapple article, thank you; it was super. But I wonder why it took till 2009 to publish the material. Did the Medical Journal of Australia discuss the women physicians and surgeons during and after WW1?

sometimes authority figures make principled decisions, even though they know perfectly well about the huge costs entailed. I was thinking exactly that today when talking about French King Louis XIV expelling or enslaving all his Protestant citizens. The economy was weakened beyond repair, but he didn't care - his priorities lay elsewhere.

I imagine the parents of the dead and wounded soldiers felt very differently.

good question. I have no evidence about how the women doctors were treated professionally, once they returned back to civilian life. If you find data, I will add it to my post.

I do know that since their contribution was not recognised as War Service in the normal sense of the word, they could not have claimed RSL membership, health benefits for ex-servicemen, low interest house loans from banks etc.

good point. The fact that the Australian Army did not officially appoint a female doctor until 1943 probably means that recognition only came from that date on. Anyone who served from 1914 to 1943, without being approved and appointed by the army, did not have their service recognised ever.

I feel the same way about aboriginal soldiers in WW1. When war broke out in 1914, many aboriginals who tried to enlist were rejected because of race. By October 1917, when recruits were desperately needed, restrictions were eased somewhat. Yet only one aboriginal is known to have received land under the soldier-settlement-scheme, a scheme offered to every ex-serviceman.

Brisbane's Dr Lilian Cooper joined the Scottish Women's Hospitals in 1915, served for twelve months, including a time in Macedonia, and was awarded the Serbian Order of St Sava, fourth-class.

Lilian Cooper suffered discrimination because of her gender prior to the war, but returned to Brisbane post-WWI to grow a large and successful practice.

Thanks for the link.

I am relieved Dr Cooper did well after the war. It was so difficult for me to find information.

More than 57,700 Queenslanders served our country in the First World War. Explore the unique Queensland experience of the war — before, during, and after.

Through exhibitions and events, Distant Lines connects us with the intimate and untold stories of Queenslanders. See the substantial collection of letters, photographs and newspapers from the conflict, presenting the stories of 25 specific soldiers, doctors, nurses and chaplains. Particularly emotional are the photographs of Australian servicemen and nurses on board ships, sailing to Europe.

Thank you... the exhibition doesn't finish until Sunday 15th November 2015, so I will certainly be able to visit Brisbane before then. I can see from your photos that, far from women being kept away from the dangers of Europe, Australian nurses were welcomed in very large numbers.

Here is just one bit of historical evidence from Heather. A hospital for wounded soldiers was set up in Ostend. When the German army marched into Ostend in Oct 1914, the operating theatre was in full swing and Dr Isobel Ormiston (from Albury) refused to leave her post. A prisoner-of-war for several weeks, Dr Ormiston was repatriated to England in mid-November. Later she worked at Wounded Allies' Relief Hospital Montenegro (1915–17), British Red Cross Depot Cairo (1916) etc.