Queen Mary II (d1694) had no children but her sister Anne (1665–1714), who inherited the throne after Mary died, was pregnant most years of her married life. Just one of these 18 live births survived infancy and, if he lived, would have eventually inherited his mother’s throne. Called Duke of Gloucester, young Prince William was seen as a Protestant champ­ion. This was because his birth guaranteed the Protestant succession, estab­lished in the Glorious Revolution that had deposed his Catholic grandfather King James II.

Tragically not a single child survived Queen Anne, as we will see.

On the Continent, Princess Sophia (1630-1714) of Hanover was triply blessed. Firstly she was a child of Frederick V, Count Palatine of the Rhine. Secondly she was a grand daughter of King James I. And thirdly in 1658 she married Ernest Augustus who later became elector of Brunswick-Lüneburg-Han­ov­er. Sophia was a very educated young woman, a gifted linguist and a witty writer, raised in the vigorous Protestant life of the Dutch Republic. Even more to her credit, Sophia became a friend and admirer of Gottfried Leibniz while he was a scholar in residence at the Court of Hanover. And she was a dedicated patron of the arts.


Sophia became a widow in 1698, and at that point historians asked if her name was being considered as a successor to the British throne. We know that the House of Commons in London had earlier refused to place her in the succession.

But by 1700, the state of affairs in Britain suddenly became bleaker. Prince William, duke of Gloucester had just passed away at 11. King William III (d1702) was ill and child­less. Whatever the British Parliament thought of Sophia, they absol­ute­ly did not want the throne to revert to another Cath­olic! The Parl­iament had to bypass over 36 (or 56, depending on the source) Cath­olic candidates who had a better claim by blood than Prin­cess Sophia had. So the Parliament rallied; they passed the Act of Settlement 1701 with a sense of urgency. This Act, naming the Electress Sophia of Hanover and her Protestant heirs, settled the succession question for all time. 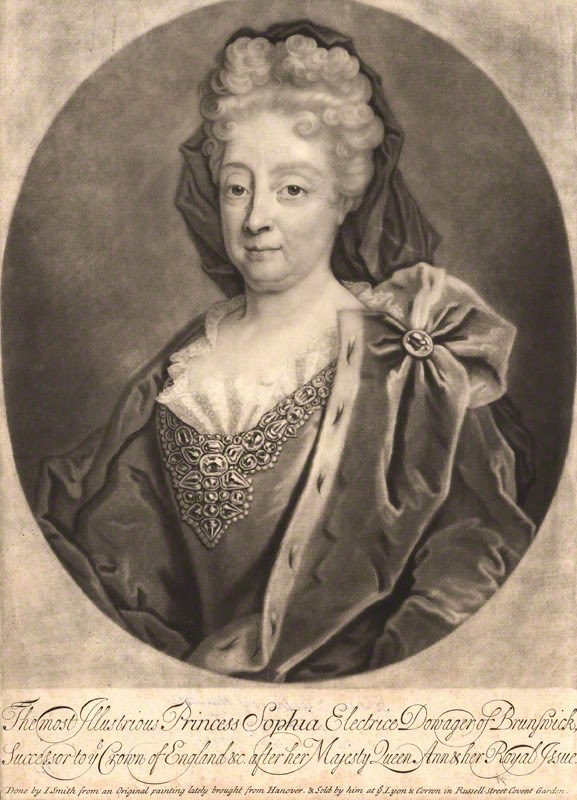 Since the Act of Settlement of 1701 called Sophia “the most excellent princess Sophia, electress and duchess-dowager of Hanover”, one wonders why British politicians did not bring Sophia to London straight away, to prepare her for her royals tasks and to enable her to immediately rule, in the event of Queen Anne's death. Queen Anne was not at all old, but she was grossly overweight, always pregnant and incapable of walking. Plus there was still a terrible fear that Queen Anne's Roman Catholic half-brother, the Old Pretender, would launch himself back to Britain and grab the throne. It made sense that the Protestant successor should have been made very visible in Britain.

In the event, the very excited heir presumptive Sophia had to watch the last years of the reign of Queen Anne from a distance. In June 1714 Sophia was sit­ting in Hanover with her bags packed and her maids ready to travel, when she died aged 85. Queen Anne died in August 1714, aged 49. Two months later Sophia’s son George, a man not at all interested in leaving Germany or in learning English, became King George I (1660–1727) of Britain.

Although I feel terribly sorry for Sophia, I wonder if the world would have been a different place, had she become the British queen? Probably not. Sophia was already a very elderly lady. Could she have prepared son George better? Of course. George may not have even vaguely understood that the Jacobites (and some of the Tory Party) would want to depose him and replace him with Anne's Catholic half-brother, James Stuart. He had to learn quickly - in 1715, the Jacobite Rebellion commenced.


I saw warm recommendations for two books I have not read. The Georgian Princesses by John Van der Kiste is an account of the princesses and consort Queens of the Georgian era, from Princess Sophia to William IV’s Adelaide. And JN Duggan wrote Sophia of Hanover: From Winter Princess to Heiress of Great Britain, 1630-1714.

Just as well Princess Sophia did not have to face the Jacobites. Here are my notes from that time.

The treatment of Scotland before and after the 1707 Union meant there was always strong support for getting the exiled Catholic Stewarts back onto the throne. The Jacobites presented themselves as defenders of Scottish liberties.

It was after the death of Queen Anne in 1714 that the 2nd Duke of Argyll led the government forces in the terrible 1715 Rebellion.

Just some aspirin and destiny would gave been different. I think 51 were passed and seems the most common number to most history books here

the dates suggest the Jacobite push to regain the British throne was inevitable, nod.

A complex family tree but even so, Sophia would not have been the first person in consideration for the throne. Far from it.

Queen Anne objected to Sophia’s name even being mentioned in her presence and any suggestion of inviting Sophia to visit England was rebuffed. A letter from Anne to Sophia firmly banned the Hanovarian and her family from England, while Anne was still alive.

Thank you for the reference. What made Queen Anne so furious about her nominated successor? They had never met, as far as I know.

Hello Hels, It seems that even in lines of royal succession, there is a lot of planning and selection that goes on--sometimes, but certainly not always for the general good.

On an unrelated note, I hope that you and your family have a very happy New year, and a great 2015.
--Jim

I don't suppose it would have made much difference to the ordinary citizens, who succeeded Queen Anne (or any other monarch for that matter). But the consequences of the battles for succession were tragic. In 1714-15, soldiers on both sides were massacred, cities burned to the ground, Jacobite supporters imprisoned or executed or transported to America.

I read the chapter in the John Van der Kiste book which adds complexity to the story. As late as 1713, Queen Anne was seriously considering changing her mind about her successor and calling her Catholic half brother back from France.

Van der Kiste agrees about the letter. But notes that Queen Anne actually wrote three strongly worded letters: to the Electress Sophia, to her son the Elector George and to her grandson the Electoral Prince. Anne warned that any attempt on their part to step foot on English soil during her lifetime might lead to most undesirable results.

thank you. I have some reading for tonight :)

The full reference is The Georgian Princesses by John Van der Kiste https://books.google.com.au/books?isbn=0752494910