Early in the 17th century, the Dutch East India Company really did have a vigorous trade with the East and imported beautiful and very expensive Chinese porcelain. Of course only the richest of the rich could afford the early imports.

The Dutch potters did not know about kaolin and could not create porcelain themselves. So they began to imitate Chinese porcelain with whatever technology they had, particularly after the death of the Wanli Emperor in 1620. This was when the supply from China to Europe was interrupted. Delftware was never going to be as fine as real porcelain, but the Dutch tin glazed earthenware pottery was impressive in its own right. It must have worked - by the late 17th century there were 30+ substantial pottery works in Delft alone. 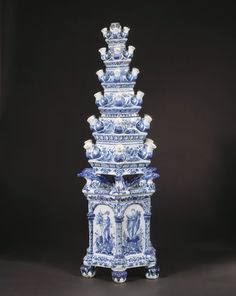 In any case by Feb 1637 that tulip traders could no longer find new buyers willing to pay increasingly inflated prices for the precious bulbs. As this realisation set in, the demand for tulips suddenly collapsed and prices plummeted. Tulip Mania ended but the passion for fresh flowers did not.

A tulip vase, that is a vase with spouts that could hold tulips, could actually hold any flowers in an exuberant display. Let me cite Amanada Dunsmore (Gallery Magazine May-June 2014), who is the senior curator of International Decorat­ive Arts in Melbourne’s most important state gallery, the NGV. She described a very important object, newly acquired by the NGV, as a magnificent seven piece pyramidal flower vase. One metre high, the vase was made in the 1690s at one of the famous earthenware potteries in Delft in the Dutch Republic. This is one of those factories’ most technically and artistically stunning works of art.

The vase stood on a hexagonal base moulded as a columned, classical pavilion, topped with recumbent frogs that supported the six tiers above. Each tier comprised a water reservoir adorned with six open-mouthed, animal headed spouts intended to hold a variety of cut flowers, including tulips and roses. The blue and white palette was inspired by imported Chinese porcelain, yet the decoration on this vase was a mix of European and Chinese motifs, Chinese characters and birds on rocks amid flowering plants, a common decorative motif on 17th century Chinese porcelain.


Stadtholder William of Orange and his wife Mary moved from the Netherlands to Britain and began their joint reign as King William III and Queen Mary II in February 1689.

The many amazing vase-structures reflected Queen Mary II’s great patronage of the Delft potteries and their increasingly exuberant product­ions inspired by Chinese porcelain. Queen Mary’s collection of Chin­ese-style pottery at Kensington Palace numbered almost 8,000 pieces. Her china-mania, as Daniel Defoe referred to it, fed the productions of the Delft factories and encouraged the development of pyramidal vases with spouts. They became increasingly grander in scale towards the end of the century and were commissioned by royalty and nobility all over Europe. The vases became symbols of wealth and prestige at the most elite level. 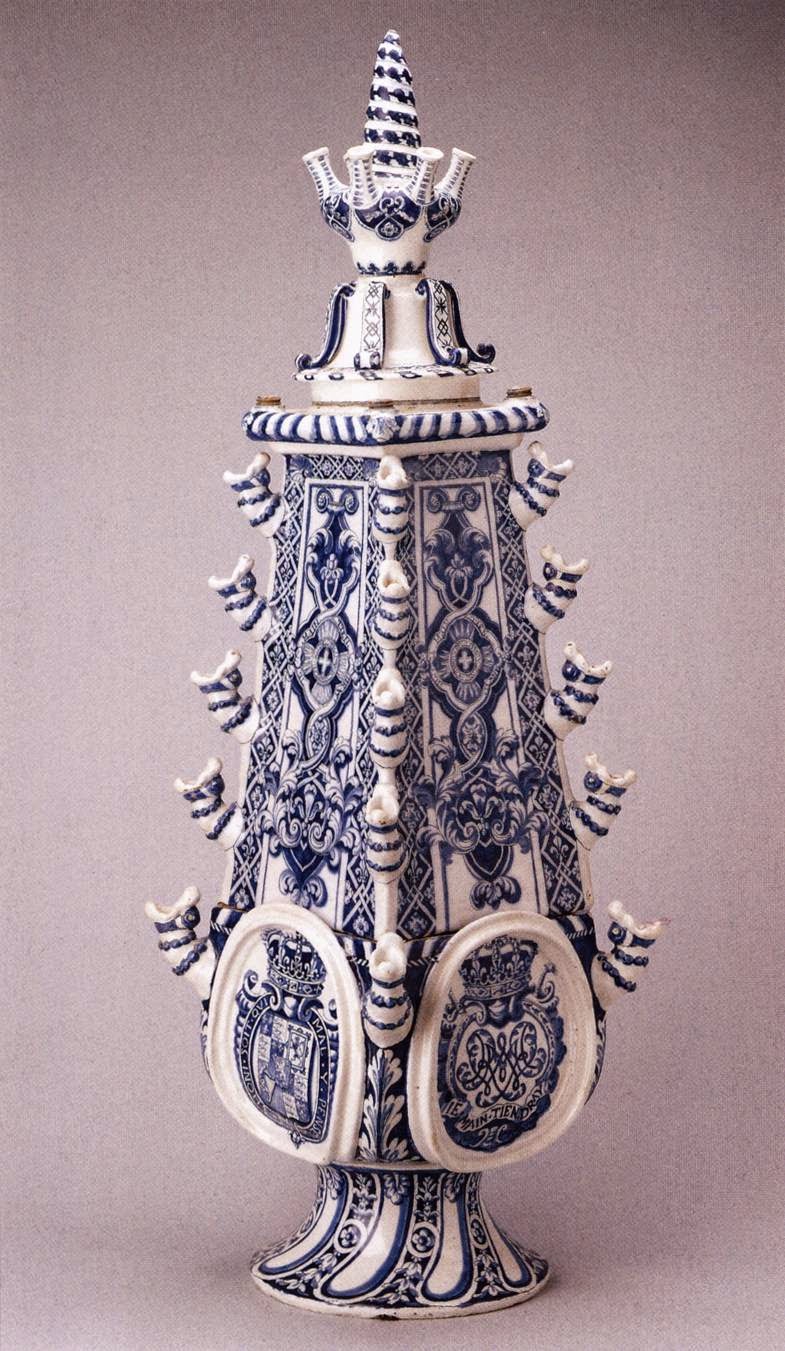 There are several points I would like to raise, not covered by the NGV description. Firstly why were the earlier 17th century tulip vases small­er and less spectacular than those from the 1680s and 1690s? Pottery skills had not advanced throughout the century and passion for pottery vases had, if anything, marginally gone down with the passing decades.

Secondly why did the nation continue to pour money into monumental flower vases, decades after the tulip sensation ended in the Netherlands? And why did the pottery makers have to wait for Queen Mary II for endless royal patronage? Earlier rulers in the newly independent Dutch Republic must have surrounded themselves with both fine art and decorative arts de jour.

I don’t know the answer to these questions, but I do know that by the end of the 17th century, Delft faience became very, very popular in the Netherlands. Queen Mary was not alone. Delft potteries were also commissioned by King William III to make impressive tulip pieces to decorate the palaces of his new kingdom across the Channel. Examine (photograph above)  a large tulip vase that was made in the Delft pottery De Grieksche for the stadholder-king, as we can tell from the royal arms. 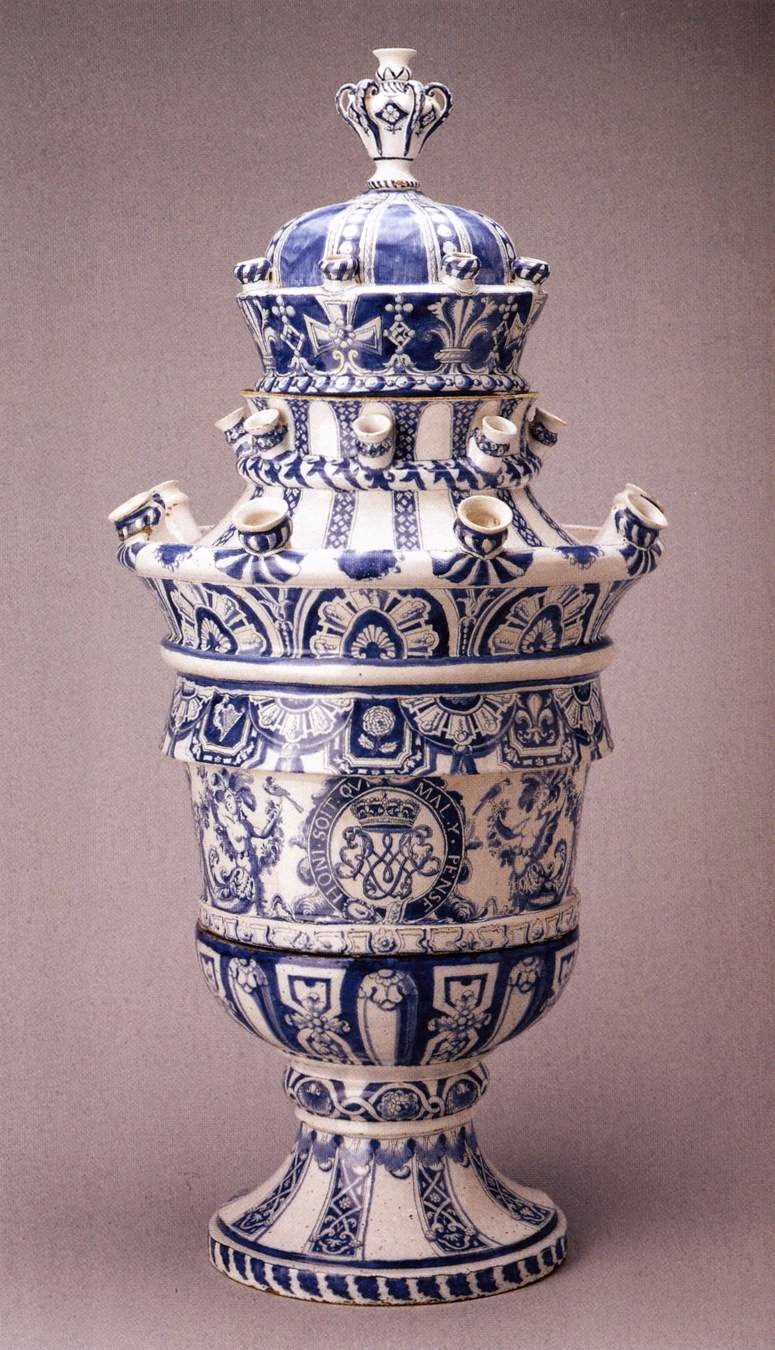 
My personal favourite was another tulip vase with the arms of Wilhelm III, 1691. As the photograph shows, it too was made from blue painted faience, is 1.1 m high, and can be found at the Royal Collection, Hampton Court. This vase was more aesthetically pleasing because the spouts were arranged around the vase in horizontal rather in vertical bands, and because the top section resembled a beautiful crown.

Hello Hels, I wonder if iconographic evidence of Delft vases would yield any clues to their use and development. By coincidence, I was just looking at a Bosschaert still-life for sale at Sotheby's with paintings from the Mrs. Paul Mellon collection, but those flowers were arranged in a simple glass vase. There are some good paintings in this sale, but when one thinks of what passed through the Mellons' hands (or what they funded)! Here is the link:
http://www.sothebys.com/en/auctions/ecatalogue/2014/masterworks-mellon-n09245/lot.33.html

Are you buying the Bosschaert who had the best eye for detail? His floral still lives were breath-taking. But I didn't realise that he was painting them so early (1605-10).

The Mellon still life's glass vase is lovely, but compared with the large pottery vases of the later 17th century, it had several disadvantages: 1. the glass could have come from anywhere and didn't stand for the Netherlands in general or Delft in particular;
2. flowers were more expensive than the vase in the early 17th century, so bunching all the flowers together might not have given each flower its individual glory.

Examples of true porcelain were arriving in droves from China and of which Chatsworth has a fine collection.
This went on until well into the 18th century when tin glazed earthenware provided English and European states with a means of producing their own ceramics and also using local motifs from cultural sources as an expression of national pride.

Baluster flower vases, pyramids and urns abound all true examples of Baroque exuberance and the Deft Dutch Delft painters rendered blue and white scenes using the evasive substance cobalt. The pyramidal form of these highly desirable Delft tulip vases is symbolic of the hierarchy attached to the contemporary society of the time.

I assume the 1st Duke of Devonshire saw the Delftware vases in William and Mary's palaces. He quickly bought his own pieces to show his solidarity with the new royal family and with the Protestant renewal.

Your photo of the three pyramid vases at Chatsworth is excellent.