Arturo Toscanini (1867–1957) was born in Parma where he studied the cello and later was selected to play in the orchestra of an Italian opera company. In 1886, the teenager conducted his first opera, sur­prising everyone with how well he managed the orchestra. And he never looked back; Toscanini went on to conduct 18 operas, to great acclaim.

His reputation as a cellist might have been limited but as an operatic conductor, his career sky rocketed. How clever of him to fo­c­us on beloved Italian musicians, conducting the opening presentat­ions of Giacomo Puccini's La bohème in 1896 at the Teatro Regio in Turin and Ruggero Leoncavallo's Pagliacci in 1892 at the Teatro Dal Verme in Milan.

Toscanini married Carla De Martini in 1897 and went on to have four children within the decade. These were busy years. In 1896, Toscan­ini conducted his first symphonic concert in Turin, focusing on the music of Schubert and Tchaikovsky. And within a coup­le of years he had become the Principal Conductor at La Scala where he happily remained until 1908. And to prove that Toscanini could make it abroad, he conducted at the Metropolitan Opera in New York from 1908 until WW1.

In 1915, Toscanini felt it was time to return home and once his season at the Metropolitan Opera ended, he booked a ticket on the British ocean liner Lusitania. It was believed that both the Lusitania and its sister ship were the most luxurious, fastest and roomy ships imaginable on the North Atlantic run. 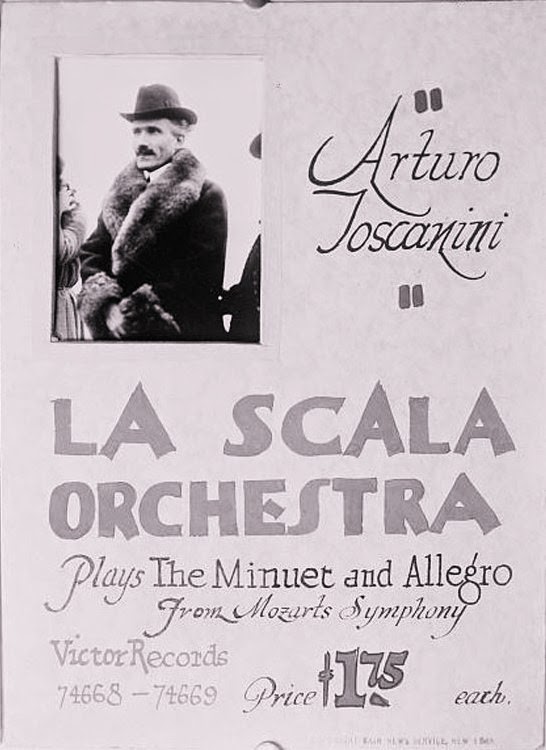 
So I have no idea why Toscanini ended his concert schedule in New York abruptly and left a week earlier than planned. Greg Daugherty suggested that the conductor was hyper-anxious about the Met’s management of finances, the poor performance of Carmen and his relentless workload during the opera season. Or to escape from Geraldine Farrar, a beautiful diva with whom he was ending an affair. What I do know is that he sailed towards Europe on an Italian ship, not on the Lusitania.

Perhaps the beautiful cruise ship Lusitania WAS carrying armaments for Britain, as the Germans claimed. In any case the Germans had already stated clearly that they would order unres­tricted submarine warfare in the waters around Britain; they would attack all ships that entered this war zone. So on 7th May 1915, the Lusitania was torped­oed by a German submarine off the south coast of Ireland en route to Liverpool. Within 20 minutes, the ship disappeared in the Celtic Sea; of the 2,000 passengers and crew on board, 1,200 people drowned.


Toscanini was not the only famous person who stayed alive when so many others died on the Lusitania. Lady Duff-Gordon (1863-1935), the hugely important fashion designer Lucile, had survived the Titanic on its trip to the USA in 1912!! By 1915 she wanted to go home to Britain and had booked her ticket on board the RMS Lusitania. Lucile, who apparently postponed her trip home due to illness, could consider herself a VERY fortunate soul!! 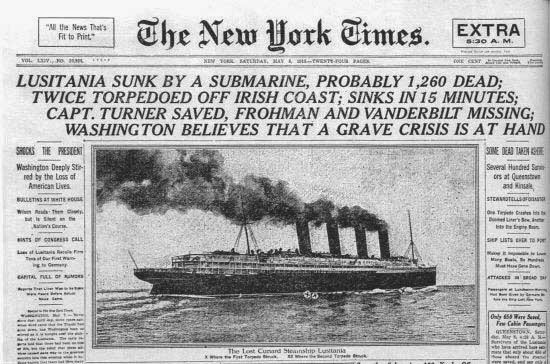 Importantly for this blog, we note that the Palestine Symphony in Tel Aviv would not have been the huge success that it was if Arturo Toscanini had died in 1915.

Bronislaw Huberman had to move Europe’s most brilliant Jewish musicians to a safe haven before WW2. He decided to tour across Central-Eastern Europe, to interview any musician who wanted to play in his to-be-established Palestine Symphony; if a person was selected, Huberman guaranteed to get him and his family a visa out of Europe. Eventually the Palestine Symphony did start its concert tours in Dec 1936 led by the greatest conductor then alive, Arturo Toscanini. Golda Meir, David Ben Gurion and every other communal-cultural figure in Palestine were at the first concert, which was held in the Italian Pavilion of the Levant Fair Ground in Tel Aviv. Perfect.

Lusitania: life, loss, legacy is a permanent exhibition at Merseyside Maritime Museum exhibition that marks the centenary year (1915) of the sinking of the Lusitania in Liverpool. Highlighting new research about the people involved in the Lusitania story, the display also considers the role of Liverpool’s liners in WW1. This event devastated the tight-knit dockland communities in north Liverpool, where most of Lusitania's crew lived. 405 crew members died, including many Liverpool Irish seamen.

There were so many business stars and cultural leaders who died on the Lusitania. Didn't they know about the World War and its imminent dangers to shipping?

a year after the War To End All Wars was decimating the population of Europe, I would not have gone on an ocean cruiser, even the most glamorous in the world. Especially since "on the day the Lusitania set sail from New York, the German Embassy ran ads in US newspapers, warning travellers to avoid liners flying the British flag. But the warnings went largely unheeded, due in part to the belief that the powerful ship could outrun any pursuant" (Smithsonian).

What amazing twists and turns of fate you highlight here. So interesting to speculate what could have been the course of history if other decisions had been made. But then, that is so often the case in life.

*nod* I often speculate on changing the course of history _en masse_, and I ask the students to as well. For example, might WW1 have finished much sooner, if the Americans had entered the war in 1914, instead of remaining neutral? How might Ireland's modern history have been different, had Oliver Cromwell led his campaign elsewhere?

But until now, I have never thought about changing events _at the individual level_. One individual, even a talented one, seems too puny to influence nature.. or history.

So interesting.
I wish I had been born earlier to see that concert in Tel Aviv.
When I first began to study and love classical music in school all the records I bought were conducted by Toscanini, but alas, the maestro was already dead.

Hard to imagine "the belief that the powerful ship could outrun any pursuant."

In 1934 Bronislaw Huberman and his wife returned to Palestine where he con­ceived of the idea of moving Europe’s most brilliant Jewish musicians to a safe haven. Although Toscanini didn't get to Tel Aviv until Dec 1936, can you imagine the excitement for those fortunate citizens who would have heard the orchestra play?

They saved 73 world-class musicians, their spouses and children from almost certain extermination in the Holocaust.

Welcome to the new Lusitania gallery at Liverpool's Merseyside Maritime Museum. It opened to the public in March 2015, 100 years after the ship was sunk by a German submarine.

Thank you. I have added a note about the new Lusitania gallery onto the blog post.