Paris and Baron Haussmann: what happened to the city's gorgeous arcades?

I love Paris’ gorgeous shopping arcades, built in the late 18th century. But I couldn’t understand why so few survived.

Here is an article written by Spud Hilton and published in the San Francisco Chronicle. Then I will come back to my theory about Baron Haussmann and the modernisation of Paris.

Hilton wrote that the idea of arcades in Paris was sound. City planners in the late C18th developed covered pedestrian arcades for shopping as an escape from foul weather, an alternative to foul streets that at the time had too many horses, too few footpaths and too much sewage in a city with non-functioning sanitation. Of the 150-200 arcades, about 20 remain today. They fell out of favour, especially after the city's move toward grand boulevards later in century, and most were demolished or reused.

The arcades also are lesser known in part because most are in the portions of Paris' 2nd, 9th and 10th arrondissements that hold few other attractions for tourists. So few tourists see Galerie Vivienne, built in 1823, which is among the most-refined and best-preserved arcades. Note the rows of faux-marble columns, the fashionable storefronts, sculptures of goddesses and the elegant glass canopy. Note the floor with its wall-to-wall neoclassical mosaic designed by Italian artist Giandomenico Facchina in the mid-1800s. Visit Librairie Jousseaume, an antique bookstore that opened to the public about the same time as the arcade itself. 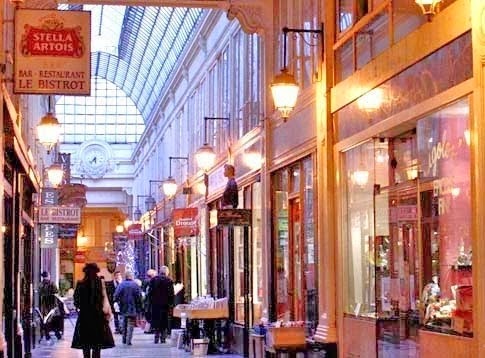 The similarly upscale Galerie Colbert runs a parallel L-shaped course next to Galerie Vivienne, but is home to exhibitions, university ann­exes and a back door to restaurant Le Grand Colbert, a chi-chi brasserie.

After walking from the Latin Quarter and crisscrossing the 2nd Arr­on­dissement untold times, Hilton welcomed the variety of cuisine and the opportunity to relax and Parisian-watch in Passage des Panoramas. First built in 1799, Passage des Panoramas is the oldest remaining arcade, as well as the first building in Paris equipped for gas lighting. It rests on the site of the former Hotel de Montmorency Luxembourg, and was named for two enormous panoramas inside rotundas that were torn down in 1831.

The arcade is the poster child for the romance of early shopping arcades, something that French author Emile Zola used repeatedly in the short story Nana, about a young Paris prostitute in 1867 who becomes a stage performer. Zola wrote "She adored the Passage des Panoramas. The tinsel of the Article de Paris, the false jewellery, the gilded zinc, the cardboard made to look like leather, had been the passion of her early youth. It remained, and when she passed the shop-windows she could not tear herself away from them.”

By design, Passage Jouffroy and Passage Verdeau continue the same line as Panoramas. Stroll through Paris from the 2nd Arrond­issement to the 9th, and only step into the open to cross Blvd Montmartre and Rue de la Grange Bateliere. Built in 1846 based on the popularity of Panoramas, Jouffroy is mentioned in the 1852 Illustrated Guide to Paris listing of passages as "one of the most frequented in Paris. Inside is the front door to the Hotel Chopin. The hotel, with surprisingly inexpensive rooms that run from tiny to tinier, opened in 1846 as one of the first tenants.

Hilton continued to the far end of Jouffroy and across the street to Passage Verdeau, where the architecture and design are essentially the same, but the businesses seemed smaller. 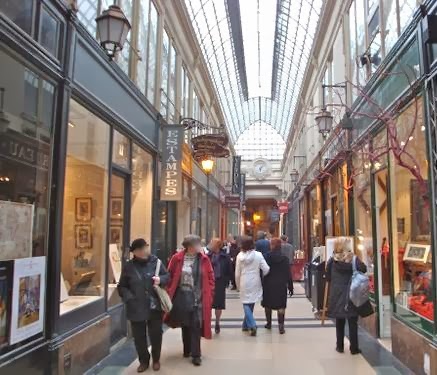 opened in the early 19th century and remains open today

More so than any other covered arcade, Passage du Grand Cerf gives the impression of the height, design and grandeur of a European train station but without the width of even a single platform. Grand Cerf is the only covered arcade left constructed just of iron and glass (gilded in dark woods), reflecting the more industrial nature of the Saint-Denis district, which in the 1830s was filled with small fact­ories and workshops. It is also the tallest of the arcades, increas­ing the train station illusion. From Grand Cerf, Hilton exited onto Rue Saint-Denis, one of the oldest (Roman) streets in Paris.

Louis-Napoléon Bonaparte became Pres­ident of the Republic in 1848 and Emperor Napoléon III of the Second French Empire in 1852. He wanted action!! Baron Haussmann was presented to the Emperor by the Minister of the Interior, with the recomm­end­ation that Haussmann was exactly the man needed to carry out the renewal of Paris. Napoleon III made Haussman Prefect of the Seine in June 1853, and quickly gave Haussman a huge project: to make Paris less medieval, heal­thier, less congested and much, much grander. The plan was to take the unplanned medieval lanes into modern boulevards, extending far beyond the limits of the old medieval city walls.

From 1852 on, Haus­s­mann rather ruthlessly dem­ol­ish­ed irreg­ularly shaped medieval roads, rep­l­ac­ing them with wide, tree-lined boulevards and elegant buildings. The long strip of land north of the Seine, marked at one end by the Arch de Triumphe and by the Louvre at the oth­er, was link­ed by a wid­ened Champs Elysees, Place de la Con­c­orde and Tuil­eries Gardens. In 1862, work started on one of the largest, most decorative opera-house of all. It seated 2000, had a huge st­age and a VERY de­corated interior. Sacre Coeur Basilica was built by nat­ional subscription in 1876. The massive white structure, with an en­ormous flight of steps up the side of the hill, looks vaguely Byzant­ine. The paintings are mosaics of the interior are also very el­abor­ate. On the edge of Haussmann’s new city, people were en­couraged to love and use the huge parks - Bois de Vincennes in the east and Bois de Boulogne in the west. Smal­ler green spaces throughout Paris meant buildings had to come down. 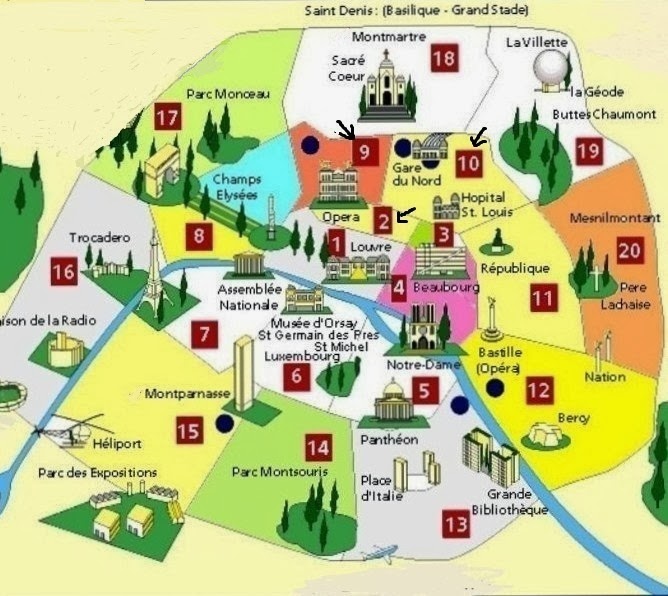 By the end of Baron Haussmann’s redesigning of Paris in 1870, anything old and unplanned lay in rubble. Or was rebuilt in a more modern style. Late C18th arcades, which had been considered the height of modernity at the time they were built, had mostly disappeared 100 years later.

I would still like to know why the surviving arcades tend to be found in the 2nd, 9th and 10th arrondissements, NW of central Paris. Were these more working class suburbs, and therefore of lesser concern to the energetic Baron Haussmann? I doubt it. Grands Boulevards and Opéra 2nd-9th-10th arrondissements were clearly very popular cultural and recreational areas after the modernisation of Paris. On the boulevard Haussmann, close to the Opera House,  Le Printemps (opened 1865)  and  Les Galeries Lafayette (896) were, and are, the most delightful department stores of the French capital.  Café de la Paix, the Opéra, the Folies-Bergère and Olympia could not have been more famous.

Hello Hels, It is too bad that more of these attractive buildings have not survived. There was a craze in America also for arcades, and Cleveland still has three close together downtown--the famous Old Arcade, the Euclid Arcade, and the Colonial Arcade. These had become rather moribund, but now all three have been restored.

I certainly understand a city's need to modernise. But part of the beautiful and important history of Paris was lost, willy nilly, without rebuilding. I suppose we can be grateful, at least, that 20 arcades remained intact.

Cleveland was very silly allowing the three arcades to become derelict and very clever restoring them. History is important... but people won't shop in historical arcades if the shops aren't beautiful.

I can't help but think what Paris might be like now if this grand plan was not carried out. While it wouldn't be the Paris we know, it would be very interesting, I expect.

dead right! The overwhelming issue for Haussmann was to put underground sewerage in Paris, preventing cholera epidemics and allowing the population to increase.

But I think the biggest difference for us moderns would be the straight boulevards instead of windy medieval streets. Imagine trying to run a modern public transport system in a large medieval town.

The beautiful Block Arcade is Melbourne is up for sale just now. What sort of loss would that be, if it was pulled down!

This is so very interesting and gives an insight into another Parisian world.

One or two rather fine arcades still exist here in Budapest but are, like so much else, very badly neglected.

the Block Arcade, built c1891, is really very gorgeous. The L-shaped structure with identical facades in Collins and Elizabeth Streets reminds me a bit of Galleria Vittoria in Milan, only smaller.

The Block Arcade is on the Victorian Heritage Register. I hope that means it is protected, whoever buys the property.

It seems that in many major cities, people moved out into the outer suburbs in the 20th century and the inner city was often left to moulder. This natural population movement is yet another issue, quite separate from bombing destruction in WW2 and Haussmann-like town replanning.

The only arcade I know in Budapest is Paris Court, modelled on the Passage des Panoramas in Paris!!!! What a small world :) You have to love the glass-cover on the roof.

Arcades are one of my favourite things to see in a city.

and who said Australian men don't like the finer things in life :) I think you are quite right, of course.

You brought back some memories here with arcades. Will renew the memories again late this year when we return.

Good on you for enjoying some of the more hidden parts of Paris. It is too easy to love the Eiffel Tour, Arc de Triomphe, d'Orsay, Louvre etc etc and miss the less monumental but still special sites.

We can probably say the same thing about every major city in the world. But how many cities have been as TOTALLY remodelled as Paris was? Certainly London and Chicago had their great fires and other cities had appalling earthquake or bomb damage.

Hi Hels, I was just reading about Walter Benjamin's literary collage that came to be called "The Arcades Project". Apparently loosely about the shopping arcades of Paris. Sounds like it would be an interesting read.

More reading for me!!

But it is never wasted - any useful references are added to my reading list for students, next time we study a relevant subject. So thank you.

Charles Marville’s pictures showed what was destroyed in Paris, in "Glimpsing a Lost Paris, Before Gentrification". The Metropolitan Museum of Art has a great show of Marville’s photographs in the Paris of Victor Hugo. Baron Haussmann, Napoleon III’s planning czar, was sweeping the old away to make room for the glittery, bourgeois metropolis that tourists love.

doesn't that Marville photo tell it all? A historical record of a city soon to be lost (or lost already). Thank you.

In a post about the lost world at the heart of Paris, the blog "Invisible Paris" goes quite some way to explain why Baron Haussmann made the decisions he did about which buildings to raze to the ground and which to preserve.