Many modern furniture fans would not have known the name Roentgen, had it not been for New York's Metropolitan Museum of Art. 60 gorgeous examples of Roentgens luxury furniture were lent from Eur­opean collections, and were complemented by paintings that depicted these master-pieces in contemporary interiors. And shown at the Extravagant Inventions – The Princely Furniture of the Roentgens exhibition at the Metropolitan (Oct 2012-Jan 2013). I recommend and thank the Extravagant Inventions catalogue, written by Wolfram Koeppe and published by Yale University Press in 2012.

German Abraham Roentgen (1711–1793) was born in Mülheim am Rhein where he learned cabinet-making from his father. When he finished his apprenticeship, young Abraham travelled to Den Haag, Rotterdam and Amsterdam, then London, learning from famous Dutch and English cabinet makers until 1738.


Back in Germany Abraham became one of Eur­ope’s most famous furniture makers, noted for his special marquetry work and for his dazzling mechanical fittings. Abraham’s most famous writing desk, made in the 1758-62 era for Count Walderdorff, displayed pictorial marquetry of pastoral landscapes and intricate architectural interiors with ingenious concealed drawers. The desk’s hidden drawers include a secret niche in the tabernacle for religious treasures, and a foldout prayer stool. 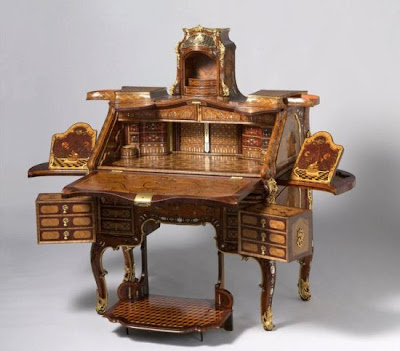 Writing desk by Abraham Roentgen
with all the concealed sections opened.

Abraham’s son David Roentgen (1743-1807) learned his trade in his father's work­shop. When Abraham retired in 1772, son David took over the business and established his own reputation. There were two in­n­ovations that came with the younger generation – firstly David opened up the partnership to the clockmaker Peter Kintzing (1745–1816). Second­ly tastes changed with time – whereas Abraham had worked in the more complex late baroque taste, son David found neo-classicism to be back in favour.

David’s neo-classicism was well timed. Noone loved this German cabinet-maker more than Marie-Antoinette (French queen 1774-92). A record of his first appearance in France was August 1774, and as Paris was in any case the style centre of Europe, the queen quickly appointed him her ébéniste mechanicien i.e making furniture in which mechanical devices played a great part. And in time the Roen­­t­gens worked for many other wealthy and noble clients, including Cath­erine the Great of Russia (Empress from 1762-96), King Louis XVI of France (ruled from 1774-92) and King Frederick William II of Prus­sia (King from 1786 on). 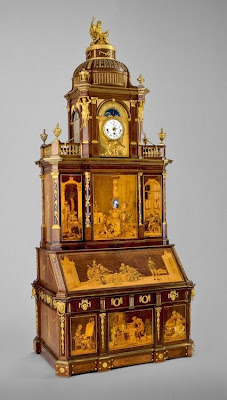 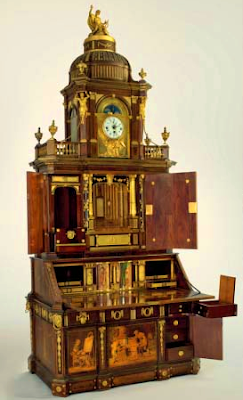 Berlin secretary cabinet and clock, by David Roentgen
1778-9
Normally in the Kunstgewerbemuseum, Berlin

Examine the Berlin secretary cabinet, made in 1778-9. A writing cabinet crowned with a chiming clock, it featured finely designed marquetry panels and el­ab­orate mechanisms that seemed to open doors and drawers automatically. Owned by King Frederick William II, the Berlin cabinet was noted for its ornate decoration, mechanical complexity and monumentality. Clearly the Roentgens’ super crafts­manship and innovative designs, combined with intriguing mechanical devices, greatly impacted on late C18th furniture.

Roentgen Jnr travelled about Europe accompanied by furniture vans, servicing his shops in Berlin and Saint Petersburg, and visiting his aristocratic customers in various countries. But the French Revol­ut­ion ruined the career of all luxury good makers in France. In 1793 the Revolutionary government, regarded him as an émigré and seized the contents of his showrooms and his personal belongings. After that date, he may not have visited Paris again. In any case, he closed his workshops because of war; prosperity never returned and David Roentgen died in 1807.

You won't believe what I have scheduled for Friday. I will edit it to add a link to your post.

Hello Hels, These look like the spiritual ancestors of the famous Wooton desks of the 19th century, with their many compartments and mechanisms.

The Roentgen pieces, while marvels of workmanship, seem overly-elaborate to my taste, and I am not sure whether they are actually beautiful. I need to get hold of a catalog to make up my mind about this furniture.
--Jim

Dr Roentgen was a major name in the field of radiology. In some languages, that field of medicine is known as Roentgenology.

Dear Hels,
A very interesting post. I had not heard of this furniture maker but I like both examples that yo have shown.
I read that examples of his work can be seen at the V&A in London. I will be there in mid February and I intend to make sure that I see these and report back to you!
Kirk

That is a excellent blog to read. Nice designs are available at yappee at the best
Furniture packages.

sometimes I blow my own mind with unexpected links to other blogs.

Timing is everything of course. But even then, this week there was a post on pregnancy in Western art in Alberti's Window. I had been reading about exactly the same topic in Vermeer's paintings back in 2008!! We made the link very easily.

wayyy too fussy and overly elaborate for our modern eyes, yes.

But in the 18th century I am guessing that wealthy people couldn't get enough of the special marquetry work and unique mechanical fittings. And if royalty rushed to buy such furniture, you can bet the nobility and international traders would not be far behind.

Wilhelm Roentgen (born 1845) was a German physicist who described electromagnetic radiation aka X-rays. This brilliant man thoroughly earned the Nobel Prize in Physics in 1901.

Wouldn't it be cool if David Roentgen (died 1807) was from the same German family.

I would love to be there!

The V & A has a number of fine pieces by the Roentgens. But seek out a table that allows the owner to choose to play cards or to use as a writing desk. When the writing surface is open, the owner has access to a hidden group of pop up drawers. It was made in Germany in the late 1750s by Abraham Roentgen.

thank you. The history of the decorative arts, furniture in particular, continues to fascinate.

Furnitures gives a great look when it is decorated in a house or office. Now a days modern, contemporary furniture available in the market.
High End Italian Furniture Miami By Anima Domus

I agree. Nowadays modern, contemporary furniture is easily available in the marketplace. But not when the Roentgens were around. Then every special piece had to be designed and commissioned for the individual, wealthy patron.

An interesting history to go with Andrews video. The workmanship was amazing for that time and until today.

I love the timing :)

Sometimes we need to step back from the idea that anything our generation makes is the most modern, cleverest, most elegant thing EVER created. In fact the Roentgens were far cleverer, I believe.

definitely buy the Metropolitan's catalogue called Extravagant Inventions – The Princely Furniture of the Roentgens. It displays and analyses some 60 superb pieces of Roentgen furniture.

I have an 18th century table, which I purchased in Paris, that was, they said, made by Abraham roentgen. How can I find out if that is true

how clever were you, if it turns out that your table was indeed by Abraham Roentgen :)

First read the catalogue called "Extravagant Inventions – The Princely Furniture of the Roentgens exhibition at the Metropolitan". That will give you some great clues to the specialist marquetry, gilt-bronze mounts, hidden drawers and mechanical devices. And the approximate dates, say 1750-80.

Then ring Sotheby's, Christie's etc in your city and ask who would be the finest Roentgen scholar. You may have to send lots of photos off to him/her first.

Dear Helen, just now catching up with your site. Firstly please accept my condolences
on your Mother's passing.
The item on wine coolers made me think of this (and related clips on the side bar) and
I wondered if you had seen them. Staggering.
All best wishes, Neil.

no, I hadn't seen them. Staggering is a great word!

I've been digging into the history of their outstanding craftmanship as of late, and I'm beyond amazed with the mechanisms used to work the secret compartments!
Does anyone here know of any literature or plans that actually go into detail to recreate them? I've been searching high and low for 6 months or so.

I hope someone reads your question and answers in this Comment Section. But usually designers covered their secrets with patents and other legal protection of intellectual property.

So let us live in hope :) Sometimes blogs are a great source of otherwise difficult to locate information.

Thank you for responding! I know this thread hasn't been active in a long time, but I appreciate it.
I had a feeling that would probably be the circumstances.
Such a sad thing though! Hopefully not lost in history, but if so, at least the pieces still exist 😊