Who made the first moving film in the 1890s?

Who created the first film? I must thank Brian Manley who acknowledged many innovators. In Moving Pictures: The History of Early Cinema he wrote that Louis Aimé Le Prince (1841-1890), a French photo­grapher and inventor who had studied under Daguerre, had turned to the idea of motion pictures. Le Prince had constructed two receivers, each with a single lens and a take-up spool for paper negatives. These paper negatives were exposed in his father-in-law’s garden and at Leeds Bridge in Britain in 1888, creating the earliest motion picture footage ever shot.

The 1888-1894 period became an explosive race to create and, most importantly to some, to capture the patents for motion picture cameras and viewers. With the industrial revolution touching everyone's life, entrepreneurs and inventors worked on machinery for motion photography. As inventions increased and devel­opments were made, inventors fought to ensure their ideas and labour were not copied without compensation. While various versions of proj­ectors and cameras were patented quickly, it was the American Thomas Edison (1847-1931) who attempted to patent the basic mechanism of movie camera, leading to years of legal struggles that often forced his competitors out of business.

As soon as the motion picture camera and early versions of the proj­ector were invented and patented in 1891, the film industry exploded with new ideas and leapt forward. Edison worked fast to stay ahead of his competitors, and in April 1894, the first Kinetoscope Parlour was opened in Broadway, corner 27th St in New York. The Kinetoscope was arranged in two rows of five with a brass rail around for customers to lean on. 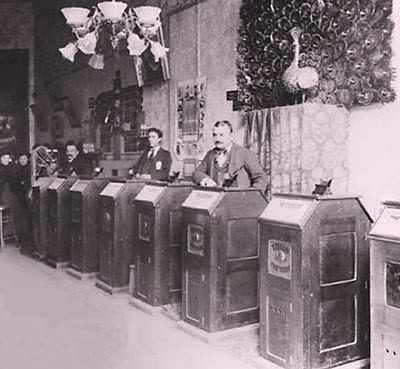 It was France that earned the credit of showing the first large-screen projected films, led by brothers Auguste (1862-1954) and Louis Lumière (1864–1948). The Lumières held their first private screening of projected moving images in 1895 at Paris' Salon Indien du Grand Café. This history-making presentation featured 10 short films, including their first film “Workers Leaving the Lumière Factory”. Each film that went through the projector was 17 metres long and ran for 50 seconds. The Lumière Brothers’ landmark depiction of a train hurtling toward and past the camera in 1895 was very significant. Their films were an important part of a series of simultaneous art­istic and technol­ogical breakthroughs that flourished at the end of the 19th century.

In May 1895, the first moving picture ever to be shown on a screen to a paying audience was shown in New York, in the shop-front of 135 Broadway. The movie was a four-minute film of a boxing match between the American Battling Charles Barnett and a heroic Australian boxer from Sydney called Young Griffo, filmed on the roof of Madison Square Garden by Woodville Latham. American film makers quickly realised that comedy, action, sports and provocative images would sell tickets. They clearly understood that film parlours, or peep shows, were never expected to be the last word in high class entertainment. 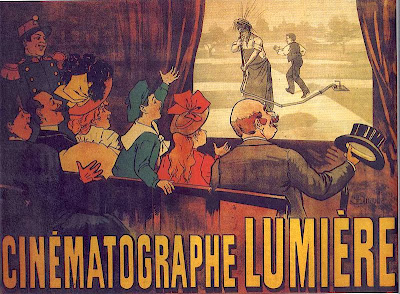 The world’s oldest purpose-built and complete cinema, Eden Theatre in the Provencal town of La Ciotat near Marseilles, was recently classified as a historic monument. The first private film screening was held by the Frères Lumière in 1899 and consisted of short films, including one of a train arriving at the station in La Ciotat. The cinema was shut in 1989 and started to look derelict but it has recently been very carefully renovated. The opening was perfectly timed – as part of the celebrations for Marseilles’ year as Europe’s Capital of Culture in October 2013. Of particular interest for this post, Eden Theatre will now be a cinema museum, dedicated to the early history of film-making.

As the Lumières began opening theatres in New York, Brussels, London and France, early filmgoers flocked, and by the late 1890s, the short actualities/films of everyday events by the Lumière Brothers were a part of popular culture. Within a couple of years, the Lumières had created 2,000+ experimental films.

As the powers of the industry shifted, the content and direction of films continued to evolve. The newcomer who created one of the big­gest excitements in the earliest wave of movies was the French magic­ian Georges Méliès (1861-1938), who was influenced by the early work of Edison’s director William Dickson and the films of the Lumières. Méliès loved the 1895 Edison film The Execution of Mary, Queen of Scots, directed by Alfred Clark, who had taken over Dickson’s role at Edison’s Co.

Despite his innovations, Méliès still approached filmmaking as a play, so his films remained thoroughly theatrical and stage-based. Most films leading up to 1900 reflected the turn-of-the-century fascin­at­ion with transportation and travel, spawning countless train films. 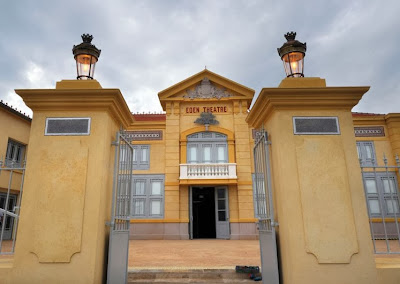 
The collection of London's Cinema Museum, which opened in 1986, grew far beyond its origins as an enthusiast’s treasure trove in Aberdeen. The Cinema Museum houses a collection of artefacts, memorabilia and equipment that preserves the history and grandeur of cinema from the 1890s on.

Since its opening in 1988, Museum of the Moving Image has been recognised as a major, internationally renowned institution and the only museum in the USA dedicated to exploring the art, history and technology of the moving image. The Museum occupies one of the thirteen New York buildings that comprised the former Astoria Studio complex. As Paramount made this their East Coast production facility in 1920, the studio was the site of hundreds of silent and early sound era film productions.

Hello Hels, A while ago, Lumière Bros. celebrated their 100th anniversary by restoring a number of their early films, including a whole presentation of their 1890s shorts, including the factory and train ones you mention. I saw this in a theater, with I believe a live narration, but I think the whole program is available on DVD. These very short films were often both riveting and affecting. I wonder how the emotions of modern viewers watching these movies differ from the original audiences witnessing something brand new in the 1890s.

When we looked at the history of cinema in class, I had been very proud of the Australian film industry. We made some great films over the years. Have a happy 2014 at the movies Helen.

all roads lead to Ballarat and we had 'The Britannia was situated in the old theatre of the Mechanics Hall (originally built in 1861). Moving pictures were screened in the Mechanics Institue as early as 1897'.

wishing you a most excellent 2014.

One has to be either very well connected or very lucky to have seen the restored early films. Seeing it on DVD could not, I think, replicate the excitement you would have felt in the theatre.

From all I have heard, the first 1890s audiences were very involved with the action, as it appeared on the screen. They yelled out in real anxiety, as the train hurtled towards them.

The early history of Australian films was pretty impressive, wasn't it. But I haven't heard about any complete film being made in this country before 1900.

That is amazing. I have poked my nose in a lot of Mechanics Halls over the years, in person and in this blog. They are institutions that never cease to amaze me with their varied educational goals, target markets and architecture.

But I have never heard of a theatre in a Mechanics Hall, in the 1890s or after. But why not? I am in Ballarat every year and will have a good look around The Britannia myself. Many thanks.

Gosh, I hadn't even heard of the Cinema Museum before. I must make an effort to visit it. I've always loved the name Lumière - what a perfect name for what they did.

I am grateful to the blogasphere for leads to topics I am zlready interested in, but don't know much about. The three museums involved with the history of cinema came from other bloggers.. I love them dearly :)

Hels please don't come to the Rat without letting me know. The Mechanics Institute is worth a Google search. Ballarat had all the gold money when it was built and now the magnificent restoration is complete (you just have to be here on a weekday to get in). The Salvos in Ballarat were big on film and had a production Lumiere Studio in their Bourke St Melb HQ before 1900
plus music store founder
"Henry Sutton from Ballarat proposes the construction of a device that will transmit moving pictures. London’s Telegraphic Journal and Electrical Review 1890 published his design for a machine he named the Telephane. It appears to have not been built, but its principles of capturing images through a lens and scanning disc, converting them to electrical signals through the action of selenium and transmitting via telegraph wires to a receiving device closely prefigured the later examples of mechanical television devised by John Logie Baird and others in the early 20th century.

I hope all this Australian history, equipment and documentation is being kept in a specialist collection somewhere. London's Cinema Museum and the others are excellent, but we need to reflect our own cinematic progress.