Egon Kisch (1885–1948) was a Jewish Czech whose first language was German. Like all the young men of his generation, he had served in the Austro-Hungarian Army during WWI. If he wasn’t a modernist and a radical before the war, his experiences as a soldier certainly radicalised his thinking during and after the war.

Then he became a journalist based in Berlin, a writer of popular travel books and a public speaker on Weimar politics.

Naturally Kisch was a fierce opponent of Adolf Hitler's 3rd Reich, as soon as the Nazis came to power in January 1933. Following the Reichstag fire in February 1933, Kisch and all the anti-Fascists in Berlin were arrested. And naturally his books were promptly banned in Germany, because he was an intellectual, Jewish, pro-worker, anti-Nazi and thought to be a Bolshevik as well.

His plan to travel to Melbourne was an interesting one. 1934 was 100 years after Victoria became a separate Australian colony, so organisers of the 1934 Centenary Celebrations were conflicted. Were citizens of Victoria supposed to be white, British, Christian, anti-migrants and neutral on German fascism? Or were we tolerant, modernist and open as a haven for refugees desperate to start a new, safe life?

The Movement Against War and Fascism wanted to organise a conference in Melbourne, timed to coincide with the official Royal Tour of the Centenary Celebrations. An International speaker was sought from the World Committee Against War, and Egon Kisch was the obvious choice. He was the author “whose writing sat­irising the Hitler regime caused him to be sent to prison camps for political prisoners”. He would speak on conditions in Germany during his two-week tour of Victoria in November 1934. 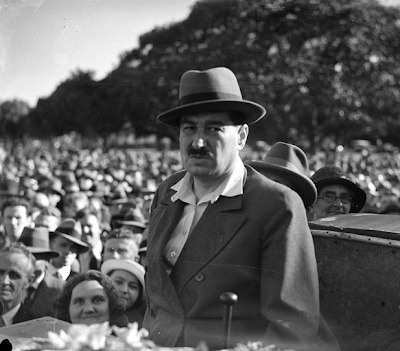 
Victoria's Police Commissioner almost fainted when he heard about the invitation to Kisch and notified the Federal Government that left-wing Jewish rabble rousers were not welcome here. The federal Minister for the Interior then formally excluded Kisch under the old Immigration Restriction Act. When Kisch’s ship arrived in Fremantle, Federal Government officers told Kisch he was "undesirable as an inhabitant of, or visitor to, the Commonwealth". Kisch had to stay locked up on board the Strathaird in Fremantle and Adelaide, during the ship’s days in port.

A week later, large groups of democrats, workers and peace supporters were on the docks  in Melbourne. This time the big guns were wheeled out and the Attorney-General (later prime minister) Robert Menzies prosecuted the Federal Government's case against Kisch. Once again Kisch was locked aboard the Strathaird during its days in Melbourne’s port. In desperation Kisch jumped over five metres from the ship down onto the pier below, smashing his leg into little pieces. Police offices carried Kisch and his broken limb onto a stretcher, reboard­ed the Strathaird and locked him up in the ship once again. Anti-Fascists and democrats in Federal Parliament booed the behaviour of both the Federal Government and the state police. 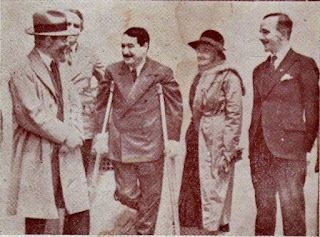 When the Strathaird travelled on to Sydney, supporters of Kisch took his case before High Court Justice Evatt, who found that the Federal Government had incorrectly excluded Kisch from Australia. Kisch could leave his maritime prison and was free to visit and give speeches. He was cared for by writers and artists Max Meldrum, Vance Palmer, Katherine Prichard and Gerald Griffin (see photo).

But the right wingers in Parliament could still undo an order issued by the High Court Justices. The Strathaird arrived in Sydney and the Federal Government now attempted to exclude Kisch using the Immig­rat­ion Restriction Act via the outrageous "Dictation Test". This was prim­ar­ily used for barring non-whites from entering Australia under the White Australia Policy, but was also available for other trouble makers. Since Kisch spoke fluent English, German, Czech, Hungarian and French, they had no idea which European  language they could give him the dictation test in. So one genius asked Kisch to write the Lord's Prayer in Gaelic. He naturally failed and was gaoled for a while in Sydney.

The Movement Against War and Fascism organised a Kisch reception committee  in NSW. This group formed the Writers League, and called on Kisch to address them and the general public. The same people planned and booked concerts featuring music from Europeans and Aboriginal artists, always with opposition to Fascism as their theme.

Egon Kisch's barristers again took his case to the full bench of the High Court, which once again ordered that he could visit and speak publicly in Australia. So the Australian Prime Minister Joseph Lyons demanded a second declaration under the Immigration Restriction Act. In January 1935 a Sydney court found that Kisch was a prohibited immigrant and sentenced him to three months in gaol. Not long after, the High Court intervened and freed him again. 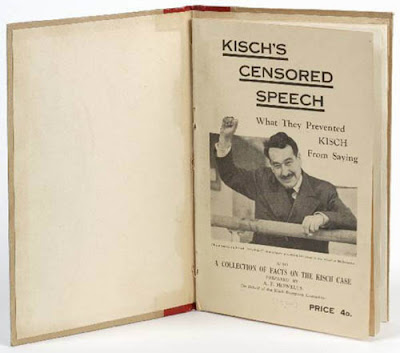 Kisch attracted enormous crowds of people at his speeches, wherever he discussed his understanding of, and experience of the Nazi regime. He travelled widely and successfully up and down the three eastern states. The Federal government could do no more to stop his speeches and offered, rather desperately, a string of promises: to remit Kisch's gaol sentence, stop all legal proceedings and pay Kisch a large sum of money IF he left Australian shores in March 1935. Kisch said thank you very much and left.

The disgusting Dictation Test was eventually abolished after WW2 but the truly disgusting White Australia Policy was not abolished until the early 1970s.

Several years later Attorney-General (and later prime minister) Rob­ert Menzies visited Germany in August 1938, as part of the Australian govern­ment’s anti-socialism, neutral-on-Fascism policies. Menzies spent several weeks in Nazi Germany and loved everything he saw. On returning to Australia, Menzies clearly and regularly expressed favourable views of Hitler and the Nazi regime. At the same time that the Attorney-General was basking in Nazi hospitality, Kisch was in Spain (1937 and 1938). Democrats and radicals from around the world wanted to save the Republicans against Franco’s Fascists in the Spanish Civil War.

Little Darwin blogs very well about the impact of this rather dismal affair on Australian politics and culture. A number of books, written at the time or written since, are cited eg Julian Smith's 1936 book, On the Pacific Front: the Adventures of Egon Kisch in Australia.

Hello Hels, Coming from you, the appellation of "greatest hero" for Egon Kisch means quite a lot. His treatment in Australia was truly despicable, leading me to look up his story in Wikipedia. It turns out that in 1939, when he fled to New York he was also initially denied entry (although not so dramatically as in Australia), and then given only a transit visa so that he could get to Mexico, where he waited out the war. (On his return to Prague, he once again had trouble obtaining a visa.)

Kisch's treatment shows how slowly the lessons of humanity are learned. When we see how the supposedly free and fair countries acted, it is less astounding how the Nazis gained such quick control and did such incredible damage.

the question we have to ask is why were right wing governments so afraid? Why would they mount three High Court challenges, just to block ideas?

Kisch was neither a soldier nor a politician; he was a writer and speaker who organised nothing. The best we can say is that he inspired Australia’s best writers writers, including Vance and Nettie Palmer, to band together in what became the Writers League – very important for the history of literature but hardly putting our government at risk.

Interesting. Thank you for sharing.

it is such a bizarre story, I might not have believed it was true. Why would the future prime minister of the nation risk being humiliated in the high court time after time, to pursue a vicious political game that he could never win?

If Kisch had been allowed to speak at the conferences he was booked for, he would have been in and out of Melbourne within a fortnight!

I was examining the enormous resources the FBI expended in pursuing the Algerian writer Albert Camus and the French writer Jean-Paul Sartre. The FBI decided that philosophers were, by definition, dangerous animals to be tracked at any cost. Plus Camus was a member of the anti-Nazi underground in France during the war... a definite threat to Hoover.

So then I thought I should have a look at the FBI's activities in relation to Egon Kisch. If you are interested, start the reading with “Egon Erwin Kisch: the raging reporter” by Harold Segel, 1997.

Giving a language test in Gaelic no less! How bizarre.
Those in authority must have been either incredibly cynical or blind to the ridiculousness of what they were doing.
And to think that the language dictation test was only abolished in 1958.

Before WW2, the Immigration people in Australia were instructed to allocate visas only to British (as well as Dutch and Swedish) citizens. By 1946 immigrants were actively recruited from Italy, Greece and Yugoslavia, but always the Immigration Department retained the ability to reject "undesirables". Undesirables included people of colour, sick people, socialists, criminals.

Rather than say to visa applicants that they were rejected because of their skin colour or politics, the dictation test was a polite way to refuse people who couldn't write in Finnish or Bulgarian. It was a disgrace!

How very interesting. And yes, quite disgusting how he was treated.

It's interesting what you wrote about the white Australia policy. I recently watched Utopia and would be interested in hearing about your views on that.

The White Australia Policy was immoral, but since Kisch was white, the Immigration people had to find a totally different way to keep him out.

One aspect of this story is particularly alarming. The more Kisch wanted to warn Australia about the Nazi government in Germany and its concentration camps in 1934-5, the more the right wing government of Australia wanted to keep him out.