Judy Cassab: from Hungary to Australia to the world

There are two connections to the artist Judy Cassab that I want to explore. The first is a review of a book that I wrote, published in the Australian Jewish Historical Society Journal of Nov 2006. It is presented here in full. The second is the major exhibition Judy Cassab, A Celebration commencing this week at the Eva Breuer Art Gallery in Sydney. The same exhibition will travel to Mossgreen Gallery in Melbourne in March 2014.

There are two ways of understanding the contribution a painter has made to art history. One could directly examine the painter’s works. Alternatively one could read about everything that the painter has ever done, from birth on, to make sense of her art.

Brenda Niall was an academic in Monash’s English Dept and must have thought herself very fortunate choosing Judy Cassab as a subject. Since her earliest adolescent years, Cassab kept a daily diary which has been translated into English and published (Random House 1996).

Judy Kaszab was born in Vienna in 1920. In 1929 the Kaszab family returned to their native Hungary where her pa­rents separated and so the youngster spent her childhood living with extended family. She eventually attended art classes at the Academy of Art in Prague and while still a teenager, married Jansci Kampfner. Niall captured the uncertainties of Jewish life in pre-war Europe beaut­ifully: the fam­ily ties, poverty, labour camps, mounting anti Semitism. Once the war broke out, Judy survived the most extraordinary circumstances as an art student in Budapest and as a working artist. It seems inevitable to even the most casual reader of Holocaust history that Cassab’s adult life and work would be affected by starvation, hiding in cellars and surviving bombs. As would Cassab’s identity as a Jew.

Cassab’s sons were born in Hungary, where she was able to paint in peace and safety. But in 1949 the family again came to grief, this time at the hands of the Communists. The time for migrat­ion to Australia had come. Niall spent the rest of the book (Chapters 6-15) dis­cuss­ing the ship journey, early adaptation to Anglo Saxon society, Cassab’s trips, and her maturity as an Australian citizen and artist. 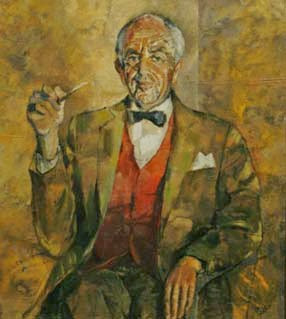 Her career flourished quickly. 3 paintings were accepted for the 1952 exhibition of the Society of Artists. A solo exhibit­ion at Macquarie Galleries in 1955 was even more significant. The name Cassab appeared briefly in Sydney newspapers and on ABC arts radio programmes. Yet the sometimes depressed Hungarian refugee had to rely on her ties with other European immigrants for company and support.

Amazingly, these contacts were her passport into the domains of the wealthy. She became best known as a portrait painter and won import­ant prizes in this genre, including the biggest prize of all, the Archibald Prize. Twice (in the 1960s)! Her growing reputation as a portraitist meant that her works were being hung in public buildings. The list of people who sat for Cassab would read like a Who’s Who of Australian talent eg Dame Leonie Kramer. I particularly enjoyed the sensitive images of Stanislaus Rapotec, Margo Lewers, Paul Haefliger which were printed in this book. What a shame there were not more.

Yet Paul Haefliger believed that Cassab’s talent for the figurative, com­bined with her urge to please as a portraitist, would self destruct. Cassab herself had no impulse towards abstract art. And her landscapes gave her little pleasure.

Niall suggested that it was the colours and shapes of the Australian desert that changed Cassab’s life as an artist. Unfortunately there were only a few examples of her new art style reprinted in the book. And another thing. Paintings should be distributed throughout the book, inserted into the relevant text. This may increase the print­ing costs, but in art history, surely text should not dominate images.

Cassab was made a trustee of the Art Gallery of NSW in 1980, only the second woman artist ever chosen. This was an impressive achievement for an artist who had faced anti Semitism, sexism and poverty for half her life. 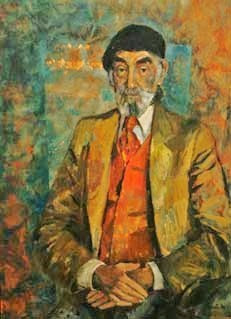 The idea for the Judy Cassab, A Celebration exhibition came from Cassab’s son who wanted the artist to be celebrated, while she was still fit enough to enjoy it. And there was plenty to celebrate. The first miracle occurred when Cassab had survived the war by assuming her Catholic maid’s identity. After many years of hard­ship and loss, in 1951, there was a second miracle. Judy, Jancsi and their two sons were allowed to emigrate to Australia. The third miracle was when her first professional art exhibition was mounted at Macquarie Galleries in 1953. 2013 is the 60th anniversary of that event.

Other galleries and institutions are lending their Cassab paintings to the Cassab exhibition, including the National Library, the National Portrait Gallery and the Art Gallery of NSW. I can only hope that Cassab’s two Archibald prize winning portraits, of Stanislaus Rapotec (1961) and of Margo Lewers (1967), are on display.

There have also been many overseas exhibitions. A regular exhibitor in Paris and London, Cassab later had a three-city tour of her work, first in her native Budapest, then in Berlin and Dublin. Then her work was shown in Brussels as part of the commemoration of Hungary joining the European Union. Not a bad life for an artist now 93.


Judy Cassab: a Portrait was written by Brenda Niall and published by Allen and Unwin, Sydney in 2005.


Judy Cassab: Artists and Friends by Lou Klepac presented a series of portraits painted by Judy Cassab of artists and friends. Published by Beagle Press in 1988, it developed into a book from a proposal for a bicentenary exhibition, and included passages from the artist's extensive diaries.

Dear Hels,
I am new to your blog and I must say that I really enjoyed this post. I had not heard of Judy Cassab but your article provides a vignette that makes me want to find out more.
I see that three of her works are held in the NGV so next time I am in Melbourne I may well toddle over to take a look!
Bye for now,
Kirk

I remember the portrait of Kramer. I think I may have printed a copy and thrown darts at it. Well, it was pre home printer days, so I am exaggerating.

Cassab is a very interesting person.

The best single site for a Sydney sider like Cassab is certainly the Art Gallery of NSW. They have her oils and drawings, including the two Archibald winning portraits.

talking of personal connections to her work, I find I have two of my own :)

Firstly my husband Joe was in the same year as Cassab's son throughout high school. The Czech and Hungarian speaking parents helped each other out in parent-teacher meetings.

Secondly I lived next to Joe Brown's sister until I was married. Although he was still in the John Brown Sock Co. then, I was invited to see his booming art collection at home. This Joseph Brown Collection was later donated to the NGV.

Ok, I am very impressed. I never knew Joseph Brown was connected to the sock company.

I was interviewed today about my connection to the NGV and discussed the role Uncle Joe (as I called him) in awakening my interest in making art and in collecting art. If it wasn't for this blog post, I may not have even remembered my adolescent experiences.

There was a nice tribute to Judy on ABC 730NSW last Friday night. It is probably up for viewing on Iview.

perfect timing! I think the ABC might not have discussed Cassab's work on Friday, had the exhibition not opened in Sydney this week. And also you might not have remembered the ABC's tribute, had we not been talking about her in the blogs.

I am reading Judy Cassab Diaries (Random House Australia) where the artist tells her own story in her own words - huge and inspirational. Being a Sydneysider of a certain age myself, I knew every important person Cassab mentioned in the diaries.

Thank you. It must have been a very exciting time for the family to have lived safely in Australia, after the turmoil in Europe. I can imagine a busy young mother, not an English-speaker, having success with the 1952 exhibition of the Society of Artists and the Macquarie Galleries in 1955. And the famous people who sat for her, leading to two Archibald Prizes!!

does anyone know how Judy came to Australia and why please comment back asap i have an english presentation on her tomorrow!!!!help me

Judy Cassab and her parents struggled for years in Fascist Vienna, Budapest and Prague, most of her relatives dying in the Holocaust. Even when she married and had children in peaceful post-war Hungary, life fell apart again when the Communists took over.

Moving again _within_ Europe was no !onger possible. Only a remote country like Australia would allow the family to live in peace.