For the Soul of France: Culture Wars in the Age of Dreyfus by Frederick Brown (published by Knopf in 2010) discussed the aftermath of the 1870–71 Franco-Prussian War. This was when a defeated and humiliated France split into cultural factions that ranged from those who embraced modernity to those who championed the reinvig­oration of throne and church. This polarisation in­tensified with a success­ion of debacles in the late C19th: the crash of an investment bank founded to advance Catholic inter­ests; the bitter fights over the Eiffel Tower; the failure of the Panama Canal Company and finally the fraudulent charge of treason brought against a senior army officer, Alfred Dreyfus. The Dreyfus Affair was in fact the culmination of two decades of conflict between modernism and conservatism, leading to something that resembled civil war between Dreyfus’ distressed supporters and fanatical antagonists. 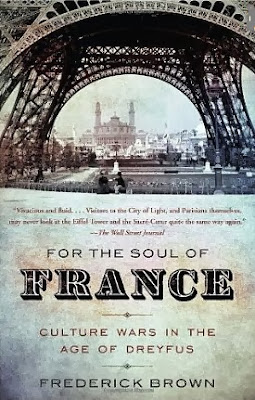 Because each of Brown’s chapters stands alone, I will review just the chapter on The Panama Scandal. Diplomat Ferdinand de Lesseps (1805–1894) convened an international congress in Paris in 1879 to study the digging of a canal across the Central American isthmus. The French delegates at the conference resolved that a canal be built in Panama, rather than Nicaragua, and that it be modelled on the Suez Canal which had organised and opened by de Lesseps just a decade before (November 1869).

Despite the fact that the French congress had been totally split on how to construct the canal, within a year they had raised enough money, in a stock offering, to launch the colossal operation. Engin­eer Gustav Eiffel (1832–1923) and the technical committee knew that Panama’s geology was not understood. But de Lesseps’ grandiosity made him a gifted prom­oter. He reassured shareholders that progress would quickly be made, insisting that 65 ks of rock, with a deep bay at either end, could not resist the newest French tech­nology. The canal would be open in 1888. 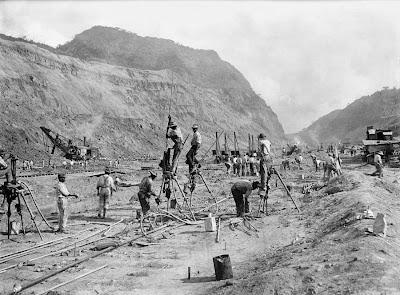 Labourers on the Canal during the 1880s
Photo credit: Viva Tropical

The ground breaking ceremony was held in Panama, in de Lesseps’ presence, on 1/1/1880. Then two years were spent trying to: recruit a huge workforce of French and West Indian labourers, locate mach­inery, prepare surveys and build splendid homes for the company directors. When digging began in Jan 1882, deaffor­est­ation led to landslides, tracks disappearing into trenches, dead workers and withdrawal of the general contractors. Along with malaria cases, there were c27,000 labourers and engineers killed by 1889, but no hospital beds were funded by the French company.

The second and main concern was always financial. There were six bond issues in 1882-88, totalling a mind-blowing 781 mill­ion francs. But only 40% of this amount of money went into the dig­ging. Enormous salaries were paid to directors. Financial journals in France received huge payments before each bond issue, presumably to ensure good publicity for the project. Parl­iam­entarians and ministers were taking cuts at every decision-making point. 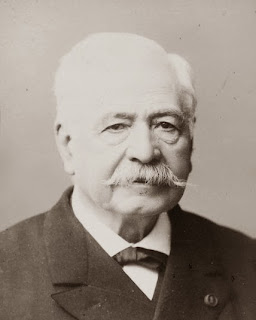 When the canal was clearly failing, various American companies made take-over offers but the offers seemed too small. So Gustave Eiffel was at last invited to design ten giant locks capable of raising vessels about the flood line of the Rio Chagres. But Eiffel arrived too late. By that time, attention shifted from the pestilential swamp of Panama to the financial morass in Paris. de Lesseps required another bond issue and five major newspapers, on the canal company payroll, exuded optimism. Financiers lobbied for the canal.

The public were smarter than the bankers – only a third of the lat­est bonds issued were sold. Six months later the Panama Canal Co. was no more. In February the civil court of the Seine ordered the company liqu­idated, followed by trials that exposed a viper’s nest. At the Panama Canal Co. Liquidation Court Trial in Paris in 1892-93, 510 members of parliament were charged with receiving bribery from the Panama Canal Co. to withhold information about the company's hopeless finances from the public. de Lesseps, his son and Eiffel were also charged. Baron Reinach, the Canal Company’s financial adviser, was charged but committed suicide before the trial. Other defendants got out of France as soon as they could. 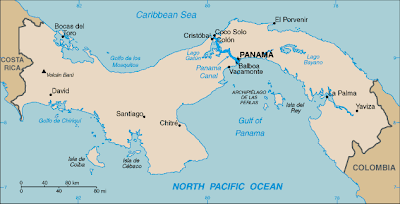 Location of the canal across Panama

The hundreds of Christian bankers, administrators, newspaper owners, individual financiers and politicians, and two Jewish financial ad­visors, were totally exposed. Tens of thousands of citizens had been ruined in the crash and had lost their life savings. They wanted blood.

The Dirty Linen of Panama was a series of articles written by Ferdinand Martin on the front page of La Libre parole, the newspaper Edouard Drumont launched in April 1892. It was ugly, it was rabidly anti-Semitic and it helped rede­fine France’s views of the “Panama Canal Scandal” into a “Jewish Disaster”. It might have been the largest monetary corrupt­ion scandal of the C19th! And Tribunals and invest­igative committees might pass judge­ment on one French culprit or another. But, declared La Libre parole, no matter: Jews were behind it all. The Jew was the puppet master.

So by the time Emile Zola’s open letter J'accuse was published six years later (Jan 1898) in the same new­spaper L'Aurore regarding the Dreyfus disaster, the damage had already been done to France’s Jewish community.

Frederick Brown’s story ends in 1892. But the Panama Canal story did not. An American engineering body was commis­sioned to study the canal in 1893 and recommended a sea-level canal, as had Ferdinand de Lesseps back in the late 1870s. But more modern American engineers recommended a canal using a lock system to raise and lower ships from a large reservoir 26 m above sea level, as had Gustave Eiffel. The lock people won. The construction of the canal was formally taken over by the USA which bought the lease and the shares in a 1903 treaty, for USA $40 million. Work resumed in 1904 and the canal finally opened August 1914. 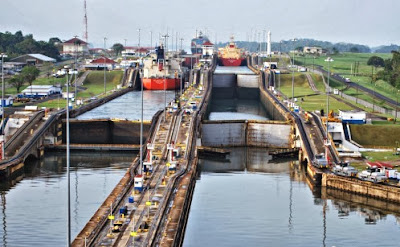 The Panama Canal today, including the locks

It really was a wonder that the canal was built. The terrible death toll is a shocking indictment of the times.

There were four young businessmen from Panama in the Hong Kong tour last year. They were the first citizens I have met from that country.

The death toll is extraordinary. Surely that figure wasn't kept out of the newspapers at the time?

Even if you credit the French with the best motives in the world for opening up the Panama isthmus... to save shipping the long trek around the Americas... it was poorly prepared. Team de Lesseps engineers had no idea of what they were going to find, once they crossed the ocean. Team Eiffel might have, but by then it was far too late.

Panama became independent of Spain in 1821 and joined a union of Nueva Granada, Ecuador and Venezuela, as part of Colombia. The nation didn't become independent of Colombia until 1903 (note the date!) and even now the population is only 3.5 million. So you won't meet many Panamanians *nod*

the owners of the important and influential French newspapers were paid huge bribes to speak highly of the Panama Canal project. So they did!

What amazes me is that even if the Panama Canal Co and its directors didn't give a toss about the labourers dying, why didn't they care about all their very special engineers who were dying at the same, tragic rate?

Hello Hels, Impressive as is the achievement of the Panama Canal, it somehow comes as no surprise that it went along with such monumental greed and bungling. So many international troubles, as well as civic and business enterprises tell the same story.

When I was in America, I don't recall meeting any Panamanians, but I have run into quite a few in Taiwan--the two countries get along quite well.

I knew very little about the Panama Canal in particular, but I certainly did understand the political and social values of France from 1870 - 1900.

So the question we have to ask is: Is a background of conflict, polarisation, humiliation and disappointment enough to explain the emerging culture of personal greed, corruption and bribery? The court trials in the 1890s were interesting but they did not answer our key question.

Wow, such a fascinating post. This paragraph reminded me so much of the bitter fighting we see today in the States: "The Dreyfus Affair was in fact the culmination of two decades of conflict between modernism and conservatism, leading to something that resembled civil war between Dreyfus’ distressed supporters and fanatical antagonists". It seems there will always be a strong, conservative, religious movement.

This post is so interesting first because of the mind-blowing corruption but also on how it was then blamed on Jewish people. If we ever wondered how the criminal indifference of Vel d'Hiv came about, we only have to remember that this crisis occurred just one or two generations before WWII.

Interesting, isn't it? I understand how devastated the French government and population must have felt in the decades following the 1870–71 Franco-Prussian War, how impotent France was in the face of two years of devastation.

But I don't understand how the despicable Edouard Drumont launched his newspaper La Libre parole AND was so influential. It suggests that French anti-Semitism was already thriving pre-1892 and the Panama Canal Scandal and the Dreyfus Scandal were to some extent inevitable. Let alone WW2!

The American leadership under Theodore Roosevelt moved with utter ruthlessness to make the canal a reality. They bought out the French company for $40m, a figure that dwarfs the purchases of Louisiana, Alaska and the Philippines. When the Colombian government seemed unwilling to give in to the American demands that they concede total control over a canal zone, Roosevelt made plans to invade Panama, but instead fomented, supported and protected a separatist revolution on the isthmus. He then bullied the new Panama republic into signing a treaty that reduced it to vassalage and established total military control of the new canal zone.

There was a sharp backlash in the US, where the president was accused of dragging the country down to the sordid level of the European land-grabbing powers, but it was a fait accompli and a watershed for US presidential power and American imperial ambition.

I suppose after decades of French deaths, soaring costs and lack of success, the Americans had to be ruthless! Nonetheless it is a nasty story.

Thanks for this post. I read it this morning before our lecture today on the Panama Canal Scandal in France.