Piguenit and the Australian landscape

William Charles Piguenit (1836-1914) might have had a grim life in Australia since he was born in Hobart Town to a convict-father who had been transported to the Tasmanian penal colony. Instead, young William was fortunate that his mother valued education. She set up a school for middle class girls where she taught the most important subjects - French, music and drawing.

William lived and was educated in Hobart, and spent 22 years working in the Dep­artment of Lands survey office as a draught­sman. The only formal connections he had to art were a] lessons from a Scottish painter living in Hobart and b] doing lithographic illustrations as part of the survey work.

In 1872 Piguenit resigned from his career as a public servant in the Survey Office to devote himself to landscape painting - he began making sketching and photography trips to remote mountainous regions in inland Tasmania. For a largely self-taught artist, Pig­uenit started to exhibit his works in the annual Sydney and Melbourne academy shows. But giving up his day job was a brave thing to do, even for an unmarried man - he didn't sell many of his paintings until 1887 when the government bought six of his works on the western highlands, now in the Hobart Art Gallery.

Piguenit’s impressive work Mount Olympus, Lake St Clair, Tasmania, source of the Derwent (69 x 107cm) was one of many pieces in which he painted the state’s natural landscape. His romantic goal was to evoke the sublime majesty through a combin­at­ion of earth, water and sky writ large, and human activity writ small. [Actually I mention Mount Olympus because it was the first work by an Australian-born artist to be acq­uir­ed, in 1875, by the Art Gallery of NSW. Not because I loved it the most].

Walk to the West was a book published in 1993 by The Royal Society of Tasman­ia to celebrate the walk to the West Coast of Tasmania under­taken by William Piguenit, James Backhouse Walker and others. They left Hobart in 1887. The book was based on the diary by Walker, with careful explanations of Tasmania’s conditions and environment. The text was interspersed with plates from Piguenit's paintings, made along the trip. And a map provided information of the West Coast landscape in the 1880s. 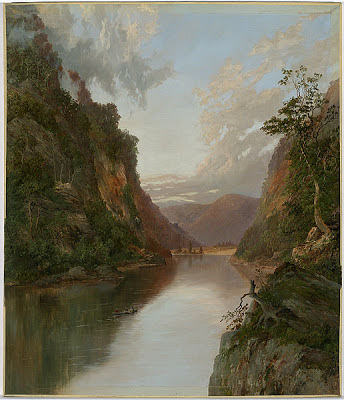 
In 1889 Piguenit joined an artists and photographers camp in the Grose Valley in the Blue Mountains. And the very next year Piguenit was living in Sydney. Continued patronage by the Gallery in Sydney enabled him to tour NSW and Tasmania, providing fresh inspir­ation for his grand, sweeping landscapes. The Flood in the Darling 1890 (see lower photo) was one of the enormous works painted by Piguenit when heavy rains half flooded inland New South Wales that year. Like any good Rom­an­t­ic artist, Piguenit loved comb­ining the destructive yet sublime powers of nature. This artist could have depicted the loss of animals, human life and rural architecture, yet he chose the post-storm calm. He depicted the vast expanse of sky, land and water as a celebration of the natural world and its elements.

I'm perfectly aware that not every art historian thought that Piguenit had a very important place in Australian art of the later 19th century. Christopher Allen  believed that while the paintings were apparently about vastness, distance and sublime grandeur, they were in fact completely flat. They had no depth, no space and no rigour. Allen thought this criticism was even more evident when comparing Piguenit to his Heidelberg School contemporaries in Melbourne.

But did the Heidelbergers make Piguenit look old fashioned and provincial, largely because of the older man’s lack of formal education in art composition? I think not. If we had to reject paintings because of a lack of rigour, half the religious, historical and portrait paintings of the last 2000 years would be gone. In any case, Piguenit starred in two important elements: his magic silvery light and his glassy bodies of water.

Despite being in his 60s, Piguenit continued his successful career into the C20th. In 1898 and 1900 he visited Europe, exhibiting at London & Paris. Back home he won Australia’s most prestigious landscape award, the 1901 Wynne Prize, for Thunder Storm on the Darling. Then he was commissioned by the National Gallery of New South Wales trustees to paint Mount Kosciusko 1903 (179 x 262 cm). This was a majestic depiction of the continent’s tallest mountain. It was a perfect symbol for the importance of Australia’s Federation, just two years earlier. He died in 1914. 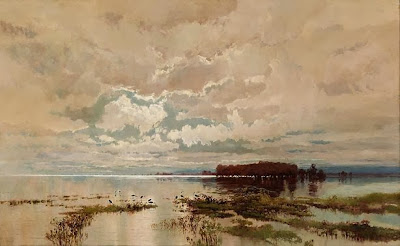 And it is well worth viewing the Catalogue Raisonne published by Tony Brown in December 2012 for the Tasmanian Museum and Art Gallery of Hobart.

The Hawkesbury River painting is very nice. After visiting our National Gallery in Canberra, I have a better appreciation of Australian painters.

I agree with Andrew. If I remember correctly, Charles Conder, Julian Ashton and half the Sydney Art School used to camp in the Hawkesbury River.

I think that is true - that we always tended to under-appreciate our own artists. People were always so dazzled by what was painted in Britain, France, Italy, Germany... anywhere but here.

Yes indeed. During the late 19th century, Richmond, the Blue Mountains and the Hawkesbury River were much loved by by en plein-air artists. It was probably Arthur Streeton immortalised the river in his work.

Great write up and wonderful post. I love to read your post very much. A big thanks for sharing with us !!

Thank you. Have you visited either the Art Gallery of Hobart or the National Gallery of NSW?

Thanks for this Hels.
Piguenit is under appreciated. He was a great painter of mist.

Many thanks. I really liked the Piguenit that you chose for your post i.e Kosciusko. It is monumental, green and rocky.

Do you know where that painting can be seen?
http://landscapesoftheself.blogspot.com.au/2010/11/wc-piguenit.html

Hi Hels.
Luckily for me it's in the collection of the Art Gallery of NSW. So it's only a 20 minute drive away.

Here's a link to the item in their online catalogue:
http://www.artgallery.nsw.gov.au/collection/works/577/

The colours look quite different from the image I posted. Reproductions vary quite a lot. Will have to go and see it in the flesh, to see which photo is closest.

Thank you. My husband grew up in Sydney, so we are always visiting for family, university or conference business. I will certainly revisit the Art Gallery of NSW with a new agenda next time.

Reproductions are always a problem, with every artist. But since I love Piguenit most for his his silvery skies and glassy waters, I will never be disappointed with the image you selected.

Professor John Maynard is a Worimi man from the Newcastle/Port Stephens region. His new book is a study on Lycett's paintings of the life of Aboriginal peoples within the vicinity of Newcastle and Sydney, between 1816 and 1832.

It is difficult enough finding records of early Australian art. Finding a book about Aboriginal responses to European artists (convict or otherwise) is even more precious.