Edwin Lutyens was invited by India’s colonial masters to lay out the central administrative area of New Delhi in the 1920s and 1930s. All of the important public buildings (old Viceroy's House, the King's Way linking up with India Gate, Connaught Place and the official home of the national President, the Secretariat Building for governmental ministries, Parliament House, large churches) were carefully planned between sweeping roads and green parkland.

Pre-Partition, New Delhi looked wonderful and was well accepted. But would another pre-planned European-style garden city with low rise buildings be welcomed, AFTER India gained independence from Britain? I was not sure.

With the partition of the sub­continent in 1947, the previous capital of the Punjab (Lahore) now found itself within Pakistan; thus the new East Punjab in India had no capital. After the trauma of partition, Jawaharlal Nehru, India’s first Prime Minister, believed a new capital city could be built in optimism and modernity. 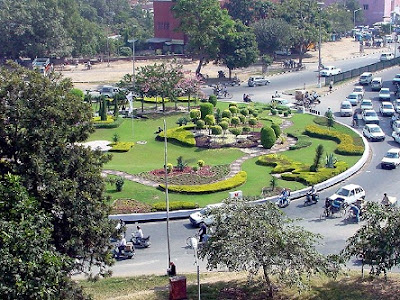 Roads designed to smooth the flow of Chandigarh's traffic

To select a suitable site, a Committee assessed the existing Punjabi towns for redev­el­opment, but all were unsuitable. The present site of Chandigarh was selected in 1948, partially because of its location in centre of the state and its wonderful location in the Himalayas foothills. Fortunately the new city would be only 240 kms north of New Delhi.


The American company of Albert Mayer was commissioned in 1950 to prepare the master plan that would have cluster housing, self–contained neighbour­hoods, curvilin­ear roads, markets and central­ly located open spaces. Then the work was given to European architects led by Le Corbusier (1887–1965) in 1951. Le Corbusier’s master plan included the Capital Complex and the main buildings for government employees, schools, shopping centres, hospitals and a university. A rectangular grid pattern was introduced to speed up the traffic.

Le Corbusier’s master plan was to be realised in sections, depending on the city's population and its future growth rate. Each neigh­bour­hood would be self-sufficient, having shops, school, health centres, centres of worship and recreational facilities. The shops would be located along the major shopping street that would extend from one neighbourhood to the next. Green parks would stretch across the entire city; a lake and reflecting pools would further soften the feel of the city. 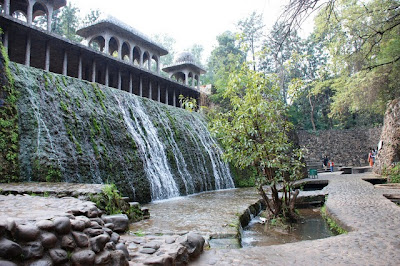 Thus Chandigarh became the first, pre-planned, garden city in post-Partition India.  Since then The Beautiful City, as it is called, has become the seat of three governments, gaining in land, population and political importance. The trend towards population growth was particularly noticeable throughout the 1960s, so the land allocated to each family had to be reduced in size. Despite an initial promise not to have high rise buildings, the administ­rat­ion eventually had no choice; they had to provide multi-storeyed flats and other medium density housing alternatives for 1 million residents. Nonetheless it has been clever urban planning and a clean break from Britain’s colonial rule.

The Market Square concept was introduced for the first time and the facades had more glass in place of old fashioned local materials. The area set aside for commercial activities grew, with special emphasis on service indus­tries such as hotels, banks, private nursing homes and shopping centres.
And like Lutyens in New Delhi, Le Corbusier placed his signature build­ings in the centre of Chandigarh. The Capitol Complex has the Secretariat for government offices, the Parliament building and the High Court.

Le Corbusier's contribution is still celebrated in a number of important ways today. The Le Corbusier Centre tells the history of the city in photos, exhibits and models. And consider the Chandigarh Architecture Museum. Then visit New York’s Museum of Modern Art exhib­ition "Le Corbusier: An Atlas of Modern Landscapes" (June-Sep 2013). He had proposed plans for many cities, beginning in Paris in the 1920s, that were never taken up. So Chandigarh was the crowning achievement of his professional life. 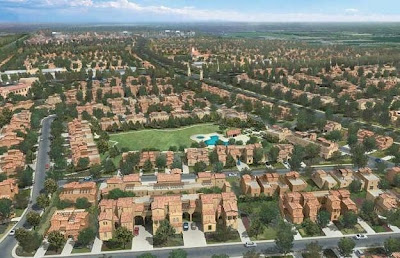 One element was not thought of until after Le Corbusier retired and was only inaugurated as a public space in 1976. The Rock Garden of Chandigarh has winding pathways, ponds, waterfalls and rather special sculptural displays made of old ceramic pieces.

Now that's interesting. I remember seeing photos of Chandigarh taken in the mid to late 1950's which were in the Religious Archives where I used to work, having been taken by Missionary photographers (our 'mission' in the Punjab then being to support the indigenous Indian Church). But I never knew the great Le Corbusier himself had had a major hand in planning this wonderful city.

When we were examining the Garden City Movement in lectures, I remember Britain, Australia, Israel, the USA and other places, but I don't remember India. Interesting and different.

At least you had seen all the photos. I spent plenty of time looking at town planning in New Delhi yet no guide said why don't we all go to Chandigarh :(

that is so true. Probably because the first planned cities came soon after 1900 eg in UK: Letchworth, Welwyn Garden City and Hampstead. Even Tel Aviv's and New Delhi's plans were largely completed in the late 1920s-early 1930s.

Chandigarh's master plan was not set out until the 1950s!

They really did not see the impending setting sun with all the work that went on New Delhi in 20s and 30s.

Another fascinating post about a place I knew nothing about.

I presume you meant the _British_ did not see the impending setting sun (that had previously never set).

It is an interesting question. Would the British spend squillions on a country that was going to peacefully declare Independence soon? Would it matter that the country was India, jewel in the British crown?

I don't suppose we will know for certain, but did the Indians love/admire Lutyen's and Le Corbusier's plans?

Open Democracy compares Lutyens in New Delhi (1912-31) with Le Corbusier in Chandigarh (1951-59). Lutyens studied existing Indian traditions, and did his best to respect what they said about climate, social expectations and lifestyle. The result was an architecture that was noble, peaceful and functional, which was admired by the locals. Indians did’t see Lutyens' work as a symbol of imperial domination.

Although Le Corbusier’s polemics chimed perfectly with the aims of British town planners after the 1947 Act, his inability to design public space went hand-in-hand with his modernist arrogance. At Chandigarh he showed an insolent disregard for the traditions, social order and climate of India. He eliminated the shadow-filled alley ways, narrow streets and traditional inward-looking houses. He made no provision for traditional activities such as bazaars, travelling vendors and open-air entertainment.

But was Open Democracy correct? I don’t know of old slum housing in Chandigarh that was demolished instead of being restored; nor am I familiar with modernist high tower blocks being erected.

Thanks for your blog. If anyone want to know about political related company, this will be the rightplace for you.
Political Agency
political campaign management companies in india