When my parents moved into a care-home earlier this year, they asked me to: take the art work from their walls, take the music and books from their bookshelves and sell everything else. I recognised all their paintings and drawings, except for their beloved Noel Coun­ih­ans.

Noel Counihan (1913–86) was born in this city, Melbourne. He event­ually studied part-time under Charles Wheeler at Melbourne’s famous National Gallery of Victoria Art School in the early 1930s, where he met social realist artists for the first time. In the middle of the world’s worst depression, what a joy that must have been. Social realism, the belief that art should reflect the realities of society under capitalism, could not have suited young Counihan better.

While still in his teens, Counihan joined the Communist Party, helped found the Workers Art Guild, created artistic banners and began printmaking, producing linocuts and lithographs for the party’s magazines and pamphlets.

He wanted to be known as a pencil portrait­ist and press cartoonist. I presume it was because these were the very media that enabled him to create art that had a social purpose and could be used to expose social inequalities. Pastels, water colours and even oils might have been too soft and not gritty enough to depict people living in the slums.

During the Great Depression Counihan participated in the Free Speech fights in Brunswick, organised by the Communist Party in response to a Victorian state government law banning subversive gatherings. Doz­ens of members of the Unemployed Workers Movement were arrested, and unemployed meetings in Sydney Road Brunswick were broken up by the police. Counihan, artist and brawler on behalf of the starving unemployed, became the stuff of legends.

In the 1930s Counihan worked as a cartoonist for famous and not so famous pub­lic­ations, including The Bulletin and the Communist Party's paper, the Guardian. 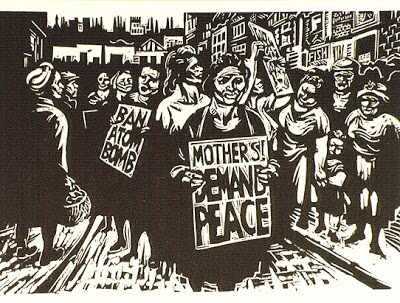 Even during the terrible war years, it was another social realist artist, Yosl Bergner, who encouraged and cajoled Counihan to continue. And to paint, rather than draw! A founder and member of the Contemporary Art Society in 1938, Coun­ih­an initiated its very successful anti-Fascist exhibition that was held in Melbourne right in the middle of the war, 1942. His work The New Order, one of the few paintings that he preserved from the show, was influenced by one of the American social realist artist William Gropper. And also influenced by the drab colours, sagging figures and ill fitted clothing as painted by Yosl Bergner.

The Anti-Fascist Art Exhibition had works from artists who all saw their work as having an important social and political role in documenting the suffering of the oppressed. Some young artists participated in the exhibition after they became friends with Noel Counihan and other social realist painters and writers. They clearly shared Bergner’s social conscience.

Canberra's National Gallery described the New Order thus: He believed that art should have a social mission and that it could be used as a tool to expose political corruption, the hypocrisy of the church and the inequal­ities in society. The faceless Nazi soldiers are shown from behind, as anonymous symbols of oppression. They are symbols for all military oppressors. The victims, an elderly bearded peasant who has been shot and a decapitated woman, are symbolic of the civilian human sacrifice throughout the ages. Counihan’s comment has a timeless and universal significance

Later Counihan helped organise an Artists' Unity Congress, receiving awards for his paintings of miners in the Australia at War exhibition in 1945. In 1946 he, Bergner and Victor O’Connor exhibited at the Myer Art Gallery. They were the three realist artists who were restating their social realist position and their unhappiness with their friends in the Contemporary Art Society.

Towards the end of the 1940s the artist travelled to the United Kingdom and across Europe. Counihan continued working in the 1950s and 1960s, but radicalism largely ended in this country with the Vietnam War. Or perhaps Counihan was simply becoming a bit older and a bit better behaved. 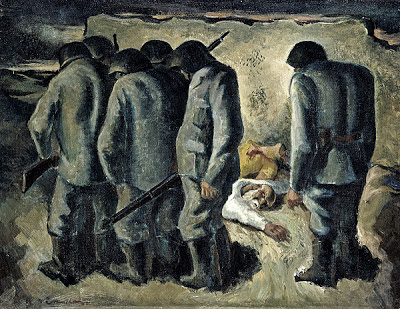 The Counihan Gallery in Melbourne aims to promote and inspire innovation and diversity in the visual arts through its annual program of exhibitions. It also endeavours to encourage discussion and debate about new ideas and issues in contemporary art and culture. I am delighted the Gallery was named in honour of my Australian artist and activist Noel Counihan, but it didn't open until 1999. Since Counihan's most important contributions to art were in the 1930s and 1940s, this seems a very long wait.

Coincidentally the blog Black Mark has discussed special exhibitions at the Counihan Gallery just recently. I recommend his posts.

"to expose political corruption, the hypocrisy of the church and the inequal­ities in society". I am glad we sorted that in the subsequent half a century plus.

This is one that sounds well worth visiting.

Novelists, poets and artists were often the most progressive of people in the past. Remember the First World War poets we looked at in lectures? Not now.

Exactly. In tough times, capitalists always exploited the workers and underemployed workers!! If workers were becoming more desperate during the Great Depression and then World War Two, all a boss had to do was to threaten to sack his staff. Not only would the staff be threatened with poverty themselves, but their wives and children would be too.

Our grandfathers used to tell stories of bosses giving their workers full salaries during the Depression, then taking away a percentage of the cash in their pay packet just as they were about to leave the factory's front gate.

I wonder if, in today's sluggish economy, capitalists can still exploit the labour force like that.

Yes, I do remember. Writers and artists lived quite precariously. If their parents were financially supportive, the young artists could write or paint as honestly as they wanted. But if artists and writers had to live off their own creative works, they had to be very mindful of public opinion, of the police, of curators and publishers.

I suppose activists were always in the minority, but throughout Australian history we have always had a progressive minority who took to the streets to right injustices to workers, aboriginal communities, immigrants, the environment etc etc. Even when I was at uni in the 1966-70 era, it was very exciting to participate in protests, sit ins etc.