Discovering World War One records for the first time in 2011.

Every historian in the universe wants to discover a treasure trove of written texts, photographs or objects that has never been seen before. Most historians never manage it.

The small French village of Vignacourt is north of Paris, near Amiens. Dur­ing WW1, this village was behind the front lines, a short march from the frontlines against the German army. It soon became a casualty clearing station/recreation area for passing war traffic. Allied troops moved up to, and then back from the battlefields on the Somme, via Vignacourt.


In 1916 farmer Louis Thuillier had returned to Vignacourt after two years of military service in the French army when Australian soldiers began arriving in the town. The Australian forces were pouring into the Western Front from the disastrous Dardanelles campaign in Gal­lip­oli. Thuillier and his wife Antoinette were an enterprising and car­ing couple who saw an opportunity to make some income for themselves; they offered passing soldiers photographs of themselves. They depicted British and British Empire soldiers and French civilians, particularly Australians. 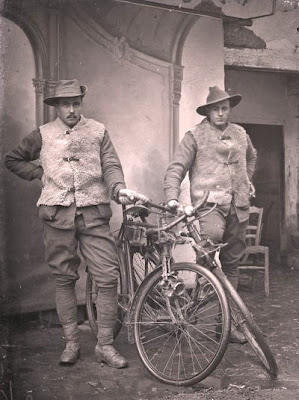 Two diggers, enjoying some recreational riding, before returning to the front line.

Capt­­ured on 4,000 glass-plate negatives, printed into postcards and posted home, the photo­graphs made by the Thuilliers enabled Austral­ian soldiers to maintain a link with their families at home. The Louis and Antoinette Thuil­lier collection covered many of the signif­icant aspects of Australian in­volvement on the Western Front, from military life to the bonds formed between the soldiers and civilians.

The photographers' notes suggest that many of the photos were taken of Aust­ralian soldiers, from the 1st and 5th Division, in late 1916. Thus the boys had recently survived the carnage of battles at Pozieres and Fromelles. At Pozieres alone, in just four days, 5,285 Australian soldiers were killed or wounded.

If people DID know about the photographic collection during the 1914-18 war, they forgot about it after the armistice. Only one person mentioned the photos in the decades since 1919; a French amateur historian, Laurent Mirouze, had seen part of the collection over twenty years ago. Apparently his attempts to see the plates preserved and protected two decades ago were ignored by the British and Australian authorities in France.

Anyhow this amazing war record was recently found by a Sunday Night team in France. After following up rumours of a secret stash, the team found 3,000+ fragile photographic glass plate negatives in the attic of a dilapidated Vignacourt farmhouse that had once belonged to the Thuillers.

The Australian War Memorial in Canberra was fortunate enough to be given 74 of the original glass-plate negatives; these in turn were made into hand-printed photographs in Canberra. The resulting exhibition is called Remember Me: The Lost Diggers of Vignacourt. They are candid, informal portraits of allied soldiers enjoying time in the village, young men who had recently survived the carnage of battles on the Somme and Flanders. The soldiers were often billeted with local families and some of the pictures show local children and French teenage girls posing with the diggers. I am assuming the photos were informal and a bit larrikin because Australian soldiers at rest don't feel comfortable in formally posed military positions.

The curator noted “Nearly two-thirds of the young men who came through Vignacourt would have gone on to be killed or wounded. The losses were appalling. In all likelihood these images are the last photographs taken of many of these young men before they died. They are a character study of men under stress and in relaxation but men who are experiencing the war and coming back to areas where they can let off steam a little bit. They know they’ve got to back up the line”. 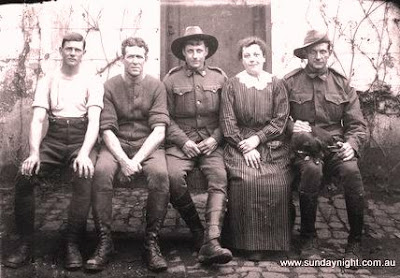 British censorship on the western front meant that few such informal photographs exist outside the official record. As I had noted in an earlier post, Australia did not have its own official war photographers until 1917. The Thuillier collection fills a hole in the historical record.

The Channel 7 show, The Lost Diggers, secured some of the plates from a Thuil­lier relative. When she heard of the great interest in the history of the plates, she donated them to Australia. Gratitude to the Australians in this part of France is apparently still very strong.

The remainder of the Thuillier collection is still in those chests in France, covered with dust and in serious danger of deterioration. I could not have written about The Lost Diggers, without Channel 7’s Sunday Night programme.

The Remember Me: The Lost Diggers of Vignacourt exhibition will end at the Australian War Memorial Canberra on the 31st July 2013.

What a fantastic find!
Some great casual shots there.
Cheers, ic

I haven't seen all 4,000 images, but I _have_ seen hundreds. The soldiers look so casual and so sloppily dressed, they could only have been Australian :)

Some photos have young Fench girls/women, sitting on the soldiers' laps. We have to hope that the soldiers loved their time in Vignacourt and looked back on the locals very fondly.fioreas mean

Yes, yes, very interesting. The photos are great, but I can't help but think of a twenty year old Australian in the 19teens, living with a French family, who presumably spoke no English. That is not just a language gap, but a giant cultural chasm. How well did it work?

Hello Hels, Archival treasures like this used to end up often at universities, which had the wherewithal to preserve them and to allow scholarly access. A recent unfortunate trend is to cherry-pick the collections, selling off the most valuable components, and breaking up what was once complete. Even more disturbing is that it is sometimes the universities that are doing the selling.
--Road to Parnassus

What a wonderful legacy - let's hope the necessary conservation work can be carried out so that all of these precious images can be unveiled.

if I was a mother living on a farm in Wonthaggi in 1916, I would have just hoped and prayed that some caring family was looking out for my lad in France.

The soldiers themselves may have had other goals for their rest and recreation period behind the lines. Clean food, a bath and regularly sex come to mind :)

I thought of that very issue about the Dead Sea Scrolls. Miraculously found in remote caves by shepherds in 1946-47, half of the scrolls ended up in a fantastic public museum in Israel. And there have been endless academic and popular publications.

The other half were sold in an open market in Jordan. These might have ended up in secret university archives or they might have been pulped for wall insulation. Once the collection was broken up, its integrity was lost forever.

you are so right about conservation. I understand why glass-plate negatives would fade... but I wonder if they would break, inside their undisturbed attic crates.

They must do. Laurent Mirouze had already suggested 20+ years ago that the plates needed urgent preservation work.

Hels, regarding my Cable Station post. It was actually a station for a submarine telegraph cable between Australia and New Zealand. Although, there was a tram service to La Perouse in the early days too.

why am I not surprised that 'British and Australian authorities ignored requests to protect the 3000 slides' and we end up with only 74 when with a bit of care we could have swooped on them all.
Anything about WW1 just breaks my heart (except Blackadder, bless them). I like to think my Hamilton grandfather had fun with French village girls (remember that they all thought they were going to be killed soon), on breaks from his year-long work driving ammunition to the front of the Hindenberg Line. I have one of those photos of him and his brother together.

I don't understand why the images were NOT all saved and put into the Australian or British War Memorial collections. Not only would there be a treasure trove of WW1 history saved for a grateful nation, but modern families would be able to put a name to each of these beautiful boys.

Ahhh thanks. That makes sense.