At times Highland landlords were dead set against emigration: they wanted people for the collection of kelp, for fishing and to serve in regiments in the Napoleonic wars. It was only after 1815 that migration came to be seen as a safety valve for the Highlands and Islands, particularly after the great potato famine of 1845-56. 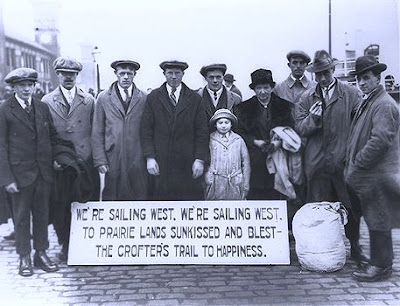 Scotland never suffered the huge mortality that hit Ireland because only 200,000 were affected by poverty and hunger, compared with three million Irish. Thanks to the efficiency of the relief effort, the number of Scottish victims had dropped to 70,000 by 1848.

But by then landlords became quite brutal.  They could see little improvement to the economy as a result of the relief works they had instigated; they calculated that the closing down of the Central Board of Management for Highland Relief would reduce the support they would have to pay to hungary families. There was much talk of "chronic Celtic Laziness", backed by dubious racial theorising and a fear that continued relief would merely perpetuate dependence. Profits made from black cattle were down, while sheep farming was up. Several large estates were virtually insolvent and the trustees running them, in far-off Edinburgh and Glasgow, were responsible in law for a rigorous adherence to the bottom line.

There was undoubtedly coercion, with the many families in rent arrears being offered a choice of a free passage or eviction from their crofts. Between 1841-61 the population of the West Coast above Ardnamurchan and the Inner and Outer Hebrides went down by a third: Lewis, North and South Uist, Barra, Tiree, Mull and Skye lost most. Destitute families didn't have many choices. 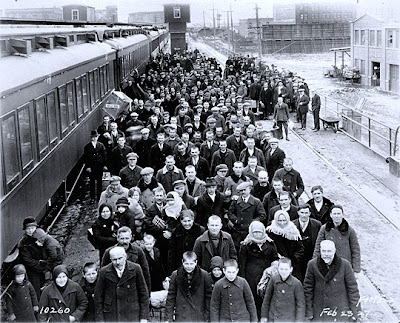 Scottish Immigrants in BC Canada, 1927. Photo: Simon Fraser U

When families were starving, it was difficult to differentiate between those who were forced to emigrate and those who left rel­at­ively voluntarily i.e looking for a decent life for their children.  But by the 1830s, some countries were actively recruiting Scots. Australia, for example, had a new policy of systematic colonisation, whereby proceeds from colonial land sales were used to subsidise passages on government chartered ships for selected emigrants, whose eligibility was deter­mined by government recruitment agents. 5,200 Scottish emigrants were recruited under the government bounty programme between 1837-40. Most of them came from the west highlands.

260 young Hebrideans set sail in 1923, in search of a new and better life. They left Stornoway harbour in the Isle of Lewis on the Canadian Pacific ship, the Metagama. Within the year 800 other young people will have left the Isle of Lewis, and many from South Uist, too. Life was tough in the Hebrides, once the brief boom following the end of WW1 was over.

The Canadian Pacific Railroad Company had actively promoted Canada as a destination for immigrants, ever since it had been allocated 25 million acres between Winnipeg and the Rockies. It needed a steady flow of Scotsmen and women to open up this vast area. Canadian agents stood on railway stations across Northern Europe, handing out fliers to potential recruits. A peak in Scot­tish immigration was reached in the 1920s, with 363,000 leaving for the US and Canada in that decade, and hundreds of thousands going to England as well.

So why are we so keen to turn ships of refugees and asylum seekers back to where they came from? Nations like Australia and Canada could easily accept hundreds of thousands of starving or oppressed refugees from Afghanistan, Iraq, Sudan or Syria! 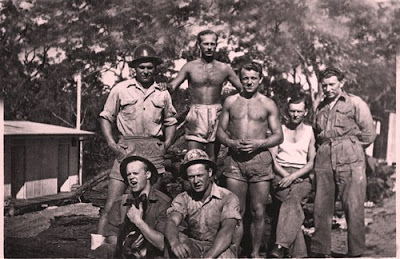 I have three possible reasons. Firstly Scottish refugees were white, Christian and hard working. We were familiar with these people, and we wanted to help them. The refugees who try to escape their homelands today are not white, not Christian and their nations had no history within the British Empire.

Secondly Australia, Canada and other recipient countries were once under-populated, developing rapidly and needed a pioneering work­force. Today these countries see themselves as overcrowded (at least in the main cities), fully developed and have no enormous infra­structure projects in process or on the drawing boards.

Australian governments enthusiastically paid the transport costs, housing and employment expenses of European settlers after WW2; in return, the new citizens worked for two years on the Snowy Mountains Scheme, Warragamba Dam or Prospect Reservoir. But those days have long gone - the Snowy Mountain Scheme finished in 1974.

Thirdly there is a question of racism. At the 1937 Evian Refugee Confer­ence in France, Australia's Minister of Trade & Customs Mr TW White noted "as we have no real racial problem, we are not desirous of importing one". The French delegate stated that France had reached the extreme point of saturation reg­arding admission of refugees, a view repeated by most other representatives. Those gentlemen were actually debating whether European Jews should be given a safe haven or not, but the level of political debate in Australia does not seem to have changed since 1937.

I think an added pressure to those you mention is internal migration in those countries, the forces that caused people to move from the country to the city, or in the U.S. from the South to the North, seeking jobs. Although this does not address the issues of fairness or emergency relief, many cities at various points in time might have felt that these added burdens precluded fresh sources of immigration--or maybe just used that as an excuse.

We took in desperate refugees and saved their lives, while at the same time boosting our own economies.

Of course I knew about emigration from Scotland, but not in the detail you describe, so thank you for that. It's interesting that the English (?) landlords' fear of Celtic idleness was not borne out by the endeavours of the Scots in their new environments. In many instances they built the countries where they settled and prospered themselves. It was just a case of playing on an even field, perhaps. It is understandable why there is still such a lingering resentment in Scotland against the English, although in reality much of British life (as in the United Kingdom), is dominated by Scots; the last Labour government is certainly a case in point. Scotland also has more beneficial healthcare and other policies.

And this seems to have clouded judgement on how effective Scotland would be as an independent nation. I fear it would be disastrous, and it is only the pipe dream of the SNP leader Salmond, who's plans for independence are largely to benefit himself/his ego.

*nod* it IS understandable why there might still be a lingering resentment in Scotland against the English. Although I might modify it a bit to the Highlands and the Islands, rather than all Scotland.

The highland clearances forced displacement of many citizens in the Scottish Highlands during the C18th; the appalling potato famine; mass evictions of mid C19th etc etc. Some moved to the Scottish lowlands, some found work in the British army, and half a million were forced into permanent immigration to the New World. I too would have been wretched. And angry at the English.

But will they ever want to become a truly independent nation again? I would have said no, but then I was wrong about Czechoslovakia and I was almost wrong about Quebec seceding from Canada.

Not just Scottish railway stations. Canadian agents stood on railway stations across Russia, Lithuania, Ukraine and goodness knows where else, handing out fliers to would be immigrants. Canada wanted hard workers and were prepared to give the migrsnts a house and a job, as long as it was in places like Winnipeg.

Hello Hels:
This puts us so much in mind of the policy of the British Government in the aftermath of the Second World War when those of what are now the former colonies, particularly places such as the West Indies, were encouraged to Britain under the slogan 'Rebuild the Motherland'. Now there is, despicably in our view, a great reluctance to admit anyone.

It is a heart breaker.

It wouldn't be the first time a colonising power established warm and mutually beneficial migration policies, trade, use of the colonised nation's natural resources etc etc. But after independence, the old colonising power often faced a different world and no longer accepted its beloved citizens of old.

Suddenly, just as you suggested, fully paid up citizens of British countries were no longer welcome in Britain. Exactly as faithful Algerian citizens who worked so hard for France, later found they weren't so welcome there.

What an interesting post Hels. I was not aware of the great waves of Scottish emigration before.

Your analysis on the aversion to refugees is an interesting one. I spend a lot of time trying to disabuse people of their stereotypes with respect to refugees in this country but the fallacies are perpetuated. I think nationality is an interesting one because my dad was a British expat in the first place. Nice how we still distinguish between immigrants and refugees.

Immigrants are people who have to leave home because of oppression or poverty, and wait for a visa in an orderly queue.

Refugees are people who have to leave home because of oppression or poverty, and jump into a small boat without waiting for a visa in an orderly queue.

You are right. What the sod is the difference?

I love that definition Hels! I might have to use it!