London was a dirty, chaotic city in the second half of the 17th century. Vauxhall was then a rural hamlet on the south bank of the Thames, and Vauxhall Gardens was merely a square plot fringed by trees. Nothing special, except that people came out of the city to breathe the fresh air, walk and amuse themselves. 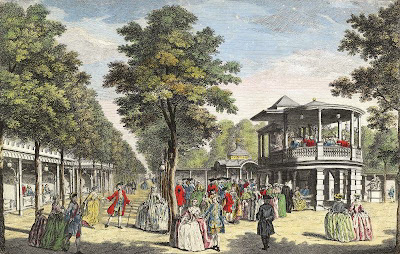 The grand walk in the centre of Vauxhall gardens

The pleasure gardens that grew up, from 1661 on, asked a fairly modest fee for admittance and entertainment. Each evening there were organised entertainments which were clean cut and fun, unlike the horrendous bear baiting and other disgusting entertainments offered in the city. However some entertainment raised well plucked eyebrows - the popularity of Vauxhall, especially its secluded paths and gardens, made it an ideal place of business for the working girls of London.

Clearly Spring Garden, as it was first called, must have been a great place for entertainment. This was where Samuel Pepys made his choice of the Ladies of the Night and where King Charles II courted his mistresses (sequent­ial­ly?). It is not hard for us to imagine enthusiastic crowds, squashing onto the river boats every summer evening, holding the shilling entrance fee in their sticky hands.

My earlier post, on pleasure gardens and the society that frequented them, started in 1729 when the young businessman Jonathan Tyers (1702-67) took over the lease to Vauxhall Gardens. He wanted his pleasure garden to become an elegant, civilised and civilising environment.

Tyers transformed what was essentially a plantation of trees into a space for performance and display, with specially designed pavilions, grottoes, sculptures and illuminated serpentine walks. Masquerades, gymnasts and magicians were impressive. Fireworks displays apparently stopping street-smart Londoners in their tracks.

The octagonal Orchestra was a building designed for the performance of music in the open air that opened in 1735. Around it in colonnades, Tyers built rows of supper-boxes where people could enjoy the music while eating and drinking. With 100,000 visitors each season, the gardens offered musicians their first mass audiences.

With Hogarth's (1697-1764) help, these green, clean pleasure gardens became egalitarian spaces where the middle classes could mix with the intelligentsia and the minor nobility. And the not-so-minor nobility; Frederick, Prince of Wales and his entourage loved going to Vauxhall.

People could enjoy in supper alcoves, decorated with contemporary paintings and sculptures. Why did Hogarth make the art choices? Because Hogarth, who was a friend of Jonathan Tyers, had recently married and moved to lodgings in South Lambeth!  Hogarth wanted to help decorate Vauxhall Gardens, giving other artists invaluable public exposure. Tyers was delighted, and in return he presented Hogarth with a lifetime pass to the gardens.

The relationship seemed to work well. David Coke (History Today, May 2012) was convinced that Tyers became one of the greatest patrons of contemporary British art and music. He argued that Vauxhall Gardens were central to the dissemination of Rococo in the public mind, at least in London. Tyers selected architecture, paintings, sculpture, furniture, tableware, lighting and music such that his gardens actively promoted the British rococo style. The artist who most benefited from Hogarth's campaign was Francis Hayman, who had four rococo paintings commissioned by Tyers for the Prince's Pavilion.

For Londoners from 1730 on, it must have seemed like stepping into an ethereal dream world, with wafting music and 20,000 glittering oil-lamps in the trees. I like the saying: music, wine and moonlight. They should have added “sex”, both paid for and free. 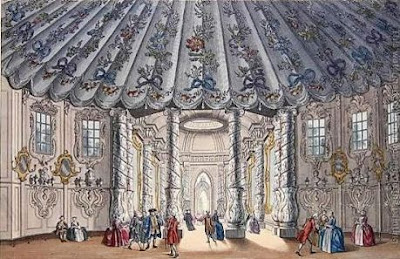 Now comes the interesting part. Hogarth understood that art was became increasingly commercialised, viewed in shop windows and taverns, and sold in printshops. New customs were emerging. So Hogarth’s idea was to paint and engrave modern moral subjects; to treat the canvases as his stage and the models as his story's characters. It must have been successful since today Hogarth is best known for his modern moral subjects, of which he sold engravings on subscription.

I understand why Hogarth would want create series of tragic and funny moralising stories, but did the sexy and glittering society who frequented the pleasure gardens give a fillip to his popular Modern Moral series? If Vauxhall, the very place Hogarth had helped make popular and successful, was one of the sources of his vigorous satirising of the manners and values of the day, it seemed strangely like biting the hand that fed him. Nonetheless the dates of these “moral lectures” were intriguing. Harlot's Progress prints appeared for the first time in 1732. The Rake's Progress prints were delayed somewhat but appeared in 1735. Marriage à la Mode appeared a few years later. 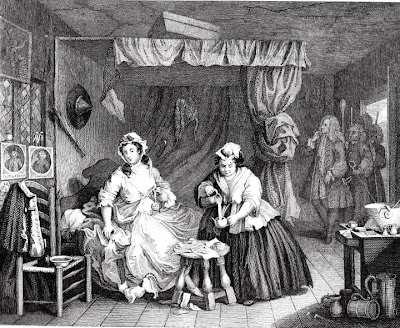 Tyer and Hogarth died almost at the same time (1767 and 1764 respectively), so their careers overlapped perfectly with the greatest decades of Vauxhall’s long existence.

The most useful reference is David Coke’s essay "Vauxhall Gardens" in Rococo: Art and Design in Hogarth's England, published by the Victoria and Albert Museum London, 1984. Also see Vauxhall Gardens: A History, written by David Coke and Alan Borg, and published by Paul Mellon Centre in 2011. The Works of William Hogarth: in a series of engravings, by John Trusler 2007, is wonderful.

I loved your lectures on Hogarth quite a while back, but I had no idea that he had any relevance to the Vauxhall Gardens. No wonder Tyers was thrilled with his friend's involvement.

Hogarth was amazing *nod*. In his own career, Hogarth saw that the modern art world was became increasingly commercialised; he was not dverse to advertising his art creations in shops and in publications.

That Hogarth would help Tyers decorate Vauxhall Gardens was great for both of them.

As far as I understand the sources, a number of pavilions and supper boxes were ornamented with paintings from designs by Francis Hayman, not by Hogarth, except for copies of "Henry the Eighth and Anne Boleyn" and "The Four Times of the Day". It is not clear whether any of these paintings were actually painted by Hogarth. When Thomas Bowles published engravings after 18 of the Vauxhall pictures in 1743/44, the originals were all attributed to Hayman. However, it is likely that Hogarth gave Tyers some ideas for the Vauxhall decorations.

Thank you! I went back to the article and added a reference to Francis' Hayman's four paintings, as I should have done in the first place.

I hope I didn't suggest that the paintings at Vauxhall were Hogarth's own works. It was Hogarth's enthusiasm, skills and connections as a modern art promoter that helped Tyers so much.

I love it when you write about London because I always learn something new and interesting. London history fascinates me! It is strange that Vauxhall seems pretty central now when compared to the sprawling area that Greater London now occupies.

It is always fascinating how morally ambiguous the upper classes were. Well, I guess you could say that continues to this day.

I love reading, writing about and teaching European history, particularly London's. Even after all these years back in Australia, I would move to London or the Home Counties in a heartbeat.

It is interesting that we (and Hogarth) find the upper classes to be morally ambiguous. When the upper classes were forced to see the working poor of 18th century London, they found them to be dirty, uneducated, shifty and morally bereft. I agree that nothing much has changed.

The blog called TWO NERDY HISTORY GIRLS has a useful post about the Vauxhall Gardens and amazing Pinterest Pages.