Treasures in the attic: a lost Adriaen Coorte painting

Scholars of Dutch history, do you know the art of Adriaen Coorte? I looked him up in my essential undergrad reference Dictionary of Art and Artists and found five skimpy lines. 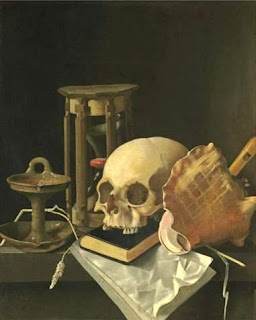 Coorte was born and trained in Middelburg, which is a beautiful, small, Dutch town but not the cultural centre of Europe. And he may well have spent a few years in Amsterdam, training under an experienced artist and teacher. But it was not going to be the Big Smoke for Coorte; in 1683 the young artist returned home to Middelburg, set up a workshop and spent the rest of his rather short life designing and painting small, beautifully crafted still lifes. Yet documentary material only exists for his membership in the Guild of St Luke in Middelburg from a later date and the taxation documents he filed. Coorte was a very shadowy character.

Since only c80 paintings have been attributed to Coorte, we have to assume that art wasn’t his only life (did he run a tavern as well? did he teach?) or that not all his paintings have been identified and catalogued. I am passionate about 17th century still life paintings from the Netherlands, but to say that Coorte’s works are understated is an understatement. They are stark! 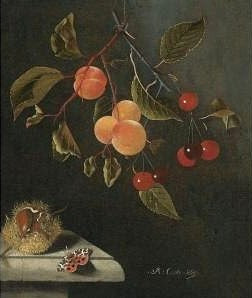 After 1683, Coorte seemed to have painted mainly small studies of slightly exotic fruit and vegetables on a plain slab of stone eg strawberries, apricots, gooseberries,  peaches and watermelon. Or rare biological specimens like coral and tropical shells. The slab of stone was constantly grey, the background was universally dark and shapeless, and any household utensils were simple and cheap.

Venetian Red examined a few Adriaen Coorte  paintings, concentrating on pictures where asparagus was a very important, or sole element in the composition.

Bonhams thought that when Coorte had a butterfly hover over the fruit, he was painting it in as a compositional device to punctuate the background and to create a balance to the fruit.  I, on the other hand, thought it might have been connected to a vanitas element. Vanitas referred to the meaninglessness of earthly life and the transient nature of vanity. The fruit being painted was sometimes less than perfect, or it may have been a bug or two hovering around. The transient nature of vanity

I have heard of artists fading into oblivion after their death, only to be rediscovered in the 20th century. In this case, it seemed to be the Dutch art historian Laurens Bol who revived Coorte's reputation - Bol published a catalogue raisonné on Coorte in 1977.

More recently, there was an exhibition at the National Gallery of Art Washington DC (2003); the next year the Rijksmuseum Amsterdam and the Mauritshuis museum in The Hague were thrilled to borrowed four still lifes by Coorte from a private collection (2004). So this was more than having his career resuscitated. He went from “Adriaen who?” to “this museum urgently needs some Coorte paintings” within a few decades. 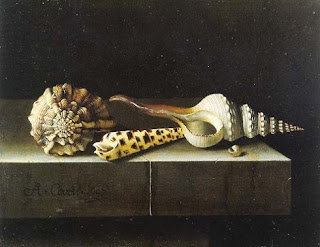 Does interest expressed by the big public galleries translate into large payments at the auctions? Vanitas with Skull and Hourglass, 1686 was sold by Sotheby’s in 2008. This may be the most crowded of Coorte’s still life paintings (above). The skull and hourglass were certainly on the stone ledge as expected and the back-ground was darkly blank as expected, but many objects were squished into the small space – oil lamp, shell, book, recorder, musical score and corn bits. It sold well.

Consider the December 2009 auction of two of Coorte’s new-found paintings, each of which sailed way over the printed price estimates, including Still Life with a Peach and Two Apricots on a Stone Ledge 1692. Or see Still Life with a Butterfly, Apricots, Cherries and a Chestnut 1685 which was sold, very well, by Sotheby’s in New York in 2011 41 by 35cm. 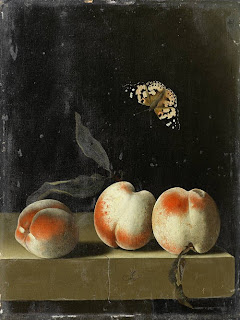 But then in December 2011, a Bonhams’ auction created an even newer record for Coorte when a previously unrecorded painting called Three Peaches on a Stone Ledge with a Painted Lady Butterfly sold for £2.1 million (Aus$3.1 million or USA $3.32 million)!!!  I don’t know the date of this tiny work (31 x 23 cm), but the mid 1690s seems about right. The painting had been found in Australia, was sent to Europe for authentication and was sold in the Old Master Paintings auction at Bonhams in London.

If I wanted to compare the simplicity and relative poverty of Coorte’s images with the lushness of other still life Dutch artists, I could do no better than Willem Claesz, a generation or two earlier. Claesz’s Still Life 1634 in the Rijksmuseum was also small, 45 x 62 cm but several gorgeous objects were arranged on the table: silver drinking bowl, green glass römer (ie a glass with a round bowl and a wide, hollow stem), a tankard and several valuable plates. 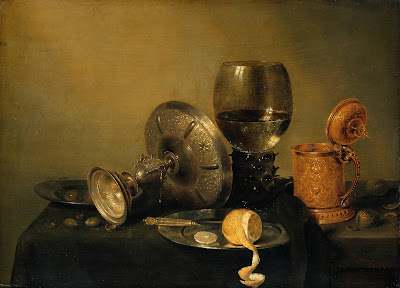 The Rijksmuseum bought the their first Coorte 100+ years ago but it didn’t seem to excite much attention at the time. Today the Rijksmuseum has 5 Coorte paintings and I presume they will be looking to buy more.

Hello Helen:
What exquisite and wonderful work. We too are great admirers of early Dutch painters and Coorte, as you show here, deserves to be much better known.

Your comment about the inclusion of a butterfly or insect is most interesting and provides for a very different interpretation of this artist's work.

I agree with what you said about Willem Claesz. Ditto Willem Kalf, Pieter Claesz, Adriaen van Utrecht and others - richer, more intense colour, more elaborate table objects than Coorte. Coorte may have been going for a different market.

I was not familiar with the C17th Dutch painters you mention, and therefore not Coorte either, but I am grateful for your introduction. The still lifes are certainly exquisite.

I hadn't heard of Coorte either. Thanks for filling me in. If only he knew how his work is admired today.

The older and hopefully more mature I become, the more I am drawn to 17th century Dutch artists. There is something so domestic and normal about them - not employing huge, religious or historical themes.

the artists you mentioned were born in the 1590s or in the early decades of the 17th century when Netherlanders were excited about their new independence from Spain and their passion for Protestantism. And money was flooding in from the overseas colonies and from trade.

I am guessing now, but perhaps by the time Coorte was painting, the Netherlands was moving into a new, less exuberant era.

You're welcome! Still lifes seem to be denigrated a bit by "real" artists because they think it is dead easy to stick some apples on a table alongside a bottle of wine, and anyone can do it. But 17th century Dutchmen seemed to be creating still life paintings that talked about their society, especially vanitas paintings.

it is strange, isn't it. A tiny work by a little known Dutch artist was found in Australia - and fetched Aus $3.1 million.

Coorte would have been gobsmacked.

I love the still life painting with Apricots, Cherries and a Chestnut, and also
Three Peaches on a Stone Ledge with a Painted Lady Butterfly. Interest expressed by the big public galleries does translate into large payments at the auctions. There are lot's of great undiscovered artist out there. Thanks for this post.

the question of undiscovered artists intrigues me because fame comes and fame goes.

I am thinking of someone like El Greco. He was famous in his lifetime; died in abject poverty; disappeared off the face of the art world for hundreds of years; was rediscovered by the Napoleonic armies who took his works back to Paris; is now worth a fortune.

I had not heard of Coorte either. The paintings you show, especially the Three Peaches, have a freshness and clarity somehow that other Dutch still lifes don't. Maybe I'm imagining it!

you aren't imagining it. There is a crispness and lack of pretension about Courte's very small paintings that is very refreshing.

Let us cross national boundaries for a moment. Compare Coorte to Antoine Watteau and Nicolas Lancret who were only 20 years younger. It is difficult to believe they were contemporaries.

Great post, Hels. The "vanitas" still life and his stark canvases may have been Coorte's way of reacting tot he immense wealth that Holland was accumulating at the time due to its trading activities.

When ostentatious wealth became de rigueur and Dutch artists went head over heels with their "Pronkstillevens" (see my post: http://nicholasjv.blogspot.com.au/2012/03/art-sunday-jan-de-heem.html ), this would have been anathema to someone who may have been quite religious - do we know anything of Coorte's religiosity or otherwise? Judging from his paintings I would place him in the dour protestant camp.

thanks for the reference.. I think you are spot on. No, I know almost nothing about Coorte's life, but I liked what the National Gallery of Art Washington had to say.

Coorte attached great virtue to the close examination of the most minute of God’s creations. Thus he conveyed a comparable poetic sensitivity in his careful, almost naive renderings of fruits, vegetables, and exotic shells. His delicate brush captured the tenderness of a young shoot or the translucency of a berry’s outer skin and the promised lushness of its inner core — but at a remove. He viewed the world with a classical restraint, simplifying and idealising forms to enable them to gain in lasting significance.

This approach to his subject matter also characterises Coorte’s treatment of vanitas scenes. Here Coorte depicted objects that reminded viewers of the transience of life and the dangers of succumbing to sensual pleasures while still painting beautiful objects, catching the light.

In all blogs, the source is referenced in the text itself, via an underlined word or phrase. So if I am quoting Bonhams, press on the underlined word Bonhams and you will find http://www.bonhams.com/auctions/19011/lot/58. If I was showing the paintings in the Rijksmuseum, press on the word Rijksmuseum and you will see their collection https://www.rijksmuseum.nl/en/search?f.principalMaker.sort=Adriaen%20Coorte&ii=0&p=1 Etc etc.

Hope this has been helpful
Hels

It hung on our loungeroom wall for decades, was never particularly admired,dad thought some other paintings were deemed valuable and took them to Sotheby’s, the 3 peaches was thrown in uncovered! as an after thought, mum has a framed copy hanging in its place

isn't that so often the case, especially if the art objects are inherited from a previous generation. Sometimes the paintings etc will be worth sod all and are only there for some fun; other times we are totally gobsmacked by having an unexpected treasure.

Only once was I bitterly disappointed. I had bought an expensive first edition book years earlier and Sotheby's said it was very interesting but not worth as much as I paid :(