Whenever I have been on literary pilgrimages, the greatest pleasure has usually been found in the private home of the Great Man or Great Woman. Libraries, museums, galleries, churches and theatres have been wonderful sources of information about literary heroes, but it was at home that the writer could be at his/her most intimate, domestic, sociable, comfortable and even idiosyncratic. It was also the place where the writer’s own taste in architecture, furniture, decorative arts and landscape gardening could be best examined.

Rudyard and Carrie Kipling moved into an impressive Jacobean home, Bateman's, near Burwash in rural East Sussex, in 1902. We know when the house was built; the date over the porch says 1634. 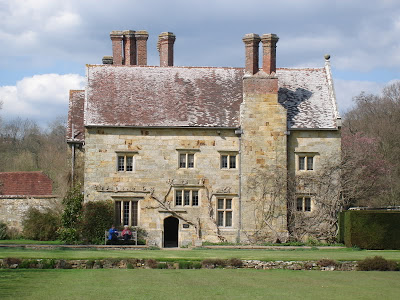 
Kipling received the Nobel Prize for Literature in 1907 and was both the first English language writer to receive a Nobel Prize and its youngest recipient ever. So we can assume that many of his important books were written inside the peaceful oak beams and mullioned windows of Bateman’s.

The book-packed study still holds all his writing paraphernalia. He was very fussy about his schedule and punctually, each morning, he went to his study to write. The Indian rugs that reminded him of his boyhood home in Mumbai are still there, along with an English walnut chair, his French walnut table, blotter, a pewter ink pot, a rather cheap pin box and a more expensive pen tray for the ink brushes. I rather expected Kipling to return from lunch at any moment, to rest and read on his oak day bed. 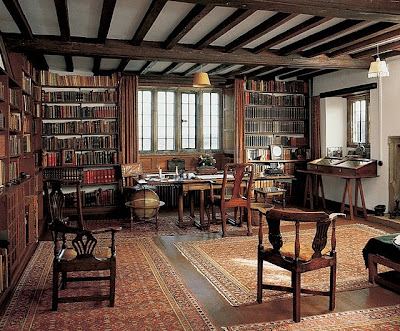 In fact there is an eastern flavour in other parts of the house as well, travel mementos from when he got his first job in India as a young journalist. There are blue and white dishes and vases, decorated boxes and Kipling's collection of miniature Indian, Chinese and Japanese deities that he called his household gods. You can see internal photos from the house in Period Property UK.  But part of the house is not exactly as the Kiplings left it. Today Rudyard and Carrie’s bedroom functions more explicitly as a house-museum, with many of the collectables that made Kipling happy, including some Admiral Nelson mementos.

When the Kiplings bought the estate in 1902, it already had 33 acres of land, a lovely river, an 18th century working mill, outbuildings, an orchard and a wild garden. The acreage was added to, as Rudyard Kipling made more money from his book sales and prize money, and the pond, rose garden and the yew hedges were all laid out according to his own design. His great pride and joy were classic cars, including a Rolls Royce Phantom I. 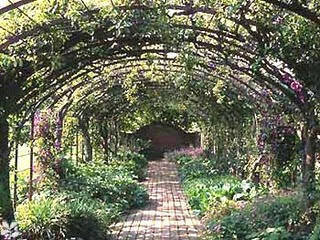 Although Kipling died in 1936, his wife lived at Bateman’s for another three years until she, too, passed away. The estate was later bequeathed to the National Trust by daughter Elsie and is now a public museum dedicated to the author. A lovely a portrait of Mrs Kipling, painted by Rudyard’s 1st cousin Sir Philip Burne-Jones (Sir Edward's son), can be seen above the main fireplace.

A Circle of Sisters: Alice Kipling, Georgiana Burne Jones, Agnes Poynter and Louisa Baldwin by Judith Flanders (published by WW Norton in 2005) is interesting, particularly on the family's connection with the Pre-Raphaelites. 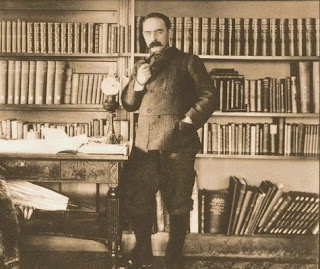 This is why I love this country so much! There are treasures all around and I never stop discovering new ones. I must add this to my to-visit list. Perhaps I should take my mum, she was fond of comparing me to Mowgli as a child.

Kipling is one of my very favorite authors. But I made the experience, when I recommend his books, many people know him only because of the Jungle Book or even worse the Disney version of it. So they think he wrote only childish stuff and that's really, really sad.

Hello Helen:
It is now many years since we lasted visited 'Bateman's'but can still recall it quite clearly. As you say, there is something special about seeing where a particular writer lived and where his/ her craft was carried out. The sense of place certainly does make one feel more of a connection with what they have written.

Monk's House where Virginia Woolf lived is a particular favourite of ours.

revisits to significant sites are a great idea. I saw many places before 1991 (when I started lecturing in history) that have benefited from a new look since 1991.

Our priorities change over time, as do our skills hopefully.

Kilping was a super writer, but if people read him with post-modernist 2012 eyes, they will miss his special contribution to turn of the century literature. We could say exactly the same about Dickens.. or Trollope.

The sense of place certainly does make a person feel more of a connection with what the author has written or the artist has painted. And nowhere is this more true than with the Bloomsbury Set. I loved Charleston Farmhouse in East Sussex for the same reason.

Hi Hels, Batemans is on our to visit list. We live quite closeby but haven't got around to it yet (still plenty of interesting places we haven't visited in Kent!).

The house and grounds could be almost anyone's dream home! Mine for sure.

The literary pilgrimage is so appealing. I've always wanted to duplicate Wordsworth and Coleridge's walking tour of the Lakes and wonder if it's even remotely possible. Many of the inns are likely gone, but I wonder if there would be motorways to scramble over or if the actual route would still work.

My mother read Kipling to us when we were children and my brothers and I visited the house the summer before last. I'd like to add that it is in the middle of "The Weald", a hilly area of Sussex and Kent, which was the model for "The Shire" in LOR.

Kent? Did I make a mistake or are you suggesting a takeover of important East Sussex sites by Kent? :)

Seriously, for a moment. Sometimes we don't pay enough attention to our own literary or architectural treasures. We are so busy getting through the working week that we can only relax and explore when away from home on holidays.

there are endless literary and art pilgrimage tour companies and university summer schools that were designed with you in mind. For one example, see "Wordsworth's Literary Lakeland" tour by Lynnot Tours - 4 days of blissful villages, homes, pubs, schools, libraries etc, of Wordsworth and others.

The advantage of an organised tour is that it can get you into places that might otherwise not be open to the general public. The advantage of planning your own itinerary is that you get to choose whether to walk or go by minibus, whether to include Beatrix Potter and John Ruskin, or not.

I like your mum instantly :) I wonder if mothers still read out loud to their toddlers.

If you think of The Weald as being the wooded area between the North and South Downs, I am amazed how often my blog posts over the years have returned to this area. To the South Downs, especially.

Just 3 days after we were thinking about literary pilgrimage, I found a book called "Freud's Couch, Scott's Buttocks, Bronte's Grave" by Simon Goldhill (Uni Chicago Press, Nov 2011). Goldhill asked why do people embark on these pilgrimages; what do they hope to learn about their hero? etc etc