The Royal Pavilion in Brighton was designed in the early C19th by John Nash for Prinny, the pleasure-loving Prince Regent who became King George IV. The palace was designed in a mixture of Orientalist architecture and decoration at its most splendid and exotic peak.

But did Edwardians realise that the Royal Pavilion had not been a royal residence since 1850? Queen Victoria loathed this lumping symbol of the dodgy Georgian ancestors whose image she distanced herself from. So in 1850 she sold the palace to Brighton council. Only the original fittings and furnishings were moved to Buckingham Palace and Osborne on the Isle of Wight, where they remain.

Secretary for War Lord Kitchener was told: "Understanding that the Royal Pavilion at Brighton is specially suited for hospital treatment of Indian troops, the Corporation beg to place it at His Majesty's disposal for that purpose". The palace had a very Indian external architecture and both Islamic and Mughal taste in the interiors. So the Brighton dignitaries thought it would be very home-like for any Indian soldiers who found themselves wounded, 7,500 ks from their families. 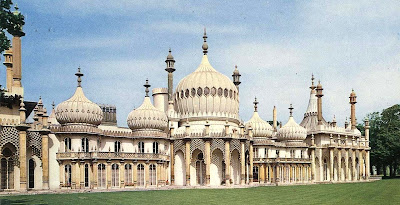 
Nonetheless it was still something of a surprise when, in Nov 1914, builders moved into the palace. Luxury carpets and curtains were removed, linoleum laid over the ballroom and stone-flagged kitchens, and 700 beds were installed under the gilded ceilings and chandeliers. Prinny’s Georgian kitchen was changed into an operating theatre.


Nine kitchens, some catering specifically for Hindu religious laws, were erected in the grounds, and enlisted men from the Indian army were quickly shown how to cook standing up at a western stove. A halal slaughterhouse was opened in town. The Sikh temple was a marquee erected in the Pavilion grounds. Muslims were able to use the lawn in front of the Dome, as this was facing East.

In early December 1914, a train bearing a large contingent of wounded Indian soldiers from the Western Front arrived at Brighton railway station from a hospital ship in Southampton. Stretcher after stretcher shifted from the train to the ambulance vans and became the first Indian patients to move in. A feature in The Herald introduced local citizens to Hinduism and its rituals, explaining how cultural understanding would grow as the hospitals became better established. 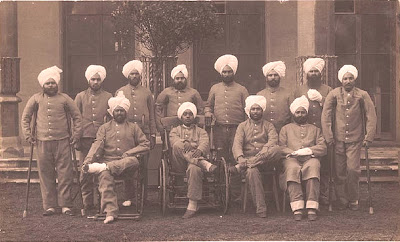 Brighton Corporation commissioned Allen H Fry to take official photographs of the hospital, which were then issued as real postcards

Clearly there was a wonderful opportunity for propaganda. The avuncular care of King George V for his wounded Indian subjects was central to the spin doctoring. It seemed that King George insisted on giving up his own bed, and was prepared to roll bandages for his lads. In fact King George and Queen Mary only visited the Brighton Pavilion once, as far as I can see. They presented the Victoria Cross to an Indian soldier and had the event filmed (11 minutes of footage survive). Yet the publicity continued to suggest that, despite no royal being in the palace for 64 years, Brighton Pavilion was still the royal couple’s home and that they spent each day, playing cards with the patients and writing letters to the soldiers’ loved ones.

Were they hidden motives for helping the wounded Indian comrades? Rosie Llewellyn-Jones suggested that small groups in India, both Muslim and Hindu, were actively working against imperial rule, in collusion with Germany and the Ottoman Empire. If Turkey entered war on the German side, there was an added concern - Indian Muslims might not be prepared to fire on fellow Muslims fighting for Turkey. It was essential, therefore, to show that the differing religious groups were being well cared for. 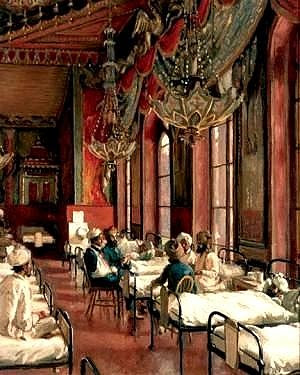 A souvenir book was published, in English and Urdu, and given to former patients on their return to India. The book promoted an idyllic image of the hospital and the care they had received: "In many an Indian village in the years to come, these soldiers, their fighting days long over, will talk to their children's children of the Great War. Their faces will then glow with pride as they tell of the day when they were lying wounded in a Royal Palace, and the King and Queen came to their bedside." Postcards of the same caring images were sold in the hope they would be posted home to India.

The Daily News acknowledged that the Indian soldiers were mown down in such numbers that existing hospitals behind the lines and on the south coast of England could not cope. 1.5 million Indians enlisted during the First World War, of whom 43,000 were killed and 65,000 were wounded. As more and more Indian soldiers were wounded, two other buildings in Brighton were turned into hospitals. The York Place schools were converted into a hospital for the more heavily wounded troops, while the Elm Grove workhouse, renamed the Kitchener Hospital, treated the less wounded.

These three Brighton hospitals, so urgently opened for 2000+ Indian casualties, were told they were closing when the Indian divisions were withdrawn from France. By January 1916, there were no patients left.

So the Pavilion had become a media spectacle and a source of propaganda, for the royals, for Brighton and for Britain. Only recently has the war time history of Brighton and its Royal Pavilion has been reanalysed and displayed. Since late 2010, the Royal Pavilion has mounted a permanent exhibition, displaying the Indian hospital, complete with archive photographs, paintings, beds, uniforms, medical equipment and newsreel footage. 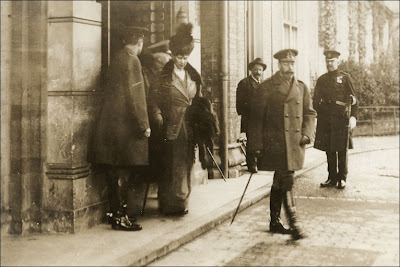 Readers will enjoy the book by Joyce Collins called Dr Brighton's Indian Patients, December 1914-January 1916 (Brighton Books Publishing, 1997). Suzanne Bardgett's journal article (History Today, March 2015) is appropriately called "A Mutual Fascination: Indians in Brighton During the First World War".  The people of Brighton offered a warm welcome to the wounded Indian soldiers, as did the various royal family members. Only the military authorities and the town councillors were anxious.

Hello Helen:
it was only relatively recently, when a neighbour of ours in Brighton told us about it, that we knew of the Brighton Pavilion being used to house injured Indian troops. It is such a curious notion that these soldiers should have been housed in this building which would, as you say, have seemed to resemble palaces in their home country.

Only a few weeks ago, whilst waiting for the nearby bank to open we were looking at the gateway and plaque commemorating this most intriguing and unusual piece of military history.

Osborne on the Isle of Wight? I don't know about that. Always something to learn. But then I didn't know so many Indians fought for England either.

I knew most of this but still have to visit the place. I have only driven by so far and think that it is an amazing architecture, a bit out place and very eccentric but still outstanding.

Osborne was built in the 1840s as a quiet and private place for Victoria and Albert to spend the summer holidays with the children. A palace, yes, but more domestic than their normal residences.

You should visit the Isle of Wight in July and August for a really lovely experience.

I wonder why this part of World War One history is not better known. It was a great story then and is still pretty impressive now.

The numbers were staggering. Some 1.3 million men joined the Indian army by 1918, a million of them serving in overseas theatres of war. The people of Brighton, the British Army and the royals were keen to show their thanks.

George IV seemed to have been a fun loving prince who simply wanted to get back at his rigid father and have a good life with his lady friends and his intellectual soul mates. But who came up with the final ideas for the Royal Pavilion - the prince or the architect John Nash? Who in particular chose the onion-shaped dome, pinnacles, minarets and "tent" roofs?

I suspect the prince had a hand in every, exotic decision! Well worth visiting.

A very beautiful place. Thanks for more new information.

Hi Helen. I have always admired the Royal Pavilion in Brighton as a over the top exotic pleasure of a Prince's Passion. I lot of thought, time and money went into this interesting building. I also love the Neoclassical work of John Nash. I did not know the history of this building after the Prince, thanks for this post.

As much as the idea of royal privileges makes me annoyed, this truly was and is a fine building.

There are still some questions to be answered. We know that many more buildings in Brighton were transferred to the army for its medical and rehab needs, including a workhouse. So why were none of the other hospitals featured in the official propaganda?

Why were the three Brighton hospitals, so urgently needed for Indian casualties, told they were suddenly closing when the Indian divisions were withdrawn from France (Jan 1916). Where did the wounded go?

I love John Nash because his architectural legacy was largely Georgian, handsome and eternal. His streets, terraces, crescents of town houses and parks were elegant and perfect. My favourite is Park Terrace, Regent's Park.

Of course being known as the architect to King George IV was not necessarily a great thing to add on an architect's CV :(

Top B Schools in India said...

Great information.Thanks for sharing this useful information with all of us.Keep sharing more in the future.

Have a nice time ahead.

Is there any equivalent museum in India, marking the participation of Indian soldiers in World War One? The Royal Pavilion's permanent exhibition, showing the hospital, photos, art and artefacts is well worth visiting.

So is The Chattri, the war memorial in Brighton marking the site where Indian soldiers (who fought and died for the British Empire) were buried.

Hels - One can always count on you for fascinating posts!

An excellent look at the hidden history of the Pavilion. I have no doubt that Queen Victoria loathed it! Truly living up to her own "Victorian" ideals...

It is a great story *nod*, especially since, during WW1, "the Pavilion became more than a hospital: it became a media spectacle."

So I wonder why it took until 2010 before a permanent exhibition was opened in the first floor in the Royal Pavilion. Get hold of the exhibition catalogue - it is excellent.

Ha! A white elephant of a building, so who better to appreciate it than the Indian subjects of HRH?
Embarrassing expenditure on such royal follies had to be expiated somehow, so using the building for the rehabilitation of Indian troops was a good way of going about it and justifying somehow the expense in the public's mind?
It was also good propaganda showing that the colonists were caring for their loyal subjects...

I hadn't thought about the HUGE expenditure on architecture because The Royal Pavilion had been built many decades earlier.

However it makes perfect sense. There really WAS a ton of space for wards, theatres, kitchens for every different religion, location close to a halal slaughterhouse, temples and mosques, gardens for fresh air and gentle exercise.

Fantastic!!! the publish is really the greatest on this laudable topic. I concur with your conclusions and will thirstily look forward to your future updates. Saying thanks will not just be sufficient, for the fantastic lucidity in your writing. I will instantly grab your rss feed to stay privy of any updates. Solid work and much success in your business enterprise! Thanks for the great list, I’m always looking for more inspiration for my journey to being much better at interior design, thank you!

I recommend you read Suzanne Bardgett's article about the relationship between the wounded Indian soldiers, the citizens of Brighton and the City Council (History Today, March 2015). I will add a reference to the post.