The garden city movement was a British approach to urban planning that was founded by Sir Ebenezer Howard. Howard’s book Garden Cities of Tomorrow: A Peaceful Path to Real Reform came out in 1898, just one year before he founded the Garden City Association in 1899.

The intention was to combine the advantage of town life with the attractions of living in a healthy rural environment. Garden cities were to be planned, self-contained communities surrounded by green belts. They were to include carefully balanced areas of residences, industry and agriculture. Standards had to be maintained beyond the design and building phases; it was important that both the town and the agricultural belt would to be permanently controlled by the public authority under which the town was developed. 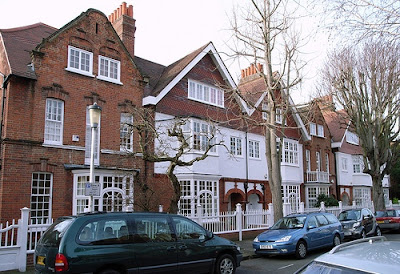 In my earlier post, I had discussed Letchworth Garden City 1899, Hampstead Garden Suburb 1907 and Welwyn Garden City 1919, all of them in or near Greater London. All of which begs the question, where did Ebenezer Howard and his association's ideas come from?

Bedford Park Garden Suburb was one of the world's first garden suburbs. As far as I can see, the merchant Jonathan Carr was politically progressive but he was not interested in free housing for impoverished families and he did not believe in communal living. Since we know, for example, that Carr formally created the Bedford Park Company, we can assume that Carr was interested in raising money for his speculative ventures. As it happened, the Company later collapsed, but that only meant that the remainder of the Bedford Park land was sold off to other developers. 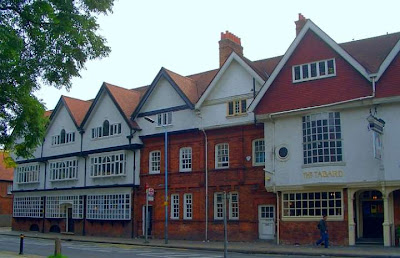 Shops and tavern in Bedford Park

Jonathan Carr bought 24 acres of land, just beyond the western fringes of London, in 1875. In his discussions with potential architects, Carr prioritised his needs: attractive houses for middle-class families; clean and healthy village living; and an easy commute into London.

The first architect for the estate was Edward William Godwin a leading member of the Aesthetic Movement. Developer and architect did not get on well together, and as Bedford was not built in the cooperative manner like some later developments, Carr simply asked Godwin to pack up his plans and pencils, and leave. In 1877 Carr hired the architect Richard Norman Shaw instead.

Individually designed detached and semi-detached houses, arranged as terraces, were used at Bedford Park. Shaw adapted C18th styles in red brick and white joinery that he called Queen Anne. So his scheme was important because Bedford was one of the first garden suburbs, but it was also unusual in architectural terms. The nature strip, with its mature street trees, as well as the private garden separated from the neighbours by low fences, appeared everywhere. It won’t surprise anyone that Shaw’s work became very influential. 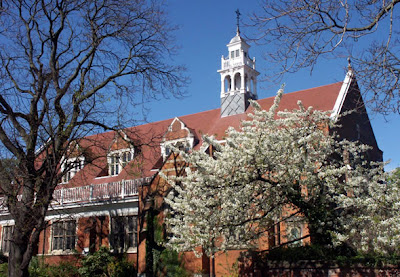 The modern historian Richard Cavendish thought the strong sense of community grew out of the estate’s dendritic layout, with the streets spreading out like tree roots from Turnham Green station. I suspect the newly arrived residents also loved the idea of having a pub, church, club, parish hall and shops at the centre of their village.

St Michael and All Angels Church 1880 was not just any old church, of course; it was designed by Shaw as the centrepiece of Bedford Park. I wonder how the rest of the community sympathised with Shaw’s Anglo-Catholic preferences. Perhaps they were mollified by the presence of the great pub, mentioned above, opposite the church.

The concept of a special estate owed much to the Aesthetic Movement of the 1870s, a movement that romanticised the simple and honest rural life, and celebrated freely expressed beauty. Bedford in turn attracted the families of artists, architects and other aesthetic types, and provided dedicated studios in many of the houses. Perhaps only fashionable, very literate people could afford to live there eg writer WB Yeats, painter Camille Pissarro and Granville Fell, editor of Connoisseur (my second favourite learned journal). 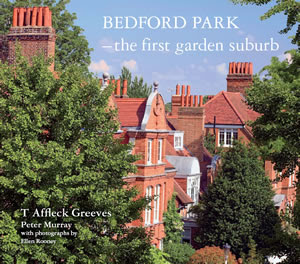 
So a full 25 years before the Garden Cities Association was formed in 1899, Bedford Park had showed that many of Sir Ebenezer Howard’s goals were achievable. Bedford Park also showed that arts and crafts developments thrived in the garden suburbs in and near London, as Hampstead Garden Suburb later did.

In 1967 the government formally listed and protected the greater part of the estate, a total of 356 houses. Many of them have since been renovated.

You might like to read Bedford Park: The First Garden Suburb, written by T. Affleck Greeves and published in London by Anne Bingley in 1999. The book includes a selection of old photos taken soon after the suburb was built in 1875. Other illustrations include maps, drawings and architectural plans.
Posted by Hels at 27.12.11

Thought you might like this -
http://en.wikipedia.org/wiki/Port_Melbourne,_VictoriaGarden
Leon
CityGarden City is a locality within Port Melbourne and the City of Port Phillip. It started in the 1920s as a planned "garden suburb" similar to those built in Britain a few years earlier during the Garden City Movement. The early development was built as low-cost housing by the State Bank, with later additions of public housing by the Housing Commission of Victoria. It comprises semi-attached double-storey houses arranged around a series of public open spaces in a distorted Beaux-Arts layout. Contrary to popular belief, the "Bank Houses" were never public housing and have always been in private hands. The "Bank Houses" area later became known as "nobs hill", a reference to relative wealth of their occupants compared to the residents of the clinker brick public housing that was added later. The Housing Commission area was known as 'Little Baghdad'.[4]

I remember Bedford Park in the 60's and it had gone well downhill by then, so glad to see it is being revived. Although not a capitalist, at least he designed a superb people liked with a pub etc. I think some of the ones you have featured were well intentioned but paternalistic.

I suppose Haberfield is the luckiest because its heritage order has protected so much of the original architecture from destruction.

I suspect Beford Park was starting to look a bit tatty after WW2. Many of the houses were in multi-occupation then, and when demolition threatened, residents feared the worst.

The Victorian Web is a terrific reference, since its photos of Bedford Park are beautiful.

Was there any architectural theme going on at Bedford Park, or did they design whatever popped into their mind?

although Carr was a very keen supporter of the arts and crafts movement, his top concerns in domestic architecture were
a] different sizes of property,
b] affordable middle class houses
c] suitable homes for an intellectual and artistic community, and
d] ready access to community facilities and public transport.

So Carr asked for a series of designs suitable detached, semi-detached and terraced houses. It was more important to give the houses an individual look
rather than go for one perfect look across the estate as a whole.

I am ordering this book now!

The joy of a pictorial survey, "Bedford Park: The First Garden Suburb", is that it can show how Bedford Park was planned and how it turned out. The book uses excellent photographs, maps, plans and drawings.

The joy of Sir Ebenezer Howard’s book "Garden Cities of Tomorrow" is its theory base. But Carr started in 1875, so of course Howard had 23 more years to get the theory base sorted!

I wonder why the St Margaret's Pleasure Grounds with 13 acres of parkland nestling behind over 100 houses, mostly Victorian, which were conceived and started in 1854 are not credited with "London's first Garden suburb". Well greater London anyway!

many thanks for that. And here I was thinking I was being provocative saying 1875 was early! Twenty five years before the Garden Cities Association was formed in 1899, Bedford Park had showed that many of Sir Ebenezer Howard’s goals were achievable, even if the language was not yet fully developed.

If St Margaret's was a planned residential estate for the middle classes and if Trustees were appointed to maintain the shared areas and facilities, then I am with you. "Pleasure Grounds" is an interesting label.