The Oliver typewriter was invented in the 1890s by a Canadian minister from Ontario, the Rev Thomas Oliver (1852-1909). The minister wrote at least one sermon a week, plus speeches at weddings, funerals and baptisms. He needed to stand in the pulpit and read clearly to his awaiting congregation, not stumble over illegible hand writing. So like every doctor and cleric before him, this reverend gentleman had to deal with his legibility problem. 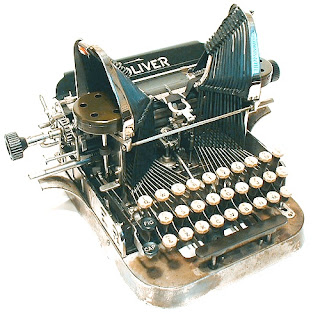 Oliver type writer, 1895 production type
In 1888, Oliver began to develop his first typing machine made from strips of tin. After years of development, he had developed a prototype model, composed of 500 parts. I don’t know why the good businessmen of Ontario didn’t invest in the machine. But if Rev Oliver was going to realise his dream, he felt he had to move to Epworth Iowa, continue his work with the Methodist church and look for investors.

He married Mary Ann Eddy, a Canadian, and had two children, but I cannot find what happened to her.  The second wife was also a Canadian who moved withRev Oliver after he decided he would be more successful south of the border. The children of the second marriage were born in the USA where he resigned his ministry and threw himself full time into inventing.

Conventional typewriters then had the type arms laying on a bed in a well in the bottom of the machine. When the key was struck, the arm rose up in an arc and hit the page on the platen above it, before falling back into place. Why not, Oliver proposed, mount the arms in twin towers, above the platen, on either side of the typewriter. Thus his arms would utilise gravity by falling from the towers when struck, down on the platen.

I don’t know if he specifically wanted the user to see what he/she was typing – perhaps it was just serendipitous. But having the type-bars swing down to the platen from the two type-bar towers allowed for "visible typing". In addition, Oliver mounted the type face in the middle, creating a sturdier machine. 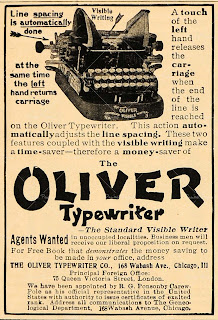 1904 advertisement for Oliver Typewriter (called the visible writer)
The Oliver Typewriter Co. was incorporated in 1895 and immediately begun operating in the USA, with its tiny administrative headquarters in Chicago. Then in 1907 the company took the first five floors of the Oliver Building which was build in North Dearborn Street, Chicago.

Soon the manufacturing sector of the business moved from Iowa to a factory in Woodstock, Illinois on a 12 acre lot next to the Union Pacific railroad. This was the real home of The Oliver Typewriter Company. Employee recreational activities included a company band and baseball team. Oliver built a bandstand for the Oliver Typewriter Band in Woodstock's Square in 1908.

Not only was the design clever, but so was the method of sales - the company established sales networks by encouraging customers to become local distributors. Although I have seen paid advertisments in newspapers and magazines, it seemed that world of mouth advertising was cheaper and more effective.

Thomas Oliver died in 1909 so he didn't see his company's sales go gangbusters. When the company was at its peak, some 400 typewriters were produced daily and sold. The Oliver Typewriter Co. employed 875 workers in the Woodstock factory alone, and there were branch offices across the USA including Baltimore,  New York, San Francisco and Seattle. Only when they changed sales tactics to a mail-order scheme in 1917 were the branch offices closed.

Competition and a recession in 1921-1922 caused many customers to default on their payments. In 1926 the board decided to liquidate, so the American plant closed and the company moved to the UK, becoming the British Oliver Company. 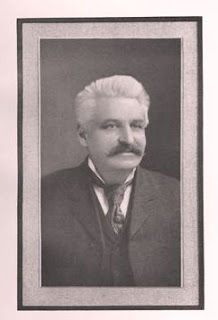 Sometimes I find information in amazing sources eg the Canadian Boer War Museum. The Oliver Typewriter had a slow start in the early 1890s but became popular just as the Boer War was reaching its worst era in 1900-1901. During the war this would have been the typewriter used to send messages or to type up news stories. The Canadian Boer War Museum was keen to add the machine to its collections, in order to preserve important Canadian heritage memorabilia.
Posted by Hels at 8.11.11

Interesting machine. I have never seen one and at some point that style must have disappeared. It has a shift key to type numbers. No connection to Olivetti?

Did the Rev Oliver invent anything else? He seemed to be a very energetic and creative chap.

Andrew
good question, since Olivetti and Oliver are almost the same name and both made typewriters 100+ years ago.

But the Olivetti company was founded as a typewriter manufacturer in 1908 in Turin by Italian electical engineer Camillo Olivetti. The Oliver Typewriter Co. was founded by a Canadian pastor (of Scottish heritage) in the USA in 1895.

ozTypewriter says we should follow Rev Oliver's career via his patents over the years. His first patents were, apparently, for a tub washing machine in 1887. In 1890, he patented a can handle. His first typewriter patent, issued in 1891, was for a very different-looking machine. Then there is something about bundling machines for newspaper mailings, possibly with someone else in the Company.

So apart from the endless typewriter designs, Oliver was a VERY creative man.

I knew of it but never explored the story so really enjoyed that.

Perhaps I'm unfair but people of this period just did so much. Many Victorian writers for instance thought it normal to start at 4am.

Something was needed and they did it.

I've been reading The Victorian Internet about the invention of the telex. I'm just amazed at the enegy of these people.

Hello Helen:
Very often we find information, previously unknown, in amazing sources one of which is, unfailingly, 'Art and Architecture, mainly'. Once more you have provided a most informative post on an unusual, and we are fairly certain little known, subject which, as always, we have not only enjoyed reading but have also added to our knowledge.

Absolutely! There was something heroic about late Victorians and Edwardians who tackled and solved problems.

Thomas Oliver did indeed do well financially out of his inventiveness and hard work. Holding 65% of the company stock, he eventually earned the sum of $3,000 a year.

But during all the early years of experimentation, he had no idea of what the future would bring financially. He must have been spurred on _largely_ by the need to conquer problems, to invent new technology, to innovate.

we come to stories in the strangest and most varied ways. I saw this bizarre typewriter on The Antiques Road Show and caught the name Rev Thomas Oliver of Canada. The rest was a sweaty search through any archives I could find.

What a clever fellow! I had an antique typewriter from the 1920s that I used as a kid to write mysteries. (I was convinced I was the next Agatha Christie, and the typewriter added some romance to the whole thing). Unfortunately, it broke and I couldn't find anyone to fix it, so I donated it to Good Will (which I now regret, it looked so cool!). Those things are so resilient. They were definitely made to last, and if I were more mechanical I could have fixed it myself.

Objects are just junk until they are 100 years old, then on the 100th birthday, they become desirable and collectable antiques. There is no way you might have known that a pre-WW1 Oliver typewriter would one day be chased by museums and collectors.

Thus very few objects ever reach antique status. Mostly we throw out anything that granny had stored in her attic.

Fascinating! I also wondered about the similarity between Olivetti and Oliver but see the answer above. I really should learn more about the Boer war, seeing as some of my friends grandparents were in British concetration camps, but I am so interested in Byzantine and Serbian meideval history at present.

I didn't get into history until 1990 when I had a mid-life career crisis and went back to uni. Starting again in history and art history opened up a whole new world, previously just guessed out. But there is soooo much to be fascinated by.

Talking of opening up new worlds, Byzantine and Serbian medieval history must present you with lots of new reading material :) I try to limit myself to Britain and the Empire, plus Europe as far east as Vienna. And I limit myself to 17th, 18th and 19th centuries. But limits are very frustrating, aren't they?

The best thing about history blogs is that you can read each post while drinking one cup of tea. For time-poor citizens, that is a blessing!

But be careful Emm I was reading the Musee d'Orsay this afternoon describing the Pre Raphaelites as decadent art and I knocked my full cup of coffee everywhere!

@ Hels: oh really? That sounds so much like what I am going through right now. I thought I majored in psychology at Uni but sociology and politics continue to have a lasting effect on me. To date, my interest has been mainly in modern history: apartheid, Cambodia, Rwanda and the Balkans but I was reading Tim Judah's The Serbs and kept getting stuck on and re-reading the medieval section. Which lead to a desire to learn more (you blog was one of the first places I searched) which lead to a general appreciation of Byzantine history too as it was so intertwined with Serbian history. I also want to go back to Uni now but have been lucky to match that with where I'm going at work.

Studying further and convincing your boss it was his idea? Priceless.

@ Hermes: that's hilarious!!! You and I must have the same clumsy gene.

What an amazing story! It's sad to think that Oliver never saw his typewriter become a best seller.

Oliver was already making good money by the time he died, so I hope he at least got pleasure from his business successes so far. Alas he died too early.

Note that his obituary leaflet indicated that his workers thought Oliver walked on water. "For one hour on 11th February, every Oliver Office in the United States was closed, while all flags were kept at half-mast from the time of death until after the funeral. During the same hour, memorial services were held at Woodstock in the main assembly-room. The _entire_ Factory Organisation gathered to hear sermons by the leading divines of the city, an oration by the Judge of the Circuit Court, and an appropriate musical program by The Oliver Typewriter Band."