The Meissen Company, near Dresden, was the first European factory to discover the formula of hard paste porcelain, at a time when the Chinese had been making a fortune importing this very desirable product. But the discovery wasn’t easy. Augustus the Strong, Elector of Saxony and Chinese porcelain fanatic, was desperate to crack the code. He imprisoned the chemist Johann Friedrich Boettger (1682-1719) at Albrechtsberg Castle and probably would have kept him there for life, in order to find the magical formula. Fortunately for Boettger, he found it!

The Meissen Company was founded in early C18th and delivered porcelain of the quality and purity that made that small town famous. From 1720 on, the fame of Meissen depended largely on the painter Johann Gregorius Höroldt (1696-1775). It seems impossible to overstate Höroldt’s influence on much of Europe’s developing porcelain makers. He used Chinese exoticism, European landscapes and naturalistic birds and flowers, sublimely painted.

Meissen also had the sculptor Johann Joachim Kändler (1706-1775). Kändler was appointed court sculptor by Augustus II the Strong in 1731. He was responsible for the introduction of new forms for porcelain sets, including a wide range of figurines.

Wealthy families couldn’t buy up Meissen porcelain fast enough. And rival companies couldn’t get Meissen’s secrets fast enough, to develop their own porcelain lines. Naturally Meissen became a symbol of wealth and status, and in the 19th century the factory earned both Royal commissions and medals at the various World Exhibitions. 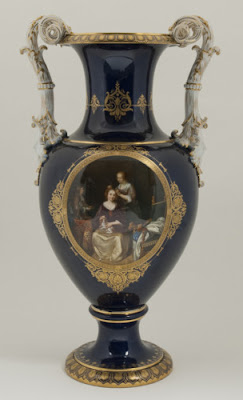 Leuteritz vase, 1880, Meissen, based on a painting by Caspar Netscher. 69 cm high

I have some good 19th century Meissen pieces in my own collection, which I thought were rather lovely. Then I saw a pair of Meissen vases, dating from about 1870, in David Brower Antiques. I am quoting them. Born in 1818, Ernst Leuteritz joined the factory in 1836 as an apprentice and by 1843 he was engaged as a modeller. This impressive pair of topographical vases was created by Leuteritz and are one of the most important and valuable works of 19th century Meissen porcelain available on the market today. Standing at 61cms high and produced in 1870, the vases show two different scenes of Dresden rendered in exquisite detail, a view of Pilnitz and a view of Schloss Weesenstein. Leuteritz first created the design for these vases in 1856, and in 1862 they were selected as one of the key pieces at the World Exhibition held in London.

Vases of this scale and detail are rare as they were only made for exhibition or special commission. One reason is because large objects of this nature (61 cm high) were very difficult to make and decorate. Minor imperfections in the structure of the piece or faults in the decoration and glaze were unforgiving, often causing failure during the firing processes. These monumental pieces are a testament to the experience and skills of the Meissen craftsmen. 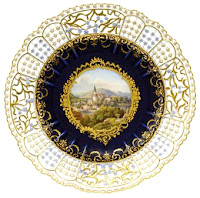 Another lovely, tall Meissen vase was created by Ernst Leuteritz, this time exquisitely painted with Dutch-style images from the C17th.  The 1880 vase was decorated on a cobalt blue ground, heightened by detailed gilded scroll work and embellishments. The panel on the front was  based on a painting by Caspar Netscher (1639–1684) while the reverse was based on a painting by Gabriel Metsu (1629–1667) which depicts the artist with his wife Isabella DeWolff in a tavern.

Far easier, for both the porcelain maker and the artist, were smaller flat plates that rarely broke in the kiln. Christies had a reticulated Meissen plate from c1879, painted with a view of Wesenstein inside a gilt scroll cartouche. The dark-blue-ground well gilt had scrolls suspending swags of flowers and the border was pierced with trellis pattern sections between panels of flowers, moulded with flowerheads. The scene was beautifully painted, but I have to admit that the entire plate was only 25 cm wide. 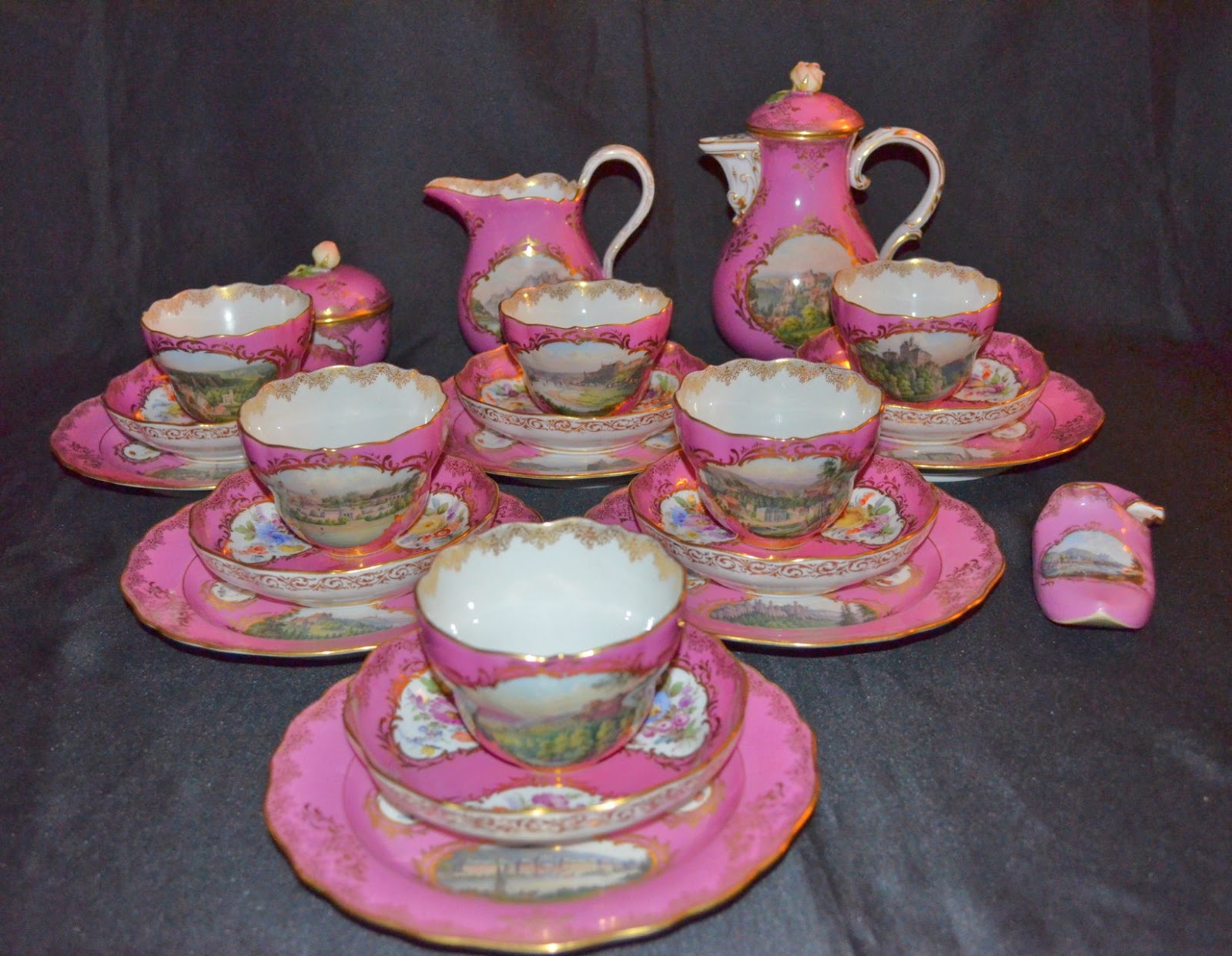 
The Arcanum: The Extraordinary True Story is a super little book, written by Janet Gleeson and published by Little, Brown and Co. in 1999.  It tells the convoluted story of the invention of European porcelain and the founding of the Meissen Porcelain Company.

I'm a sucker for these vases, more for their shape than the paintings on them. I am however terrified that they would get damaged. Thanks for history.

I am soooooo with you. I walk past my Meissen vases at home and think "oh what a clever woman you are, Helen".

The design of the Ernst Leuteritz vases is not absurdly complex, the craftsmanship is very fine, ditto the colours and the landscapes are sublimely painted. Alas they were priced at £300,000 (Aus $460,000), just slightly more than I wanted to pay.

Hello Helen:
As always a most interesting and informative post which we have much enjoyed reading. The two vases which you illustrate are lovely and surely perfect examples of the work of this world famous company.

How fortunate you are to have some Meissen of your own, something for which we very much envy you [in the nicest possible way!].

Now we are off on impulse to the shores of Lake Balaton, minus the computer, for a few days to catch the last of the summer. Who knows what might turn up there?!!

Not really my taste but I'm fascinated how technical advances come about and the impact they make and this sounds so interesting - thanks.

Do you remember a Meissen vase with paintings on it that looked as if they came from 17th century Holland. We discussed it in class.

Thanks for this lovely post! The large Meissen Porcelain vases are magnificent! As I antique dealer I have not come across anything like those in Meissen I have found cups, plates and figurines.

I was a passionate silver collector, especially from the Huguenot era. And although I still look at silver longingly, I had to change to porcelain many years ago (on cost grounds). The collection includes some beautiful German, Austrian and English pieces.

the story of early porcelain in Europe is full of intrigue, theft, blackmail, illegal cross-border smuggling and breaches of patents.

There is no new crime under the sun. I recommend the book :)

many thanks for reminding me. I added it straight away. What a fine painting (two, actually).

I looked at millions of pieces and selected just two. They are bound to be the most beautiful, most expensive and probably the rarest of all Meissen pieces from the 1870-80 period. Don't you wished you owned them?

I love your vases and Meissen is one of my favorite things. I have several figure groups that I adore. Thanks for sharing. Richard from My Old Historic house.

Thank you. Sometimes vases and other decorative art objects can be WAY over the top. Next month I have scheduled a blogpost on a royal item that was made of 5 precious materials, with high relief sculpted animals, birds, flowers, trees, cornucopias etc.

The Meissen, by comparison, is classical, elegant and not over the top.

The vases you have pictured are just exquisite. I can well imagine they must have been near impossible to make and that many more landed up as seconds than perfect specimens. 61cm is quite large though!

Emm
you are correct. Spouse and I went on a tour of the Meissen factory where visitors are taken through each step of the porcelain making process - raw ingredients, potting, sculptural add ons, painting, first firing, glazing, stamping with company logo, second firing, polishing up.

The number of large objects that are thrown out or become seconds is considerable.

I have added your amazing coffee set to the post. Do you have a date for these pieces?

it so happens I have found your blog on the Internet about your pair of Meissen landscape vases.
Precisely why I must show you a photo of a rare Meissen coffee set with landscape paintings as well.
Could you by any chance have interest?

Beside I can offer another valuable Meissen coffee set with Watteau paintings and some other landscape pieces.

Just let me know.
Many greetings from Germany,
Andre

Dear connoisseurs of art!
In my collection there is a beautiful vase Meissen creations.
Its cost is very attractive for lovers..
Are you interested in my offer?

I would be delighted to own Meissen porcelain by Johann Gregorius Höroldt, especially from the 1720s-50s era. Of course I would have to sell a kidney to pay for it but hey, we have to put our priorities in order :)