Ida Dalser (1880–1937) was born in a village near Trento, an Italian speaking region in what was then part of the Austro-Hungarian Empire. As a young adult, she opened a beauty salon in Milan.

Ida Dalser first met young Benito Mussolini (1883-1945) in Trento, where he was journalist in 1909 and the two of them definitely  started an affair. Ida seemed committed to the relationship and was even prepared to sell her beauty salon to help Mussolini, who was then a leftwing journalist, establish his own newspaper. Ida clearly thought Mussolini shared her romantic  feelings. But to a young and ambitious Mussolini, Ida was just a pest, particularly after she told him she was pregnant.

According to Ida, they got married in 1914. And in 1915 she gave birth to his first child, Benito Albino Mussolini. No records of the marriage survive but Mussolini did accept the boy as his son, and paid monthly child support. 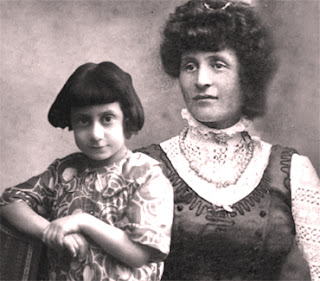 The reasons why Mussolini and Dalser separated after their marriage and the birth of their son remain unclear, but perhaps he was becoming closer to another of  his long term mistresses Rachele Guidi. Or perhaps Ida was too emotionally demanding. Anyhow when WWI broke out in 1914, Mussolini rushed to join up. In December 1915, while recovering in a hospital from wound caused by a grenade launcher, the hospital priest married Mussolini to Donna Rachele Guidi at the bedside. When Ida Dalser heard about the second marriage, she was outraged. There had been no divorce!

Immediately after his second marriage, Mussolini left Italy to rejoin his army unit. Ida constantly wrote to her husband, and complained of her situation to the military and civil authorities. Two pieces of evidence from this period suggest that Ida was still considered a legitimate wife. Firstly while he was on service, the Kingdom of Italy regularly paid Ida a war pension. Secondly when Mussolini was injured by a mortar shot in 1917, she received a visit from the police notifying her that her husband was wounded in action.

In 1917, Mussolini came back from the war. His political career took off but his passion for socialism was over. He organised the Italian Combat Squad (WW1 ex-servicemen) in 1919, founded the National Fascist Party in 1921 and was soon elected to the Chamber of Deputies. In October 1922, Mussolini and the Black Shirts marched on Rome, intending to force King Victor Emmanuel III to set aside the old prime minister. The military could have easily controlled  Mussolini and his Fascists, had the king asked them to, so the king has to take a great deal of responsibility for Mussolini's rapid rise to power.

Mussolini now had power and was officially recognised by the then ruling House of Savoy. But even a dictator needed papal approval, something that may have been withheld, had the church known about his pre-marital affair, his possibly illegitimate son and his possibly bigamous second marriage. Furthermore his five children with Rachele Guidi had to be protected.

That didn't mean for a moment that Mussolini now saved himself for his second wife. Michael Day and Peter Popham noted that the ambitious young leader demanded sex in industrial quantities from beloved mistresses and call girls alike. But it did mean that Ida Dalser and her son were watched very carefully by the police. She told everyone about her marriage to Mussolini, but noone believed her… or they didn’t want to get involved with her. Eventually she was certified and locked up in a psychiatric hospital in 1926. Still certified, she was later isolated in a psychiatric prison on the Venetian island of San Clemente, where she died in 1937. By the time of her death, after 15 years of being called a liar and a traitor, she really was insane. 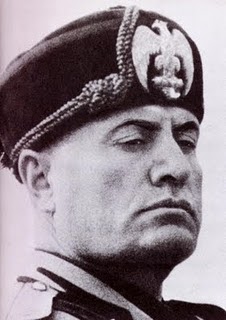 His son Benito Albino Mussolini was removed by government agents at 11 years of age, told his mother was dead, and was adopted out. He enrolled in the Italian Royal Navy, and always remained under close scrutiny by his father's fascist government. Rather unwisely, as it turned out, he also persisted in stating Benito Mussolini was his father. So he too was eventually certified, locked up in an insane asylum in Milan and was given mind-controlling medical treatments. There he died in 1942, aged tragically young (26). Both Ida and Benito junior were placed in unmarked graves.

The story of Benito Mussolini's first marriage was totally hidden during fascist rule in Italy. In particular Mussolini's officers erased all paper traces of Benito's and Ida's relationship. They overlooked only one thing according to the documentary Mussolini’s Secret: a certificate by Milan city council ordering Mussolini to make maintenance payments and referring to his wife Ida Dalser and their child.

It is not 100% certain that Mussolini’s first wedding was legal. However it is not too much of a stretch to say that the Italian dictator drove his first woman and son to early deaths in lunatic asylums; public knowledge of their existence might have somehow compromised his rise to power. Perhaps Mussolini should have been more worried about Margherita Sarfatti, Claretta Petacci and all his other mistresses.

All the information for this inglorious part of Mussolini history was finally discovered and published in 2005 by Italian journalist Marco Zeni.
Posted by Hels at 14.5.11

Hello Helen:
Truth will always out, as they [whoever 'they' are] say. This is all absolutely fascinating, an almost make believe story.

Milan railway station, built by Mussolini, is, as you probably know, a lasting memory of Fascist Italy.

Have you seen the film Vincere, with Giovanna Mezzogiorno and Filippo Timi. It was a very good version of the same story.

Jane and Lance,
sometimes stories take a GREAT deal of time to be told. Whether or not Ida had a real wedding in 1914, as she believed, or a mock wedding, as Benito insisted, the child was definitely born in 1915.

The story took until 2005 to emerge, after 90 years of disinterest or embarrassment or downright obfuscation. What could possibly have happened to the Mussolini and his Fascists, had the country known about Ida and the baby? After Mussolini's death, whose interests were being served by not acknowledging Ida and the boy? Very intriguing.

Irena,
I did see the film and thought it was well done. But I hadn't read any of the reports based on Marco Zeni's journalism at that stage.

If I saw Vincere now, it would be much more meaningful.

Wow, what an interesting story! What a pig Mussolini was! I'm afraid my knowledge of that period and the Fascists is lacking but I'm learning over time...

So I find it incredible that he'd have been anxious to totally cover his tracks about Ida and Benito jnr, even to the extent of letting them die miserable, lonely deaths in psychiatric institutions.

The general view these days is that Mussolini was a golden hearted family man and patriot who just went a bit astray in allying himself to the Germans. Marco Zeni showed that he was not.

True, but as you say, he needed to somewhat pull the wool over the Vatican's eyes.

Are there not certain similarities between Mussolini and Italy's current leader?

I know little about Mussolini, but a bit more now. There must be many descendents around.

Interesting post Helen. When I saw Italian Stallion in the title I thought you might be writing about that geriatric Lothario Berlusconi...

Mr Doolan and Glen
funny you should both say that :)

The Independent on Sunday (24/11/2009)compared the sex lives of Mussolini and Berlusconi, and found it all very sleazy. But I carefully avoided the comparison because it didn't seem to be throwing any light on the behaviour of the Fascists in the inter-war era.

Now I am beginning to change my mind. In 2010 a number of journalists said that Berlusconi himself was citing Mussolini as his role model. Berlusconi stated in an interview with British magazine The Spectator that Mussolini was a benign figure who never killed anyone and who sent his political opponents on holidays.

Andrew,
apart from the five children of Rachele and the one son of Ida, there may have been children and grandchildren all over the place. Every day someone is asking for a DNA test to prove that he/she is definitely Mussolini's. One example will be helpful.

Claudia Apriotti of Rome has claimed to be the product of a liaison of a brief relationship between the Italian dictator Mussolini and a then teenage Colonna princess. She is the seventh illegitimate child attributed to Mussolini. Apriotti claims she is the daughter of Princess Sveva Vittoria Colonna who was 19 at the time of the alleged relationship and is still alive. Apriotti says she was first brought up in a castle and then fostered to a couple of peasant farmers north of Rome.

helllo very interesting !! mmmm Im just about to watch Vincere this evening nthing changes does it I see its the French today !
Fay x my friends who visited this week are just back to Melbourne!
small world

Fay
it is a VERY small world! Until I wrote this post, I would have guessed that very few people outside Italy would have seen Vincere. Now I am hearing that audiences everywhere are finding the film very moving.

Anastasia wrote, in blogcatalog, the following:

The March on Rome was part of the mythology promoted after the event that the March, a comic opera affair, was instrumental in ensuring a transfer of power to Mussolini. Victor Emmanuel was by no means 'forced' into appointing him prime minister. If anything he gifted power to the Fascists under the advice of conservative and business circles behind the throne. He had already been told by General Pietro Badoligo that the military, loyal to the crown, could thrust Mussolini's rag-tag Blackshirts aside with ease. Even so he refused to sign Prime Minister Lugi Facta's martial law decree. So, if any one man was responsible for Italy's twenty year fascist dictatorship it was the king. The Italian monarchy would pay the price for his cowardice and lack of judgement after the war.


Many thanks, Anastasia. I am grateful for advice from someone who knows modern history very well and so I modified that paragraph straight away.

This post was very interesting to read for me! And I love the pics you have found of him here. So thank you for this post because I enjoyed it a lot. :-)