Everyone knows that Jennie Jerome (1854-1921) of New York was married in the British Embassy in Paris to Lord Randolph Churchill in 1874. Lord Randolph was the second son of John Winston Spencer-Churchill, 7th Duke of Marlborough. In 1895 Consuelo Vanderbilt, the daughter of the American billionaire Willie Vanderbilt, married the 9th Duke of Marlborough in a huge New York wedding.

In fact in 1895 alone, nine American heiresses married members of the English aristocracy.

But the concept of cash-strapped British aristocracy searching for beautiful daughters of very wealthy American families was not invented in late Victorian times. Jehanne Wake has shown that the custom of American money  marrying British aristocracy has been going on much longer. Her book, Sisters of Fortune: The First American Heiresses to Take Europe by Storm 1788-1874, published by Chatto and Windus in 2010, goes back to the earliest part of the 19th century.

Marianne, Louisa, Bess and Emily Caton were the four sisters of fortune who were descended from the first settlers in Maryland. And not just any old family - this family was extra-special. The girls’ grandfather, Charles Carroll (1737–1832), was one of the signers of the USA’s Declaration of Independence in 1776, not a robber baron from the age of oil wells and steel mills. Carroll was one of the wealthiest men in Maryland, owning extensive agricultural estates that made their money from tobacco and slavery. He was the closest America was going to get to aristocracy, although he was Catholic.

I am not sure what would have been a bigger problem in Britain, once the girls sailed to London – that they were foreigners with allegiance to a foreign nation, or that they were Catholic. When Marianne, Bess and Louisa Caton first arrived in London in 1816, only Emily stayed in North America, consolidating the family estates and marrying a Canadian fur-trader.

At the very time that the news of the Battle of Waterloo (1815) was filling the gossip columns, the three charming and beautiful Caton sisters were still unknown in Britain. Yet that situation changed quickly. Sex and money were always the twin forces that drive so much of human endeavour, particularly apparent in the cauldron of the Regency period. The young women had the money and they were willing to negotiate with young men of status. The three of them exploded into the heart of Regency high society and the Prince Regent himself took an interest.

It could not have been easy in class-ridden Britain. That the siblings survived the many assaults on their reputations, and became bastions of a society at first intent on excluding them, is evidence of unusual strength of character. And evidence, I suppose, of beauty. The largest portrait below, of Marianne Caton, was painted by sublime society portraitist Sir Thomas Lawrence. 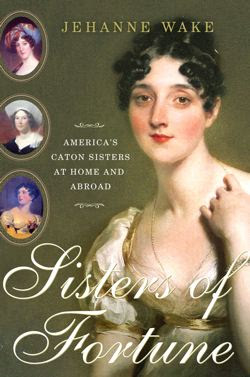 Portraits of the four women on the cover of  Wake's book: Sisters of Fortune.

As soon as he met Marianne Caton, the Duke of Wellington fell in love with her and this (?one sided) love affair was one of the most important parts of Wake’s story. When she was 37, Marianne married the impoverished 1st Marquis (Richard) Wellesley, Wellington's brother and Lord Lieutenant of Ireland. I wonder what they made of Catholic Marianne in the vice-regal court of Protestant Ireland?

In the end Marianne's charm and money must have worked their magic.  She rose to become the first American-born marchioness and lady in waiting to Queen Adelaide. An extraordinary statement of acceptance for the grand-daughter of a slaver.

At the very same age (37), Louisa married Francis Marquis of Carmarthen who succeeded his father as the 7th Duke of Leeds in 1838. Safely ensconced as the Duchess of Leeds, Louisa apparently became a friend of young Queen Victoria.

Bess remained single for a very long time (till 49) and made her rather lucrative career in the international stock market, a very rare occupation or pastime for women. Bess looked after her own finances of course, but she was also well placed to deal with her sisters' investments - and did! Then she too married into the British aristocracy, becoming the wife of the 8th Baron Stafford of Costessey Hall Norfolk in 1836. He was a much older man with a very large family and no great wealth, but at least he was a devout Catholic.

Because the 3 British sisters were not young when they married, Emily was the only one of the four Catons to have children.

Wake showed how the three British Caton sisters managed investment portfolios, and were active and informed players in the national and international markets. She showed how they used their social connections to win political or diplomatic appointments for their husbands, and to gain information on investments. But there is one thing I don't understand. The Married Women's Property Act, British legislation that significantly altered English law regarding the property rights granted to married women, allowing them to own and control their own property, didn't come into law until 1882. Even financially savvy women could not have ignored the most powerful parliament in the world. 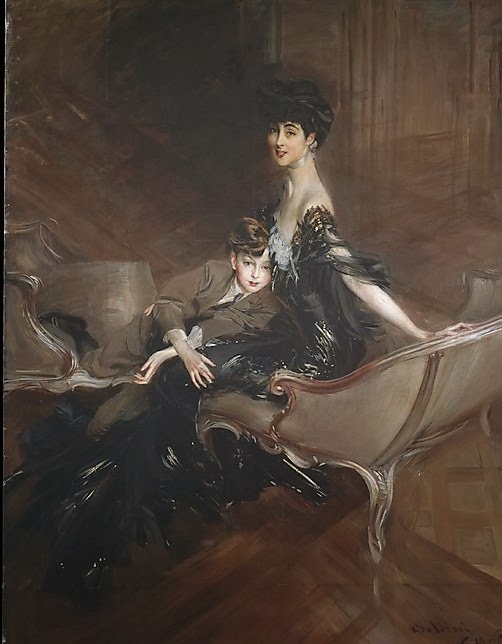 Duchess of Marlborough and her son
by Giovanni Boldini, 1906
Metropolitan Museum of Art NY

Clearly it was a story of money and status, of the choices it gave these sisters and of the way it shaped social life in the decades following 1816. So how much real power did it give to these women, particularly over the men in their lives? Pretty women with good figures and tons of family money were always "seen" to wheedle what they wanted out of their helpless husbands. Not, I think, the Caton sisters. They were active organisers of their own destinies.

I will be interested to read a biography of Lily Hamersley, who in 1888 became the first American after Louisa Caton to become an English duchess. Lily, a very wealthy widow, married the 8th Duke of Marlborough and became chatelaine of Blenheim Palace, seat of the Churchill family. See Lily, Duchess of Marlborough (1854-1909): A Portrait with Husbands, by Sally Svenson.

An Exuberant Catalogue of Dreams by Clive Aslet (2013) is my favourite. In the difficult decades between the agricultural depression of the 1870s and the aftermath of WW2, Yankee heiresses crossed the Atlantic in droves. But Aslet's book brings something new to the topic - amazing images of the new arrivals and their impact on architecture, landscaping, farming and interior design.

There are many stunning portraits of the beautiful and wealthy American women who married into the British aristocracy. Consuelo Vanderbilt (above) married Charles Spencer-Churchill 9th Duke of Marlborough in 1895, and moved into Blenheim Palace. The marriage was loveless but she gave birth to two adored sons, heirs to the dukedom.

I did your course on The Edwardians. At the end of the Victorian era New York apparently had a society magazine, The Titled American. Tony Rennell said it profiled those women who had already made it into the aristocracy and also carried details of eligible noblemen currently on the marriage market.

I am not sure whether to believe it or not. The magazine gave the nobleman's title, his address, the size of his estate and the size of his debts, with the information updated quarterly. Gross.

It became part of popular culture here, and Lord Fauntleroy was based on a variation. Apparently the royal wedding is actually more popular in America than here so perhaps they should have married him to an American.

Joseph
good reference, thanks. I will chase up that magazine myself, if I can find it.

Interestingly, Elisabeth Kehoe used a similar title in her analysis of the three American Jerome sisters, each of whom joined the British aristocracy. Her book is called "The Titled Americans: Three American Sisters and the British Aristocratic World Into Which They Married".

Hermes,
it is very telling that magazines and books, then and now, use pejorative language in describing the match. The American brides were always "cashed up" and their mothers were "overweening and pushy". The aristocratic men were universally described as impoverished and incapable of restoring their families' fortunes.

It seems strange that single American women would agree to go to a distant society where they had no parents and siblings, were often unwanted by their future parents-in-law and were not made welcomed by their new peers. I suppose you have to hope that some marriages eventually turned out to be love matches.

Clumsily I think our American friends seem to find titles and the aristocracy strangely attractive. I haven't noticed it with Canadians or Australians. Odd to me.

Noses would have always looked down upon them, even though they may have had more money that those sneering down at them. I'd never heard of them. Interesting.

The British upper classes were very snooty about income being actually earned by an aristocrat. Working in a profession was bad, trade was worse and robber barons making unspeakable money in oil or steel were unforgivable. I understand all of that.

What I don't understand is how snooty impoverished aristocrats could accept "tainted money" via their new American wives. Wads and wads of it!

Hermes
I suppose Australians, South Africans, New Zealanders and Canadians were in any case an integral part of the British Empire. Moving to Britain was always seen, at least until WW2, as "going home". All honours in these countries back then (although not now) were from Britain, including knighthoods.

It must have been very different for New World countries who were not part of the British Empire. Especially for mega-wealthy USA citizens who were anxious about their status.

I stumbled upon your blog and was surprised to find your discussion of the recent book on the Caton sisters, as well as your coverage of the general subject of Americans women who married into the British aristocracy in the late nineteenth century.

I thought you might be interested in reading my about-to-be-published biography of Lily, who in 1888 became the first American after Louisa Caton to become an English duchess.

Although Lily was the chatelaine of Blenheim Palace, the seat of the Churchill family, for only four years, she left a distinct mark on the property.

Sally
I will add the reference straight away. The readers should find it right on topic!

talking of overweening and pushy mothers, no-one was worse that Consuelo Vanderbilt's mother Alva. Alva brutally pushed her daughter into a loveless but socially advantageous marriage.

Still, the painting is a perfect example of American heiress portraiture in Britain.

I have added a reference to An Exuberant Catalogue of Dreams by Clive Aslet, published by Aurum in 2013. As you would expect, Aslet spent quite some time on the Vanderbilt story!!

An excellent documentary called Secrets of the Manor House started on SBS tonight. Part I was particularly interested in the late Victorian and the Edwardian eras, including Cash For Titles Americans.

Thanks for the reference. If I can't find i on tv, I know it is available from the ABC Shop.

Fascintaing book, interesting history much appreciated. Wealthy Americans of the 'Gilded Age' appear to have done their part to repair leaking castle roofs, dredge the ornamental lakes on European estates, provide an 'heir with a spare' here and there to the bredding of pedigrees. Today we call it 'Foreign Aid' with the help of our U.S. Congress.

the idea of Foreign Aid via the aristocratic marital bed is very cute :)

If it is true that in 1895 alone, nine American heiresses married members of the English aristocracy, there must have been an equal benefit to both sides. The impoverished British upper class was enriched again and ordinary but ambitious American women (and their children) were raised to the aristocracy.

The blog Edwardian Promenade has a detailed and enticing review of the programme "Million Dollar American Princesses". Visit:
http://www.edwardianpromenade.com/tv/review-million-dollar-american-princesses/