It must be the dream of every historian to be the first person to discover something that turns history-writing upside down. I can imagine, for example, the excitement of the first historians to uncover the Dead Sea Scrolls in 1947. Did they realise what they had in their hands? Did they understand that so much of subsequent history-writing would have to be modified, in light of the new discoveries? 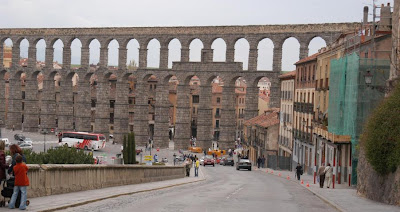 The Israeli newspaper Yediot Achronot broke a smaller, but still exciting story in 27/12/2009.

A Spanish decree from 1412 had forced the Jewish population of Segovia to live in a specific area - it went from the Almuzara, to the section of the city walls located between the old slaughterhouse and San Andrés Gate. The area was closed by seven gates and the main street was Calle de Judería Vieja/Street of the Old Jewish Ghetto. 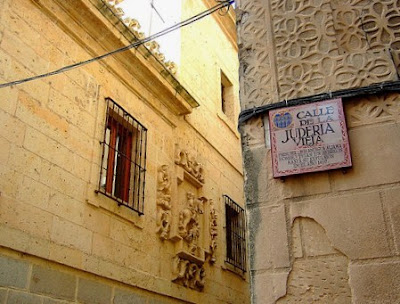 Don Abraham Senior (c1410-93) became one of the most influential Jews to serve the Spanish royals, Queen Isabella and King Ferdinand. Together with his friend, statesman and financier Isaac ben Judah Abrabanel, Don Abraham Senior undertook to farm the revenues and to supply provisions for the royal army, under contract from Queen Isabella. As royal treasurer and court Rabbi, Don Senior enjoyed a very close relationship with the royal family, at least until the two monarchs decreed the expulsion of the Jews from Spain in 1492.

Even then the relationship continued - in June 1492, Don Senior and his son were baptised in Valladolid with the king and queen and the primate of Spain acting as sponsors. Presumably Senior converted to Christianity to be able to remain in the country. Still, if he did maintain a secret synagogue for his fellow Marranos in his home, even the very influential Don Senior would have been taking a huge risk. 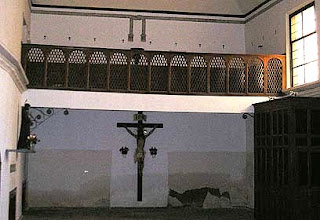 This is the story of how Mrs Udiya Band, a distant descendant of Don Senior, visited the palace and searched for a synagogue that presumably had not hosted a Jew for 517 years. Any knowledge of the synagogue in Don Senior’s palace had been totally lost! The local Segovians were certainly not aware of its existence.

A thorough family investigation done by Mrs Band and her children before arriving in Spain suggested that a synagogue had indeed once operated in Don Senior’s medieval palace. The family knew that the palace was now kept by UNESCO and by the local authorities. On arriving in Segovia, Udiya Band planned to stay for two days, to see the palace and the synagogue, and to continue on. She had already seen the testimonials written by Abraham Senior describing prayers held in his house and stairs to another (secret?) storey. What Mrs Band found was that half of the Segovian palace had been taken over by the Franciscans, and was now being used as a monastery. 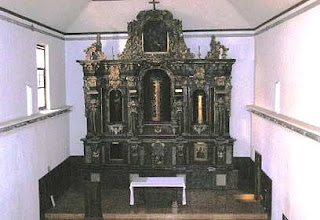 Despite not believing that there had ever been a synagogue there, the Department of Culture of the municipality was helpful to the visitor; the mayor provided Mrs Band with a guide and announced that the whole palace would be open to her. The guide pleaded with the priests in the monastery and he was finally informed that he would receive the key the next morning, under the condition that no one must see where Mrs Band was exploring.

One wonders why, if the municipal mayor was interested in the project, were the Franciscans so secretive?

Mrs Band received the key and a second guide spirited her into the monastery via a small back door and through some corridors. She came to a large room – on the right side was the women’s section with star of david signs and in front were the bima/reading desk and the holy ark. Udiya Band was gobsmacked, and so was the guide. On the Jews’ holy ark, there was an altar and a crucifix to be sure. Otherwise it appeared as if the last of the Jewish congregants had just departed for a spot of Sabbath lunch. 517 years ago!

The guard said that everything has been kept in its original form except for one difference: there had been no windows originally - just small vents near the floor through which air could come in. Here the secretive Marranos could pray without being seen from the street. And there was indeed a side stair case which was not being used these days - that was the stair case Don Abraham Senior had used to reach the synagogue. 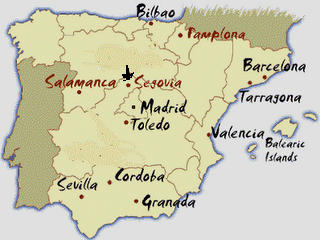 Segovia is just north of Madrid

Apparently Mrs Band’s story did not end in Segovia. Upon returning to Israel, Udiya Band got in touch with historian and ex-President of Israel Yitzchak Navon and the historian Chaim Berneit. I will be very interested to hear what happened next because there are so many questions to ask. If Don Abraham Senior really did die in 1493, for example, who continued running the secret synagogue for the Marranos in the Senior palace?


**
Almost as an afterthought, I want to clearly differentiate between Don Abraham Senior's clandestine synagogue and Main Synagogue of Segovia. The latter synagogue was never secretive, although the front entrance was not directly from the street, but via a courtyard. The Main Synagogue was also confiscated by the Catholic Church and the Crown, and converted into a church in 1419, dedicated to Corpus Christi. Within a couple of years, the bishop of Segovia gave the building to the Monastery of Santa María de Párraces who used it as a church until a terrible fire in 1899.  The church was restored in the early 20th century and is now open to the public; its synagogue origins are still clearly visible and readily acknowledged. 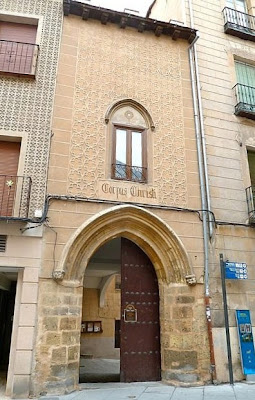 The white walls, horseshoe arches and elaborate capitals in Segovia's Main Synagogue appear to be very similar to the synagogue architecture I have seen in Santa María La Blanca in Toledo. 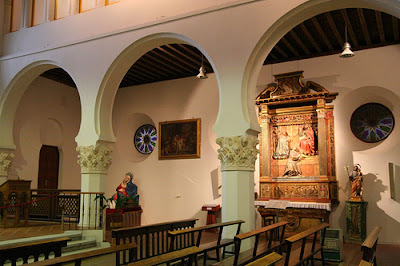 In fact the Juderia of Segovia is full of beautiful old medieval houses, as Slice_n_dice has shown. These houses are two or three storeys high, with exposed wooden beams and whitewashed facades. The whole historical centre has been lovingly restored and conserved﻿, which might surprise people who think of Spain as being a major player in life-threatening medieval anti-Semitism. Apparently there had been five synagogues, a Jewish cemetery, two butcher shops, a hospital and two Talmudic schools in Segovia's Jewish Quarter, during the halcyon days of Spanish Jewry.

My family went on a Sephardic Spain tour and loved it all. I think Spain must have been a great place to live up to 1492.

Fascinating, what a great story. Always makes me realise how much we will never know.

The San Andres Gate in the city wall led into Segovia's old Jewish quarter. The gate still looks to be in very good condition. So this was a very apt place to put the Interpretive Center.

Avner, Hermes and Palace,
many thanks.

although I cannot find any further stories about Abraham Senior's secret synagogue, there is a much greater awareness of Spain's history in general and Segovia's in particular. And the history tours are becoming more and more focused, as you indicate Avner.

I am a history student and have read a lot about the expulsion of the Jews and then the Muslims. Do you have any books you can recommend about Spain before the expulsions?

I liked "The Ornament of the World: How Muslims, Jews and Christians Created a Culture of Tolerance in Medieval Spain" by Maria Rosa Menocal (2003).

Chris,
I REALLY want a planet or a disease or a newly discovered tulip named after me, before I die!

My best example was a C3rd synagogue uncovered at Dura-Europos in Syria, filled with miraculous, full sized wall paintings. Two soldiers fell into a sand pit in 1930 and when they scrambled to safety, the paintings emerged out of 700 years of accidental secrecy.

Finding a forgotten treasure trove was fantastic. But then all the historians who had written text books about there being NO Jewish visual arts until the C13th whatsover.... had to re-write their texts.

I wish I had found it.

Great post! Spain is such a fascinating place. I can't wait to visit there myself. I am a big fan of Flamenco and the architecture of Gaudi

spouse and I travelled all around Spain but we only had one month. I would have needed three months, probably. I hope you enjoy the medieval, Gaudi and everything in between.

Thanks, Helen. I know a Portuguese lady, born in the 1930s, who was raised as a secret Jew, while her family was outwardly Catholic, continuing a tradition since 1492.

peter,
I am absolutely full of admiration for such a woman.

It always strikes me as remarkable that a family could keep up its secretive Jewish beliefs and practices for hundreds of years. One or two generations yes, because the children and grandchildren could remember what life used to be like. But we usually don't remember how our great grandparents lived, to copy their holidays, food, clothes, religious practices - let alone our distant, distant ancestors.

And who would each person marry? Once a Marrano married into a fully Catholic family, the Marrano could no longer practise the old, secretive practices. Thus they would have had to locate other Marrano families, to marry. Did such families have a secret handshake?

From the city of Segovia, we share with you an article (for the moment, just in spanish, we're translating it into english) written by a famous historian, which proves the NON-EXISTENCE of a secret synagogue in Abraham Seneor's house.

Anonymous,
thank you for the reference. I found these translated sentences very telling:

The repression and the later inquisitorial monitoring on the conversos and the social pressure which these people were put under... virtually made the existence nonviable of a oratory like this unviable. It was in a main house, located in centre of the city, frequented by good part of Segovian society and was open to continuous public observation.

The existence of hidden synagogues was acknowledged in other inquisitorial jurisdictions, for example in Spanish America, but it was a phenomenon absolutely exceptional... (in Spain?).