In 1891 Rudyard Kipling (1865-1936) left Britain on what he called a small excursion to the other end of the world because he didn't know how to handle his lady friend Caroline Balestier. Like many men in a romantic tangle, he got himself out of town! But Kipling went further - he travelled to Australia and New Zealand, via the SS Mexican to South Africa and then the SS Doric to Australia!

When his father told the story of Rudyard's sudden travels,  papa's version didn't mention any woman. John Lockwood Kipling only recalled that young Rudyard had exhausted himself by his prodigious literary output in 1890 and 1891, so the young man set off on a sea voyage round the world to recover his nerves.

Kipling spent only a few weeks in Australia - 2 days in Sydney, one day in Hobart and the rest of the time in Melbourne. Although only in his mid 20s, he was already famous by the time of his visit, so he was introduced to various dignitaries, was interviewed by several journalists, and was quoted extensively in the press.

How did it fit all the travelling in? We know that during his fortnight in Melbourne, Kipling travelled along what is now the Great Ocean Road and wrote a short poem mentioning both Lorne and the Erskine Falls. And he must have also visited Apollo Bay which he called Paradise. [Kipling was effusive in his praise of places he liked. During his New Zealand stay, he decided Milford Sound was the Eighth Wonder of the World]. 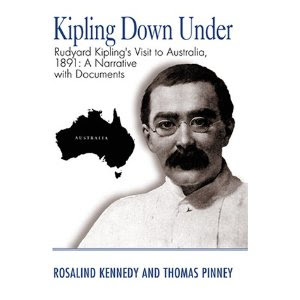 Kennedy & Pinney, Kipling down under : Rudyard Kipling's visit to Australia: 1891.
Note that the portrait on the front cover was painted by John Collier (1850–1934) in that same year that Kipling did his "small excursion" overseas.

It was not an entirely happy visit, according to Brief Encounters: Literary Travellers in Australia. Kipling got locals offside when he criticised Australians for having too much government for the size of population, for being too Labour in its politics, for tending to go on strike too easily and for not being cautious enough about the Yellow Peril on the doorstep.

His views appeared in print in Melbourne's most important daily newspaper, The Age, 13th Nov 1891. Needless to say, many Australians were displeased with the remarks of an outsider, a blow-in. But the press did constantly invade his privacy, and they published gossip about his private romantic life, so Kipling was also displeased.

Kipling paid a very short visit to Hobart. In later years Hobart would feature in his writing only in the poem he called Song of the Cities, in which sixteen cities in the empire were given a quatrain each. Kipling may not have loved the southern city, but he had taken a good deal of effort to learn its history.

Kipling had already left Australia when he received the news that his closest male friend, the publishing agent Wolcott Balestier, had suddenly died in London. He rushed home as soon as he could and married Wolcott's sister Carrie the very week he returned to Britain, even though he had loved Wolcott far more than he loved the sister.  Perhaps he felt guilty for not being there, when Wolcott needed him most. Perhaps Rudyard wanted to memorialise Wolcott's name (and genes) through their future children. 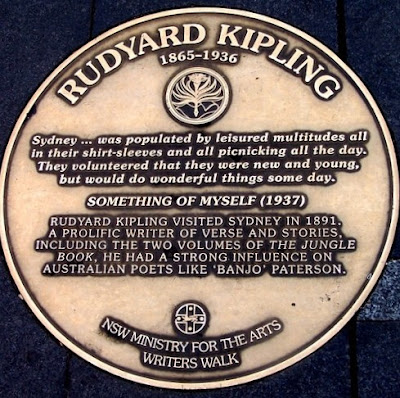 This trip to Australia was brief and largely, so Kipling might have expected to carry very little away with him in lasting feelings about the most far flung part of the British Empire. In fact, as his later writing established, he was deeply impressed by his stay. For decades to come, his work would be sprinkled with Australian references. In the Just So Stor­ies, which contain The Sing-Song of Old Man Kangaroo, Kipling gave a vivid impression of his travels from Melbourne to Sydney, and then from Melbourne to Adelaide, by train.

It was in South Africa’s Boer War (1899-1902), a full decade after his trip to Melbourne, that Kipling came to really like Australians, and his experiences with that group of soldiers left him impressed. He said he had never met "a cleaner, simpler, saner, more adequate gang of men". As a result, he wrote a beautiful poem Lichtenberg about a homesick Aussie soldier riding through a small South African, while thinking of his wattle-filled Hunter Valley home. A Sahib's War was another piece of writing that demonstrated Kipling’s respect for the Australian fighting man.


During the years of the Boer War, the various Australian states federated into one modern nation. Kipling discussed the news with his good friend Cecil Rhodes and decided that it was a great imperial coming of age.


Historians love a paper trail. I recommend the following books and documentary:
Posted by Hels at 8.1.11

who painted the 1891 portrait of Kipling? It looks very sensitive.

I like Collier, not just because he did Kipling's lovely portrait, but because most of his portraits in London's National Portrait Gallery are fresh, colourful and lively.

Very strange man Kipling. I knew of his experiences in America but had never followed him down under.

Hermes, agreed agreed. He was racist, against rights for the working classes and a supporter of powerful British colonialism. All I can say is, with regard to these values, he was definitely a man of his time.

Even for that period I suspect he was extreme. Sending his son to war when he could hardly see.

Great post, thank you.
It must have been quite an energetic trek to get to Apollo Bay before 'The Great Ocean Road' was built.

Wolcott's sister got married while mourning? ...

Rudyard Kipling was a difficult man.

After leaving Australia on 29th November 1891, Kipling had planned to spend Christmas with his family in India.

Alas on the ship from Australia to India, he heard of his closest friend Wolcott Balestier's sudden death in December 1891 and immediately decided to return to London. He telegraphed Wolcott's sister Carrie, proposing marriage from somewhere in the Indian Ocean.

Carrie Balestier and Rudyard Kipling were married in London 18th January 1892. Poor old Carrie tried very hard to please her grieving husband, but she went down in British literary history as a hard, bullying despot whose role it was to control her genius husband.

An interesting review of My Boy Jack can be found in The Idle Historian's excellent blog:
http://idlehistorian.blogspot.com/2011/01/on-kings-character-acting-and-bit-of.html

Apologies and thanks for the tip. I must have been half asleep when I wrote the post back in January 2011. Can you remind me the url of Peter Alexander's article and I will add it immediately.

https://www.artistsfootsteps.com/html/vcc_lornesketches_cover.htm
you have to flick back to first page to view all pages

Many thanks. I love peoples' responses to blogging as much as my own research and writing.