Bartitsu was a martial art form brought to Europe from Japan by Edward William Barton-Wright (1860-1951). Barton-Wright, an engineer, had spent considerable time in Japan during the 1880s and was keen to teach Britons non-aggressive self defence that did not require guns. He established a self defence club, called the Bartitsu Academy of Arms and Physical Culture, in Shaftesbury Ave London in 1898.

Like jujitsu, bartitsu used the weight and strength of the enemy being outbalanced by the hero. In a long article called "How to Pose as a Strong Man" published in Pearson's Magazine in 1899, Barton-Wright carefully analysed the mechanical and leverage principles involved - feasible even for an insurance clerk or a bank teller. Emelyne Godfrey showed that Barton-Wright’s exotic yet practical brand of self defence was much needed in 1890s Britain and certainly filled a gap in the market. Bartitsu was admired specifically because it used minimum aggression. 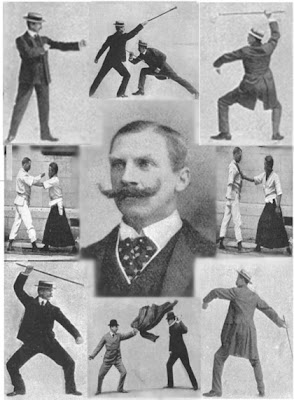 Baritsu needed only a walking stick, an overcoat and a knowledge of weights and balances. Barton-Wright was the gentleman with the very impressive moustache in the centre photo.

Meanwhile we will leap over to popular literature. By the 1890s Arthur Conan Doyle had created a monster with the adventures of his hero, Sherlock Holmes. So he killed off Holmes in The Final Problem (published 1893) at the hands of his arch-enemy, Professor Moriarty. The method chosen was rather ghastly and final - Holmes plunged to his death over the Reichenbach Falls while fighting.

However public opinion being what it was, Arthur Conan Doyle must have had a change of heart. In his book The Adventure of the Empty House (published 1901), Sherlock Holmes was brought back to life. Baritsu (note the different spelling) was the martial art that was used to explain how Holmes had managed to avoid falling into the falls with Professor Moriarty. Conan Doyle was himself a very keen boxer and had no trouble describing baritsu, in this 1901 book.

This came as a surprise to me, since I assumed Sherlock Holmes was a very intellectual fictional character. But the Bartitsu Society reported something very different.  As an athlete, Sherlock Holmes apparently focused on those exercises which strengthened the muscles and improved his cardiovascular system. He walked, hiked, wrestled and swam. He was an early advocate of both Hatha Yoga and scientific weight-training.  As a child in Yorkshire, he was informally schooled in traditional Gaelic stick fencing and was a natural at bare-knuckle fisticuffs. As an adult, Holmes was an expert singlestick player, boxer and swordsman!

Undoubtedly the Second Boer War (1899–1902) was a horrible time for the British and the reintroduction of a clever and successful Sherlock Holmes must have been good for the national morale. But it didn’t save Barton-Wright’s self defence academy which went into bankruptcy. Barton-Wright tried other adventures but none was hugely successful. He faded out of the limelight and eventually lived into obscure old age.


I can never tell if life imitates art or vice versa. Even if Barton-Wright was buried in a pauper’s grave unmarked and unlamented, bartitsu or baritsu became the basis for real martial arts that did so well in Europe in the 20th century.  But it was the fictional Sherlock Holmes' mastery of the mixed martial art that became legendary, not the real life academy in Shaftesbury Ave.

Masculinity, Crime and Self-Defence in Victorian Literature was written by Emelyne Godfrey and published by Palgrave Macmillan in 2011.
Posted by Hels at 25.12.10

I can just see a Victorian gentleman defending himself using this what about the Lady?

Emelyne Godfrey, in Masculinity, Crime And Self-Defence In Victorian Literature, noted that masculine violence became less and less tolerated in middle class men and all women. It was a sign of a lowly born ruffian.

The blurb on her book says "From the pistol duel to the Whitechapel Murders, the _self-defence scenario_ provided an avenue through which contrasting visions of masculinity could be explored".

By the way, there is no woman in the image. That looks like a martial arts outfit, not a dress.

The Bartitsu Club was unusual for its time in admitting female students. During the decade or so after the Club was founded, self defence for women (especially jujitsu, but also including the defensive use of the lady's parasol) became somewhat fashionable. The high points of the pre-WW1 trend included Emily (Diana) Watts' publication of "The Fine Art of Jujitsu", and then Edith Garrud's teaching jujitsu to the Bodyguard of the radical Suffragette movement.

Tony thanks for that.

I would love to have seen Emily Watts' publication of The Fine Art of Jujitsu, but perhaps you know the answer to my question.

Did Watts draw a specific link at all with Edward Barton-Wright? with his Bartitsu Academy of Arms and Physical Culture? or with Sir Arthur Conan Doyle's fictional characters?

Happy holidays to you :)

Another fascinating post. Thank you for all your hard work and thought provocation.
Happy Holidays.
Phillip

(and wish we had your 'winter', its damn cold here)

The most direct link was that Sadakazu Uyenishi was Watts' primary jujitsu instructor. Uyenishi was among the four Japanese jujitsuka brought to London by E.W. Barton-Wright. Thus, the jujitsu she learned was probably similar, if not identical to that practiced at the Bartitsu Club.

If you're interested, an electronic edition of Mrs. Watts' book is freely available via GoogleBooks.

Oddly, as far as I know there was never any allusion to the Conan Doyle/"baritsu" connection in period self defence literature. That connection doesn't seem to have been made until the mid-20th century.

By the way, while it's accurate to say that Barton-Wright pioneered Japanese martial arts in England, Bartitsu per se was actually an eclectic combination of jujitsu with British boxing, French savate (kickboxing) and the Vigny system of self defence with a walking stick. That cross-cultural eclecticism was many decades ahead of its time and is a major reason for the modern resurgence of interest in Barton-Wright's activities.

Given that Doyle had Holmes describe "baritsu" as "the Japanese art of wrestling", the consensus is that he was vaguely aware of Bartitsu but assumed that jujitsu was the extent of it; a misapprehension that was later repeated by several other commentators.

I'm glad you referenced Emy's book. Bartitsu.org will shortly be featuring an interview on that subject.

One further note is that Mrs. Watts later devised an eccentric system of physical culture (fitness and deportment) training, based in roughly equal parts on calisthenic jujitsu and on her studies of ancient Greek athletics. You might like to read my article on that subject at http://www.bartitsu.org/index.php/2010/05/the-martial-athletics-of-diana-watts/ .

Tony
you are a champion. It is information like this that makes blogging worthwhile. Thank you.

Hermes,
talking of making blogging worthwhile, martial arts is not a topic I would normally ever tackle. But Arthur Conan Doyle is a Victorian I come back to regularly in this blog. Isn't blogging grand?

Happy and healthy New Year to you both.

Helen -- There was a fascination in Europe with things Japanese after Japan's opening in 1868. The rich merchants of Britain's northwest, for example, collected Japanese prints (eg by Hokusai) and ceramics, some of which can still be found in the region's small public museums.

peter,
Thank you. I absolutely agree.

In Britain and France, in particular, we can see a delight with Japanese taste in woodblocks, paintings, prints, architecture, textiles, furniture and garden design etc. No doubt the World Fairs had a great deal to do it.

What I had not previously considered was that an interest in things Japanese might influence the NON-art world.

Hello Hels,
Thank you so much for all of your fascinating posts during the year.

I didn't realise that Conan Doyle was interested in martial arts! I like the series with Jeremy Brett but I haven't read any of the books yet. My husband loves to read them.

One of the best example of pre-WW1 "Orientalism" pertaining to both visual and martial arts was William Steers' home and jujitsu gymnasium in the Surrey Downs. Steers was a passionate Japanophile and his home/gym elegantly melded the English Arts and Crafts aesthetic with that of traditional Japanese art and craft. There's an illustrated article on that subject at http://www.bartitsu.org/index.php/2010/08/william-e-steers-and-the-hilltop-dojo/ .

Viola,
I didn't read Sherlock Holmes books OR Biggles books in primary school because they were for boys *ick*. But my husband certainly did! I was too busy reading Anne of Green Gables, Little Women, What Katy Did etc.

But even if we did read the books in primary school, it would have been a rather simple reading of the stories and characters. That is probably why I am finding Sir Arthur Conan Doyle so interesting now! Especially his belief in spiritualism.

And his belief in fairies. The Cottingley incident has all sorts of fascinating characters and points of great pyschoogical interest.

I was going to say to you yesterday that a great example of Japanese influence in the arts can be seen in the works of Christopher Dresser, the subject of my last post. He travelled to Japan and spent time there. But your example of William Steers is even better.

even his belief in fairies *nod* Conan Doyle was such a complex man, and he was living and writing in such a complex era. There are more PhDs yet to be written about him, I think.

Wonderful post! Always delighted to hear more tidbits related to ACDoyle, and that pic/moustache is phenomenal!

As you may gather from the name of my own blog, I am quite fond of ACDoyles most famous creation - I felt a pang of guilt recently when I was told a google search for 'Three pipe problem' finds my site first, and then the Sherlock quote from Red Headed League. My apologies Mr Doyle!

H Niyazi,
I understood the Three Pipe reference, but I would not have guessed you were a secret Sherlock Holmes fan :)

I have added a reference to a topic you may well know about already.

Hermes has an article about Eugen Sandow single-handedly changing the way Britons thought about physical fitness. And as Conan Doyle had been following Sandow's training methods for several years, the regime left the novelist in superb physical condition.