Modern art destroys British morals, 1910! Read all about it!

Modernist art from the Continent was not seen very often in Britain, at least in the years before World War One broke out. Durand-Ruel DID bring beautiful Impressionist art to exhibit at the Grafton Galleries in 1905; although people greatly admired the works, the paintings weren’t sold. An Exhibition of the Works of Modern French Artists was presented by Robert Dell at the Public Art Gallery of Brighton (in 1909?) but I cannot find its catalogue or list of paintings.


It should be noted that after the turn of the century, Impressionist art was hardly cutting edge any more, at least not in France. So Roger Fry, Bloomsbury art critic extraordinaire, decided he was going to launch modernist art on the unsuspecting public of Great Britain. With his many contacts in the art world, Fry asked leading collectors in Europe to lend him their paintings; they did! Better still, many of the works were for sale. Modern art dealers were more than eager to break into the British market, and willingly gave him paintings on consignment. 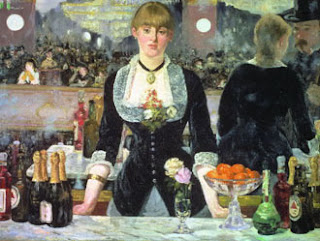 Edouard Manet, Bar at the Folies-Bergère, 1882, now at Courtauld.

Roger Fry asked another Bloomsburyite Desmond MacCarthy to become the secretary of the huge project. I know the Bloomsburies tried to help each other socially and professionally, but did literary critic Desmond MacCarthy have any knowledge of the visual arts?

Desmond accepted Fry’s offer. He and Clive Bell were soon travelling to Europe, visiting Parisian dealers and private collectors, arranging an assortment of paintings to exhibit at the Grafton Galleries. Even if Desmond had been familiar with C19th art, his was a tricky assignment, acquiring the work of modernists little known in Britain. The Art World said that Desmond’s biggest success was in negotiating with Van Gogh's sister-in-law, Madam Gosschalk-Bonger, for the Van Goghs they eventually exhibited. 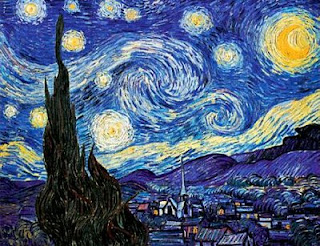 Roger Fry was actually defining Modern Art by his selection process. The modern (post-1890) French masters and their colleagues eg Cézanne, Gauguin, van Gogh and Seurat, were clearly not Impressionists. But what were they? While preparing for the exhibition, Desmond MacCarthy noted that they had no shorthand way of describing the art era they were analysing. “Post-Impressionism” was the label quickly created by Roger Fry, the label subsequently adopted by art historians and gallery staff. For Clive Bell the term meant moving past Impressionism and denoted a careful move away from natural representation. Instead Post-Impressionism described a move towards symbolic meaning, bold, unrealistic colours and expressive brushstrokes. Pictorial structure and the symbolic use of colour and line became the themes of the 1910 exhibition.

In Nov 1910, Fry announced that The Manet and the Post-Impressionists Exhibition would open at the Grafton Galleries in Mayfair. He also commissioned a very smart poster, to attract interest. Fry feared that most British art critics in 1910 STILL thought that Monet couldn’t draw and that Renoir didn’t tackle serious subjects. What would they do when they saw the artists Fry, Bell and MacCarthy had brought over the Channel!

So there was certainly some awareness of the risk Fry and his Bloomsbury mates were taking. If I had been in Fry’s position, I might have concentrated more on the Fauvists (1905-7) who created brilliant, luminous colours and bold, spontaneous handling of paint. He did exhibit plenty of Matisses, but Derain, Vlaminck, Rouault and van Dongen may have been a more gentle introduction to modernism than, say, Picasso. 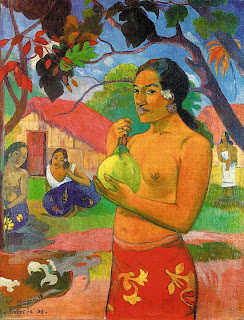 Paul Gauguin, Woman Holding a Fruit 1893, now in The Hermitage.

This exhibition had been pulled together quickly, but if ever there was a flashy art exhibition, this was it - Manet and the Post Impressionists was arguably the most significant and the most controversial show of paintings ever to be held in pre-WW1 Britain. In this landmark exhibition, there were more than 20 paintings by each of the most important artists – Manet of course, but also Gauguin, Matisse, Van Gogh, Cezanne, Seurat and Picasso. I would love to know specifically which of their paintings were displayed – only Manet’s A Bar at the Folies-Bergiere has been identified for me with certainty.

How did the professional critics respond? The reviews were mainly ugly. The critic for The Pall Mall Gazette described the paintings in the Post Impressionist Exhibition as the output of a lunatic asylum. The Morning Post critic Robert Ross thought that only psychiatrists interested in psychoses would be interested in the thoughts of this particular group of artists; Sir William Blake Richmond wrote in the Morning Post, “Cézanne mistook his vocation; he should have been a butcher”. The art critic of The Daily Telegraph had a hissy fit, throwing down his catalogue at the door of the catalogue and stamping on it. One traditionalist artist went as far as warning young men not to enter the gallery for fear of being horribly corrupted by what lay within.

The popular press almost universally supported this view: the exhibition was dangerous! According to the tabloids, the modernist artists couldn’t draw or paint; the colours were obscene and the works were an offence against British culture.

But ordinary art lovers seemed to love the sense of modernity that was finally coming to British shores. Over 25,000 paying customers crowded into the West End Gallery. Fellow Bloomsbury artists Duncan Grant and Vanessa Bell were of course very enthusiastic about the exhibition. More interesting for readers of this blog was that the exhibition powerfully affected the work of some of the painters in Walter Sickert's circle, the Camden Town Group. The paintings showed these young British artists that the use of strong, flat colours could be expressive.

Burlington Magazine concluded: “While the exhibition did not make its leading artists household names overnight, it prepared the ground for their eventual canonisation over the following decade. Gauguin, whose work escaped the worst excesses of critical abuse, became a figure of romance and rebellion; Van Gogh was the deranged genius of popular imagination; and Cézanne, from being an incompetent bungler, rapidly assumed shaman-like status in the development of Modernism”. 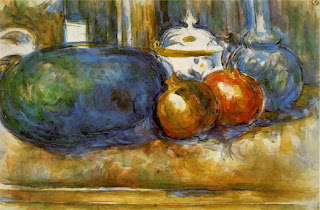 Despite the hostility expressed by traditionalist art circles, or because of it, Fry was soon hailed as a champion of modern art and he became a focal point for the avant-garde. He decided to follow up the first Post-Impressionist exhibition with a second one. Patronised by Bloomsburyite Lady Ottoline Morrell, The Second Post-Impressionist Exhibition opened in 1912, also in the Grafton Galleries. This was broader, more consistent and more modernist than the first, and included several Cubist works (perhaps for the first time in Britain). And two extra nations were represented. A local section, chosen by Clive Bell, displayed paintings by Bloomsbury artists like Duncan Grant and Vanessa Bell. And there was a Russian section organised by Boris Anrep. The 1912 exhibition was fortunate; the sense of outrage in Britain had become muted in the intervening few years since the first Fry blockbuster.

Fry also founded the Grafton Group in 1913, providing local artists with the opportunity to exhibit any work they were creating in the post-impressionist style. Even during WW1, Fry organised major exhibitions that brought modern works of art to London, like The New Movement in Art.

I'm one of the few people that don't like Impressionists art but I have always loved Bar at the Folies-Bergère by Manet. I did a pastel copy of it when I was a child.

Things haven't changed much in this country - certainly not in the popular press.

Andrew
You were in good company :) Lots of people didn't admire Impressionist art. Manet, however, was different - he was a powerful artist and never went along with the rules of impressionism.

My theory about Impressionism was that by 1910, people had got over its shock value. In fact its shock value had run out some 25 years earlier! If people were going to be shocked into speechlessness in 1910, it had to be by something more modern and more horrid.

isn't that the truth!

And it was true at the Herald Art Exhibition of Contemporary British and French Art, 1939! Australian mothers were being told to cover their kiddies' eyes by the popular press, lest the Van Goghs, Cezannes and Picassos led the children to insanity and alcoholism.

Nothing much changes. Mind I'm not a great fan of Tracy Emin and her ilk.

Manet's "Bar..." and and "Olympia" always fascinate me for his play with the female gaze - his women presume male gazing privileges. I wonder if the Brits were reacting, in part, to such female presumptiousness.

Chris,
interesting suggestion.... that even Manet was marginally provocative. I had always thought of Manet as utterly sound, even when the Impressionists as a whole were considered lunatic daubers.

Roger Fry might definitely have been provocative himself in mounting this exhibition, but I had assumed he put Manet in the title _simply_ to pacify the traditionalists.

This is remaining a stubbornly interesting topic :)

Hermes
there is "rock the staid world" and then there is MODERN :)

Bookride said that when the middle aged artist, curator and writer on art Roger Fry began to assemble paintings by the greatest names in the modern French school, the work of Cezanne, Seurat, Van Gogh, Matisse, Picasso etc had never been exhibited in the UK. Some of their names were known to art lovers, but a trip to the continent was necessary to view their paintings. Fry meant to change all that with a show that would rock the staid world of salon art and Royal Academy annual exhibitions.

many thanks!! The best part of blogging is not repeating what _I_ already know, but joining in with others to expand that knowledge base.

This very useful post, here read more about this.

Many thanks. It is a year since I thought about this topic yet it is still fresh and influential. What would you give to be able to visit the The Manet and the Post-Impressionists Exhibition, in 1910 of course. Not now.

Homage to Manet was an exhibition held at the Norwich Castle Museum and Gallery from January-April 2015. It explored the influence of one of the most important and controversial artist of modern times, the French artist Édouard Manet (d1883). Focusing on the period from 1860-1914, the exhibition comprised 40 works from Manet, Sicket, Steer, Sargent and others, on loan from Britain's public and private collections.

Thank you. I still believe that Fry's "Manet and the Post-Impressionists" Exhibition in 1910 was a definitive moment in modern art. What a perfect time for my new post on Manet, the French Impressionists, the British modernists, Roger Fry and Virginia Woolf.