I came across the book called The Great Silence, written by Juliet Nicholson and reviewed in An Edwardian State of Mind. Nicolson’s title invoked the introduction of the two-minute silence on the very first anniversary of Armistice Day, a constant reminder in British Empire countries of the appalling sacrifices made by the war dead.

The years 1918 to 1920 were chosen by the author since this was the time between a] the last of the Great War battles in November 1918 and b] the internment of the unknown soldier in Westminster Abbey in November 1920. She avoided the historians’ techniques of analysing military and political narratives, and concentrated instead on the suffering of individual families.

My own grandfather was a soldier in WW1 who, although he returned to his family, had a bullet lodged in his kidney; he was in and out of hospital for the rest of his life. I know about family records, oral histories, photos, letters, diaries and financial crises! 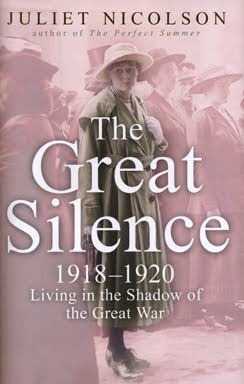 Nicolson began with the armistice celebrations on 11th of November 1918. On one hand there was a huge national party, full of music, hugging men in uniform and eating whatever food could be placed on the trestle tables. On the other hand, the day was the start of a national agony for millions of ordinary citizens in Britain and the British Empire (and, I suppose, in the other countries who lost so many young men).

As Feminist Review noted, hostilities would fester for a lifetime for those who would never see their husbands, sons or fathers again. Even for those soldiers who returned home alive, the armistice offered little consolation to those who were marked by war forever, with their missing legs and their scared faces.

Some people tried very hard to avoid the ex-soldiers who clearly displayed the misery of war. We know, for example, some soldiers were so severely mutilated that passengers got out of their train seats and moved to other carriages. But it was everywhere - those physically damaged by the fighting could not be locked away in asylums or prisons.

Some evidence in the book was very practical. I was particularly inspired by a heroic New Zealand plastic surgeon, Dr Harold Gillies, a man who had worked in France during the war with the Red Cross. With a team of artists and sculptors back in Britain, he developed many techniques of plastic surgery on 5,000+ soldiers with facial injuries. Gillies slowly and carefully rebuilt the human wrecks he met in his Queen Mary’s hospital, and gave them new lives.

Why were facial injuries so common and so awful? Apparently the government’s compensation scheme for lost limbs did not extend to anything above the neck; they didn’t acknowledge the paralysing emotional affects of facial disfigurement. Nor did they take account of men who had lost the ability to speak, swallow, see or even breathe normally through their facial injuries.

But in the end, it was not the practical responses that made the book special. It was the fact that Nicolson captured a grief that most ordinary citizens were unable to articulate in those early post-war years. The silence in the title, therefore, may refer not only to the official two minutes when people stood at attention and hung their heads in memory.

There was one major criticism that appeared in some of the reviews. Miranda Seymour noted that the author is the granddaughter of Vita Sackville-West, an aristocrat brought up in one of the grandest houses in England. This by itself is a good thing, but if many of Nicolson’s sources derived from her rather exclusive aristocratic world, the men from ordinary homes might have been covered with less energy than they deserved. 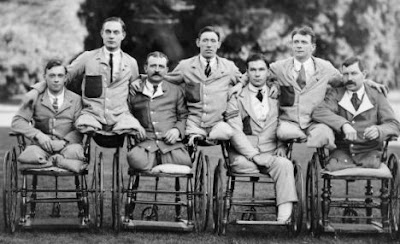 Perhaps in the end, nothing could make up for the wasted young lives, lost or maimed. As The Idle Historian so rightly noted: While the end of the war was framed by politicians as a great victory and final vindication of the just cause, ordinary families across the Empire were still filled with shock, disbelief and anger at the years of hardship and the slaughter in the trenches. And in the end, the War To End All Wars ... wasn't.
Posted by Hels at 23.8.10

As my brother noted recently, when I was asking him about our grandfather's experiences in the "Great War", anything to do with WWI makes his blood boil.

War is completely and utterly dreadful, futile, and mostly not worthwhile, as our generation is learning from the stupidity of our involvement in Iraq and Afghanistan. Herewith two more examples of stupidity and futility by those who got us into them, and who now can enjoy the fruit of their labours in comfort and extreme wealth. (Bush, Cheney, Blair etc.)

Columnist,
I too find the idea of wave after wave of teenage boys running up a slope, with machine gunners at the top mowing them down, repulsive. If they didn't leave the trench to run to their certain death, their own officers charged them with treason and then shot them anyhow.

My grandfather did not have to be conscripted - he went voluntarily and willingly. In fact he was marginally under age, so he faked his guardian's signature in order to enlist! What insane dedication to a tragic cause :(

He came back a severely wounded man, a socialist (which he always was) and a pacifist (which he had not been before he enlisted).

We should use our 2 minutes silence more wisely.

No doubt Frenchmen on the other side of the channel suffered similar facial injuries. I wonder if any of them ironically thought about Gaston Leroux' earlier novel, "The Phantom of the Opera," (first published as a series from 1909-1910). Such ex-soldiers might have had more empathy for Erik, the disfigured protagonist in the story.

M,
The timing is ironic, isn't it? Even more so, since the Edwardian era was thought of as golden, progressive and untainted by the horrors of war.

Everyone, military and civilian, understood the tragedy associated with losing a young son, husband or brother. But The Great Silence's contribution was in talking about the tragedy, personal and national, for young men who actually survived the war. And their families.

Sounds like a worthwhile book to circulate. The story sold to me was that the WWI soliders came back from war unbowed, certain of moral victory unlike later wars. It never rang true.

I hadn't realized people had done plastic surgery for so long.

Not only were the young men said to be confident of their moral victory. Lloyd George made a very clear promise that his government would make post-war Britain "a fit land for heroes to live in." That never rang true either.

Unemployment in the post-1918 period rose rapidly and wages for the employed were inadequate. Perhaps that would have happened anyhow. But ex-servicemen, even the seriously wounded, often found that medical tribunals discharged their disability rights far too soon. They became dependent on soup kitchens and street charity :(

An utterly futile and pointless European war that was only used to test the mettle of both Germany and the Allies. That the rest of the world was brought into an imature European squabble is disgraceful. The effect it had on ordinary people around the world for most of their lives, should be seen as one of our most shameful episodes.

John, would you agree that there were very few coherent anti-war voices heard in the public domain. especially in 1914 and 1915?

In fact conscription in Australia, which was voted down the first time (in 1916), eventually got up in a revised form. Despite families having lost tens of thousands of their beautiful young sons in 1914-5, voters later allowed the government to FORCE boys to join up.

This is probably what Nicholson meant by the the grief that ordinary families were unable to articulate, a pent-up horror that failed to express itself philosophically.

From a British perspective it was very much a popular war, at least to start with. Young men enthusiastically joined up in groups, so you would have amateur clubs and organizations that would all join up together in order to give the Kaiser a bloody nose. They obviously didn't know what they were letting themselves in for.

I don't think that anyone would have dared raise a voice of protest as the jingoism seemed rife at the time. However, there were always the Quakers who refused to take part in the fighting and even though often branded as cowards, they were in fact extremely brave and retrieved countless injured from the battlefields.

I had no idea that Australia was so unenthusiastic, as we are all led to believe that Empire subjects were more than happy to serve the Mother country. Perhaps yet another case of the Mother country furiously embroidering the truth.

I've often thought that it was the ever-present horror of the Great War that influenced the so-called Appeasers. It is easy now to criticise those who tried to prevent a war with Hitler, because we know the wickedness of the Nazi regime, but back then, many people must have thought that they were just being conned by warmongering politicians all over again.

I wonder if historians can ever properly analyse an earlier era through their own modern eyes, even though they realise the dangers.

Nicolson tackled that problem by concentrating on the suffering of individual families, as expressed in contemporary records. But you are so right. The Great War was to be the War That Ended All Wars.. people HAD to believe that was true.

young men in Australia and New Zealand enthusiastically responded in 1914 in droves... there weren't enough recruiting officers and training officers to deal with them all. Their mothers were told the lads would be home by Christmas 1914.

By 1916 the volunteers had been killed, injured or exhausted, and both countries had to turn to conscription instead. The moral nightmare only started with conscription.