I was already familiar with Sarah Bernhardt’s (1844–1923) image via young Czech artist Alphonse Mucha (1860-1939). After moving to Paris, Mucha created an Art Nouveau poster in 1884 to advertise Bernhardt's role of Gismonda at Paris' Theatre de la Renaissance. This poster broke new ground in the art poster world, and within a week of printing, Mucha became a very well known artist in Paris. Sarah Bernhardt loved the poster, and signed Mucha to a 6-year contract. During that time, Mucha designed other posters for her and became very close to the theatrical legend.

Bernhardt was also a keen fan of photography,  using the most modern 19th century technologies available to get her image out to the public.

Bernhardt as Gismonda, created by Mucha in 1884, Paris

By the time the Divine Sarah Bernhardt arrived in Australia in 1891, she was the most famous actress in the world. The Pall Mall Gazette in July 1891 noted that the 46-year-old star’s arrival in Sydney emptied State Parliament and caused wild scenes at Redfern station where she was received with extraordinary honours. The Mayor left his duties to meet her and took her to an official reception. The harbour was decorated as if for a regatta, and the town was illuminated at night.
*
Everyone cashed in on her trip to Australia. The fabulous Australia Hotel, whose foundation stone had been laid by the state premier Sir Henry Parkes just two years earlier, asked Sarah Bernhardt to perform the grand opening. Her name was first in the new hotel register, later displayed in a glass showcase in the main foyer. 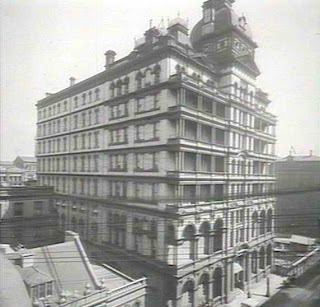 Impresario George Tallis was closely associated with the JC Williamson firm for 50+ years. While concentrating on the business side, Tallis learned every aspect of theatrical management, from choosing costumes to handling international stars. Enticing Bernhardt to do a tour of Australia in 1891, Tallis said, marked the high point in his early career and led to his later fame and knighthood.

The newspapers were agog. The Melbourne Argus in Sep 1890 told its readers that JC Williamson has concluded an agreement with Mme Sarah Bernhardt and company, who would visit Australia for a theatrical season of 10 weeks. She would first appear in Melbourne in June 1892. The plays to be produced would include M. Sardou's drama Cleopatra. In July 1891 The Argus wrote  "Madame Sarah Bernhardt opened the Sydney season to night at Her Majesty s Theatre in Camille. The house was crowded by a brilliant audience, who, though somewhat impassive during the first act of the play, were gradually warmed to genuine enthusiasm, and rewarded the magnificent performance of the great actress by thunders of applause. Tomorrow La Tosca will be produced". 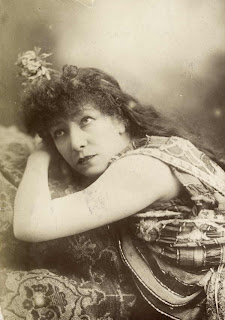 During the Sydney leg of her tour, Bernhardt performed in Camille, La Tosca, Fedora, Jeanne D’Arc and Cleopatra. Her performances at Her Majesty's were in French, so Sydney audiences were provided with English translations via booklets. They followed the play using these booklets. This meant that the house lights were not lowered during the performances. Despite the language difference, Sydney theatregoers rapturously received Sarah Bernhardt. As in France, her costumes were sublime.

At the very same time, Australia needed help to end the appalling rabbit plague and Professor Louis Pasteur sent his brilliant nephew Dr Adrien Loir (1862-1941), a handsome young scientist, to represent the family business – the Pasteur Institute. Apparently Dr Loir needed a translator since he didn’t speak English well, so Bernhardt offered her services (sic)! Bernhardt, aged 47, was already a legendary lover with a particular interest in much younger men. She took one look at young Dr Loir and instead of going on to fulfil her contractual obligations in Brisbane, the couple had a passionate romp for a week on the tiny Rodd Island in Sydney Harbour.

In time, the lovely Bernhardt returned to France alone, but clearly island life had started to appeal to her. At home she bought a Napoleonic fort on the lovely Belle Isle off the coast of Brittany where she spent holidays for the rest of her life. When the star died in 1923, half a million citizens lined the streets of Paris to bid farewell to France's most beloved heroine.

Read Sarah: The Life of Sarah Bernhardt, written by Robert Gottlieb and published by Yale UP, 2010. And read EdwardianPromenade for some of the gossip that surrounded her early adult life.

It is just as well she did her romping in Australia. At 70 she injured her leg when performing Victorien Sardou’s play Tosca, in which she was the heroine who finally hurls herself off a castle wall to kill herself in despair. She tried wearing a cast but that failed;  the Divine Sarah then decided she would be better off without the leg altogether. She wrote to one of her lovers, the surgeon Samuel Pozzi, telling him to cut it off above the knee. Even then, wooden legs failed her, so she was carried around on a sedan chair for the rest of her life, including on stage and on tour.

I can't imagine throngs of theatre goers today going to see a play in French, with a printed translation. Glad to learn about Bernhardt the would be translator.

Another fascinating post. I keep telling people that there were celebrities long before tv and Hello Magazine.

Thanks chaps. Not only was Mme Bernhardt a living legend as an actress.. she was a huge attraction off the stage. You might have thought Australia in the 19th century was out of the European loop when it came to theatre, but clearly not.

It would have been so exciting! I wish that I could have seen her.

I read a few biographies of the 'divine Sarah' a long time ago, but I don't think that there was much about her trip here. Thank you very much for a very interesting post.

Viola, there is so much we don't know about our own history. I had never heard of Rodd Island before *blush* and didn't know the world famous Pasteur Institute had a laboratory there for a time.

I've been a fan of your blog for awhile, after stumbling upon it a few months ago. Thanks for the great content!

We here at Bestcollegesonline.com take good content seriously, and we recently published an article “100 Historical Sites Every American Should See”that you may be interested in sharing with your readers. For your convenience, here's the link: (http://www.bestcollegesonline.com/blog/2010/06/30/100-historical-sites-every-american-should-see/) if you'd like, you can also find the story on our blog home page.

I hope you enjoy it. Thanks for your time and take care!
Alan Wood

A great post, and I can see why Sarah liked the poster, it's wonderful!

I suppose that the reception that Bernhardt recieved has much to say about celebrity. Bernhardt was obviously highly talented and worked hard her career, and was therefore admired as a celebrity.

Today we have so many 'celebrities' that it appears that at some point in our lives nearly everyone will be one in some form or another.

I must admit to being slightly envious of those who saw Berhardt and others like her, rather than the many vacuous celebrities we are faced with.

I have added a reference to the newest Bernhardt biography to come out (in late 2010). It may be interesting to have a look at.

History Today did a 100th anniversary review of Sarah Bernhardt's right leg which came off in 1915. I have added a note into the blog above.

Thank you for your blogpost, which I discovered when looking for information about Sarah Bernhardt's 1891 tour and particularly her season at Her Majesty's Theatre in Sydney from 8-11 July 1891. I have been investigating a museum collection in rural NSW and have found a poster for the season. I wonder if you have come across one of these anywhere and whether they are now rare.

She was amazing! I easily found modern reproductions of the 1891 season in Sydney, but original posters are much harder to find. The Mitchell Library in Sydney has one, Lawsons Auctioneers had one recently etc.

The Williamson Collection in the National Library Canberra is the place to ask. JC Williamson and George Tallis collaborated on the Bernhardt tour and have all sorts of posters and photos in the collection. They also have Corille Fraser's book "Come to dazzle: Sarah Bernhardt’s Australian tour" which may have useful information for you.

can I please point you to my book "Come to Dazzle: Sarah Bernhardt's Australian Tour" published by The National Gallery and Currency Press, 1997, obviously before the advent of blogs and websites and social media. It takes a very different viewpoint relying mainly on the available print media of the time.

You may be interested in my website corillefraser.net.au I have caught up with the technology but confess that I thought I had found everything available on the lady and didn’t think to consult the Internet for updates. Thank you for the new insights.

many thanks for the link. I cannot find your blog, so I have added your book's synopsis from AbeBooks:
The Divine Sarah, recognised as the world's greatest actress, is at the centre of this book, but the story it tells is much wider. Corille Fraser's lively writing and her eye for the apt contemporary quotation transport the reader to Sydney, Melbourne and Adelaide in the late C19th where J C Williamson presented sell-out seasons. The book captures the theatrical climate of the day showing the public response, the critical debate, the management and commercial arrangements, the costumes, the other players and the touring conditions for a large company with 200 tons of scenery and costumes.

Thank you Hels.
Try corillefraser.net.au
Come to Dazzle is out of print but is available in libraeiws and on Amazon.