Dylan Thomas 1914-53 was born in Cwmdonkin Drive in the wealthy part of Swansea, South Wales and his childhood was largely spent there. His education was at a Dame School not that far from home and then onto Swansea Grammar School. He left school at 16 to become a reporter for the local newspaper and soon joined an amateur dramatic grp in Mumbles, but still continued to work as a freelance journalist. When he wasn’t writing, Thomas spent his days visiting the cinema and theatre in the Uplands, walking along Swansea Bay and drinking in all of Swansea's pubs. 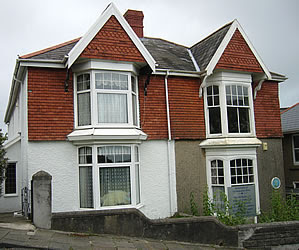 Thomas was also a regular patron of Kardomah Café Castle St in the centre of Swansea, a short walk from the local newspaper where he worked. It must have been a very exciting place for a young, want-to-be writer, particularly as a literary and artistic circle started to meet in the Kardomah Cafe in c1930. The poets, musicians and artists who gathered there became The Kardomah Boys. Dylan Thomas’ footprints are all over Swansea.

Why did it take so long for Swansea to recognise its most famous son in monuments, theatres, houses and pubs? Firstly from 1932 on, Thomas was outside Swansea more than he was in Swansea. As he became more famous, he lived in London. Later he had a house in the village of Laugharne in Carmarthenshire, West Wales. A number of times he went on extended visits to New York.

Secondly, in February 1941, Swansea was bombed by the Luftwaffe in a 3 nights' blitz. Rows of shops, pubs and buildings, including the iconic Kardomah Café, were destroyed. Thomas later walked the bombed-out shell which was once his home town centre; he himself thought that his old Swansea was dead. Fortunately for Swansea historians, the Kardomah Café later reopened on Portland St, not far from the original location. 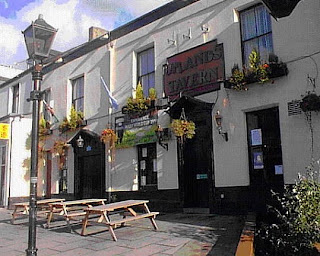 Finally Dylan Thomas was a difficult citizen and my guess is that the good burghers of Swansea had had enough of his antics. By the time his highly acclaimed first poetry volume, 18 Poems, was published in December 1934, Thomas was already a heavy drinker. Even when he married Caitlin MacNamara and had three children (born 1939, 1943 and 1949), he and Caitlin binged and brawled their way around any pubs that were open. The children raised themselves in neglectful chaos. The young couple spent an inordinate amount of time and money in the late 1930s and 1940s drinking, so there was never enough money for ordinary family expenses. Needless to say, at the outset of WW2 Thomas was classified as too sickly to fight, suffering from chronic bronchitis, asthma and alcoholic damage.

But alcoholic or not, Thomas really did become famous, within Britain and elsewhere. Thomas was well known for being a dynamic speaker, best known for his poetry readings. His powerful voice captivated American audiences during his speaking tours of early 1950s. He made 200+ broadcasts for the BBC, including his best single work, Under Milk Wood, a 1954 radio play based around the inhabitants of a boring small Welsh village. Thomas' poems, And death shall have no dominion (pre war) and Do not go gentle into that good night 1951 became very well respected. When Richard Burton starred in the first broadcast of Milk Wood in 1954, the audiences couldn’t get enough of sexy Welsh males.

Dylan Thomas died in a New York hotel in November 1953, just after his 39th birthday. His body was brought back to Wales for his burial in the village churchyard at Laugharne, in the presence of his mother and his wife.

Thomas wrote half of his poems and many short stories while living at 5 Cwmdonkin Drive Swansea. The house has been recently restored to the tastes popular when bought by the Thomas family, and is available for house tours. Another monument stands in Cwmdonkin Park, one of his favourite childhood leisure areas, close to his birthplace. The memorial is a small rock in a closed-off garden, inscribed with poetry and set within the park.

Walk or ride along Swansea Bay's 8ks promenade which is still lovely to look at, and breathe the invigorating sea air. The tax payers of Swansea started creating a Memorial Thomas Walk in this very Maritime Quarter. The yacht marinas, museums, art galleries, a theatre, bars, restaurants, an observatory should all be visited. Stone sculptures and bronze statues dot the area, including a statue of Thomas’ seafaring Captain Cat and a statue of Thomas himself in front of his theatre. For great images of the port area, see Contested Terrain blog. For a very useful guide to 3 days in Swansea, see Wales Cymru blog. 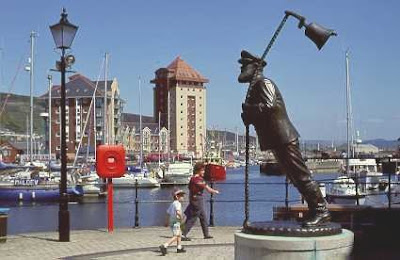 Dylan was a member of Swansea’s Little Theatre in the early 1930s, when they were based in Mumbles. The Little Theatre has its own exhibition as a tribute to Thomas. Apart from this theatre, performances of his work can also be seen at the Dylan Thomas Literature Centre (formerly the town's Guildhall and reopened in 1995) and during an annual festival each October. The Swansea Museum has a permanent exhibition on Dylan Thomas and his life, as well as a bookshop filled with his works. The Dylan Thomas Theatre is at the edge of Gloucester Place/square at the marina. In 2004 a new literary prize, Dylan Thomas Prize, was created in honour of the poet and is awarded to the best young published writer. Following this, in 2005, the Dylan Thomas Screenplay Award was established, run by the Dylan Thomas Centre and given at the annual Swansea Bay Film Festival. 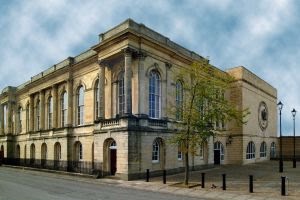 Several of the pubs in Swansea also have associations with the poet. The Queen’s Head claims it is one of the few remaining traditional pubs in Swansea, and was a favourite haunt for Thomas when he worked as a cub reporter at the South Wales Evening Post newspaper. The Uplands Tavern boasts the Dylan Thomas Snug, where the writer used to sit.  One of Swansea's oldest pubs, the No Sign Bar, was another of his favourites and was mentioned in his stories. The seafront pub, Antelope, which stands in the famous Mumbles Mile, is looking decrepit. This old pub, complete with its open fire and 1930s architecture, will be renovated with its Thomas memorial material in situ. Having a Thomas association is very good business for a Swansea pub.

Hello Hels
I enjoyed your very informative post on Dylan Thomas. Thank you for the link to my blog. Yours is a very interesting blog and I will continue to look in.

Thank you very much for this fascinating post. I'd love to go to Swansea one day and walk in the footsteps of Dylan Thomas. I must say that I understand his lines about old age more and more as I get older!

Being "very good business" seems to bring on much sentiment and reverence for the past. My home town discovered its Celtic roots when all things Celtic were very popular and lucrative. Those roots were genuinely there, but had been somewhat supressed before they were all the rage.

Great to see more about Dylan Thomas. We have just formed the Dylan Thomas Experience and aim to bring together all thats good about the great man.
Take a look at http://www.dylanthomasexperience.co.uk
We aim to launch this project on 1st March 2010

Mike,
when I was doing Literature in high school (many decades ago), we were given the works of Byron, Keats, Shelley, Worsdworth etc, but never Dylan Thomas.

Now it cannot be that he was too modern, because I loved Kipling, Shaw and Conan Doyle, so it must have been because he was such a Naughty Boy.

I hope your Dylan Thomas Experience goes very well. I suspect this generation of readers will be delighted to delve into a Thomas Pilgrimage.

Lovely, timely. We listen to a DT on vinyl every Christmas eve reading A Child's Christmas.

Examine the March April 2014 edition of Discover Britain Magazine. There is a delightful trip down the pilgrimage trail, exploring the Ceredigion seaside town that inspired many of Dylan Thomas' best loved works. The photos are also lovely.

Have a look at Heather on Her Travels, especially about the new-ish Dylan Thomas Centre and its giant exhibitions.

We are now at the mid point of Dylan Thomas' Centenary Celebrations with his words reverberating from Wales around the world. Examine the programme at http://www.dylanthomas100.org/media/182234/DylanThomas100Summerprogramme.pdf

excellent! I wondered about the Australian connection to the Centenary Celebrations and found the following:

"Sydney has become strongly associated with the Thomas family.
Both of Dylan’s sons, Llewelyn and Colm, lived in Sydney for years. Dylan’s daughter-in-law, Louise, and eldest grandchild, Jemima, both still live in Sydney. And this is the city where the first Dylan Thomas Society outside Britain was established and still thrives."

Throughout 2014, the centenary year of Dylan Thomas' birth, there are organised tours, symposia and festivals across the important Thomas sites. Read through our comprehensive guide to the events taking place to mark the occasion:

"Dylan Thomas: A Centenary Celebration" is a collection of specially commissioned essays celebrating the poet's life, 100 years after his birth in 1914. Edited by his granddaughter, Hannah Ellis, the book is divided into three parts concerning Thomas's early years, later life and his lasting legacy.

In Thomas' shed in Laugharne, he wrote Over St John's Hill, Do Not Go Gentle, Poem on His Birthday and the play Under Milk Wood.

The original shed stands at the Boat-house where Thomas' fans can witness through a glass screen a scene left as if the author might return at any moment. From there it is a short walk to St Martin's Church to visit the grave of Dylan and his beloved wife, Caitlin.

What a peaceful location to write in... many thanks.

The historic house at 5 Cwmdonkin Drive Swansea has been converted into a B & B. The owner Geoff Haden leads tours around the house and allows Dylan fans to sleep in the writer's bedroom and sit at a writing desk that has been restored to its 1914 heyday.

Excellent! I knew the Cwmdonkin Drive house has been restored to the life style enjoyed by the Thomas family back in the early years, but I did not realise it was now a B & B.

Dylan Thomas fans will be pleased to hear that Literature Wales has declared that May 14th 2015, shall be the first annual Dylan Thomas Day. It's a day to remember the brilliant Welsh writer and poet, and drink a toast in his honour. In honour of the occasion Literature Wales is publishing A Dylan Odyssey, an illustrated book which is based on the the organisation's popular literary tours which visit places associated with the poet.

Many thanks. For those people who couldn't get there this May, I think the illustrated book is an excellent idea. I will see that our TAFE library has/gets a copy of A Dylan Odyssey.